With Christmas a week away, many folks may be planning on turkey for their big holiday meal.  And with our entire nation in need of a little comfort food, a dish that is both comforting and incorporates leftover turkey hits the spot.  Bonus — this version is much lower in calories and fat than the traditional pot pie, without sacrificing any of the flavor.  We adapted the original recipe (found in Cook’s Illustrated’s magazine “Light & Healthy 2012“) by using leftover cooked turkey rather than poached chicken breasts.  Calling this dish “pot pie” is a bit of a misnomer, considering that the recipe calls for a crumble topping — made with flour, Parmesan cheese, baking powder, baking soda, salt, pepper, cayenne, buttermilk and butter — instead of the usual pie crust.  Rather than “turkey pot pie,” think of it more as “turkey cobbler,” in terms of the consistency of the finished dish.  The filling is similar to the traditional version — with turkey, mushrooms, onions, carrots and celery (no peas – I hate them) in a rich and creamy (but butter-free!) sauce.  It doesn’t get much better than savory comfort food that warms your soul, without increasing your waistline. 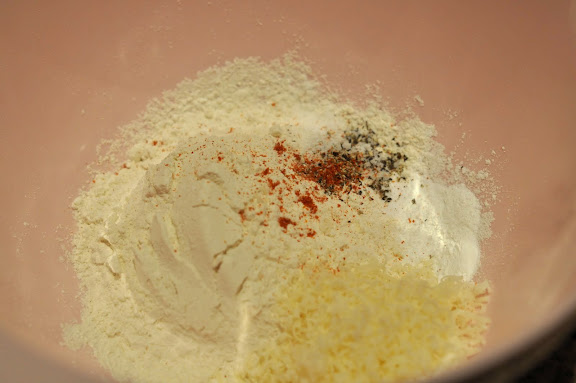 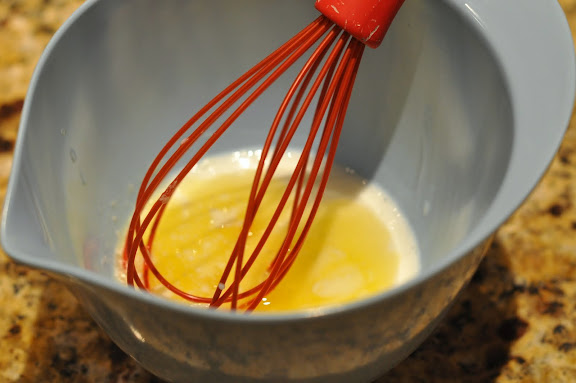 In a separate bowl, whisk together the buttermilk and melted butter. 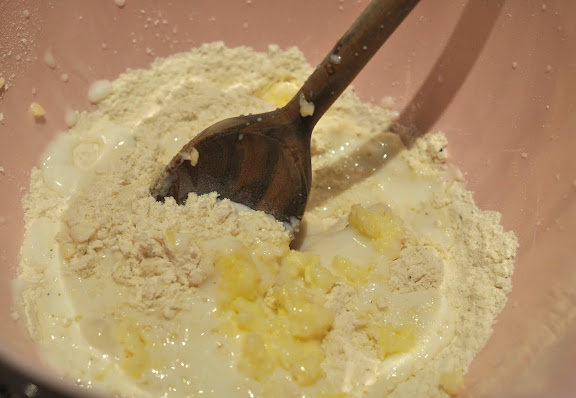 Add the buttermilk mixture to the dry ingredients and stir until combined and there are no pockets of dry flour. 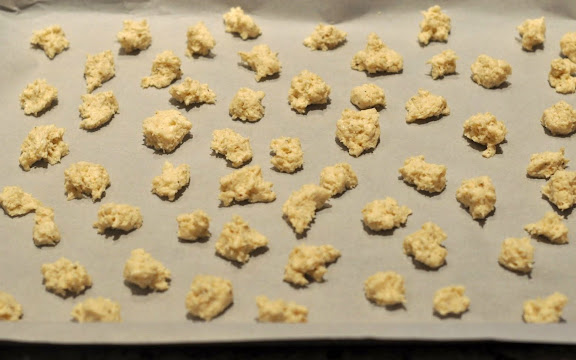 Break up the dough mixture into 1/4 and 1/2 inch pieces and place them on a cookie sheet lined with parchment paper. 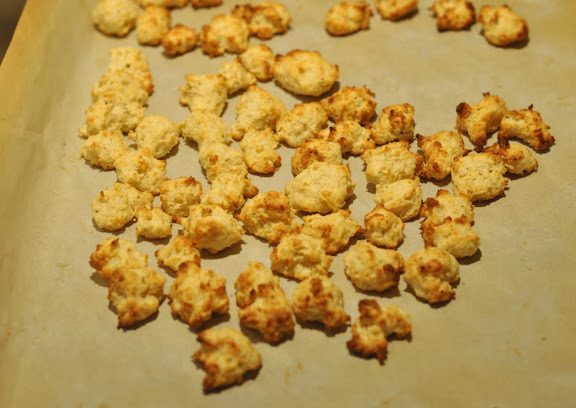 Bake the crumble topping in the oven preheated to 450 degrees, turning the pan once halfway through, until the pieces begin to brown — about 10-13 minutes. 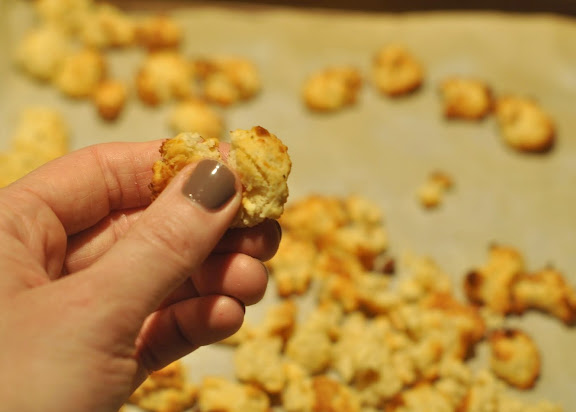 Once the crumbles cool, you may want to break up some of the bigger pieces so that the eventual topping will be more crumble-y. 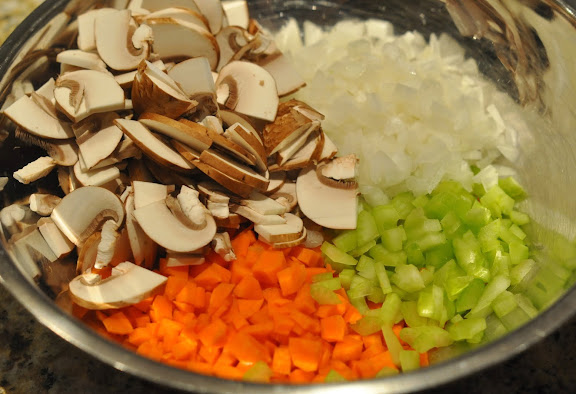 Chop the onion, carrots, celery and mushrooms for the filling.  You can use peas if you want (but please don’t if I’m coming to your house for dinner.) 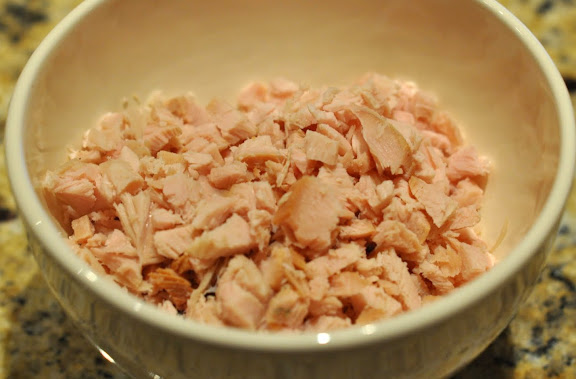 Dice the cooked turkey.  You could also use leftover cooked chicken. 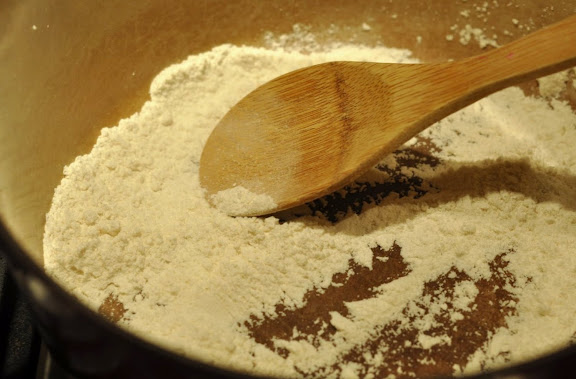 Toast the flour in a Dutch oven over medium-high heat, stirring often, until fragrant (you can smell the flour beginning to brown) and very light brown in color — about 5-7 minutes.  Transfer the toasted flour to a large bowl to cool, and wipe any flour residue out of the Dutch oven. 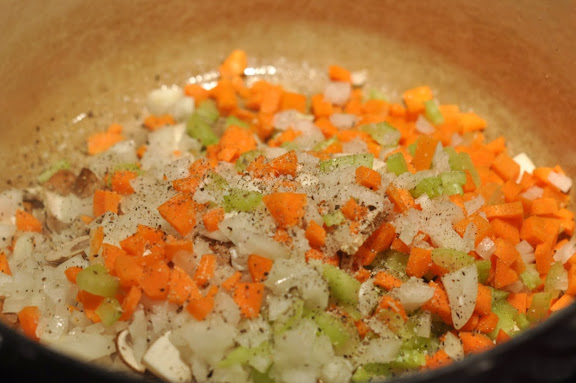 Heat about a tablespoon of vegetable or canola oil in the Dutch oven, add the veggies and salt & pepper, cover the pot and cook over medium-low heat, stirring occasionally, until the veggies begin to soften — about 8-10 minutes. 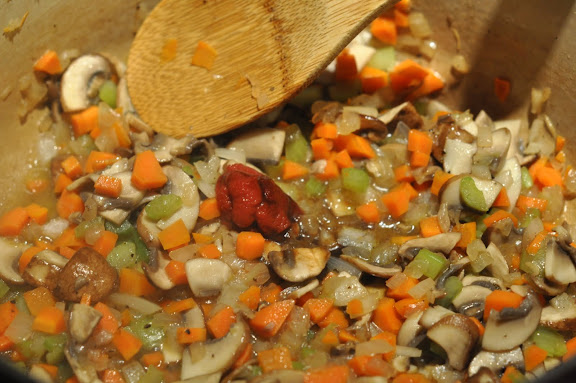 Add tomato paste and soy sauce, increase the heat to medium-high and cook, uncovered, until the veggies begin to brown — about 8-10 more minutes.  Transfer the cooked veggies to a bowl and set them aside. 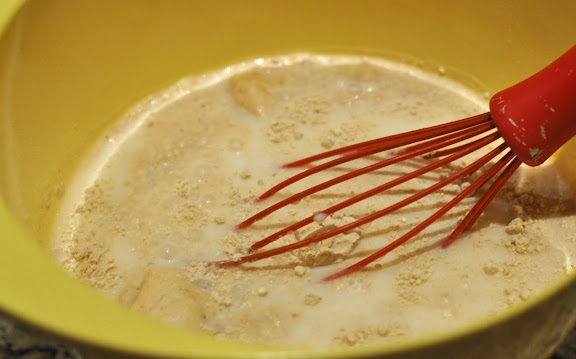 Whisk chicken broth and milk into the bowl of (cooled) toasted flour until evenly combined. 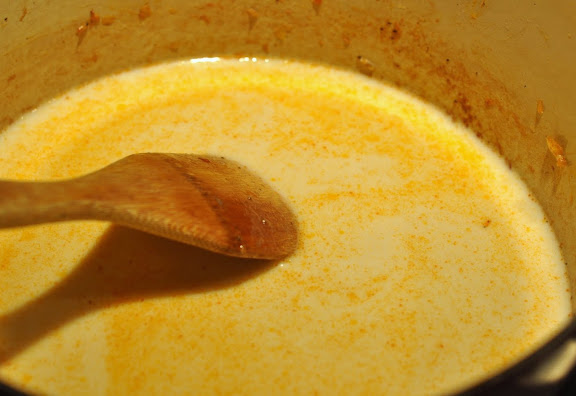 Add the broth mixture to the Dutch oven and bring it to a simmer, scraping up any browned bits from the bottom of the pot.  Simmer the mixture, stirring often, until it begins to thicken — about 5-10 minutes. 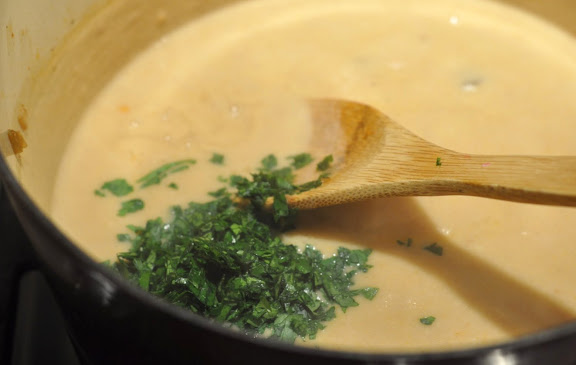 Off the heat, add chopped parsley and lemon juice to the sauce. 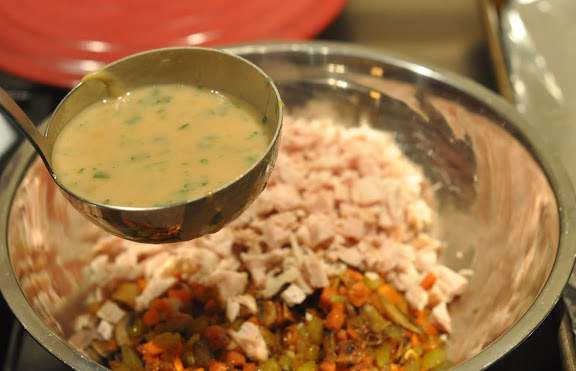 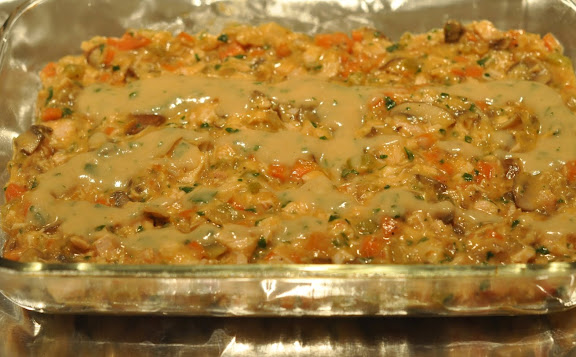 Spread the filling evenly in a glass baking dish.  We added a layer of leftover sauce to the top. 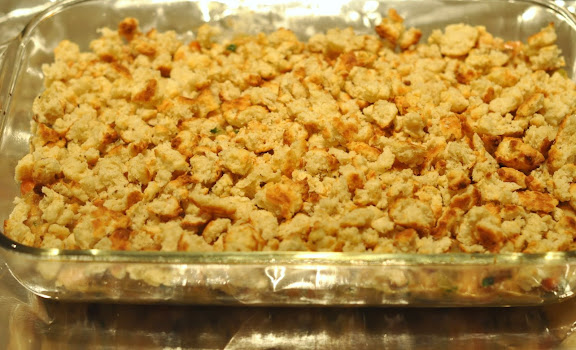 Sprinkle the crumble topping evenly on top of the filling.  Place the baking dish on top of a cookie sheet lined with aluminum foil and bake in the oven at 375 degrees until the filling is bubbling and the topping is browned — about 12-15 minutes. 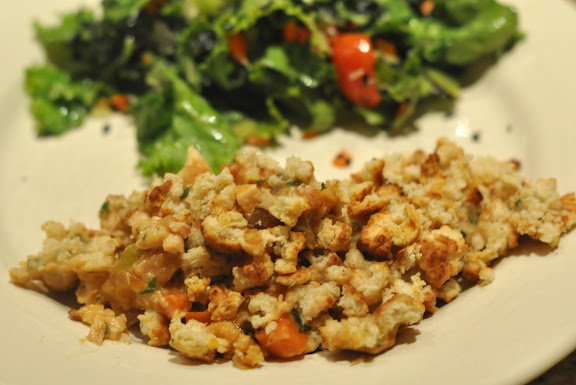 Garnish with fresh chopped parsley and serve.  We served ours with a simple garden salad for a healthy, but completely satisfying, meal.  (And if you’re Dan, go back for a second helping — “It’s ‘LIGHT!’  That means I can eat more of it!”)  Seriously, this dish is like a hug on a plate — go ahead and have another.  Let’s all have another.

For the crumble topping: