Now that we have a delicious new way to cook turkey breast and plan to cook turkey a lot more often, we need some good recipes for turkey leftovers.  In the past, we’ve tried to think outside the box when it comes to turkey leftovers — turkey paella and turkey enchiladas, for example — but this time we decided to do something a little more on the classic side.  Turkey Tetrazzini is a classic American dish, but one that neither of us had ever made or eaten.  We found a great recipe for tetrazzini in (go figure) “The Best American Classics” cookbook by the editors of Cook’s Illustrated Magazine.  We love the folks at America’s Test Kitchen because they exhaustively test all their recipes to come up with the best possible versions — something we thought would be key to successfully preparing a dish without having any clue how it was supposed to taste.  Turns out that it’s supposed to taste really delicious with surprisingly complex flavors for what basically amounts to a noodle casserole.  A noodle casserole that we will crave with every future turkey breast we cook. 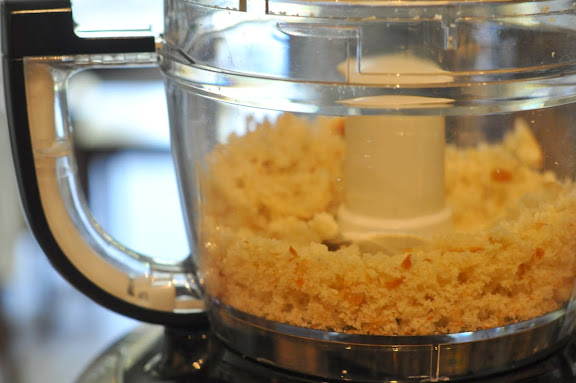 One of the components that elevates this tetrazzini to something more special than boring noodle casserole is the homemade breadcrumb topping.  Although not absolutely necessary, the recipe calls for toasting the breadcrumbs a bit before topping the casserole and baking it.  We agree that it’s a worthwhile extra step.  Throw some chunks of bread in the food processor and pulse until they are broken into small crumbs. 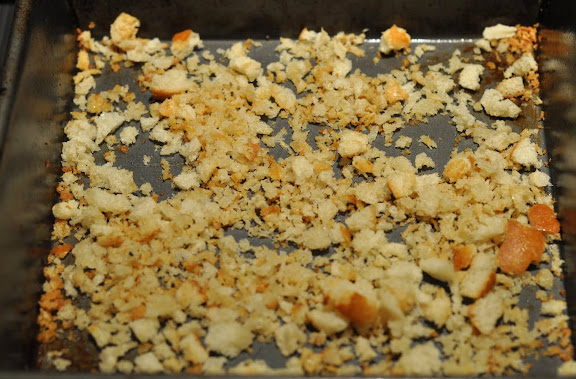 In a small baking dish, mix about a cup of breadcrumbs with about a tablespoon of melted butter and a pinch of salt.  Bake the crumbs in the oven preheated to 350 degrees until the crumbs are lightly golden brown — about 5-7 minutes.  Allow the crumbs to cool to room temperature. 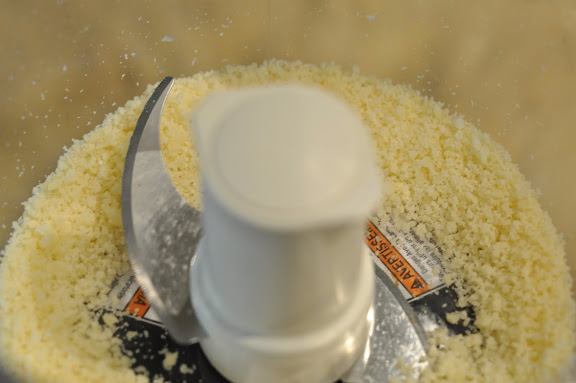 While you’ve got the food processor out, follow a tip we picked up from Ina Garten — use the food processor to “grate” the Parmesan cheese.  It’s so much easier and faster than grating it with a traditional cheese grater, especially for recipes that call for a lot of Parmesan cheese, such as this one (1 cup total.)  Cut the Parmesan into several big chunks, then pulse it in the processor until it’s “grated” into tiny pieces. 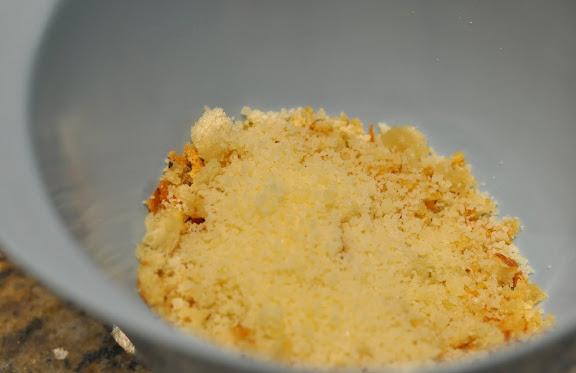 Toss about 1/4 cup of the cheese in with the toasted breadcrumbs.  Set aside the remaining cheese to go in the sauce. 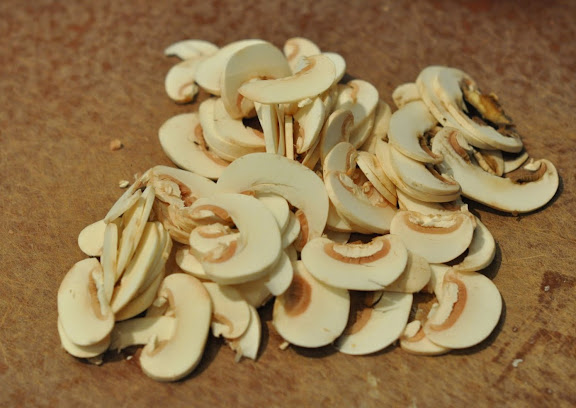 Slice the mushrooms into thin pieces. 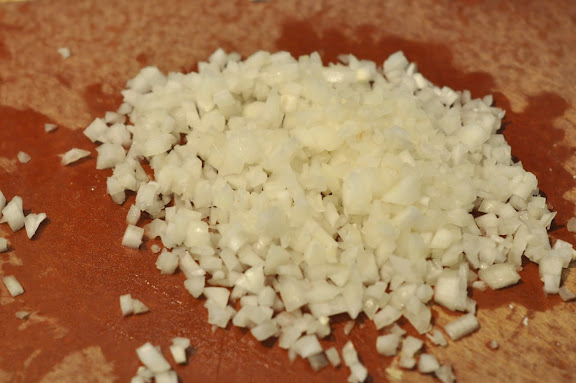 Then chop up the onion. 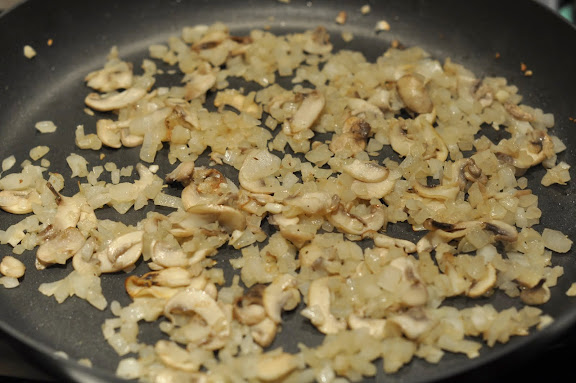 Heat about a tablespoon of butter in a skillet over medium heat and saute the mushrooms and onions, stirring often, until the onions soften and the liquid from the mushrooms releases and evaporates — about 10-12 minutes.  Season with salt & pepper and transfer to a large bowl. 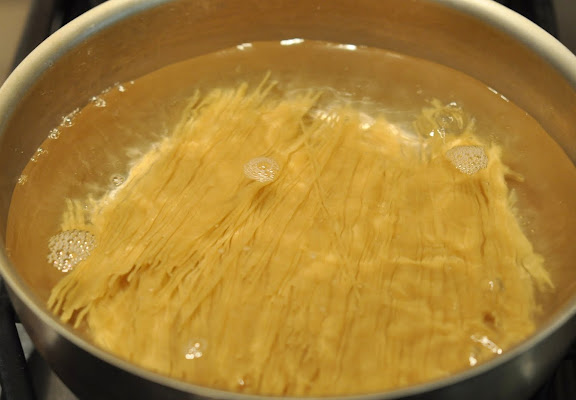 Boil the pasta (we used whole wheat thin spaghetti) in salted water until it is al dente.  Drain the pasta, reserving some of the pasta water.  Return the drained pasta to the pot and add a little of the reserved pasta water to keep the noodles slightly moist. 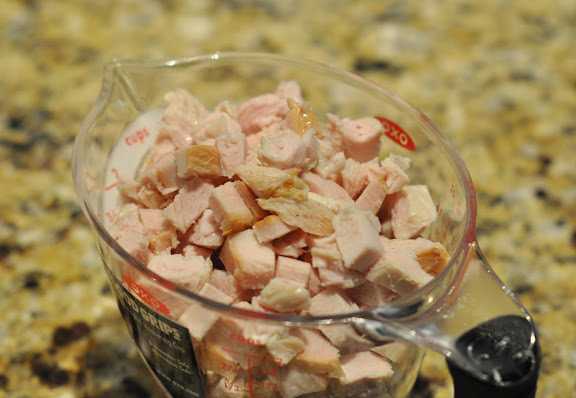 Chop up about 2 cups of leftover turkey and set aside. 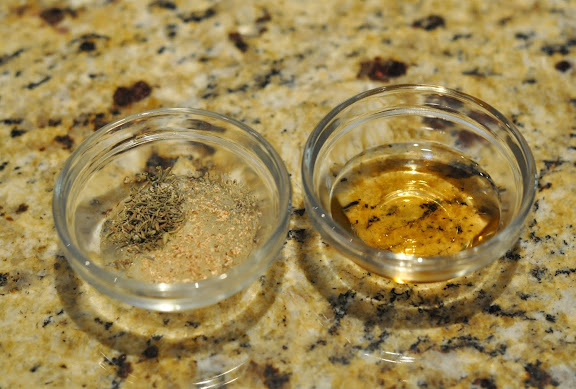 The sauce for the tetrazzini comes together pretty quickly and requires near-constant whisking, so it’s a good idea to have all the ingredients measured out ahead of time.  The ingredients include 4 tablespoons butter, 1/4 cup flour, 2 cups chicken broth, 3 tablespoons dry sherry, 3/4 cup Parmesan cheese, 1/4 teaspoon nutmeg, 2 teaspoons lemon juice, and 2 teaspoons minced fresh thyme (we didn’t have any so we used dried thyme, but a little less of it.)  Although we made a half recipe of the tetrazzini this first time, we would have liked a little more sauce in the end result.  So, in the future we will use the full recipe measurements for the sauce (listed above) and half of the measurements for the remaining ingredients. 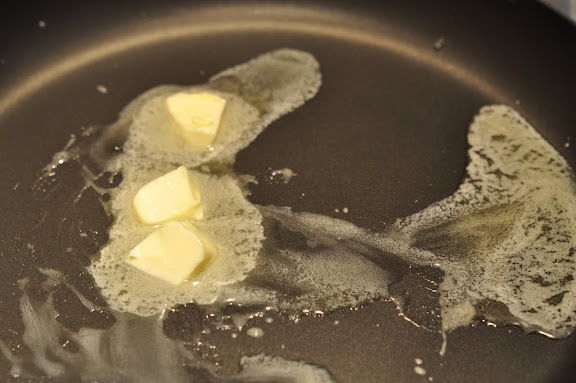 Melt the butter over medium heat. 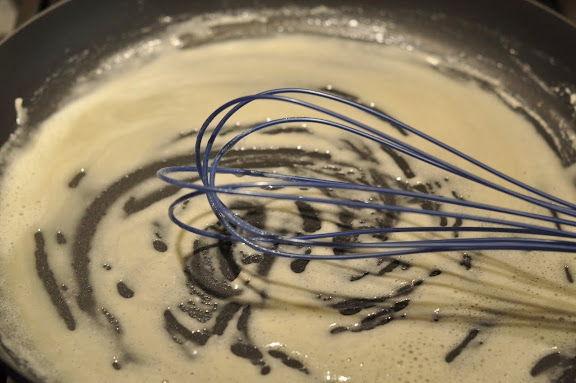 Add the flour to the melted butter and whisk constantly until the flour turns slightly golden — about 1-2 minutes. 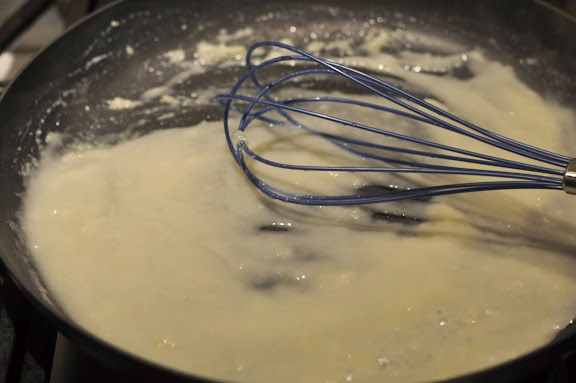 Whisking constantly, slowly add the chicken stock to the sauce. 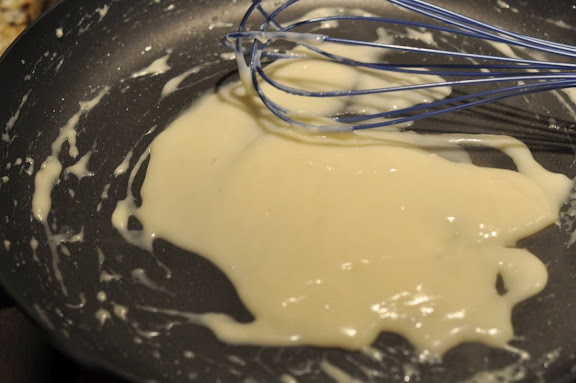 Turn the heat to medium-high and simmer, still whisking, until the sauce thickens — about 3-4 minutes. 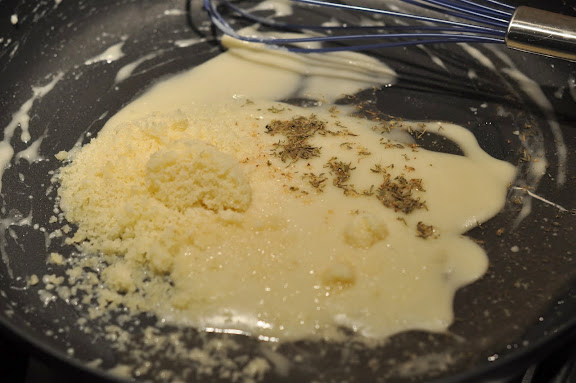 Take the skillet off the heat and add the sherry, Parmesan, nutmeg, lemon juice, thyme and 1/2 a teaspoon of salt. 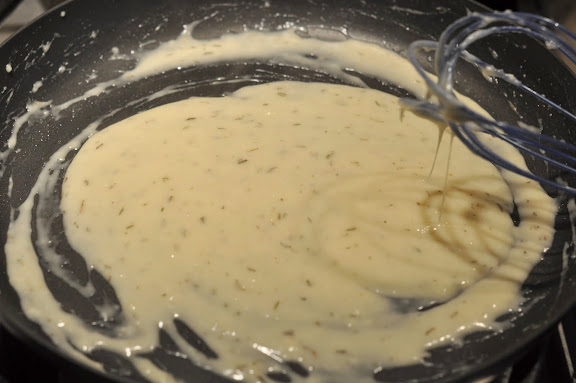 Whisk it all together and set aside. 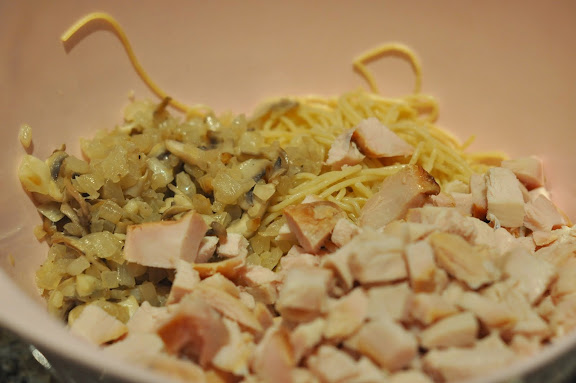 To the bowl with the sauteed mushrooms and onions, add the turkey and the pasta.  We added the pasta in small doses and mixed everything together until we got the right pasta-to-turkey-to-veggies ratio.  The original recipe also calls for adding peas to the mix at this point, but we don’t prefer peas and didn’t use them.  (The truth is that I hate peas, and Dan could take or leave them but loves me, so we never cook with peas.  As the old saying goes:  “Happy Wife, Happy Life.”) 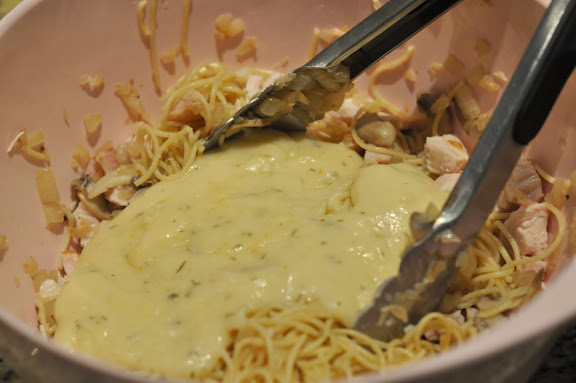 Then add the sauce.  If you make the full recipe of sauce but use half of the other ingredients, add the sauce in small doses and keep adding and mixing until you get a consistency you like.  Add salt and/or pepper to taste. 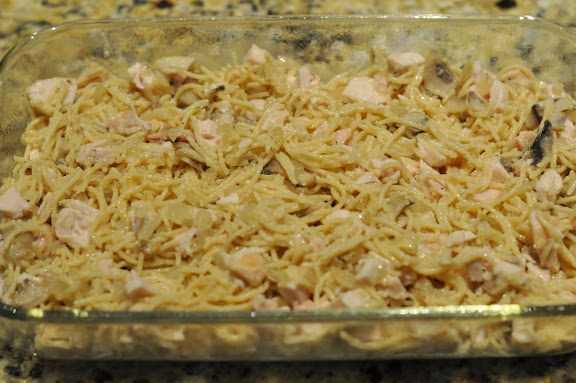 Scoop the noodle mixture into a greased, shallow baking dish and spread out in an even layer. 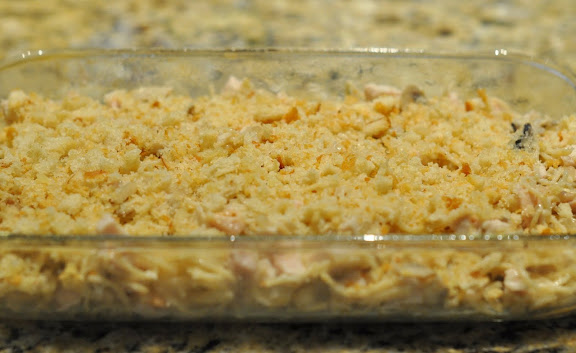 Sprinkle the breadcrumb topping over the noodle mixture. 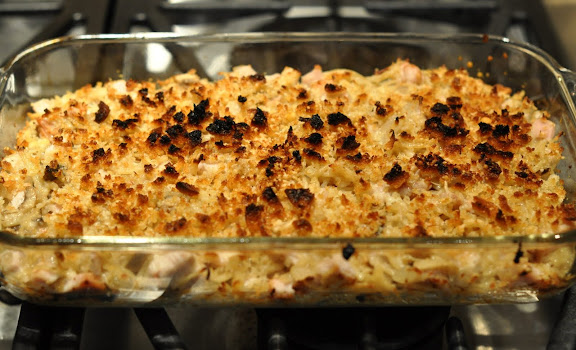 Bake the dish, uncovered, in the oven preheated to 450 degrees until the bread crumbs are brown and the mixture is bubbly — about 10-12 minutes.  Update:  Although the original recipe calls for heating the tetrazzini at 450 degrees, we discovered that the bread crumbs get too browned too quickly at that temperature.  Try heating it at 350 or 375, and keep a close eye on it so the bread crumbs don’t get burned.  We were really happy with how the tetrazzini turned out, especially as a first-time recipe.  We liked the variety of textures from the pasta, chunks of turkey, crispy breadcrumbs and creamy sauce.  And the thyme, sherry and lemon juice combined to give the sauce a sophisticated flavor.  This recipe has officially been added to our turkey leftovers rotation.