When Dan purchased his smoker for one of the Charcutepalooza challenges, my first thought was that it would be yet another cooking gadget that he would use a couple of times before getting bored with it.  Happily, I could not have been more wrong.  He uses the smoker a lot, for such smoked delights as ribs, game hen and tri-tip.  He also occasionally uses the smoker as a charcoal grill, for that old-school grill flavor.  What I had originally thought was bought on a whim has turned out to be a very worthwhile purchase that has allowed Dan to expand his grilling repertoire.  It doesn’t hurt that the smoker is incredibly easy to use and has achieved near-perfect results each time we’ve used it.  If you grill often, enjoy smoky flavor and have the room and budget for it, the Weber Smokey Mountain Cooker is a great investment that we definitely recommend (in a non-sponsored way.) 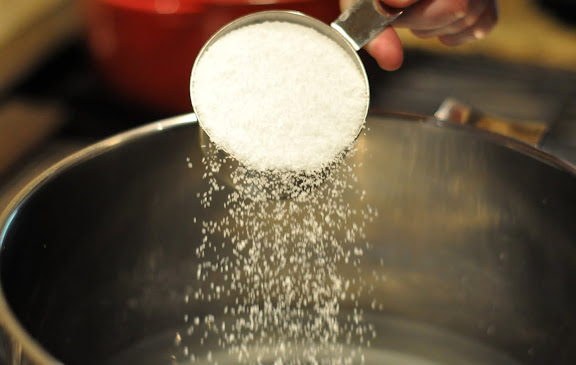 Over the years and preparation of numerous Thanksgiving dinners, Dan has perfected a turkey brine adapted from this recipe by Alton Brown.  Brining the turkey gives is a little more flavor and keeps it juicy.  It’s easy to do, with just a few simple ingredients, and we’ve deemed it a necessary step for any turkey we cook — Thanksgiving or otherwise.  Start by adding a cup of Kosher salt to 3 quarts (12 cups) of water in a pot large enough to accommodate the water and the turkey. 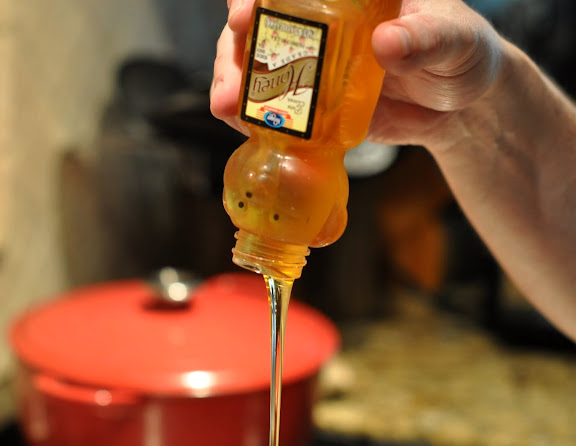 Next, add a half pound of honey to the salted water. 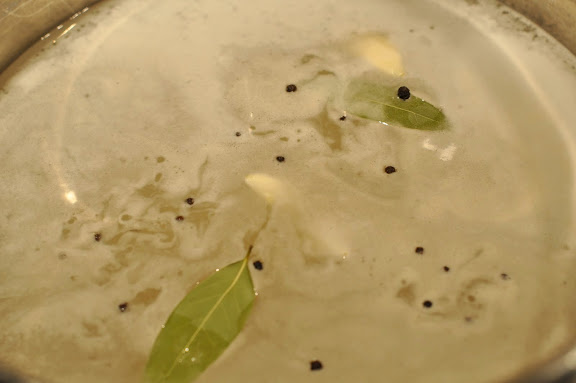 Then add 2 bay leaves, sprinkle in some whole peppercorns, throw in a couple of slightly crushed, peeled garlic cloves and heat it all up until the salt and honey completely dissolve. 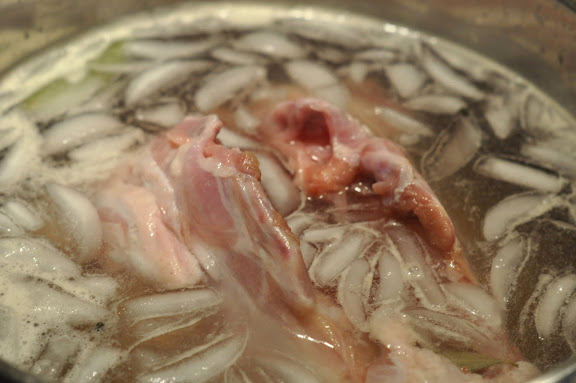 Take the pot off the heat and add a bunch of ice to cool it down.  Once the water is cool, add the turkey breast to the pot and place the pot in the refrigerator for 12 or so hours. 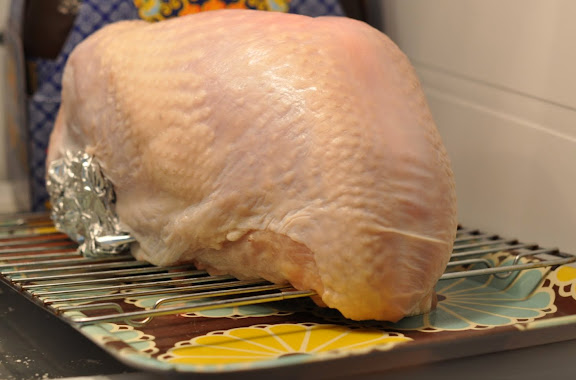 Next, remove the turkey breast from the brine and rinse it under cold water.  Stick it back in the fridge until you’re ready to cook it.  This refrigeration step is optional, but post-brine refrigerating for at least an hour helps to dry out the skin of the turkey a bit, which results in a crispier skin when you’re all done. 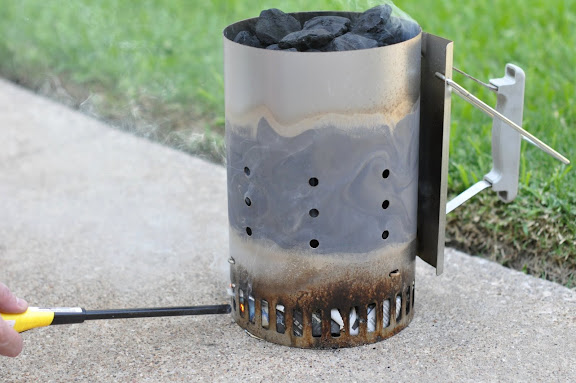 This device, which we like to call Smoker’s Little Helper, heats up the charcoal quickly and efficiently.  It’s not absolutely necessary for smoking meat, but it sure is a handy way to light charcoal, without the off-putting taste that lighter fluid can add.  Once the charcoal is hot, add it to the bottom of the smoker with whatever wood chunks you happen to be using.  For this turkey, we used a mixture of apple chunks and cherry chunks for the smoke flavor.  Smoker tip:  starting with cold water in the water pan of the smoker helps to keep the temperature of the smoker at a consistent, fairly low temperature. 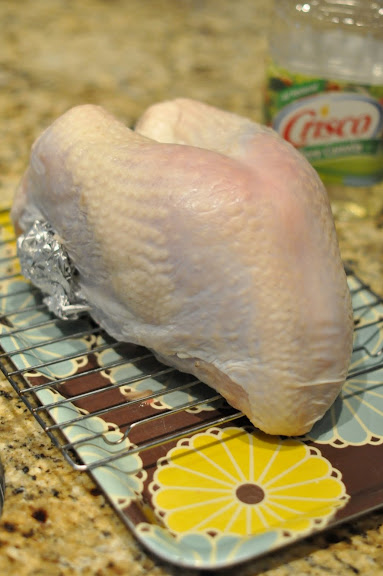 Immediately before placing it in the smoker, remove the turkey from the fridge and give it a good rub-down with some vegetable oil.  There’s no need to add any additional spices or rub, because the turkey is already seasoned from the brine. 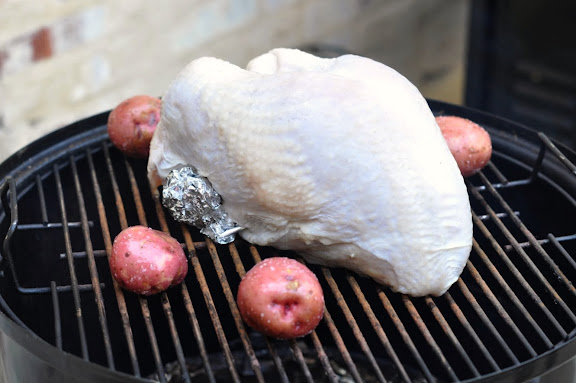 Place the turkey on the smoker grill grates.  Dan added some foil under one side of the turkey breast to help it sit flat and stable.  We also decided to smoke four little red potatoes, just to see how they would taste.  We rubbed them with a little olive oil, then seasoned them with salt and pepper.  Put the lid on the smoker and adjust the vents so that the smoker temperature reads 225 to 250 degrees. 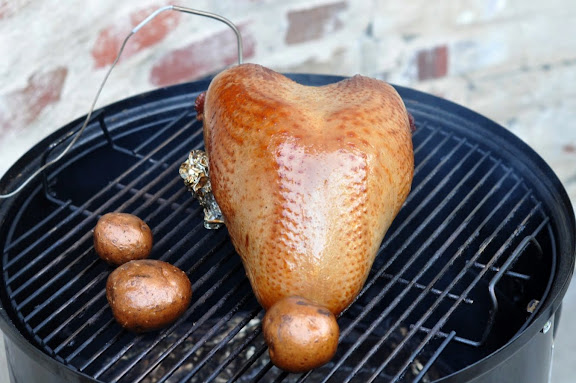 Although the beauty of the smoker is that you can basically set it and forget it until the meat is done, we periodically take a few peeks to make sure the smoker temperature is holding steady (it usually is, unless it’s a particularly windy day) and see how the meat is coming along.  For some, watching the turkey skin brown is a little bit like anticipating Christmas morning when you were a kid. 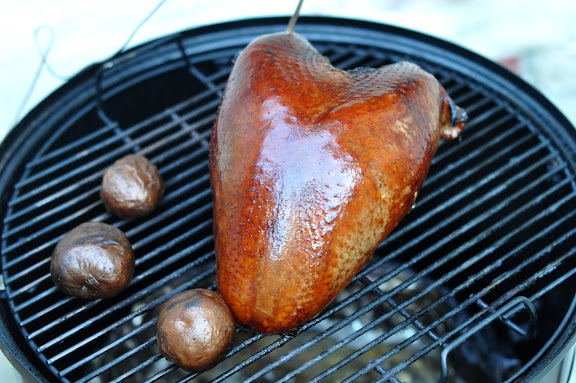 Cook the turkey until its internal temperature reaches 160-165 degrees.  Ours cooked for a little more than two hours.  You may notice that the potato population on the grill was reduced by one.  Our little potato experiment revealed that if you place a potato too close to the openings where the grate handles are, that potato may not make it through the smoking process.  Oops. 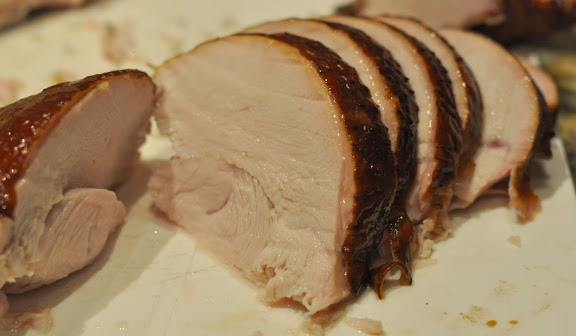 Allow the turkey to rest for fifteen minutes or so before slicing it. 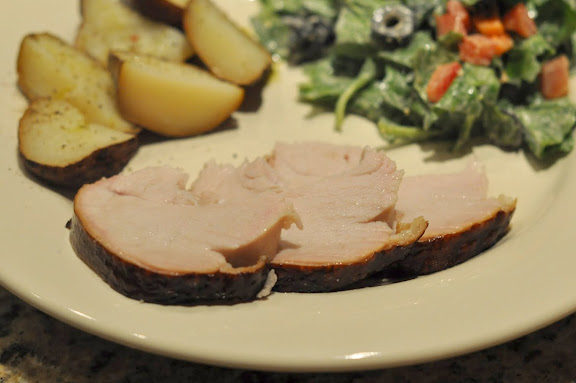 We served the turkey with the smoked potatoes and a garden salad.  The potatoes were okay – despite a little smokey flavor they were still pretty bland and didn’t get crispy on the outside as we had hoped.  But the turkey was perfect — juicy and smokey with a slight sweet/salty taste from the honey brine.  It has also resulted in some amazing sandwiches for our lunches this week.  As delicious as smoked turkey is, and as easy as the smoker is to use, we’ll be having turkey breast a lot more often than just once per year on Thanksgiving.