Has anyone in the history of cooking ever used up an entire bunch of celery before it spoils? Even considering how long it lasts (weeks!), we almost always end up with a sad, wilted collection of stalks that we throw away and replace with a fresh bunch every month or so. Celery is an under-used vegetable, is what I’m saying. Yet it’s one that we pretty much always have in the fridge — to flavor a soup or a stew, to make stock, or to chop up for a garden salad. Aside from this recipe that we love so much we always serve it at our Thanksgiving dinner (as well as other times throughout the year), we rarely come across a dish where celery gets to shine as the main ingredient. It’s a shame, since celery has many health benefits, including antioxidants and nutrients with anti-inflammatory effects. So we were pleased to see Lidia Bastianich’s take on caprese salad — with a celery twist — in her latest book, “Lidia’s Commonsense Italian Cooking.” We never would have thought of replacing the tomatoes in traditional caprese salad with celery, but it works and it’s genius; especially during the winter, when high-quality tomatoes can be hard to find, but good ole celery is as plentiful as always. 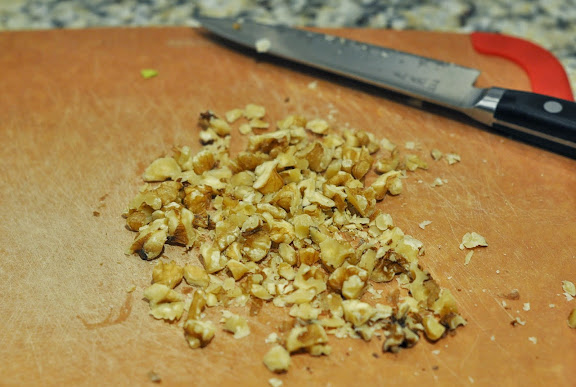 We might never have imagined putting walnuts in a caprese salad either, but toasted walnuts and celery are pretty much BFFs (“Best Flavor Friends”). It probably doesn’t matter whether you chop the walnuts before toasting them or vice versa, but we chopped ours first. 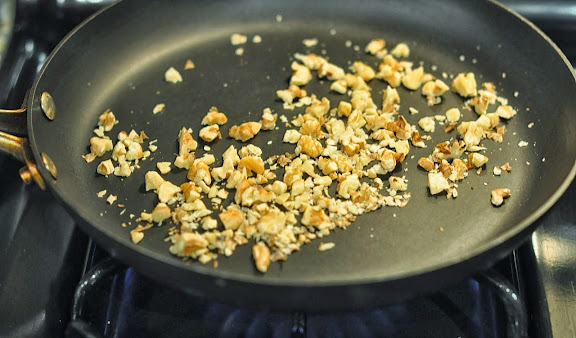 Then toast the nuts over medium heat until they are lightly browned and smell toasty — about 5-8 minutes. Keep a close eye on them because they can go from toasted to burned quickly (been there, done that). Set the toasted walnuts aside to cool completely. (But not in or near any plastic wrap or baggies, or the nuts could melt the plastic. Been there, done that too. Don’t act so surprised.) 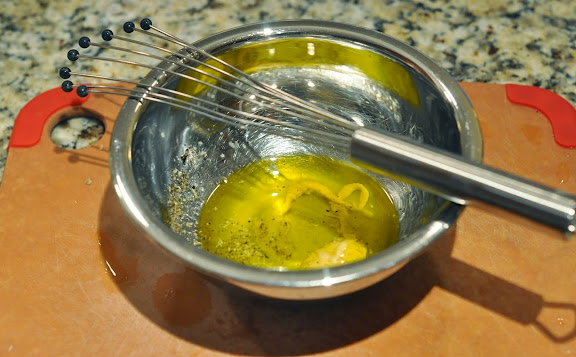 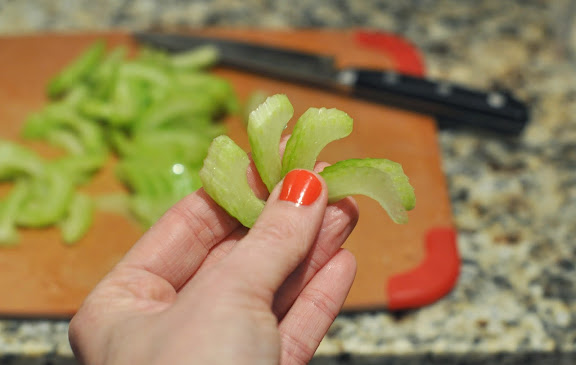 Thinly slice the celery on the bias. Cutting the celery this way gives it interesting texture and shape. You should have about a cup to 1 1/2 cups chopped celery. 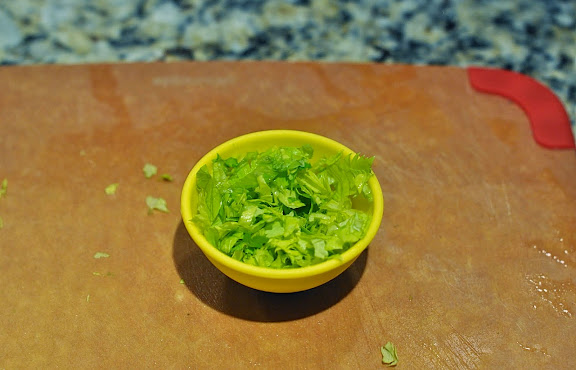 Don’t forget to also chop up some of the celery leaves, especially the tender ones from the inner stalks. Toss the celery, leaves and cooled walnuts together in a bowl and slowly add dressing until the salad is dressed to your liking. 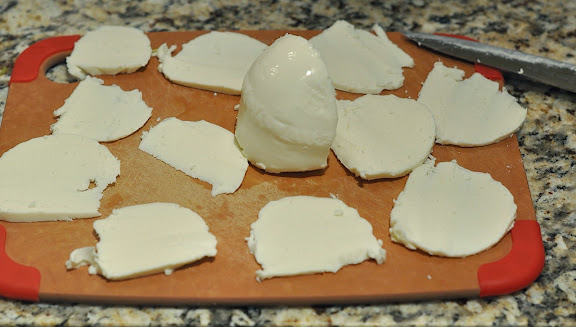 You can either cut the mozzarella into cubes, or thinly slice it to form the base of the salad. Since we were using a good-sized ball of cheese, we sliced it. 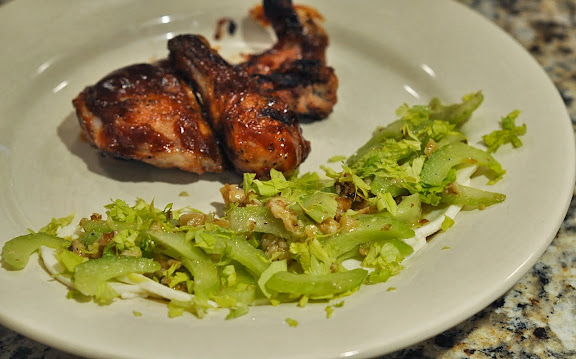 Fan the mozzarella slices out on the plate, then top with the dressed celery and walnuts. Drizzle a little more dressing over the finished salad to bring it all together. The trio of crisp celery, creamy mozzarella and toasted walnuts provides the perfect contrast to tangy barbecued game hen, and would work just as well with many other types of proteins. So the next time you’re struggling to come up with an interesting vegetable side dish, don’t forget the celery! You probably even already have some in the fridge.

1 thought on “Mozzarella and Celery Salad”