We recently tried a new side dish from Ina Garten’s latest cookbook “How Easy is That?”  We have to say, it was pretty darn easy.  And delicious.  So good, in fact, that we are going to serve it at Thanksgiving this year.  Celery salad is not something we ever would have thought to make, but as Ina recognizes, celery can serve as a starring role and should not always be relegated to tuna salad support.  This is definitely a side dish we will keep in the rotation. 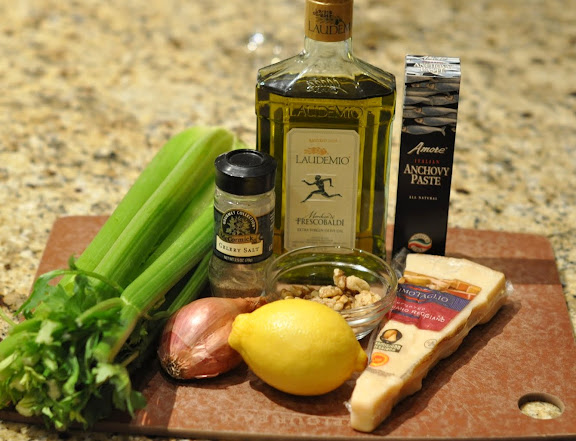 The ingredients for the salad are simple:  celery (be sure to pick a stalk with pretty leaves because you’ll include a little bit of the leaves in the salad), shallot, lemon, good parmesan cheese, walnuts, celery salt, good olive oil and anchovy paste.  The anchovy paste may not be an ingredient you generally have on hand, but it can be found in the same grocery store section where they sell tuna fish and sardines and usually comes in a tube in a box like the one pictured above.  By the way, when we say “good olive oil,” we mean the more expensive extra virgin olive oil that we keep on hand for special recipes, rather than the olive oil we use for everyday cooking.  “Laudemio” is our favorite “good olive oil.”  You can really tell a difference between it and regular olive oil.  We use it when the olive oil is one of the main ingredients of the dish — like this celery salad, or a caprese salad.  Speaking of which, you know it is good because they served it to us when we were on Capri, Italy (and everything is better in Italy).  It can be a little difficult to find, but we have bought it from our local Central Market.  On with the salad… 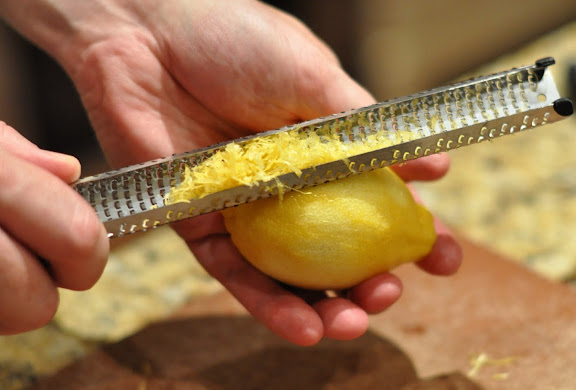 The zester is a very handy kitchen tool to have.  Dan’s technique (which I just noticed while typing this post) of holding the lemon in his palm and turning the zester over is a good way to keep all the shavings on the inside of the zester (rather than all over your counter or cutting board – not that I would know anything about that).  This recipe calls for the zest of about a half of a lemon. 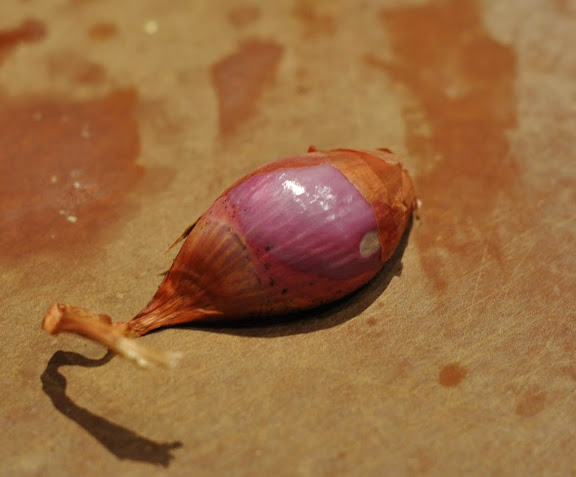 If you’re not familiar with shallots, this is what they look like.  Similar to garlic and onions, you’ll want to peel the outer layer before chopping. 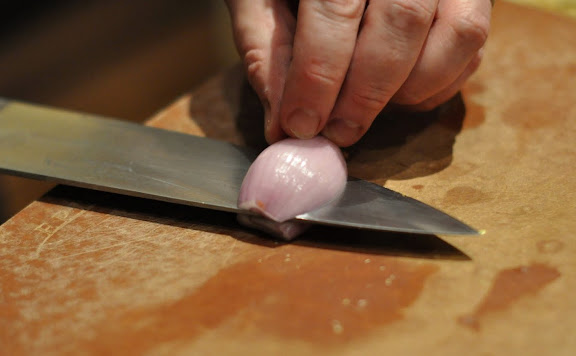 Dan uses this same technique for chopping onions.  While holding down top of the shallot with your fingertips, carefully make horizontal cuts almost to the end of the shallot. 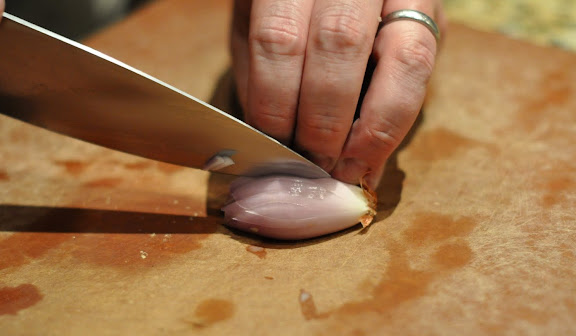 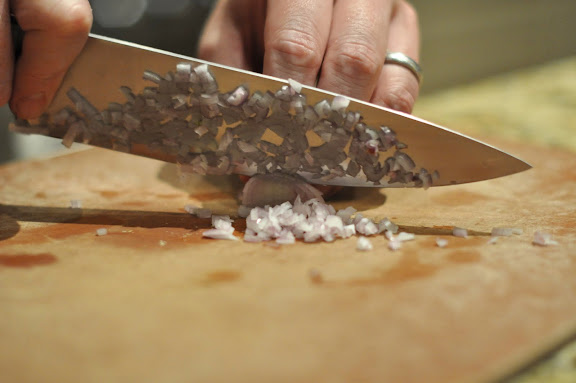 Then chop down and across to get your finely diced pieces of shallot.  It’s pretty easy. 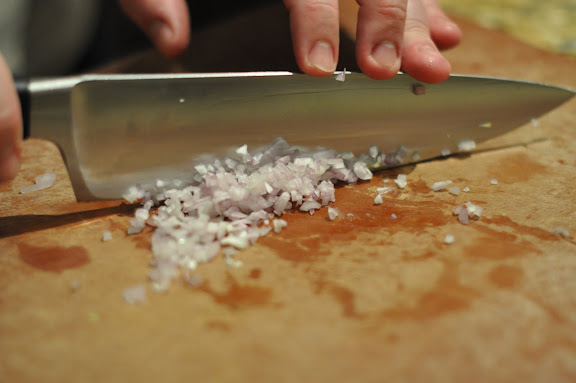 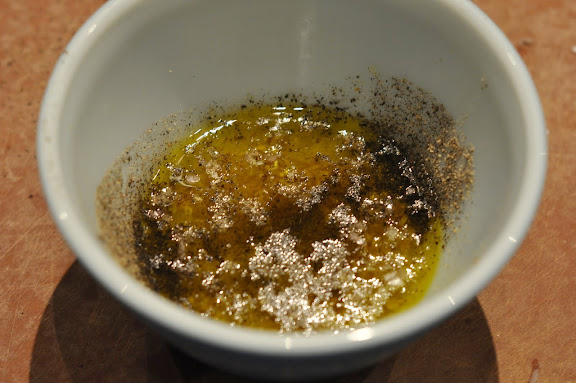 The recipe calls for making the dressing an hour ahead of time so it can chill in the fridge and the flavors can blend, but we only made ours about half an hour before we ate and still thought it turned out really good.  The dressing ingredients are:  1/4 cup of olive oil, lemon zest, lemon juice from one lemon, 1 tablespoon minced shallots, 1/2 teaspoon celery seed, 1/4 teaspoon celery salt, 1/4 teaspoon anchovy paste, and salt and pepper.  You could potentially substitute salt for the anchovy paste, but we think it added nice flavor with zero “fishy” taste.  Anchovy paste is actually used in Ceasar salad dressing – which doesn’t have a fishy taste either.  Try it.  (Also, we had celery salt on hand but no celery seed because we forgot to add it to the shopping list — we just added a little more celery salt and a little less regular salt, and it was fine). 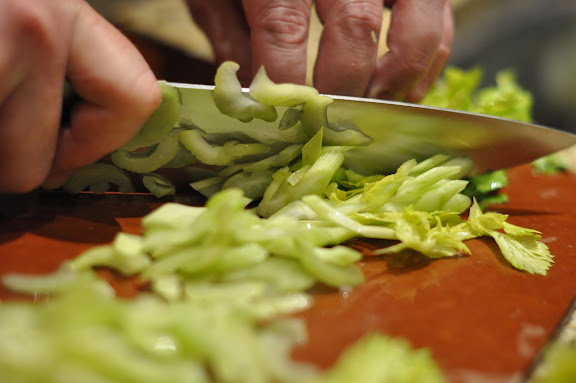 Chop up the celery into thin, bite-sized pieces.  If you chop a little bit along the diagonal, you get a nice shape.  Chop up a few of the leaves as well to go in the salad. 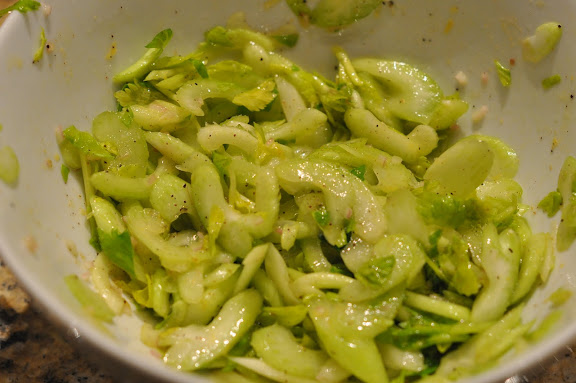 The recipe calls for tossing the celery in the dressing ahead of time (which we did, but not as far in advance as the recipe instructed — still good).  We did not use all the dressing — just enough to moisten well.  When pouring the dressing over the celery, I whisked it with a fork at the same time to make sure all the ingredients mixed together and were well distributed over the celery.  Save the leftover dressing in case you want to whisk a little more over the finished salad. 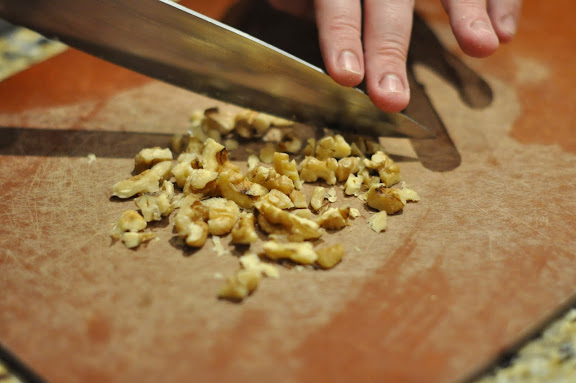 We don’t often cook with walnuts and considered leaving them out of the recipe.  But we found that they added a really good flavor and we’re glad we included them.  First, chop them up into even-sized pieces, but not too small. 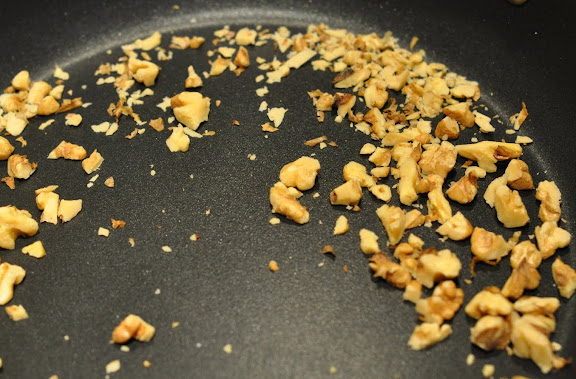 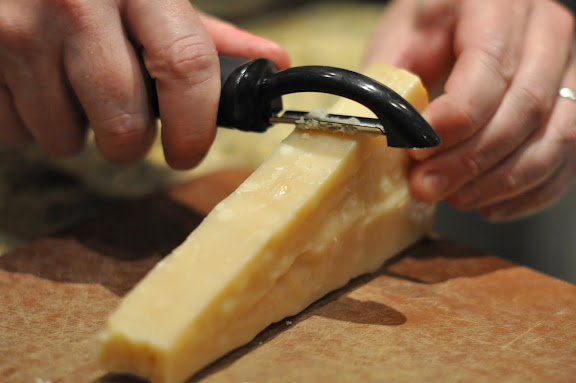 While the walnuts are toasting, get the parmesan cheese ready.  We have a kitchen tool that is designed for shaving cheese (technical term, cheese shaver?), but Dan decided to try a vegetable peeler instead. 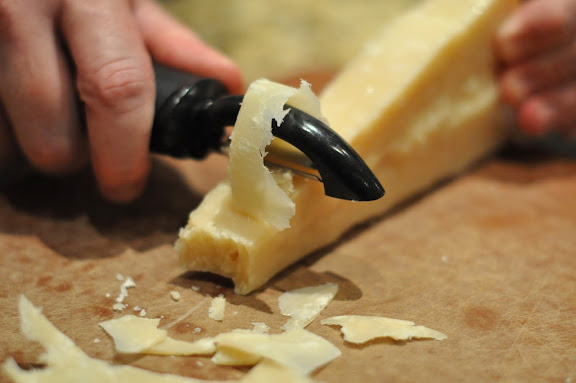 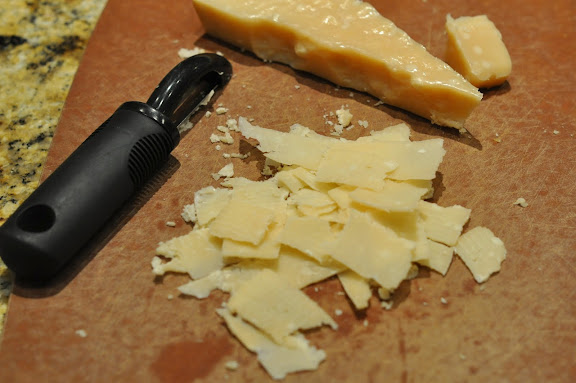 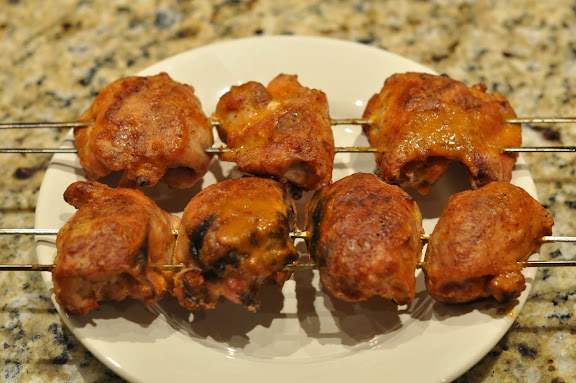 We served the Celery Salad with Dan’s famous grilled peri chicken thighs, and the two went really well together.  We’ll have to do a separate post on those one of these days. 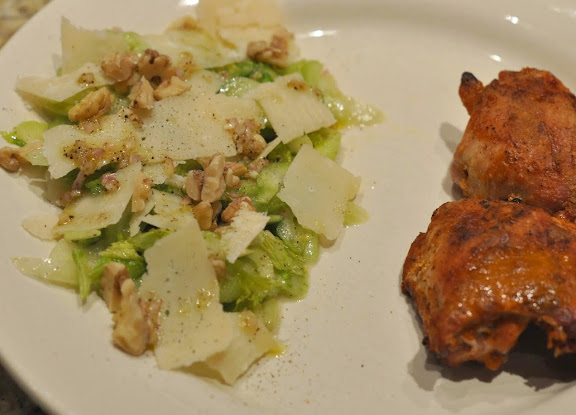 We highly recommend Celery Salad the next time you’re having poultry and need a side dish with compatible flavors that adds a little color to the plate.  Like, say, next Thursday perhaps?  Dan says, “we’re definitely Thankful that we found this yummy new side dish!”