Some of you may have noticed a lack of activity around here for the past week.  There are two very  important reasons (pictured on the left) why we were too busy to post. Our much-loved niece and nephew and their parents came to visit! We had a great time, especially on our outing to the Dallas Zoo.

Prior to this weekend, we had never been to the Dallas Zoo. We thought it might be fun for our niece and nephew, and it turns out that we may have enjoyed it even more than they did.   This post doesn’t include any food photos from the Zoo because we just brought sandwiches and chips in a cooler and had a little picnic.  We saw lots of other people pulling coolers as well, and there are several areas to sit and have lunch.  But, we also noticed several on-site food options if the picnic is not your thing. 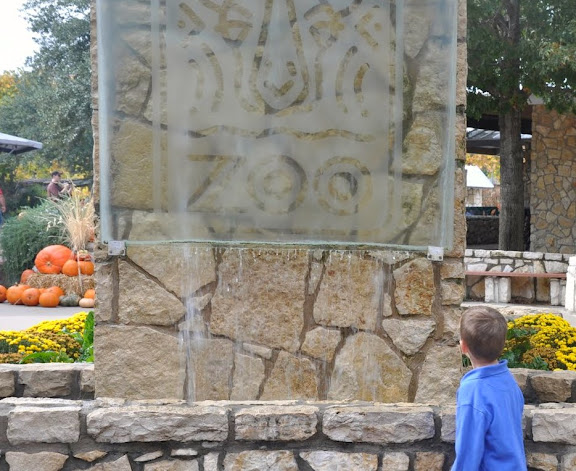 Obligatory photo in front of the big Zoo sign/fountain. 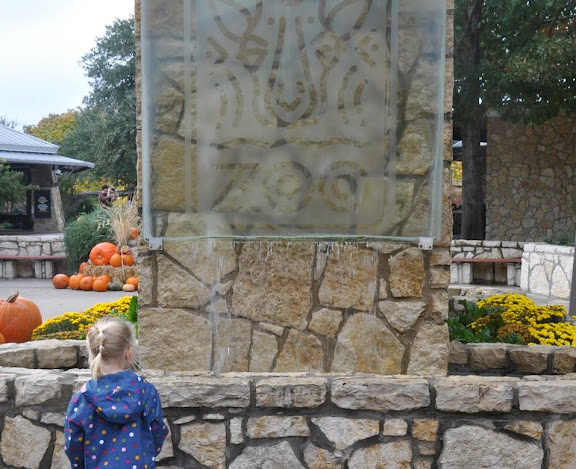 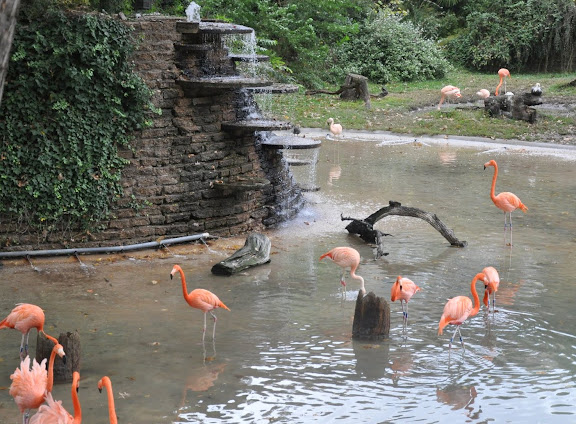 Flamingos!  It was a rather gray (and later really rainy) day when we went to the Zoo, so the pink flamingos really stood out.  One of the things we liked best about the layout of the Zoo was how everything is really spread out with curved walkways, such that there is an element of surprise as to which animals you’re going to come upon around each curve. 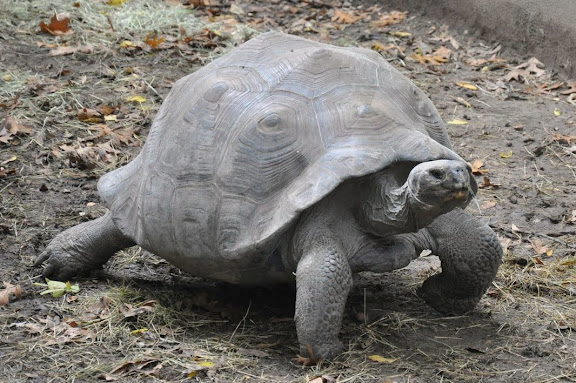 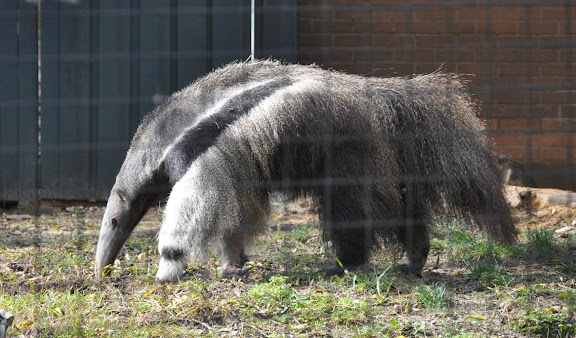 The Zoo has an exhibit with several anteaters.  It was really cool to watch them forage around, sticking their long snouts into tree stump holes and dragging them along the ground looking for food.

Rhinoceros — looks even more like a dinosaur in person (or perhaps Aunt Kelly watched a few too many episodes of “Dinosaur Train” with the kids this weekend.) 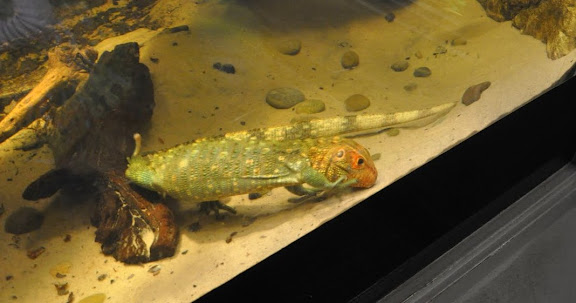 This was a really colorful (and very swimmy = tough to photograph) lizard-type thing in the reptile house. 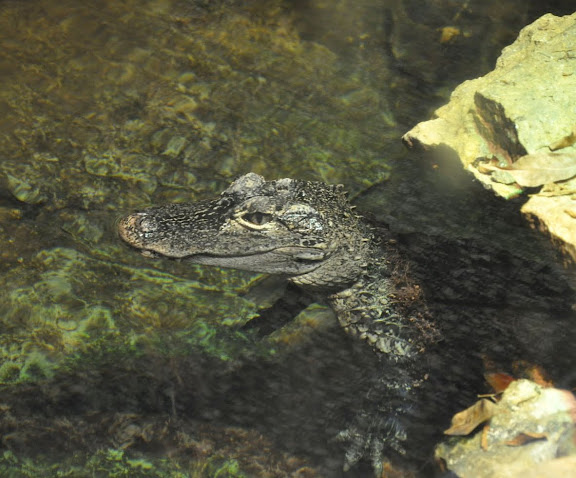 Small crocodile in the reptile house.  Or alligator.  (The niece and nephew are young enough that Uncle Dan and Aunt Kelly don’t necessarily have to know the difference.) 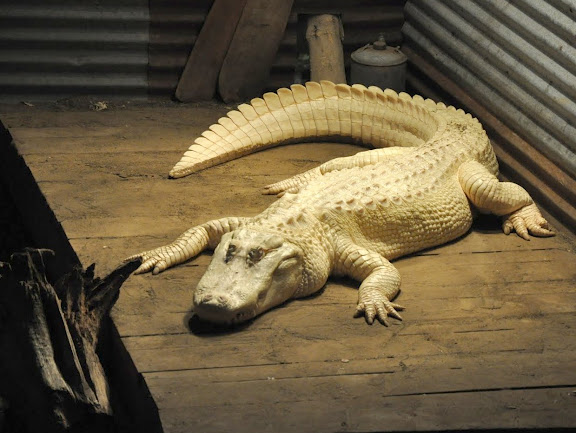 This albino alligator (crocodile?) was the animal that looked most fake out of everything we saw that day.  But we were assured that it was real (although we never saw it move). 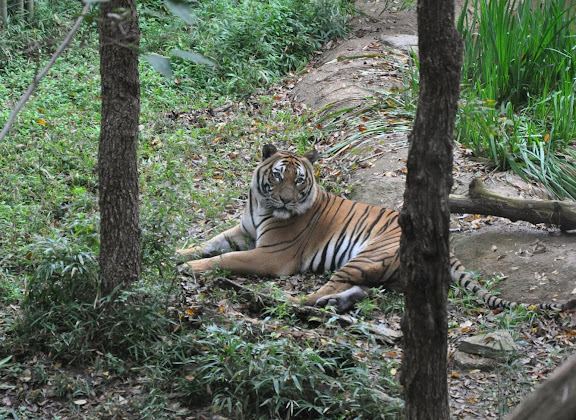 The tigers hang out in a habitat where Zoo visitors can look down on them from a safe vantage point, but still see everything.

A boy and his uncle check out the monkeys.  (There is a joke in there somewhere, I’m sure). 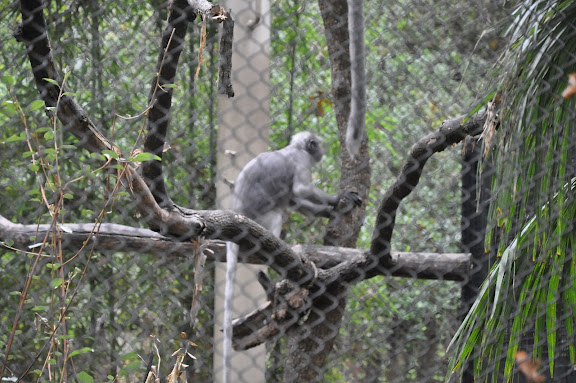 One of said monkeys. 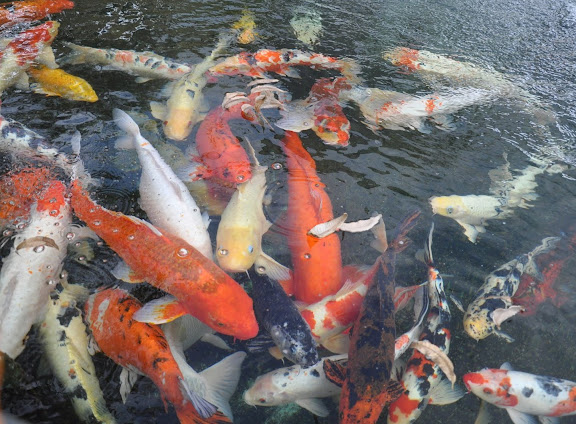 The Zoo has a children’s area with lots of kid-friendly exhibits.  Including giant koi fish that swim right up to the top when you stand next to their tank. 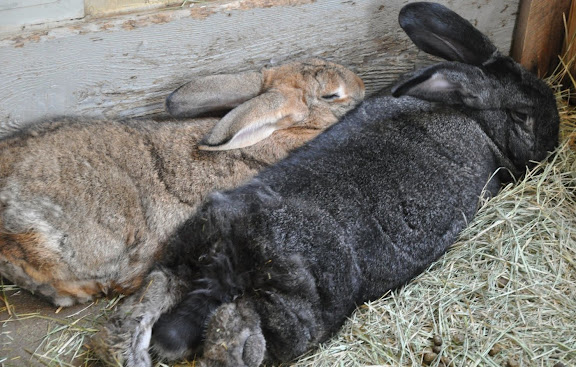 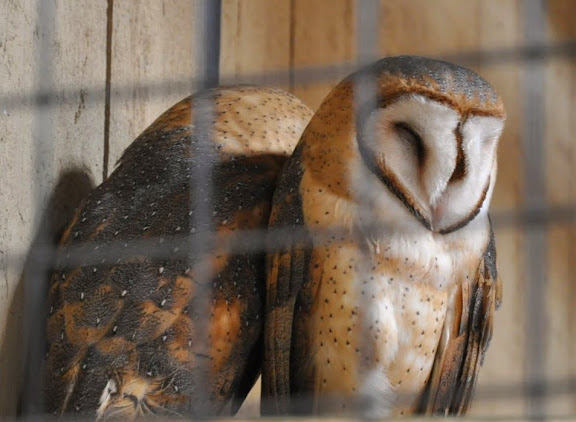 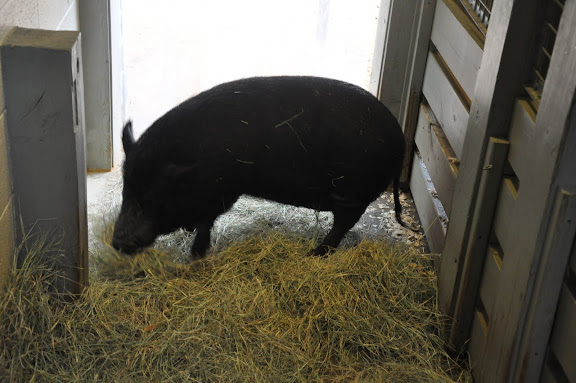 Our niece enjoyed watching this big pig eat hay, but the pig was not so interested in staying still for a photo. 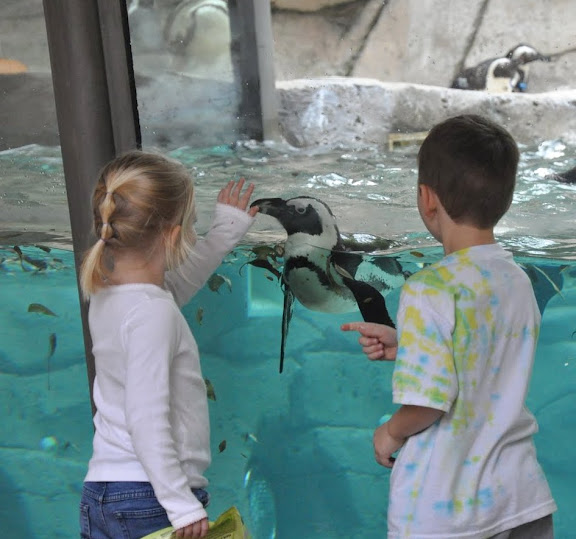 We came around a bend and the kids shouted “penguins!” and took off running.  This was a really cool exhibit consisting of a big clear-walled habitat for watching the penguins swim around.  This penguin hung out by the wall with the kids for at least 5 minutes while we were there taking pictures and watching the other penguins. 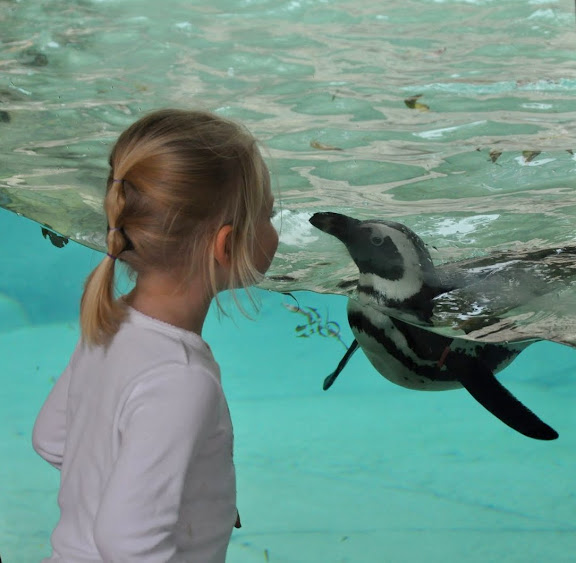 The safari section of the Zoo is AMAZING.  There is a huge grassland area where many elephants, giraffes, zebras and other African animals hang out.  It started to rain shortly after this shot, so unfortunately we didn’t get too many photos of the safari part of the Zoo.  But, yet another great thing about the Dallas Zoo is that there are covered observation places at or near most of the exhibits.  So we were able to go from exhibit to exhibit without getting too wet.  Unfortunately, it rained the hardest when we were watching the giraffes, so I didn’t get any photos there.  But we noticed that they have a little stand there where you can buy food to feed the giraffes for $5.  We would have done it if it hadn’t been pouring rain (and despite my recent experience of a giraffe trying to eat my face). 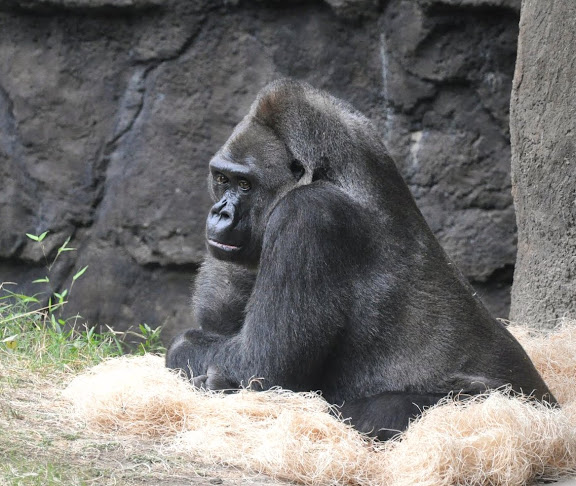 One of our favorite parts of the Zoo was the gorilla exhibit.  As with the other animals, there were clear partitions where you could closely observe the gorillas, but still feel safe. 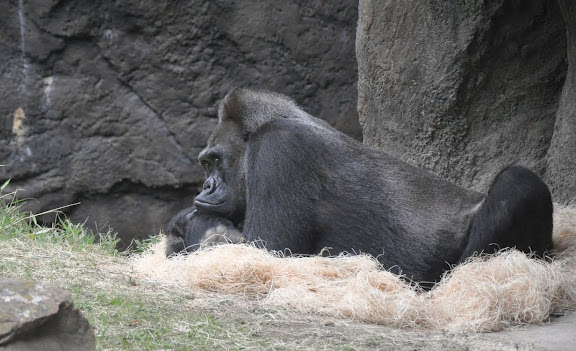 At one point, this gorilla put his/her chin down as if he/she was bored. 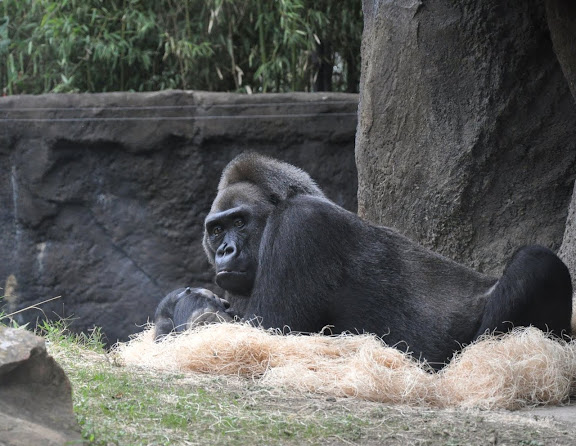 Then looked at me taking pictures.  Um, hi? 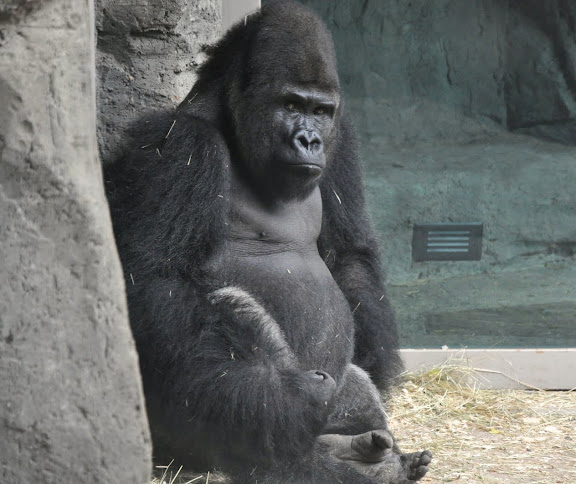 Another gorilla was sitting in a corner of the observation area, so we went over to check him/her out. 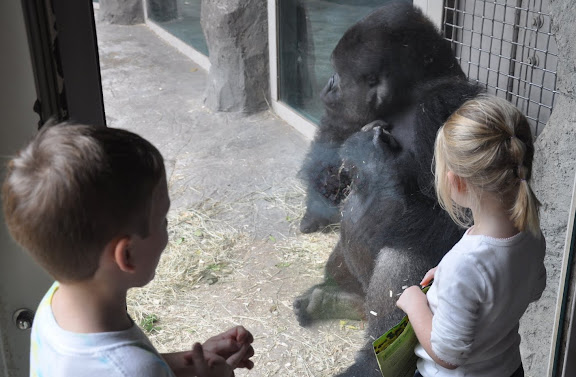 Crazy to see the kids this close to the gorilla.   They were so quiet and respectful and just watched. 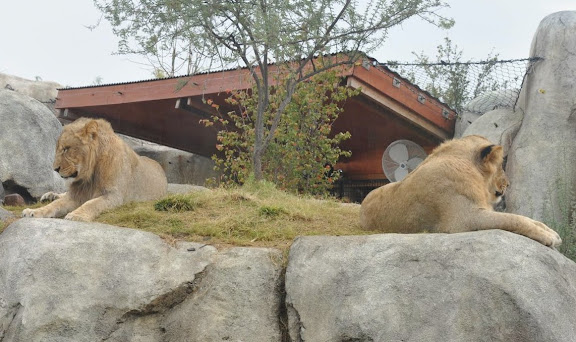 Then we saw lions chilling out in the rain. 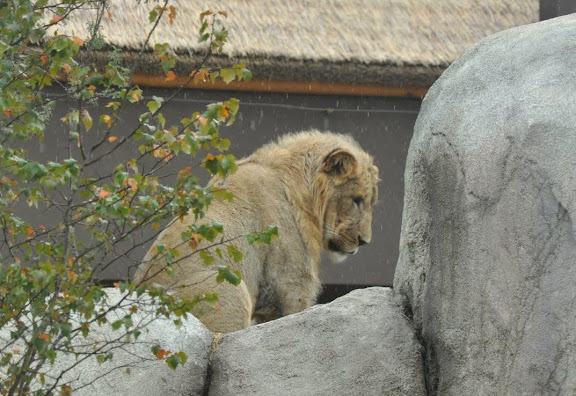 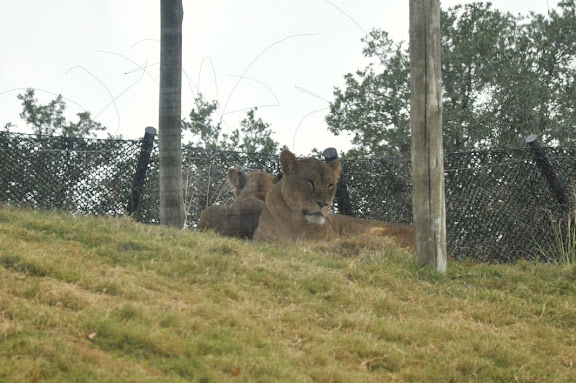 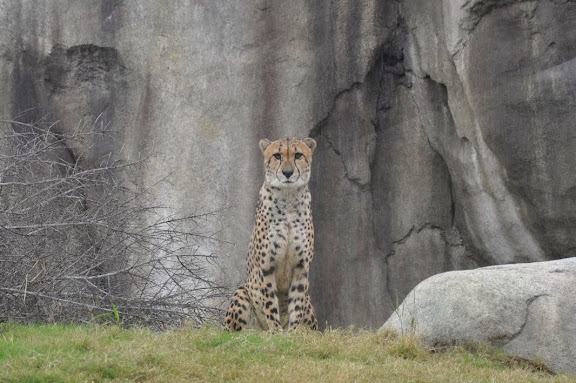 By far one of the coolest exhibits we happened upon was the cheetah exhibit.  We came around a curve and saw this one looking at us. 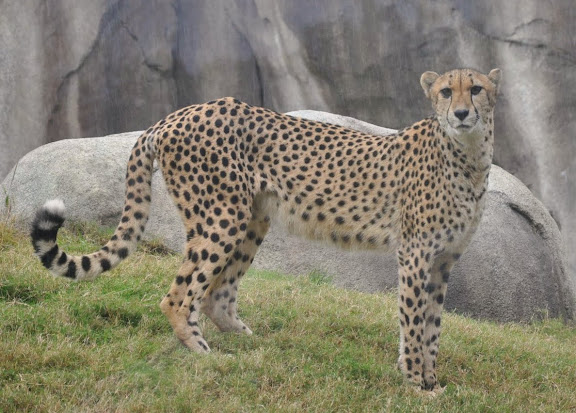 There were several cheetahs walking by as we watched, seeking a bit of shelter from the rain. 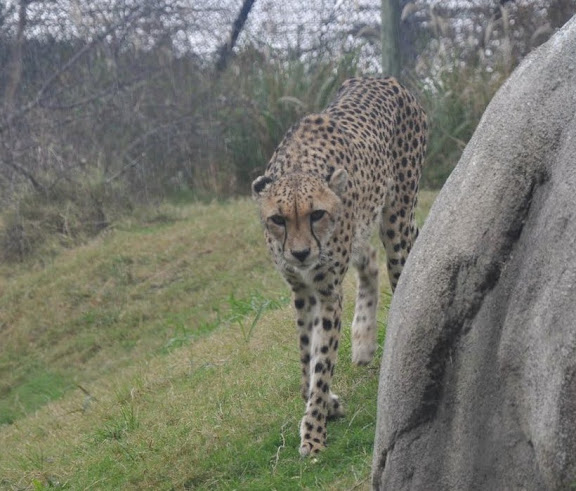 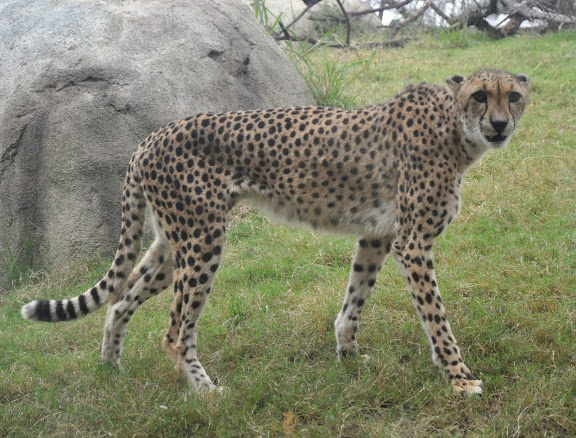 They just look fast, don’t they?  Overall, we had a wonderful time at the Zoo and would definitely go again.  We would have liked to have spent a little more time at the safari area, and the kids would have loved to ride the monorail, but we got rained out of both.  I’m sure there will be even more to see the next time we go.