Dan has been interested in molecular gastronomy for a while.  Who knows, maybe the science part of it appeals to the patent lawyer in him.  Or it’s the prospect of new cooking tools.  Or perhaps some combination of both. . . . He has particularly been wanting to try sous vide, which is a method of cooking food sealed in an airtight plastic bag in a water bath at a precise, low temperature for a long time.  Part of the reason he is into this technique is because it is and has been used by up-and-coming chefs, and was recently translated to the home chef via a relatively new cooking toy tool.  So I decided to surprise Dan with a sous vide machine for his birthday this year.  For the inaugural use, Dan chose top round roast.  It turned out great, and Dan looks forward to much more experimenting with his b-day gift.   In case anyone is curious, I’m really interested in jewelry featuring various precious gems, and my birthday is in May. 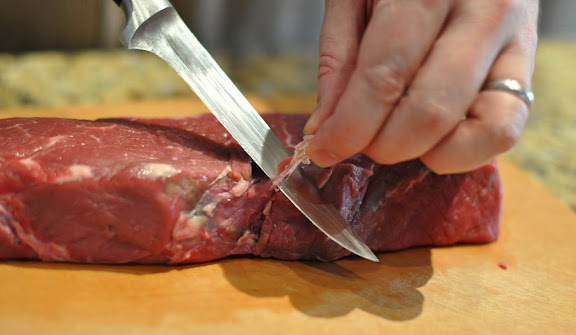 Dan picked top round roast because it is an inexpensive cut of beef with a pronounced “beefy” flavor, and it can be a little more tough in texture.   To address this, one of the advantages about sous vide is that the long cooking time tenderizes tougher cuts of meat, such that the end result tastes like a much higher quality cut.  The first step in cooking the beef is to trim the visible fat. 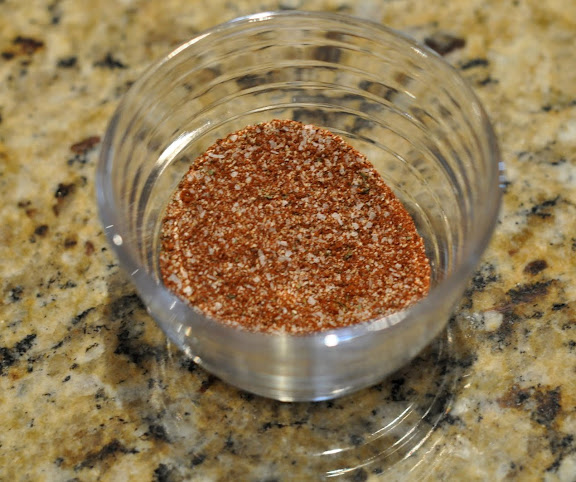 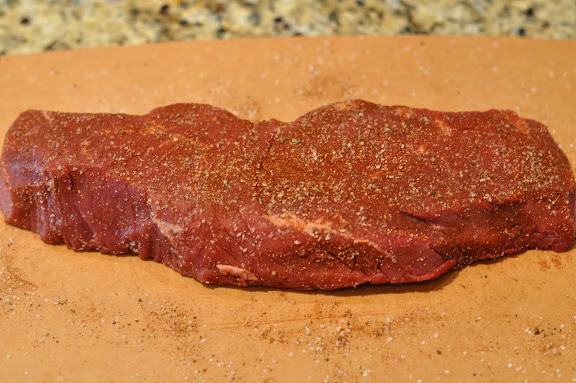 Generously coat the beef with the rub on all sides. 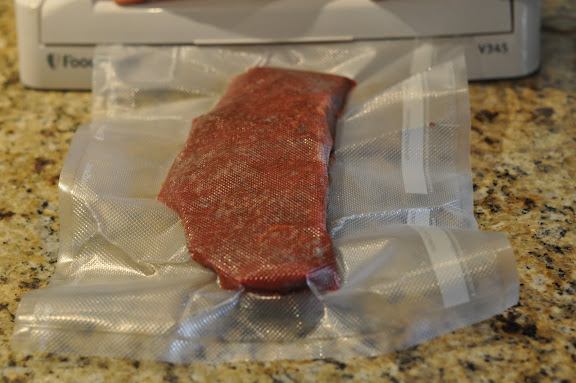 One of the key elements to sous vide cooking is vacuum sealing the food.  We were gifted with this appliance several years ago (thanks Mom and Dad!), and it is perfect for sous vide.   Once the meat is sealed, refrigerate it for about 3 hours to allow the rub to permeate the beef. 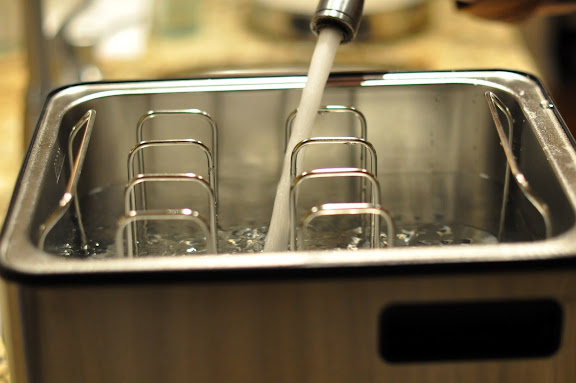 When it is time to start cooking, fill the sous vide machine with cold tap water up to the “Max Fill” line on the inside of the machine. 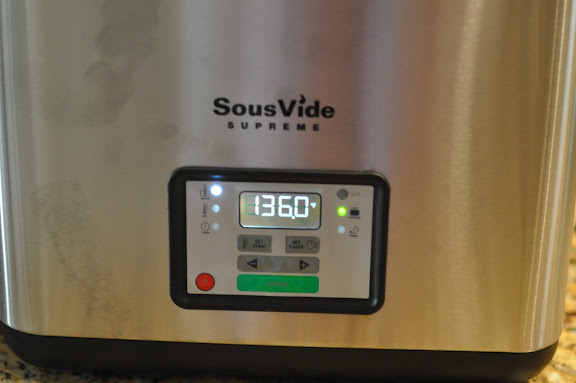 Then program the machine to the desired temperature.  For this beef recipe, Dan programmed it to 136 degrees, with the goal of medium to medium-rare beef once it was done. 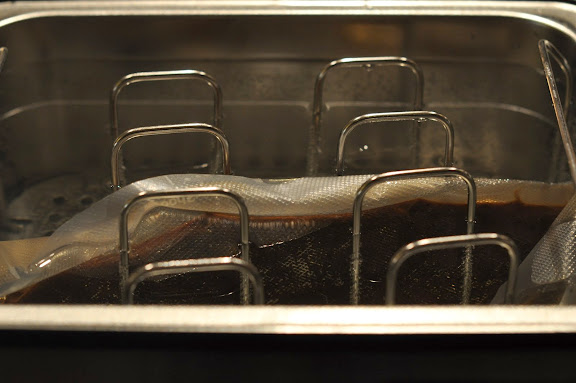 Then add the beef to the sous vide machine, fitting it between the metal slots.  Dan cooked this beef for 19 hours.  No magic to the number — that just happened to be the amount of time between starting the sous vide machine and getting the beef ready for dinner.  Dan says that the beauty of sous vide is that the beef cooks at a precise temperature, so it can never overcook, regardless of how long it stays in the hot water bath.  When I asked him what might be the minimum cooking time for sous vide of beef, Dan said not to ask him that question because he doesn’t know.  So let’s move on. 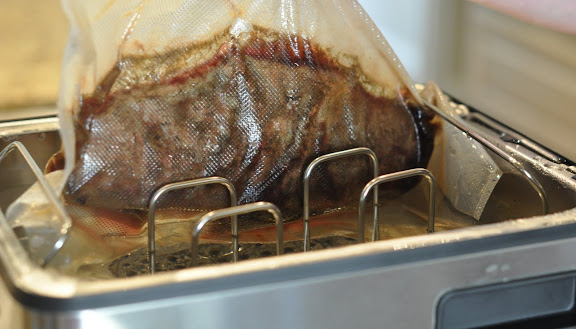 Photo-op, checking on the beef part-way through the cooking process.  Not this beef’s most photogenic moment, I have to admit. 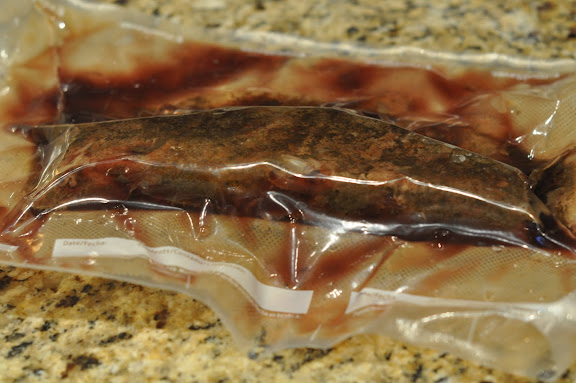 Nor is this.  After 19 hours, Dan took the beef from the sous vide machine and let it rest for about 15 minutes (still in the vacuum-sealed wrap.) 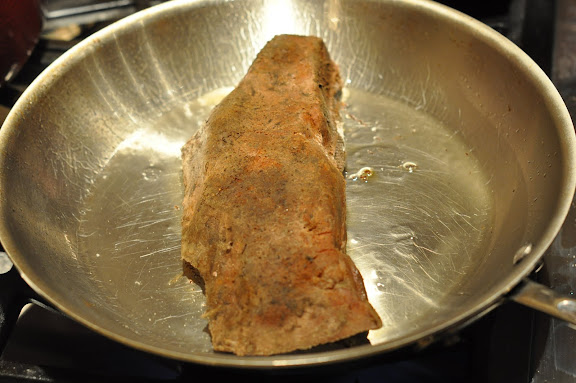 The beef looks even less appetizing when it comes out of its vacuum-sealed wrap.  Luckily, Dan read up on the process and knew that searing the beef on both sides in olive oil in a hot skillet would not only make it look more appealing, but would add a nice crust and delicious flavor. 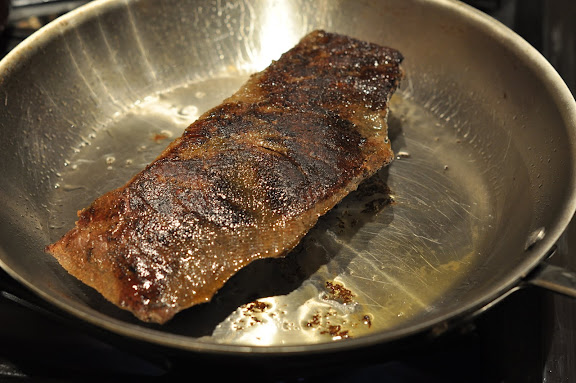 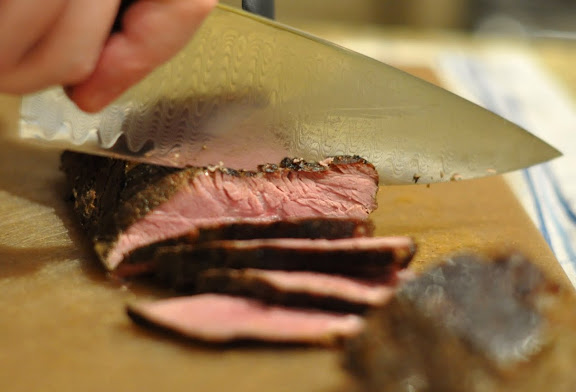 One of the best things about sous vide cooking is the ability to cook the meat to a completely even and perfect medium-rare quality (or whatever done-ness you prefer.) 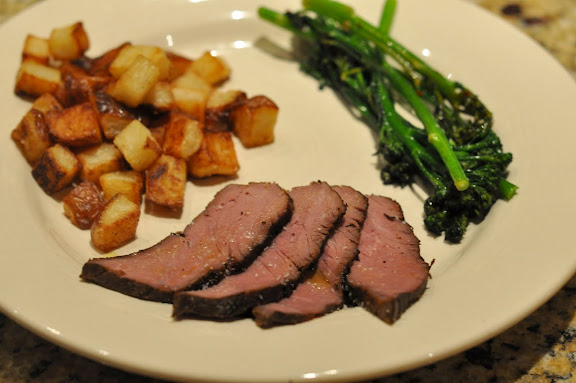 We served the beef drizzled with really good olive oil and some sea salt, then accompanied by roasted potatoes and sauteed broccolini.  It was delicious, but I have to be honest and say that I didn’t really notice a difference between this and other steak Dan has prepared in more traditional ways.  But, I’m also not much of a connoisseur of beef, nor do I have a very sophisticated palate.   Dan was very happy with the outcome because he thought that this relatively tough cut of beef ended up very tender after cooking for 19 hours, and the whole process was much more simple than he had anticipated.  (And thankfully, his eyes have rolled back into their sockets after reading that I could not tell a difference between this and other steak.)

Stay tuned for our next sous vide adventure, which apparently involves transforming boneless chicken breasts — the most bland of all proteins — into something delicious and interesting.  A sous-vide-style poached egg or two might also make an appearance at some point.