You are probably thinking that pasta shells stuffed with Thanksgiving leftovers sounds pretty weird.  And that the ingredients (leftovers, mayo, and cream/mozzarella/parmesan cheeses) don’t look very appetizing.  We thought the same thing.  But, lucky for you, we decided to try it anyway and discovered a delicious and easy way to use up Thanksgiving leftovers.  We found the recipe on allrecipes.com, one of our favorite recipe sites.  We read a lot of the reviews from people who had tried the recipe and discovered that most of them were excellent, so we figured the recipe was worth trying.   We were not disappointed — the recipe is an interesting way to combine our favorite Thanksgiving flavors (gravy, turkey and stuffing) into a somewhat lighter meal that didn’t result in the usual Turkey Day food coma. 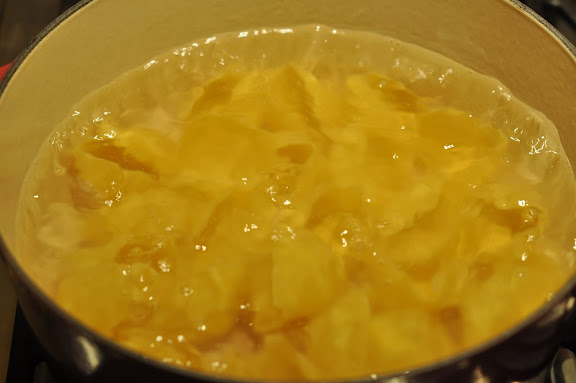 Boil the pasta according to the package directions, but for a minute or two less because the shells will go in the oven once they are stuffed. 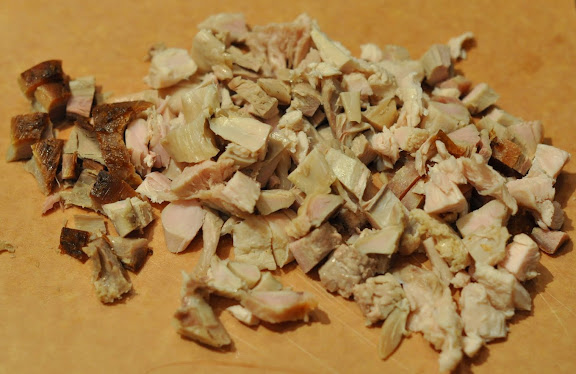 Dice up some turkey — white and dark meat, whatever you have left.  The recipe calls for 2 cups, but we halved the recipe. 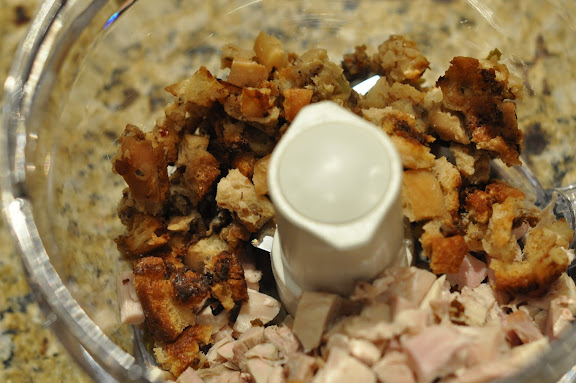 Put the turkey and about 1 cup of stuffing in a food processor, then pulse until they are finely ground and mixed. 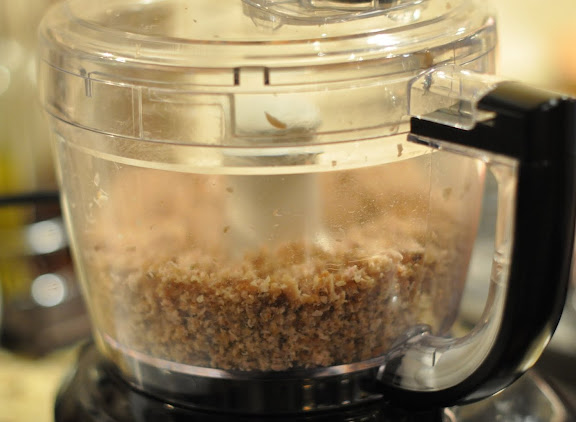 We don’t use our food processor very often, but when we do, we sure appreciate its greatness. 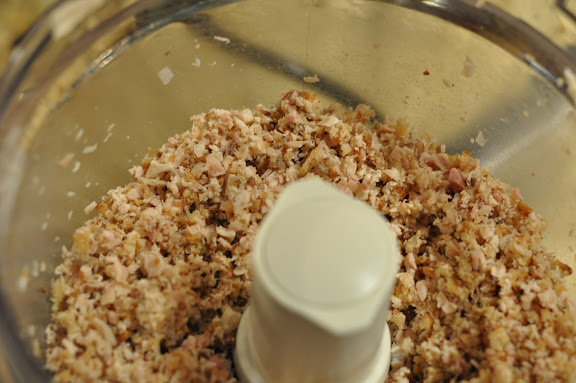 Imagine having to finely chop these ingredients by hand! 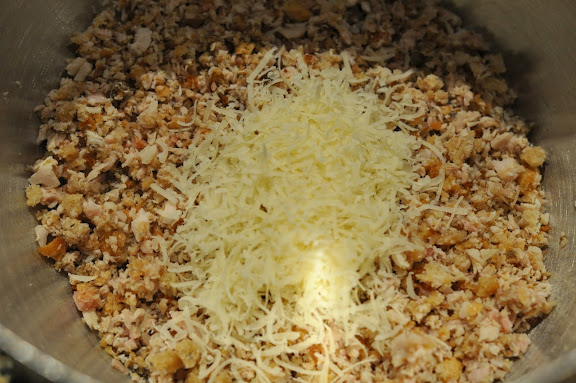 Transfer the turkey and stuffing mixture to a mixing bowl, and add 1/4 cup grated parmesan. 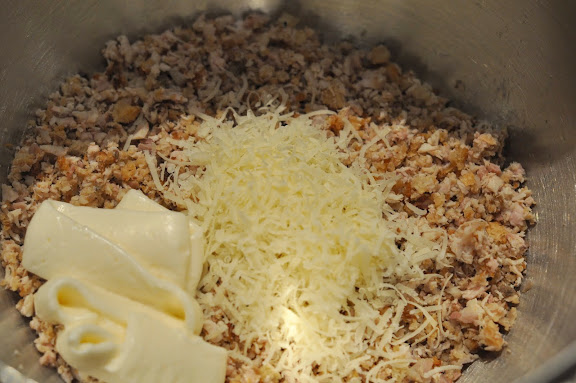 Add about 1-2 tablespoons of mayonnaise (we used light). 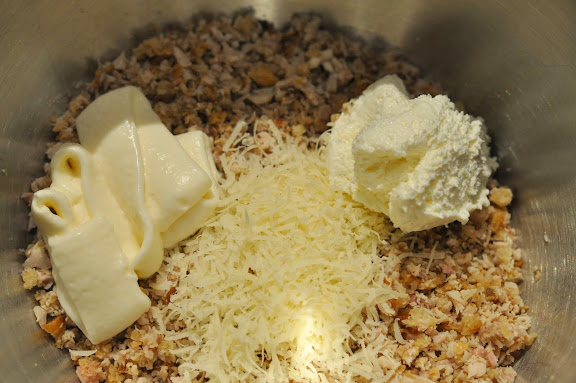 Add about 2-3 tablespoons of cream cheese (we used lowfat). 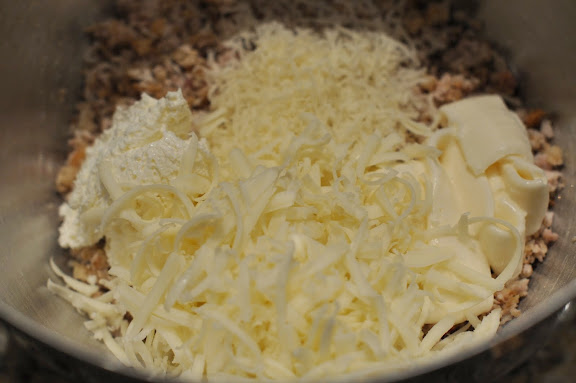 Finally, add about 1 cup of grated mozzarella cheese (I don’t think it was light or lowfat – does mozzarella cheese even come that way?)  While you’re grating the mozzarella, grate another cup worth and set aside to be sprinkled on top of the shells. 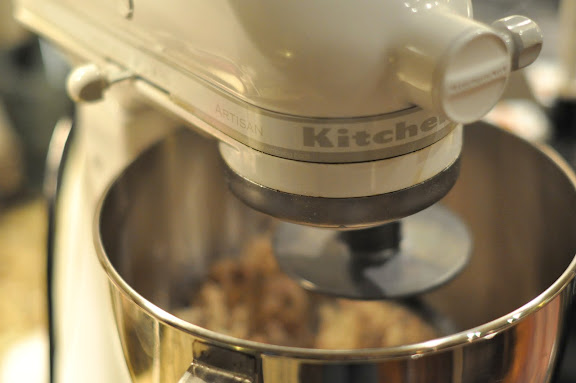 Mix the ingredients together with the paddle attachment on medium-low until everything is blended well. 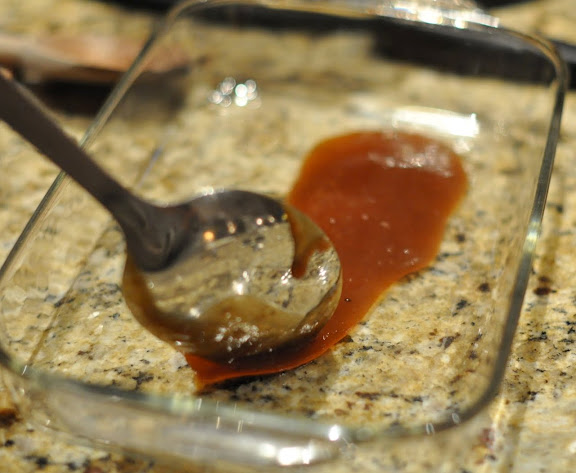 Spread a layer of The (leftover) Best Gravy Ever on the bottom of a baking dish. 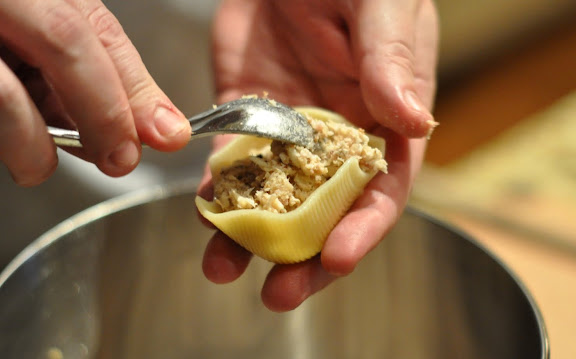 Stuff the shells with the turkey/stuffing/cheese mixture. 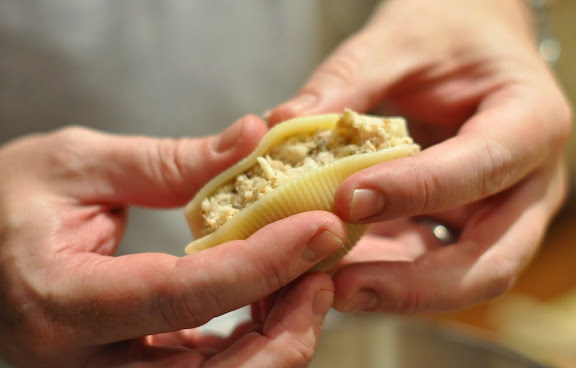 For some reason, this process seemed to be a lot easier than the last time we made stuffed shells.  Maybe because the stuffing mixture isn’t sticky. 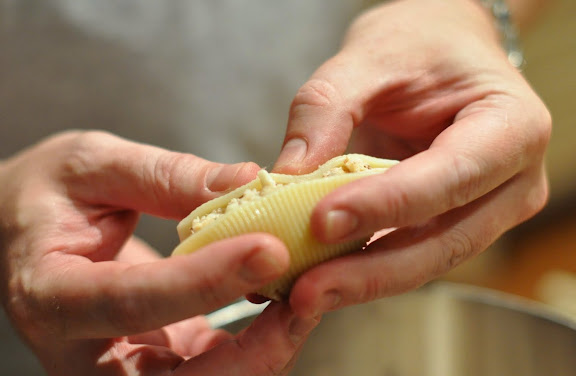 Close up the shell so the seams are touching. 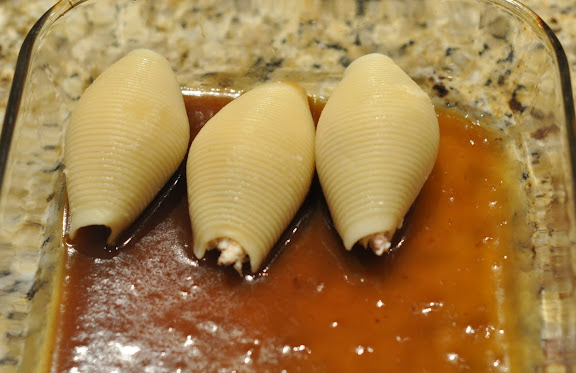 Place the stuffed shells in the baking dish with the gravy, shell seam side down. 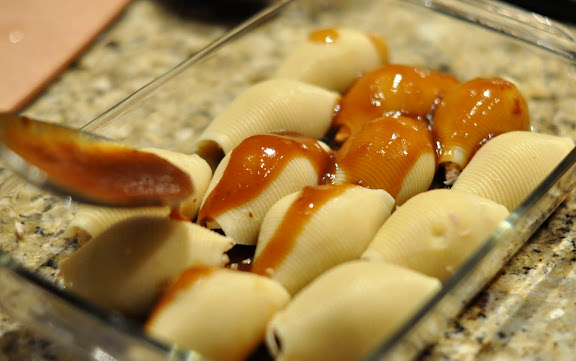 Spoon more gravy over top of the shells. 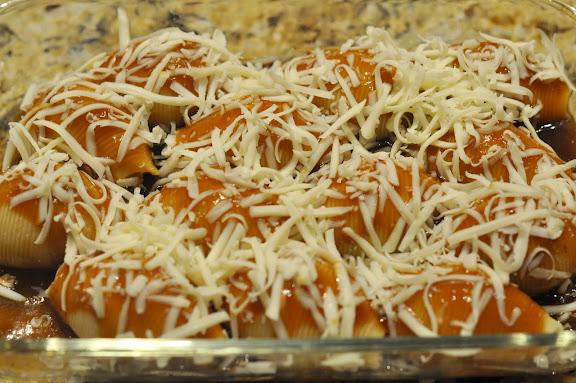 Then sprinkle on the rest of the mozzarella cheese.  After the shells were done, we concluded that a little more cheese would probably have been better (isn’t it always?) 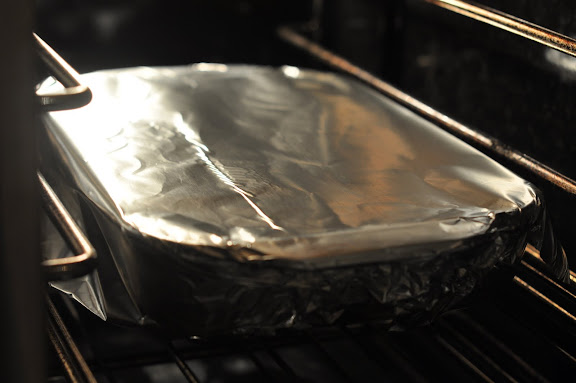 Cover the shells and cook them in a pre-heated 350 degree oven for 30-45 minutes. 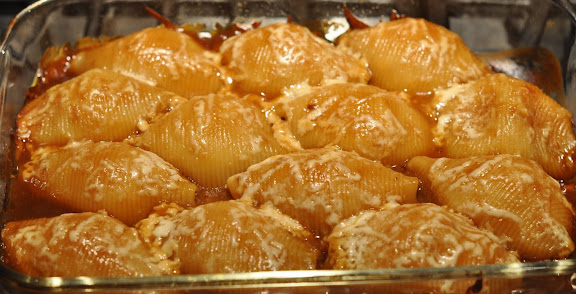 Uncover the shells and cook them for another 10 minutes or so.  (This could have been a good time to add more cheese). 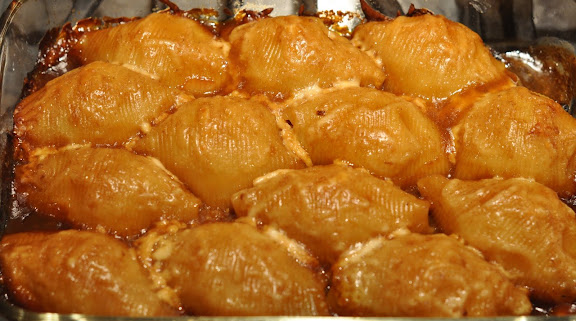 After the shells are done, allow them to cool for about 5 minutes. 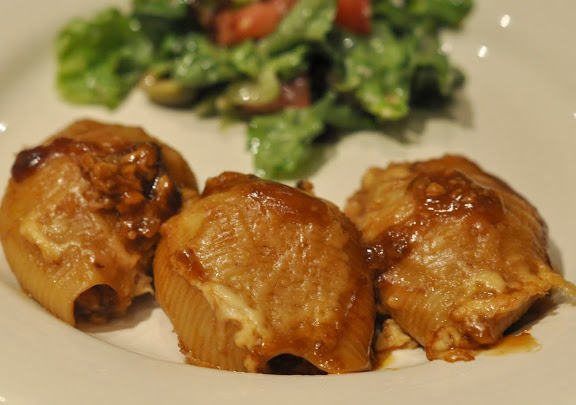 We served ours with a simple salad.  This recipe used up the last of our Thanksgiving leftovers, and we loved that it still tasted like Thanksgiving, but with a bit of a twist.  So, let that be a lesson — don’t be afraid to try new recipes, even if they sound a little odd, and read reviews of other cooks who have tried recipes you are considering!