For the Super Bowl this year, we served one of our bar-food-at-home favorites, grilled wings.  We did the buffalo version and tried a new Asian-style as well (which I ended up loving even more than the buffalo-style.  Updated post coming soon.)  Because the wings were our dinner that night, I wanted to serve a healthy side dish, preferably one involving vegetables.  The two possibilities that immediately came to mind were celery salad and cole slaw.  Our much-loved celery salad recipe seemed a bit too fancy for wings and football, and we thought this flavorful hot & sour slaw would compete with the flavor of the wings a bit too much.  Instead, we combined elements of each into a lighter, sweet-yet-tangy coleslaw with tons of celery flavor.  Win, win. 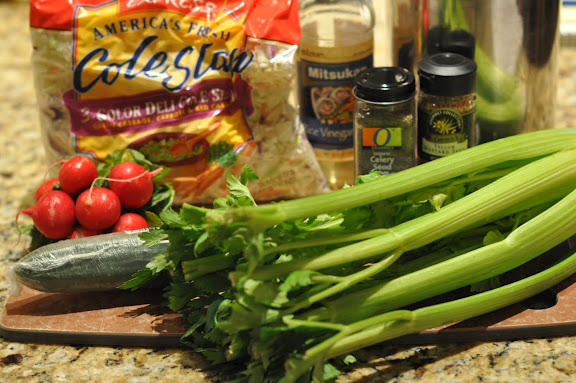 I must give credit and thanks to my aunt for passing along her version of her Grandma Mary’s coleslaw, which served as the basis for the dressing in our celery slaw — Thanks Aunt Lynne!  The dressing ingredients are simple:  rice vinegar, water, celery seed, mustard seed and sugar (a lot less sugar than the original version, which called for 2 cups of sugar!  Grandma Mary apparently had a sweet tooth.)  The slaw ingredients include celery, radishes, cucumber and cabbage.  We used the pre-shredded, store-bought, coleslaw-in-a-bag because it incorporates both red and white cabbage, along with carrots.  Okay, let’s be honest, we used the bagged cabbage because we were too lazy to chop up our own cabbages and carrots.  Typing this sentence took more effort than using the store-bought slaw. 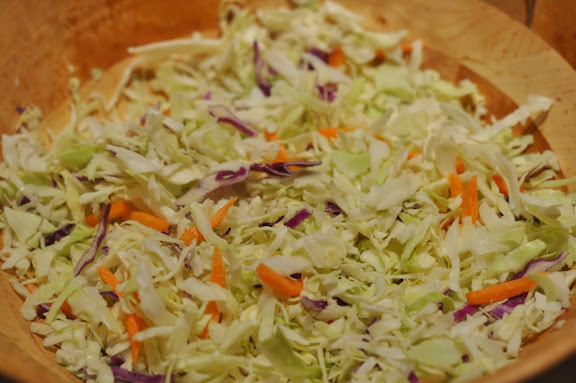 If you’re more ambitious than us and chop your own cabbage, you may need to sweat out some of the moisture.  Sprinkle about a teaspoon of salt over the cabbage and let it sit for about an hour. 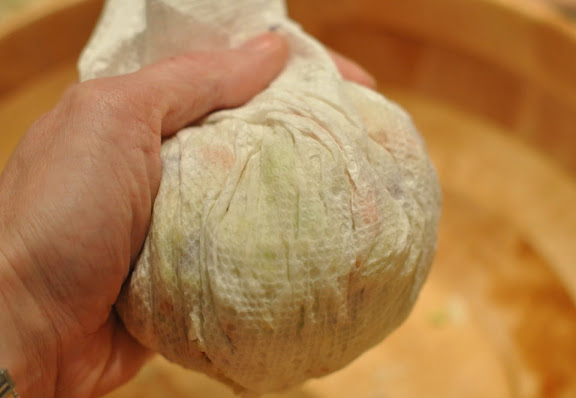 Then drain the cabbage of any excess moisture.  This step didn’t seem to be all that necessary for the bagged cabbage.  Yet I did it anyway. 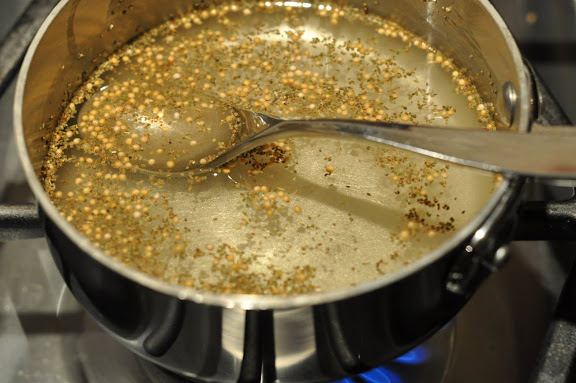 Combine the rice vinegar, water, sugar, celery seed and mustard seed in a small pan, bring to a boil and simmer, stirring occasionally, until the sugar is fully dissolved — about 2-3 minutes.  Allow the dressing to cool to room temperature. 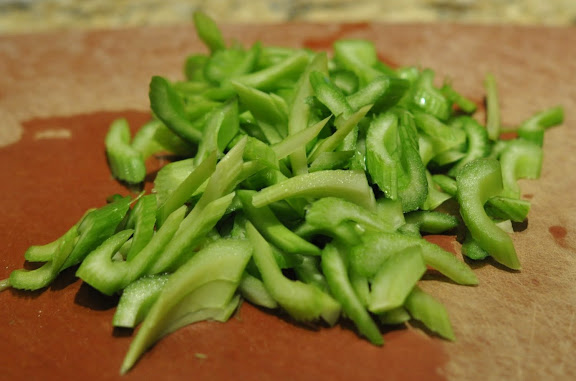 Slicing the celery on the diagonal makes for bigger pieces and more celery flavor in every slaw bite. 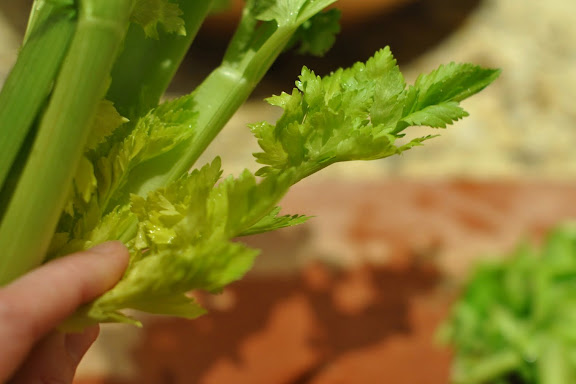 Be sure to chop up some of the tender leaves from the inner celery ribs for even more celery flavor in the finished slaw (we didn’t name it “Celery Slaw” for nothin’!) 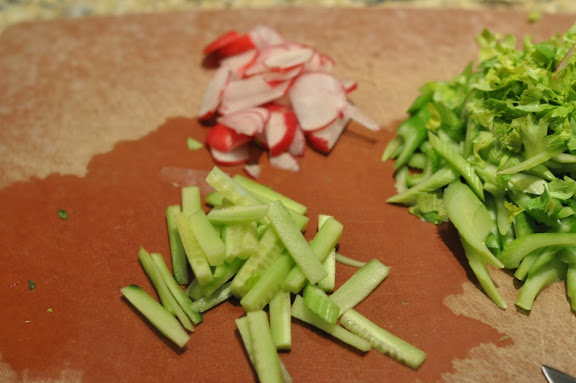 Peel and de-seed the cucumber, then cut it into thin slices.  Also thinly slice the radishes.  Omit the radishes if you don’t prefer them, but we thought they added a nice bite to balance out the sweet/tangy flavors of the slaw. 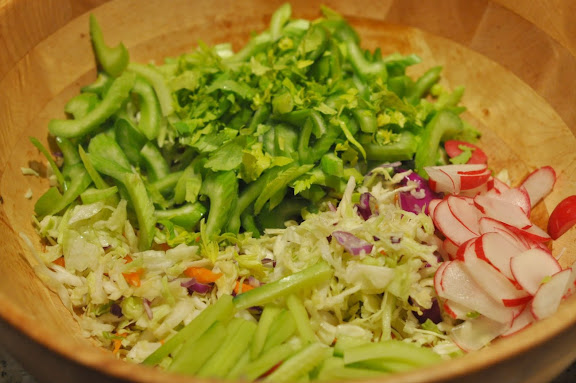 Combine all the vegetables in a large bowl and toss them together. 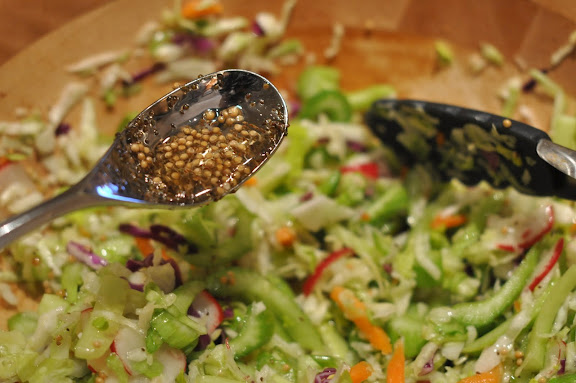 Slowly add dressing to the slaw and keep tossing until the veggies are well-coated (but not swimming.)   Once the slaw is dressed to your liking, spoon just the seeds from any remaining dressing over the slaw to give it more flavor without too much liquid. 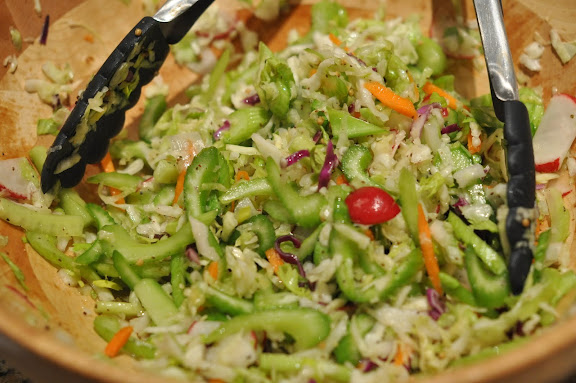 The resulting slaw paired perfectly with our buffalo and Asian-style wings — providing cool and crisp flavor “time-outs” in between spicy bites of wings.  The slaw would also go well with BBQ or any other main dish incorporating bold flavors.  It also somehow stays fresh, even dressed, stored in the fridge for several days.  Side dish MVP!