Dan’s favorite season has finally begun.  No, not Fall — it’s Football Season!  While I don’t share Dan’s love of the NFL, his penchant for watching games allllllll day on Sunday, or his obsession with tracking the scores from BOTH of his fantasy football leagues, I will support the marriage team by watching Steeler games, and I do enjoy the food that comes with this time of year.  This season, we decided to cook some of our football-watching bar food favorites at home, starting with buffalo wings.  We researched several recipes, expecting to find at least one with some secret ingredient for making the buffalo sauce so delicious.  Turns out that there really is no secret, or if there is a special ingredient, it’s being kept secret.  Pretty much all the recipes we found called for the simple combination of “hot sauce,” butter and vinegar.  In some recipes, the wings were grilled, others called for frying them, and some required baking them in the oven.  In the interest of making them just a teeny bit more healthy, we decided to grill our wings.  The resulting grill flavor complemented the buffalo sauce nicely.  We’ll make these again and maybe tweak the sauce a bit to come up with our own secret ingredient. 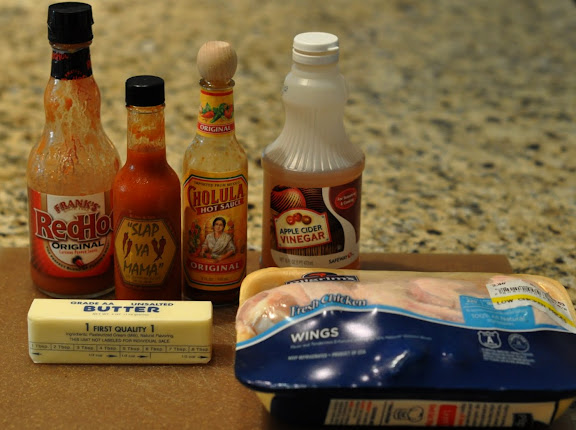 Most of the recipes we found included “hot sauce” as an ingredient, without specifying what kind of hot sauce.  Maybe that’s the secret that no one is telling — some brand of crazy good hot sauce that we don’t know about.  We decided to combine a variety of sauces until we got just the right flavor. 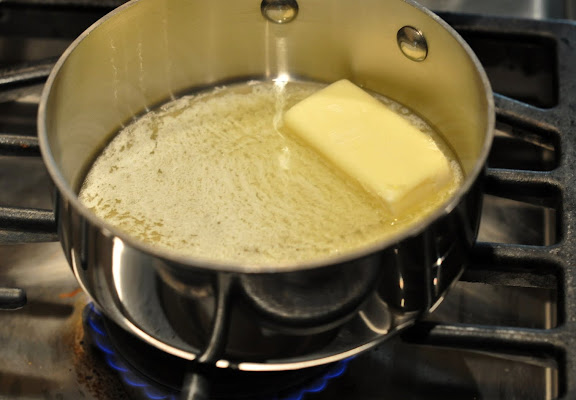 Start the sauce by melting the butter.  Unfortunately, there really isn’t a way to make this step more healthy  — butter makes it better. 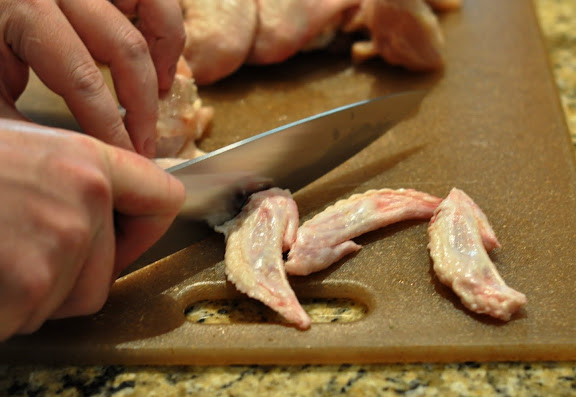 While the butter melts, prepare the wings by cutting off the wing tips.  This would also be a good time to cut apart the skin and membrane between the wingette and the drummette parts of the wing, making it a lot easier to pull these portions apart when eating the finished wings.  We know this because we didn’t do ours that way the first time. 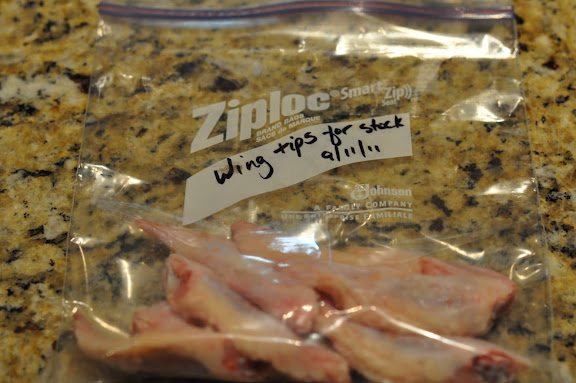 Save the tips in the freezer for the next time you have enough leftover chicken bones / pieces to make stock. 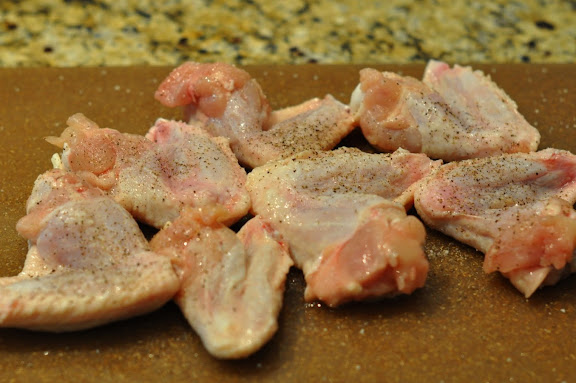 Toss the wings in some olive oil or vegetable oil and season them on both sides with salt and pepper. 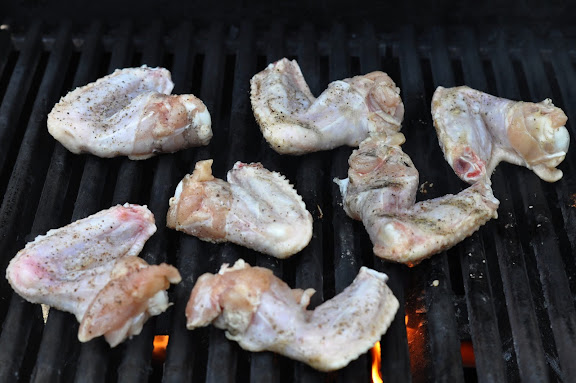 Grill the wings over direct heat for about 8 minutes total to get a good sear. 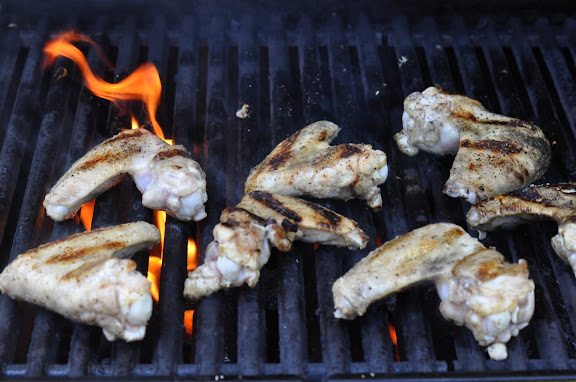 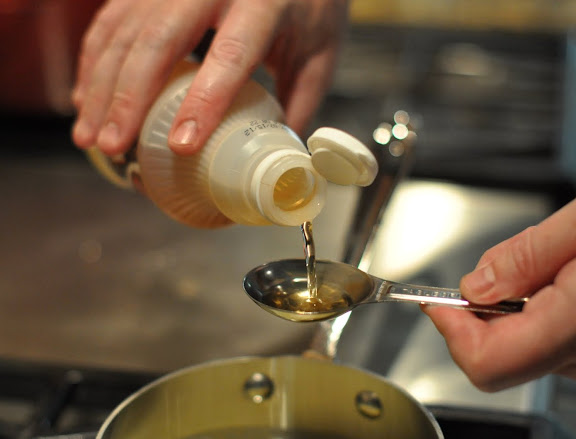 Add about 1.5 tablespoons of vinegar to the melted butter.  We used apple cider vinegar, but some recipes call for white vinegar. 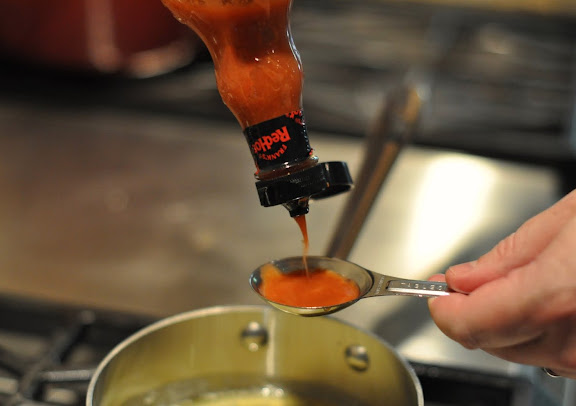 We started our little hot sauce experiment by adding equal parts of each hot sauce to the butter and vinegar.  Then we kept tasting and adding hot sauce until we got it the way we wanted it.  First, we added Red Hot.  Every time we use Red Hot, we think of Dan’s old friend and college roommate who used to add it to everything — even Hamburger Helper.  It was his absolute favorite condiment.  (Hi Steve!) 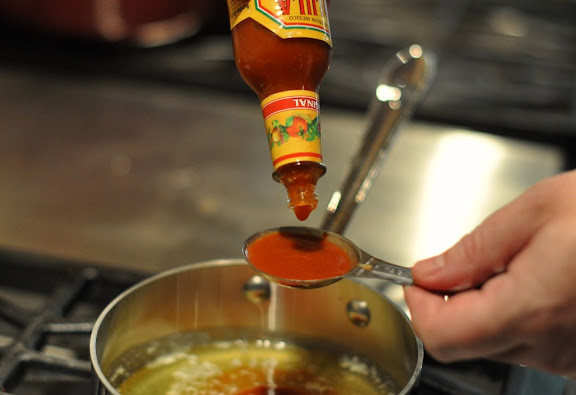 Next we added Cholula.  This particular hot sauce is really good on eggs and comes in multiple flavors (original, chili garlic, chili lime and chipotle.)  The chili garlic flavor is best on eggs, but we used the original version for the buffalo sauce. 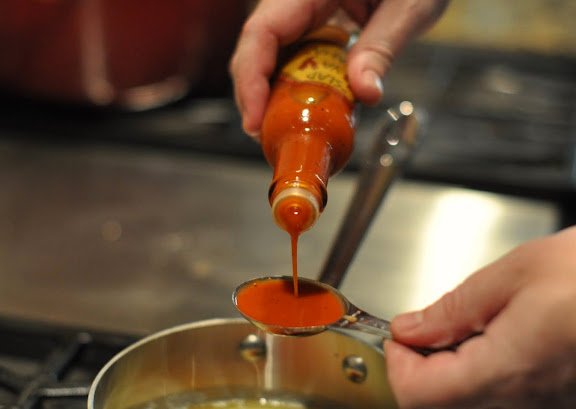 Finally, we added a little “Slap Ya Mama.”  This is a Cajun hot sauce that we discovered at one of my brother’s annual crawfish boils.  It’s got great flavor and an even better name. 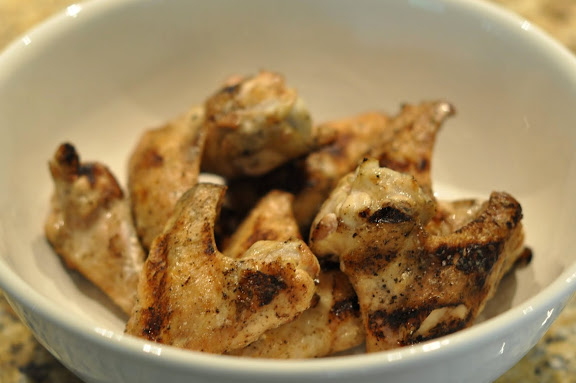 Pour the sauce over the wings and toss them around so they get coated with buffalo goodness. 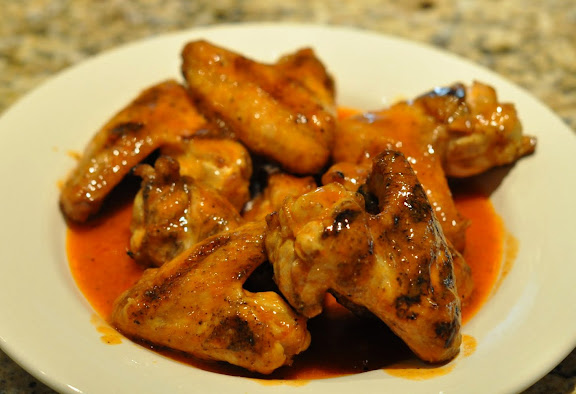 We served our wings that game day with celery sticks and ranch and blue cheese dressings for dipping.  Celery salad would also go well with these wings.  We consider our first home-cooked buffalo wing experiment successful — they were just as tangy and spicy as the bar-food verion, but the sauce didn’t turn out quite the same as restaurant style.  It was a little more runny than we prefer and didn’t really stick to the wings as well as we would have liked.  Next time we might try basting the wings with sauce while they cook over indirect heat so that some of the sauce cooks into the chicken.  If it works, we’ll post an update here.  We’ll also share our buffalo sauce secrets if we come up with any.  In the meantime, Go Steelers!