As you may be aware, one of us here at Foodie Lawyer is a big fan of football generally and the Pittsburgh Steelers in particular.  We even got to see the Steelers play in the Super Bowl last year (note that I said “play,” and not “win.”)  For this football season, we thought it would be fun to try out various “football foods” — dishes that are typically served at sports bars — but cook them ourselves at home, hopefully making them slightly more healthy yet just as tasty.  Our first endeavor turned out really good, so we decided to tackle (get it?) potato skins next — typically one of the more unhealthy fried favorite sports bar foods.  (Fun Fact:  according to Wikipedia, the potato skins appetizer was created by T.G.I. Friday’s in 1963.)  We baked ours instead of frying them and they turned out great.  Not quite as crispy as the restaurant version, but crispy enough with a thin layer of creamy potato.  These would be fun to serve at a football-watching party, with various toppings and dipping sauces to create your very own Potato Skins Bar. 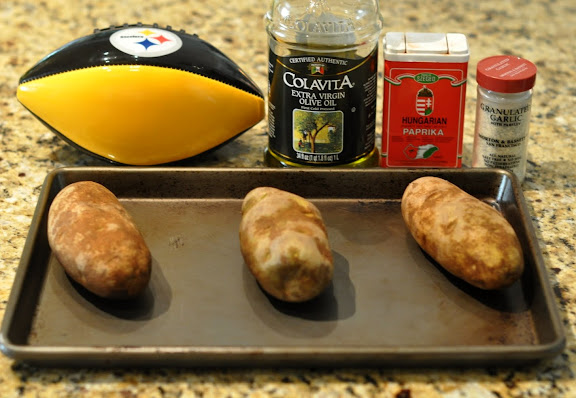 We were inspired by this recipe for potato skins, which calls for buttering them with roasted-garlic-butter.  Garlic and butter — these are a few of our favorite things.  Upon reflection however, using granulated garlic in the butter would add subtle garlic flavor similar to the roasted garlic, but without the extra roasting step.  We also decided to add some paprika to the butter.  (And Dan decided to add his Steeler football to the photo.  The man is a fan I tell ya.) 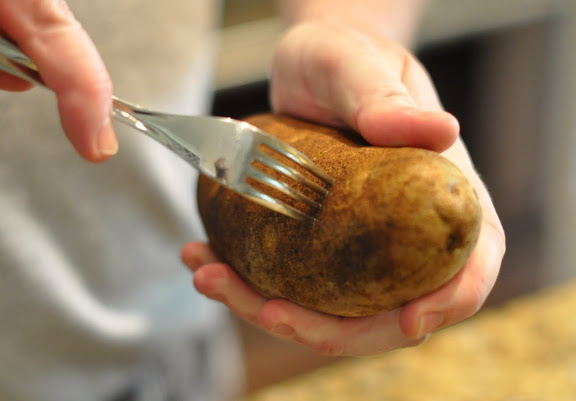 Start by washing the potatoes and piercing them with a fork a couple of times. 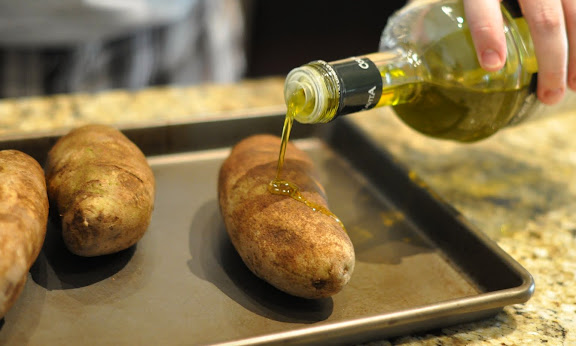 Rub a little olive oil all over each potato.  This helps the skin to get more crispy than it would otherwise.  Place the potatoes on a cookie sheet and bake in the oven preheated to 350 degrees for about an hour. 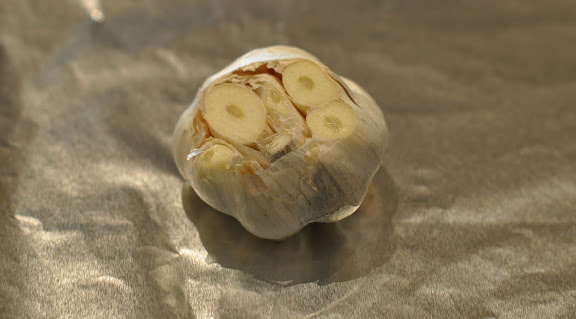 If you’re roasting garlic, cut off the top, wrap the head of garlic in foil and bake it with the potatoes.  The garlic will need to bake for an additional 15 minutes longer than the potatoes. 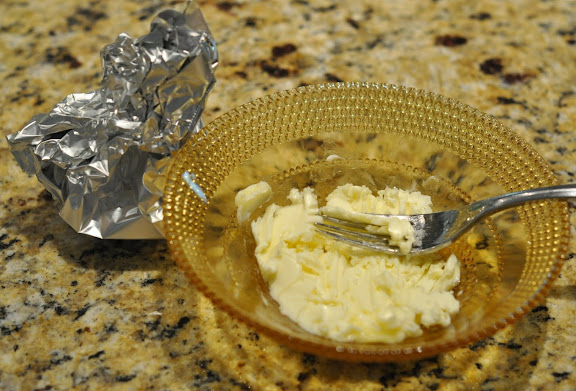 While the potatoes cook, bring the butter to room temperature and mash it into a paste-like consistency.  (How is it possible that I just made butter sound UNappetizing?) 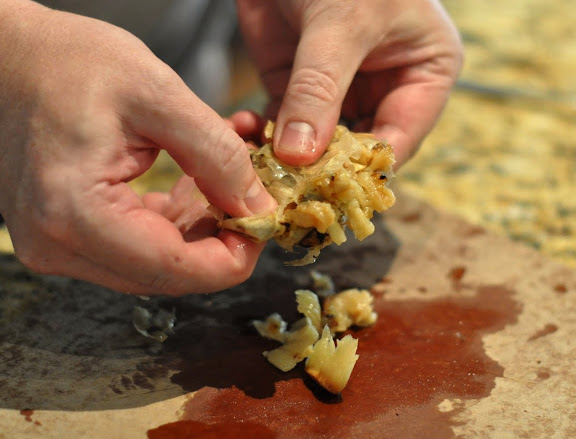 Squeeze the roasted garlic out of its skin.  (That sounds gross too — some food blogger I am.) 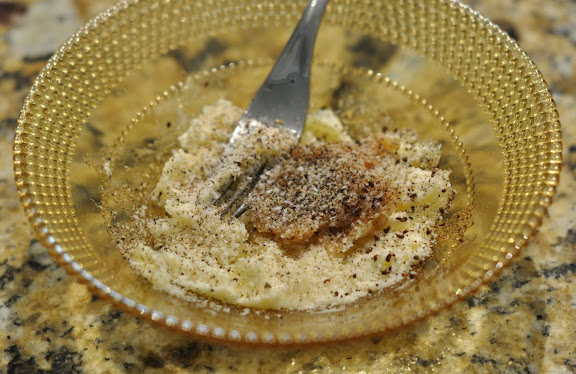 Add the roasted garlic (or granulated garlic), salt, pepper and paprika to the butter and stir it all together. 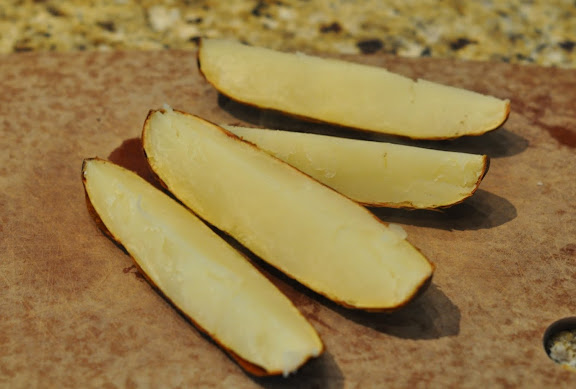 After they have cooled a bit, cut each potato lengthwise into 4 wedges. 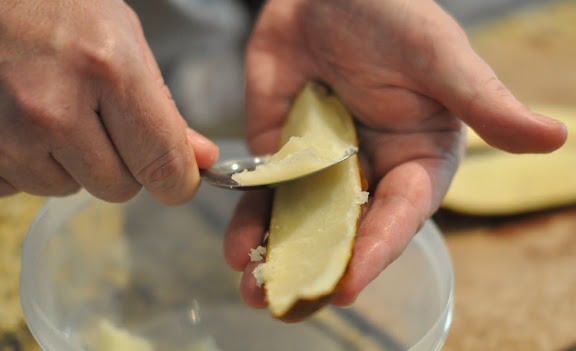 Scoop out most of the potato from the skin, leaving a thin potato layer intact.  Bonus points for planning ahead to make a side dish later in the week out of the potato remnants.  Smashed potatoes would be good. 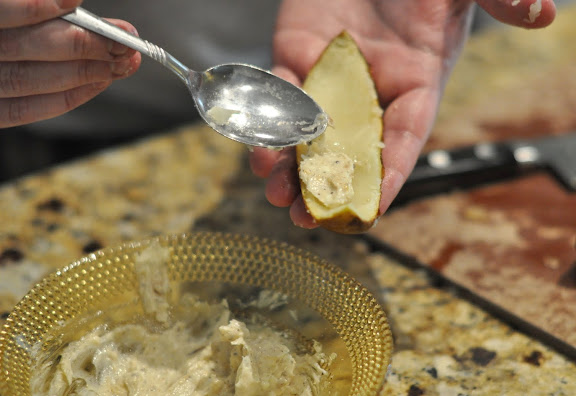 Spread the butter mixture on the potato part of each skin and place the skins on a cookie sheet. 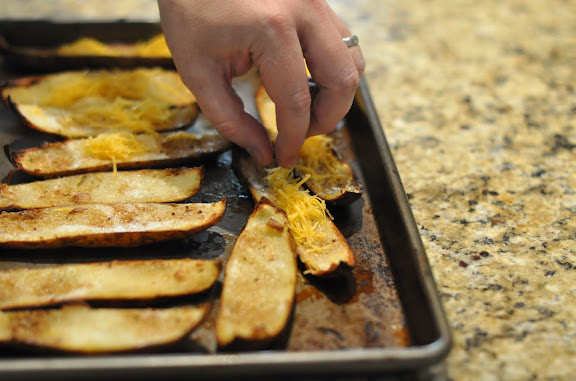 Add a little grated cheese and place the skins back in the oven at 425 degrees until the cheese melts and the skins get golden and crispy — about 20 minutes. 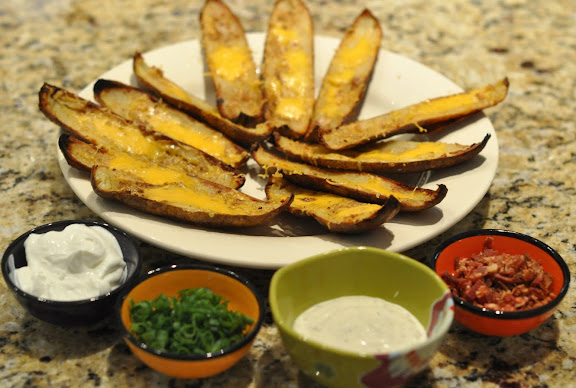