We love Asian food and eat it at least 3 to 4 times per month. In addition to favorites at local restaurants (the sole fish fillet in chili bean sauce from Lao Sze Chuan, wasabi shumai from Coast Sushi, and pretty much anything with kimchi in it from Joy Yee’s Noodles, to name a few), we have several go-to homemade Asian dishes that we often crave: Korean chicken, ponzu sea bass, beef & broccoli stir-fry, and Thai coconut curry soup. When we saw Ching-He Huang make her “Three Cup Chicken” on an episode of her show “Easy Chinese,” we had to try it as a potential addition to our homemade Asian recipe repertoire. It’s easy to make with ingredients we typically have on hand (since we cook Asian food at home fairly often): cooking oil; garlic; ginger; chicken thighs; soy sauce; rice wine (also called mirin); toasted sesame oil; brown sugar; and basil. The recipe needs a bit of tweaking to achieve the thickened, slightly sticky sauce that characterizes this dish, but it has just the right mix of Asian flavors we enjoy, and we’ll definitely make it again. 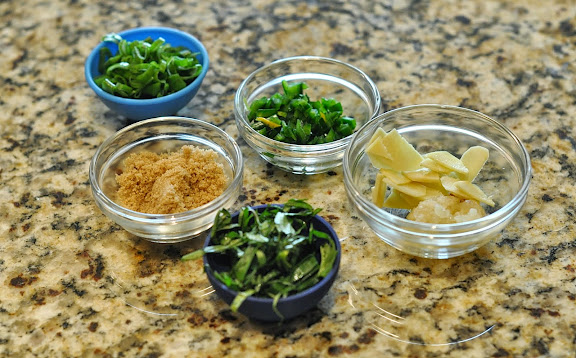 As many Asian recipes do, this dish comes together and cooks quickly, so it’s helpful to have all the ingredients measured and prepped before you start heating up the wok (or skillet). Finely chop (or mince) the garlic; peel and thinly slice the ginger; chop the basil; measure out the brown sugar, soy, rice wine and toasted sesame oil; and prep whatever garnish you prefer (the original recipe calls for a sliced Fresno chile, but we used chopped green onion.) We added a chopped jalapeno to the recipe for a little heat and depth of flavor. 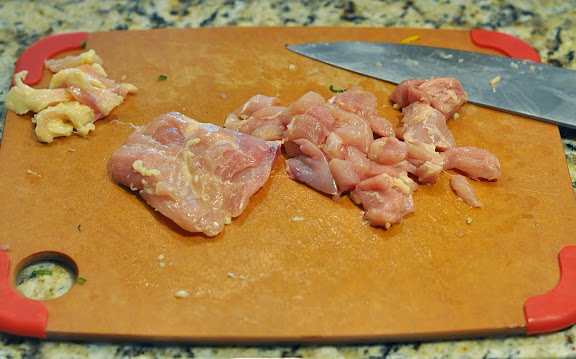 Prepare the boneless, skinless chicken thighs by trimming off the fat and cutting each thigh into bite-sized pieces. 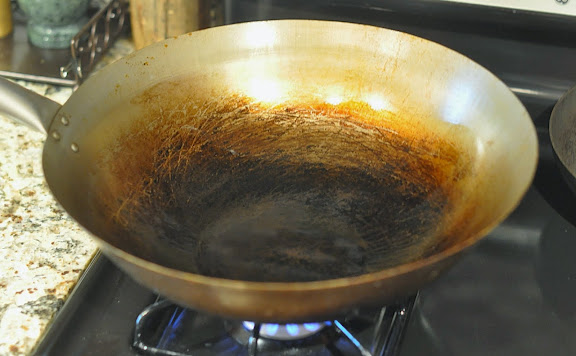 Heat the wok (or big skillet if you don’t have a wok) over high heat and add the cooking oil. The original recipe calls for peanut oil, but we didn’t have any so we used canola oil. 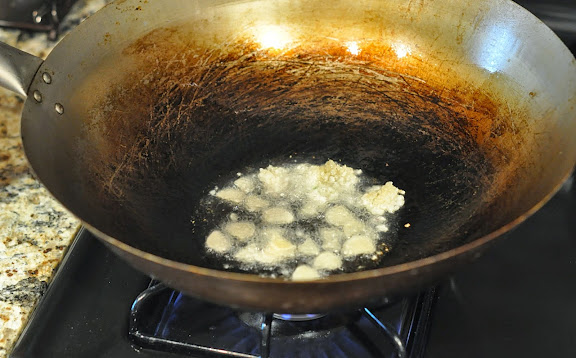 When the oil is very hot (should look a little shimmery), add the garlic and ginger and cook for a few seconds. 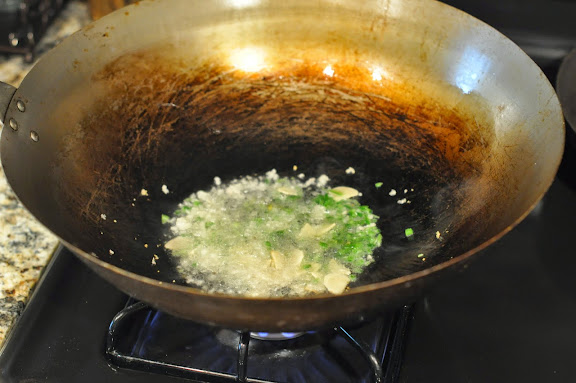 If using jalapeno, add it and cook for about a minute. 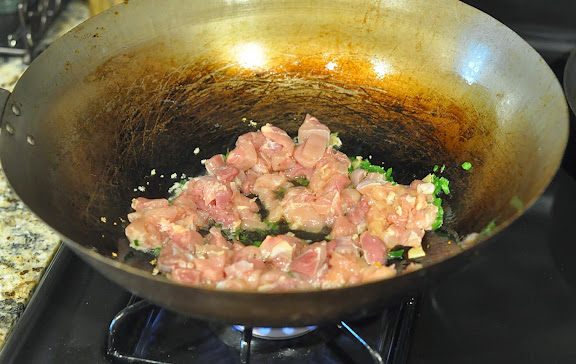 Add the chicken and let it sit (without touching it) for 30 seconds, then stir fry the chicken until it begins to brown — about 2-3 minutes. 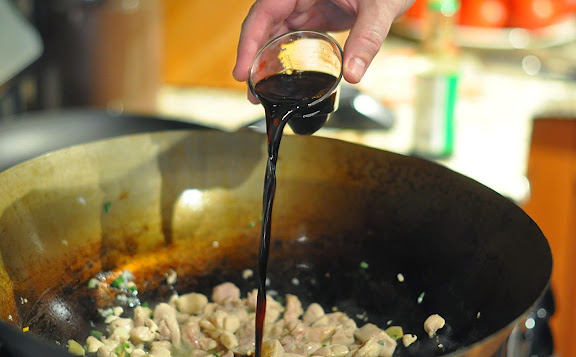 Add the soy, rice wine and toasted sesame oil to the wok, reduce the heat to medium and cook for about 6-8 minutes. According to the recipe, it’s important to use toasted sesame oil instead of pure sesame oil because the toasted version will reduce as it cooks but the pure oil will not. We used toasted oil and still had a little trouble getting the sauce to reduce and thicken, so we may change the sauce ingredient ratios next time to see if we can get a better result. 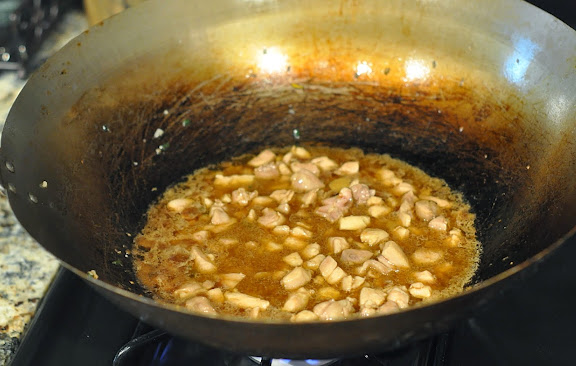 After about 6-8 minutes, add the brown sugar and bring the mixture to a boil. The original recipe then calls for lowering the heat to medium-low and simmering for about 5 minutes until the chicken is done and the sauce reduces to a thick, sticky consistency. 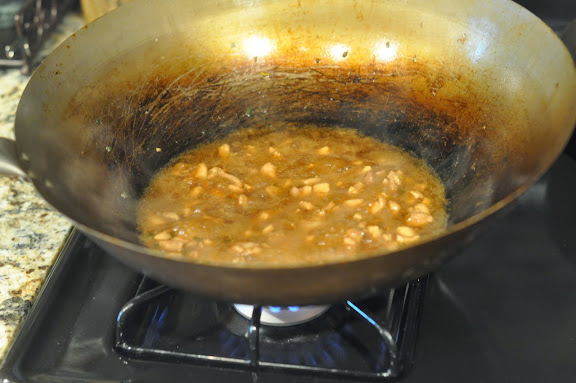 After 5 minutes, the sauce didn’t seem to have reduced much at all. Same result after 5 more minutes. We turned up the heat and finally got the sauce to reduce after about 20 minutes. Luckily, chicken thighs are hearty and nearly impossible to overcook. 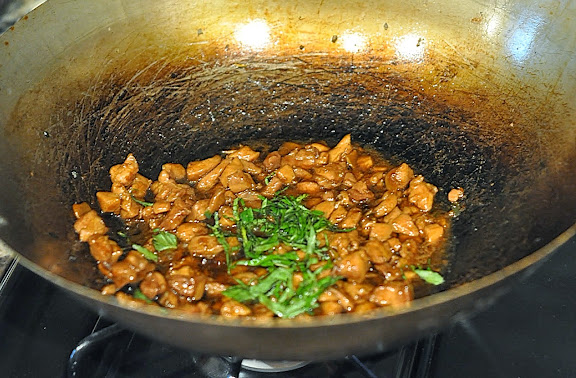 Off the heat, stir in the basil leaves so they wilt slightly. 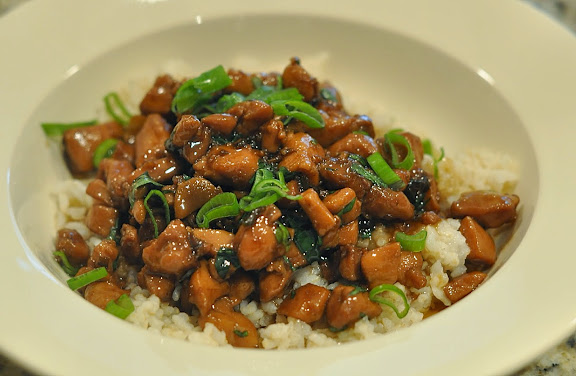 Serve the chicken over cooked rice and garnish with green onion (or Fresno chiles). Sauce frustration aside, this dish is a keeper. Stay tuned for an update after we make it again and figure out how to reduce and thicken the sauce without cooking it for half an hour.