With ingredients including coconut milk, curry paste, lemongrass and kaffir (dried lime leaves), this recipe sounds a lot more intimidating than it actually is. Not only is it easy to make, but it tastes so good that you’ll want to stock your pantry with these items to keep this soup in your regular meal rotation. When we cook new dishes, we often make notes on changes we made to the original recipe or comment on how the dish turned out. The first time we made this soup, my notes on the printed recipe included the statement “holy sh*t GOOD” because we loved it that much! We adapted the original recipe a bit and followed some of the suggestions from this version, and now we have a crave-worthy soup recipe that we look forward to making at least once a month. Whenever I see a can of coconut milk (surprisingly, readily available at the grocery store), I think of this soup in the best, most mouth-watering way. 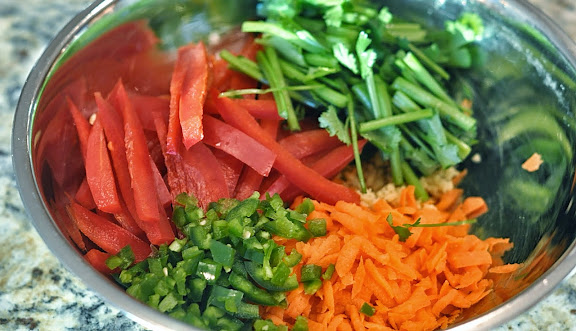 Start by prepping the vegetables: cut the stems from the cilantro leaves and roughly chop the stems; shred a carrot using the large hole side of a box grater; slice a red bell pepper into thin strips; chop a serrano or jalapeno pepper into tiny pieces (remove the seeds and white rib parts to make it less spicy); and mince a bit of fresh ginger. 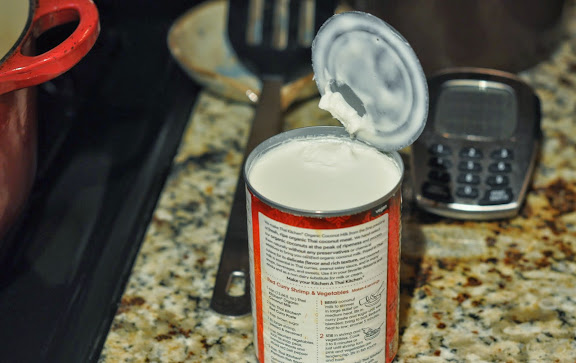 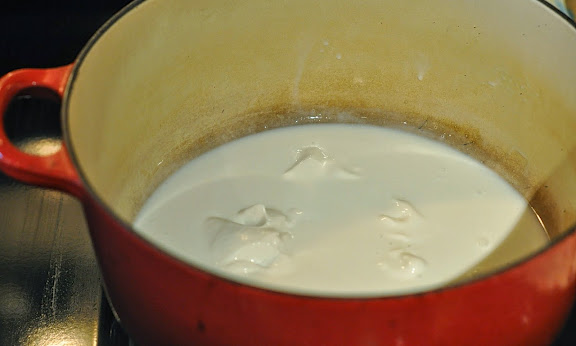 Heat a Dutch oven or other heavy-bottomed pot over medium-high heat, then scoop out the coconut cream (until you reach the liquid portion) and heat it until it melts. Add the Thai red curry paste to the coconut cream and stir until it begins to sizzle. (We found the curry paste at our local Whole Foods, or you can get it online.) 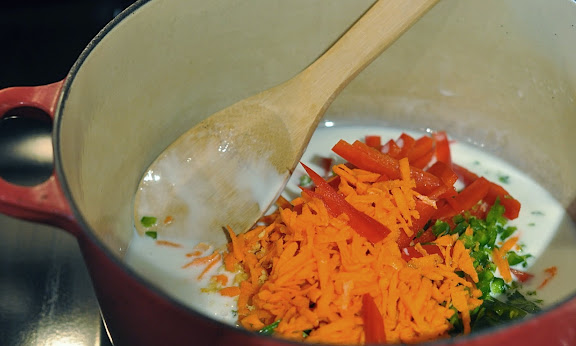 Add the cilantro stems, carrot, red pepper, serrano and ginger to the pot and cook until the veggies begin to soften — about 5-7 minutes. 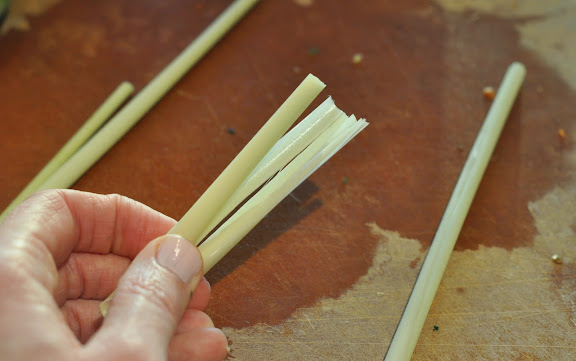 Lemongrass is not something we cook with very often, but it’s easy to use in this recipe. Cut the ends off the stalk and peel away the tough outer layers. Then cut the stalk in half. That’s it. Add the lemongrass to the Dutch oven, along with the coconut milk (the liquid from the first can and the can of “lite” milk), chicken broth, fish sauce, agave nectar (optional, to add just a touch of sweetness), lime juice and zest, and the lime leaves. Because we only recently found dried lime leaves (at Whole Foods), we haven’t made this soup with them yet. So don’t stress if you can’t find them — this soup is still plenty good without them! Simmer the soup for about 20 minutes. 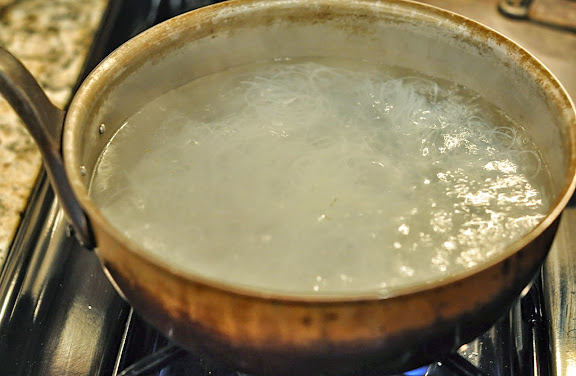 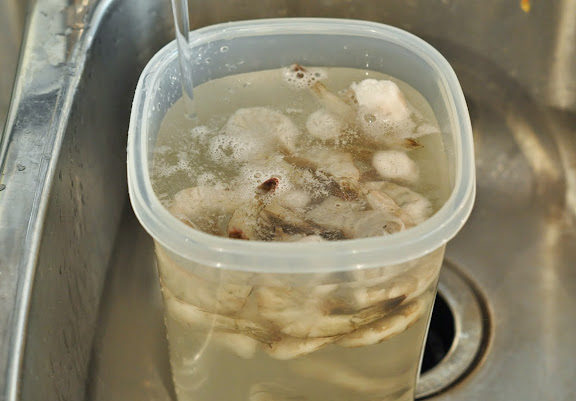 The original recipe uses thinly sliced chicken breasts, sauteed in the coconut cream. We used chicken the first time we made this soup, but didn’t think it had much flavor or added much of anything to the dish. We used shrimp the next time and thought the soup turned out even better. We used frozen “EZ peel” raw shrimp, thawed and peeled before adding it to the soup. You could also just keep it vegetarian, without chicken or shrimp.

Update:  We made this soup with sea bass once, using the marinade from this recipe, and now we always make it with sea bass! Marinate the sea bass for about 30 minutes, then heat a couple tablespoons of vegetable oil in a skillet and sear the sea bass for a few minutes per side (starting skin-side up) until browned on both sides. Add the sea bass to the soup to finish cooking in the broth — about 15-20 minutes, depending on the size of the fish. 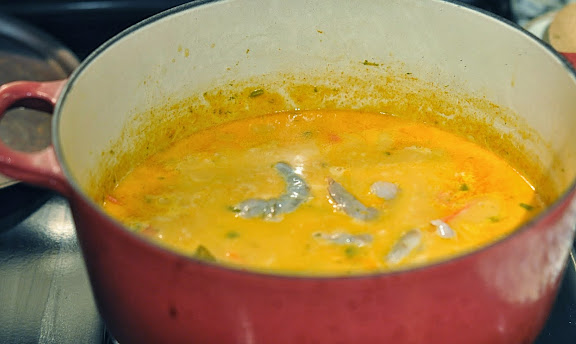 The shrimp cooks quickly, so add it at the end and cook until the shrimp turns pink — about 3-5 minutes, depending on the size of the shrimp. 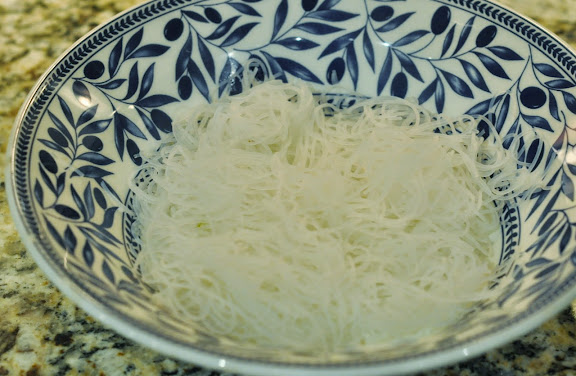 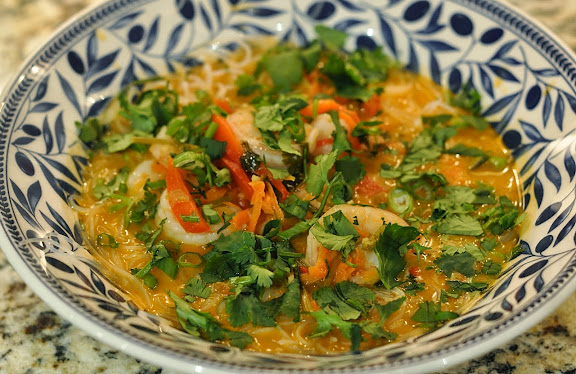 Remove (and discard) the lemongrass and lime leaves, ladle the soup over the noodles, then add chopped cilantro leaves, thinly sliced green onions and a squeeze of lime juice to brighten the soup and bring all the flavors together. And by “all the flavors,” we’re talking about almost every possible good flavor — this soup is sweet, sour, savory, salty and spicy — all in one bowl. You can thank us later for your new soup addiction (and subsequent Pavlovian response to the sight of a can of coconut milk).