Pot roast isn’t exactly the first thing that comes to mind when we think Italian food.  (Come to think of it, neither is “slow-cooker.”)  Instead, and perhaps stereotypically, our go-to Italian dishes usually involve some sort of pasta:  lasagne, bolognese, meatballs and vodka sauce, to name just a few of our Italy-inspired comfort food favorites.  Not surprisingly, creating richly complex dishes like those requires a fair amount of effort and time in the kitchen.  We certainly don’t mind spending time in our kitchen, especially when the end result is so worthwhile, and we particularly enjoy how the cooking part of the meal becomes an event on its own when we make these dishes on the weekends.   (It’s no coincidence that two of the recipes include the word “Sunday” in their names.)   But we also appreciate easy weeknight meals that have all of the flavorful, comfort-food goodness, yet less of the work.  So we were intrigued to try this recipe from the book “Slow Cooker Revolution” for pot roast that cooks (without any help from us) all day in the slow-cooker, with Italian flavors from red wine, oregano, tomato, red pepper flakes and dried porcini mushrooms.  The recipe’s “Italian spin” goes right along with our philosophy that everything is better in Italy (or inspired by it.)  If an Italian grandmother had a handed-down-through-generations recipe for pot roast that she lovingly spent hours in the kitchen preparing to serve as the secondi (main) course at a long and festive Sunday lunch gathering of multiple generations of family, we imagine it would taste a little something like this. 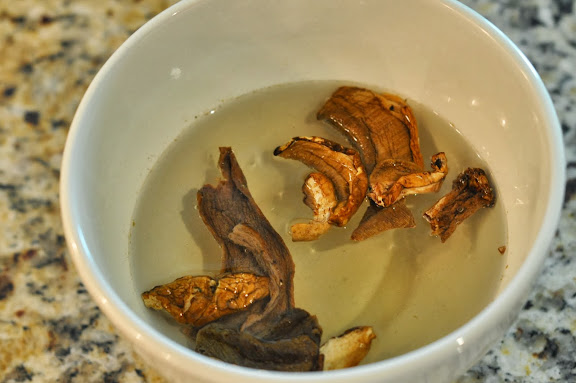 As easy as it is, this recipe does require a bit of prep work up front, before you put all the ingredients in the slow-cooker, set it and forget it until the roast is done.  Start by soaking about 1/4 ounce of dried porcini mushrooms (6-8 shrooms, depending on size) in a little warm water for around 15 minutes.  Once the mushrooms are reconstituted, chop them into small pieces. 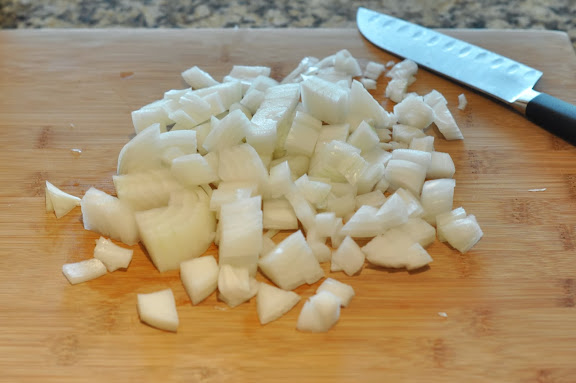 Chop an onion into medium pieces. 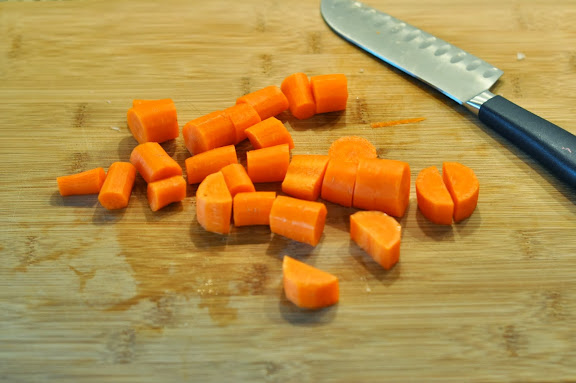 Do the same with 2 carrots. 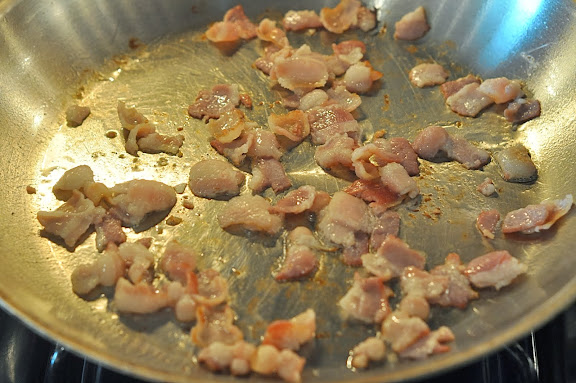 Chop up 4 pieces of bacon and cook it in a large skillet over medium heat until it gets crispy — about 5-7 minutes.  Transfer the crispy bacon to the slow cooker. 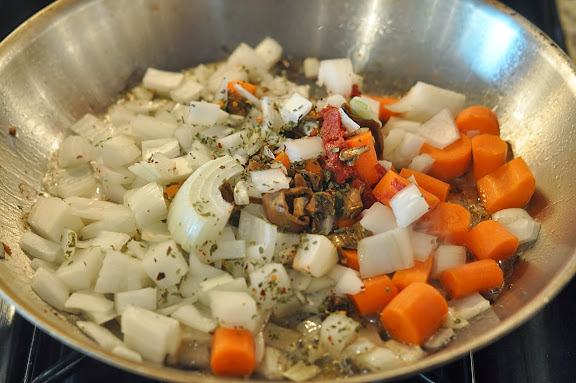 Spoon off all but about a tablespoon of the fat rendered from the bacon, then add the mushrooms, onion, carrots, 3 minced garlic cloves, 1 teaspoon dried oregano (or 1 tablespoon fresh), 1 tablespoon tomato paste and 1/4 teaspoon red pepper flakes to the fat in the skillet.  Cook over medium-high heat until the veggies soften and brown slightly — about 8-10 minutes. 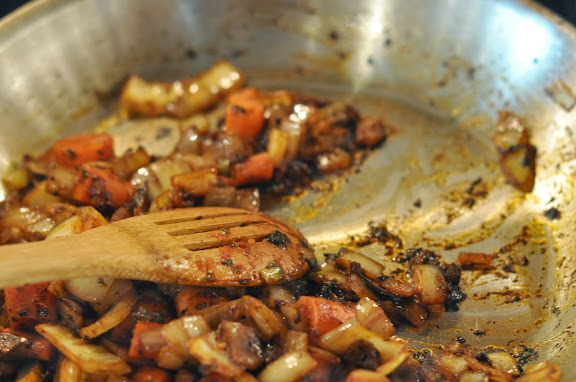 Slowly add about 1/4 cup dry red wine to the skillet and scrape up any browned bits from the bottom, then transfer the veggies to the slow-cooker. 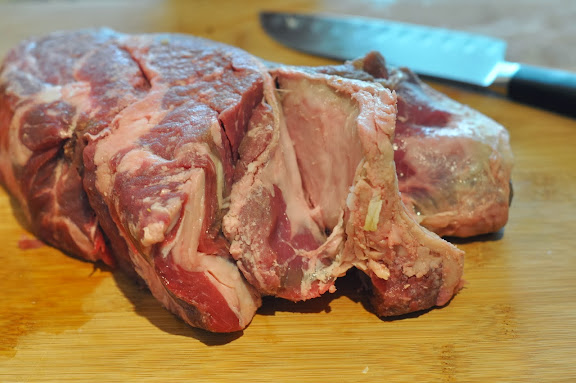 Now comes the tricky (for me) part.  The recipe calls for a 2-3 pound boneless beef chuck roast, “tied.”  Another section of the cookbook explains that when cooking pot roast, you should “open up the roast and trim away any excess fat.  Then tie each roast back together securely with butcher’s twine.”  Hmmm.  Sounds easy enough, even for a novice cook (who isn’t good at — or fond of — trimming fat off meat) like myself.  Maybe the roast we were using was particularly fatty, or perhaps they’re all that way and I overdid the trimming, but by the time I was done, the roast was in 3 separate pieces.  With plenty of fat still remaining. 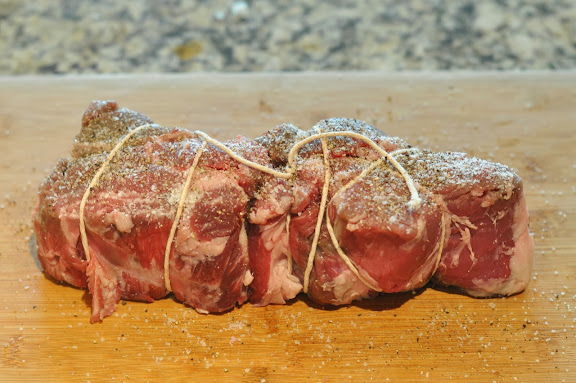 Fearing we wouldn’t have any actual meat left if I kept trimming the fat, I grabbed the twine and did my best to turn 3 hacked up pieces of beef back into a pretty roast.  (I said I did my best, not that I actually accomplished any such thing.  And then it all fell apart during the transfer to the slow-cooker anyway.  Sometimes I feel a lot like Charlie Brown when I’m cooking.)  Season the roast with salt and pepper. 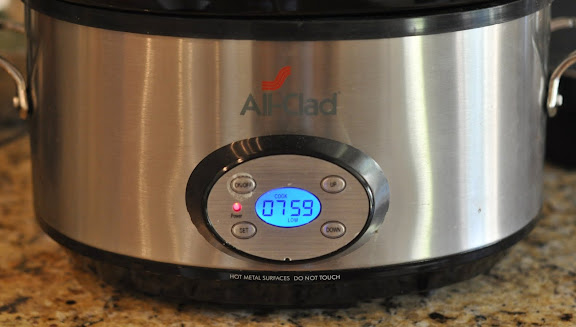 Because it is nearly impossible to get a good photo of ingredients in a slow-cooker, use your imagination and picture me adding a 14.5 ounce can of crushed tomatoes, 1/2 cup of chicken broth and a bay leaf to the cooker.  Stir everything together, then add the roast.  (Then curse when it falls apart.)  Cover the slow-cooker and cook on low for 9-11 hours (or 5-7 hours on high), until the beef is tender.  When the roast is done, transfer it to a cutting board, loosely tent it with foil and allow it to rest for about 20 minutes. 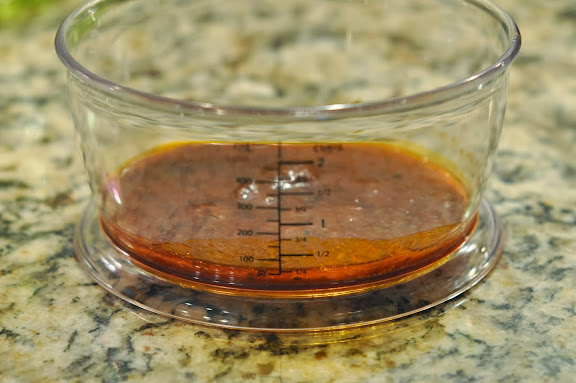 Let the liquid in the slow-cooker settle for about 5 minutes, then spoon off any fat from the surface and discard. 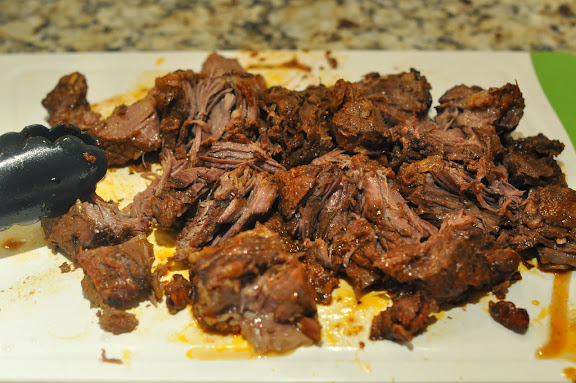 After removing the twine, the recipe says to “slice [the roast] into 1/2 inch-thick slices,” but ours was so melt-in-your-mouth tender that it pretty much broke apart at the touch of the tongs — no slicing necessary.  (Which begs the question of why I needed to tie it all together in the first place?!?  Aaugh!!!!) 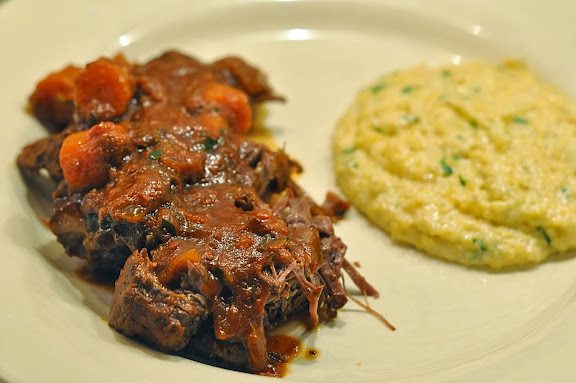 Spoon the sauce over the meat and serve.  We served ours with a creamy parmesan polenta.  Not the prettiest of plates, but it tastes deliciously rich and decidedly Italian, with sweetness from the tomatoes, earthiness from the oregano and mushrooms and a hint of spice from the red pepper flakes.  Just like Nonna used to make.