Sometimes a new recipe from a tried-and-true cookbook is a bit like the promise of a new day after a particularly trying one.  Feeling confident that a dish is going to turn out delicious, even if you’ve never previously cooked it, can be as comforting as knowing that frustrations or disappointments of a previous day won’t seem nearly so grim after a good night’s sleep.  We have that kind of confidence in Ina Garten’s recipes and cookbooks.  The Barefoot Contessa knows her way around the kitchen, and she is often our go-to source when we want to try out a new recipe.  This panzanella recipe is just one of many we have tried from her book, “How Easy is That?” and we have to say, not only is it pretty darn easy, but it’s addictingly good with fresh ingredients (rustic bread, cucumber, red bell pepper, cherry tomatoes, red onion) and Greek flavors (olive oil, red wine vinegar, garlic, dried oregano, Dijon mustard, feta cheese and kalamata olives.)  And just like that, we have a new favorite salad to add to our rotation. 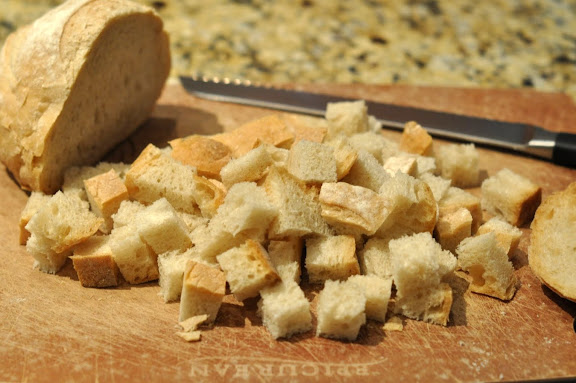 We’ve made the Italian (and more traditional) version of panzanella before and loved it, so we were intrigued by Ina’s Greek version, made even easier because it doesn’t involve the extra step of grilling eggplant.  Start by cutting about 4 slices of good rustic bread into 1 inch pieces. 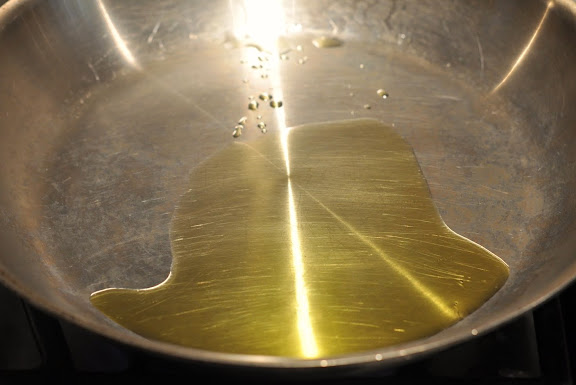 Heat a couple tablespoons of olive oil in a large skillet until hot. 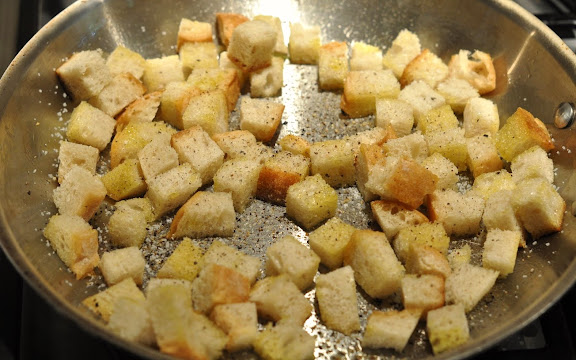 Add the bread to the oil, season with salt and pepper and cook over medium heat until the bread is toasted and golden brown — about 5-10 minutes.  Stir or toss the bread often so that it will brown on all sides.  Set the bread aside off the heat. 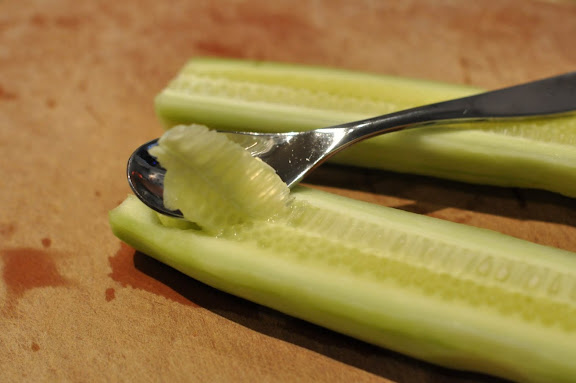 Ina’ s recipe calls for 1 “hothouse” (a.k.a. English) cucumber.  These are the longer, thinner cucumbers that come wrapped in plastic.  We can usually find them in our local grocery store, but if you can’t find one then a regular cucumber will work just fine.  Peel the cucumber, cut it in half and use a spoon to remove the seeds. 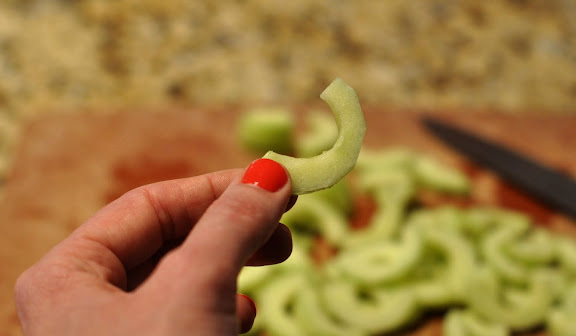 Then cut the cucumber into half-moon slices.  I thought our slices were a little big, so I roughly chopped them into smaller pieces.  Don’t worry about being too precise — it’s a salad, so it’s all going to get tossed together anyway.  I just didn’t want there to be bites where all you got was a mouthful of cucumber. 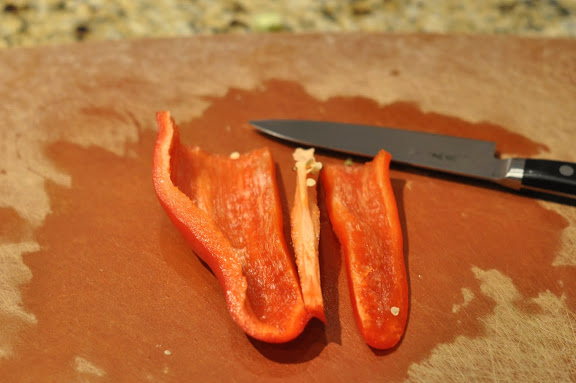 Prepare the bell pepper by cutting off the top, removing the cluster of seeds, then cutting out any white rib parts (which can have a bitter taste.) 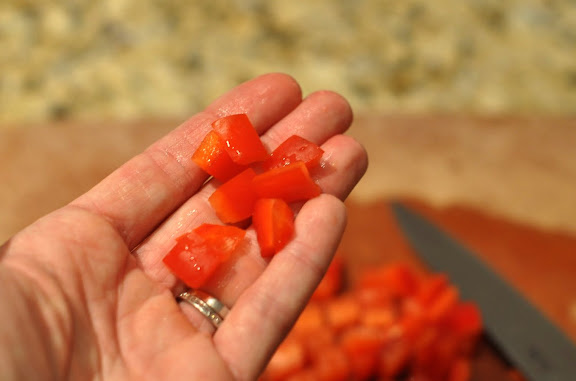 Then chop the pepper into small pieces.  The original recipe uses both red and yellow bell pepper, but all we had at the time was red.  Just yellow would be fine too, or go ahead and use both if you like your salads pepper-y. 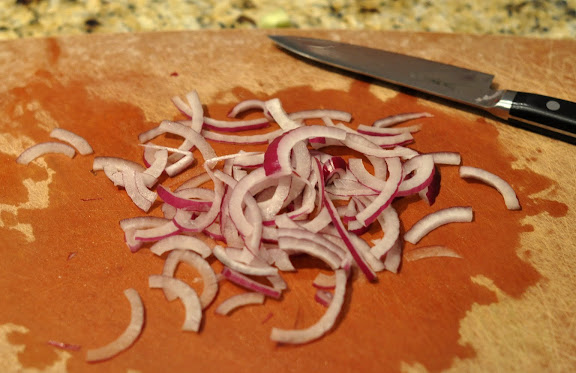 Ina’s recipe calls for half of a small red onion.  Since her recipe serves 6, we cut the salad ingredients in half and only used a quarter of an onion (check me out doing math!)  Cut the onion into thin half-moon slices. 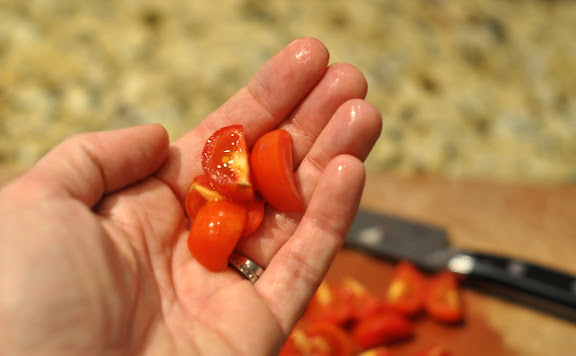 Cut about half a pint of cherry tomatoes into halves. 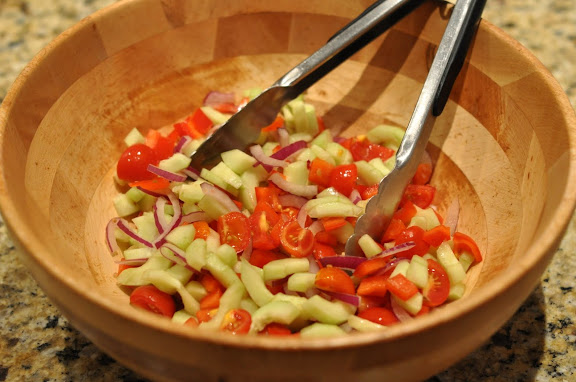 Toss the veggies together in a large bowl. 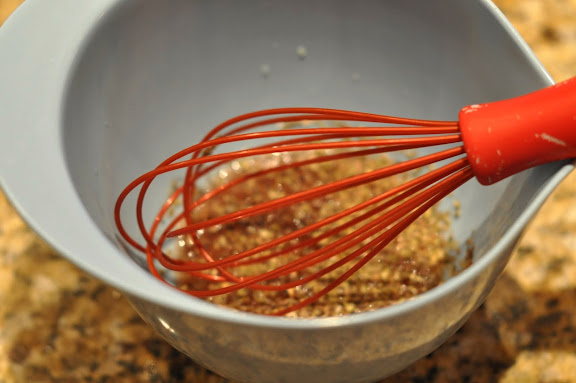 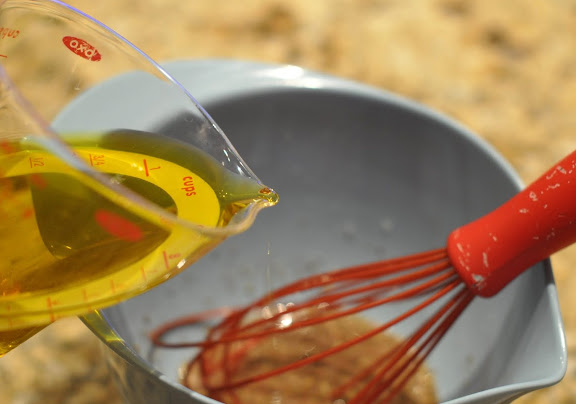 Then slowly add 1/2 cup of olive oil to the dressing while whisking constantly.  This is the full recipe instead of half (because I hate doing math), so there will likely be more vinaigrette than you need if you’re using less salad ingredients.  You can always save it for another salad — it should last several days in the fridge. 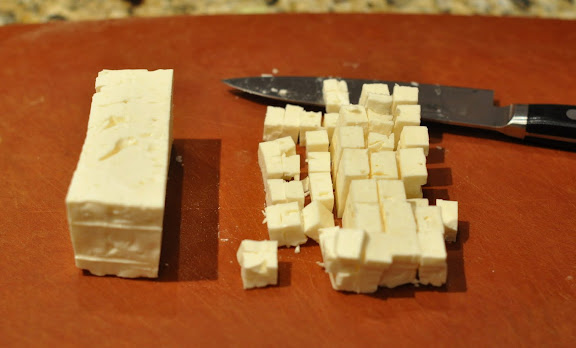 Cut the feta (about 4 ounces worth) into 1/2 inch cubes.  Using this type of feta rather than the pre-crumbled version gives more feta flavor (and Greek flair) to the finished salad. 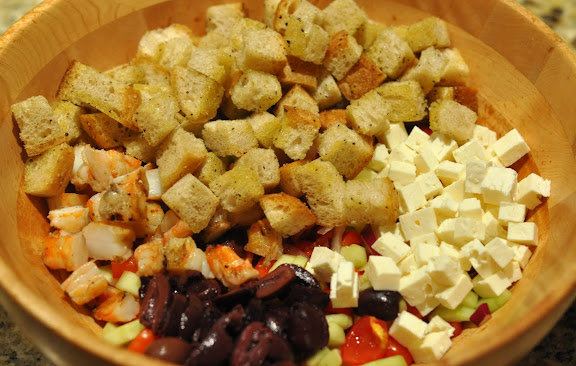 Add the feta, bread and sliced kalamata olives to the veggies.  You may want to drizzle a little of the vinaigrette over the bread before dressing the rest of the salad and tossing it all together — the toasted bread soaks up the flavorful dressing really well.  We happened to have some leftover grilled shrimp on hand, so we added it to the salad as well for a little protein and plump texture. 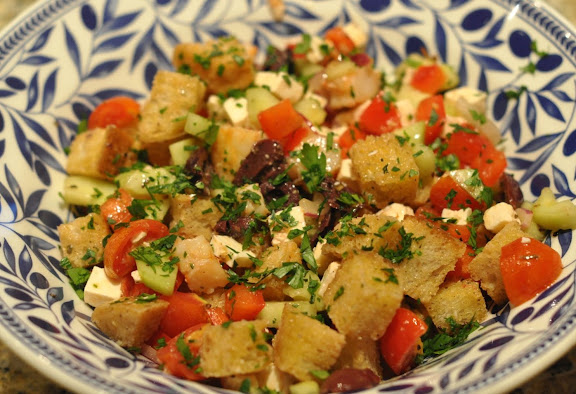 Toss the ingredients together with the vinaigrette, garnish with chopped parsley and serve, without any doubt as to how much you’re going to love this salad.  So much so, in fact, that you might even sneak a bite or two of leftovers (if there are any!) while doing the dishes, even though you are completely full from dinner.