When we saw the Steelers’ schedule and found out that they played the Cincinnati Bengals, we knew we would be making Cincinnati Chili for the Steeler Opponent-City Challenge.  Cincinnati is famous for its chili — so much so that during the pre-game hoopla, they played a clip of this peculiar chili being spooned over spaghetti and hot dogs, we suspect from one of the most famous Cincinnati chili restaurants, Skyline Chili.  Cincinnati chili is different than any other chili we’ve ever had, from the flavor (a mix of sweet, warm cinnamon, and spicy) to the way it is served, over spaghetti.  We affectionately refer to this chili as “peculiar” without intending any offense — we liked the chili a lot, but initially had our doubts when we saw that the recipe we adapted called for boiling the ground beef and combining a pretty unusual mix of ingredients (e.g., cocoa powder and Worcestershire??)  We had similar initial concerns about the football game (and Mike Wallace’s seeming inability to catch a pass), but both the chili and the Steelers ultimately turned out to be winners, bringing the current S.O.C.C. record to:  Steelers 3-3, Foodie Lawyer 5-1. 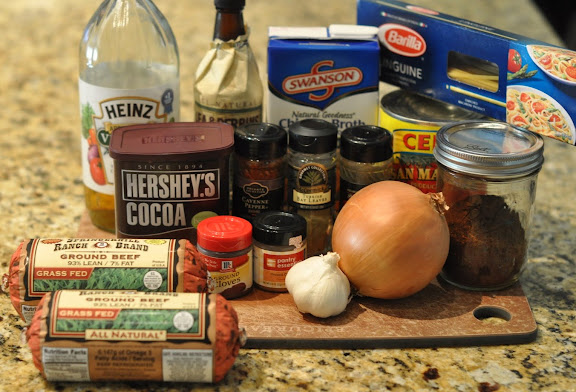 Cincinnati chili is made with an interesting mix of spices (to say the least) and ingredients:  ground beef, chicken broth, canned tomatoes, onion, garlic, Worcestershire sauce, unsweetened cocoa, chili powder, cayenne, cumin, cider vinegar, bay leaf, ground cloves, cinnamon and salt.  Legend has it that the original recipe was created by brothers Tom and John Kiradjieff who immigrated to Cincinnati from Macedonia and opened a food stand selling hot dogs and Greek stew.  Perhaps due to the locals’ unfamiliarity with Greek cuisine at the time, the brothers’ business was not going well.  Undaunted, the brothers changed the stew recipe to make it a chili, served it over spaghetti and created a city-wide phenomenon, making Cincinnati the chili capital of the U.S. The recipe we adapted called for cooking the ground beef in water.  We had a difficult enough time wrapping our minds around the concept of boiling the meat in the first place, so we decided to cook it in chicken broth instead.  Place the beef in the broth and stir to break it up into tiny pieces while bringing it to a boil and simmering for about 30 minutes. 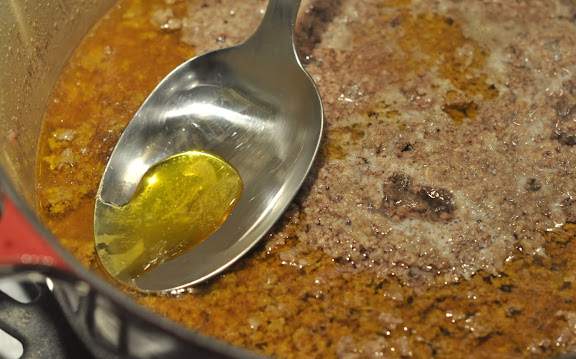 Skim off (and discard) the fat from the beef. 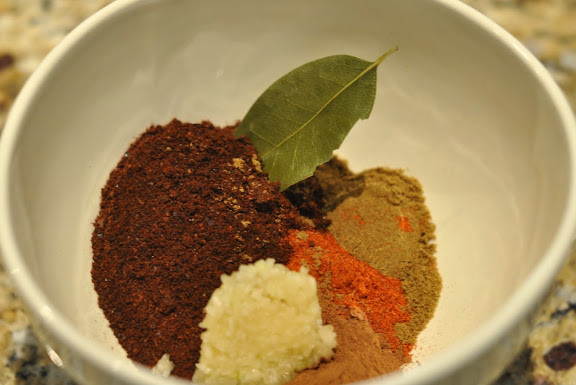 Assemble the garlic and spices and add them to the pot.  (Reserve 1 tablespoon of chili powder to add later.) 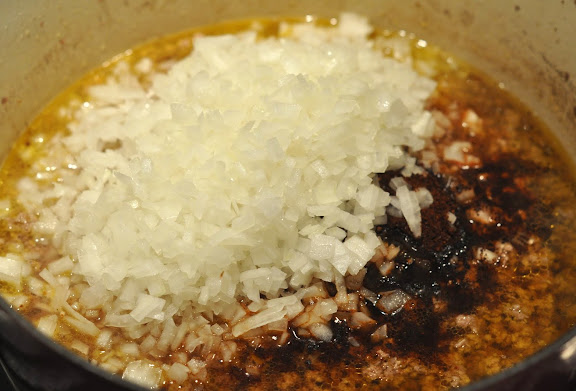 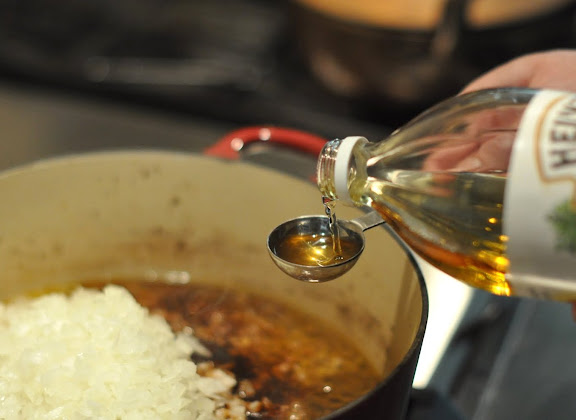 Then add the liquid ingredients:  cider vinegar, Worcestershire, and water. 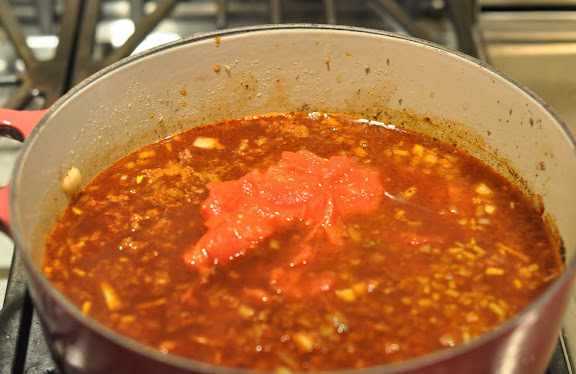 Finally, add the chopped tomatoes (and their juices.)  Keep the empty tomato can handy and use it to add more water if necessary while the chili cooks (this will pick up the residual tomato juices from the can.)  Simmer the chili over low heat, uncovered, for at least 3 hours or up to all day.  The longer this chili cooks, the better.  When the chili first started simmering, we weren’t sure how it was going to turn out, since it smelled rather strange with a lot of uniquely bold aromas competing with each other.  But as we simmered it for about 6 hours (adding water periodically if it cooked down too much) and tasted throughout the day, the flavors became a lot more cohesive.  (Similar to the way the Steelers came together in the fourth quarter to take the lead and ultimately beat the Bengals.)  About half an hour before you’re going to serve the chili, add the reserved tablespoon of chili powder.  Just prior to serving the chili, remove (and discard) the bay leaf. 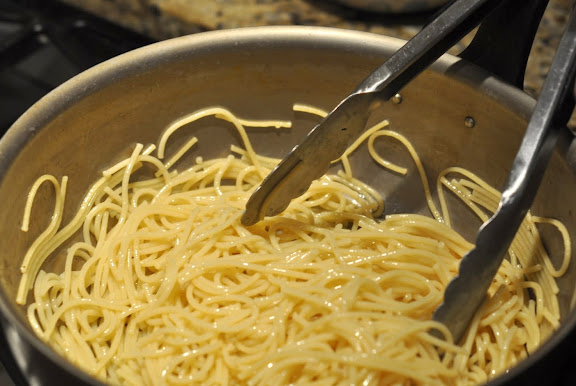 Although we prefer Texas chili served over Fritos, the texture of Cincinnati chili (more like a sauce than a stew) makes it an excellent topping for spaghetti.  We used whole wheat pasta, boiled it until al dente, then drained it and tossed it with a little olive oil. 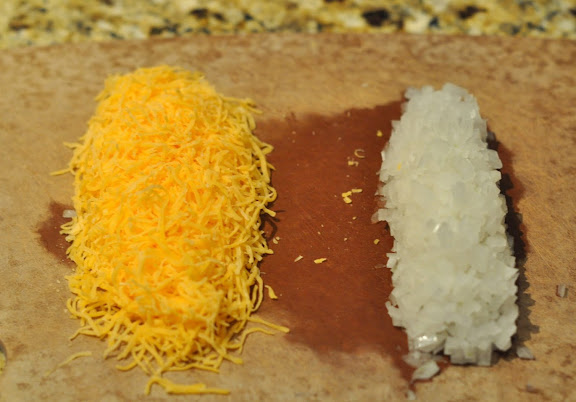 The uniqueness of Cincinnati chili extends to the ways it is ordered and garnished: ” three-way” (spaghetti, chili and cheddar cheese); “four-way” (three-way plus chopped onion); or “five-way” (four-way plus kidney beans.) 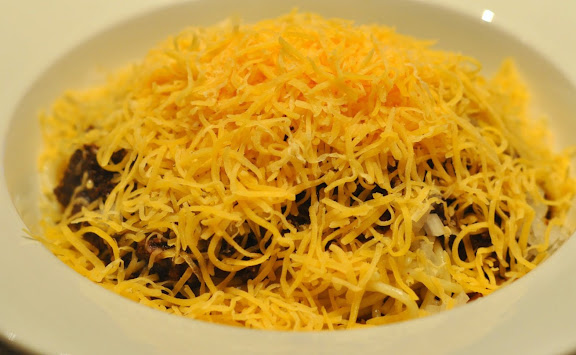 We went with the four-way, plus a “cheese coney” hot dog for Dan (strictly for research purposes, not because he loves hot dogs so much.)  The four-way chili was good, the cheese coney was even better and the Steelers beating the Bengals was the best.

Ingredients:
For the chili–