We’ve previously made a couple of different kinds of paella (a version with chicken, sausage and seafood, as well as one made with leftover turkey), using the stove-top method of cooking.  After a lovely dinner party at a friend’s house several weeks ago (thanks Sally!), we were inspired to try an all-seafood paella cooked on the grill instead of the stove.  One of the reasons for cooking this dish on the grill is that the heat will be more evenly distributed across the entire pan and its contents.  Generally, paella pans are wider than the size of the typical stove burner, so the ingredients in the center will cook a little faster than the outer edges.  No big deal, since the proteins cook in the center and the outer edges are mostly rice, but authentic paella should ideally have a crispy layer of caramelized rice along the bottom and sides called “socarrat.”   (We have yet to perfect the socarrat, but cooking the paella on the grill gives us a better shot at doing so.  And the paella is still delicious even without that crispy layer.)  Grilling the paella or using a paella pan is by no means required — in our humble opinion, the only true requirements for paella are rice and saffron — so feel free to make do with whatever other ingredients you prefer and means you have available.  This version is simply our take on the recipe from this article, using the seafood we like and a few techniques borrowed from other recipes.  No matter the protein (although beef might be a bit strange) or cooking method used, it doesn’t get much better than a big pan of flavorful, saffron-infused rice cooked in a rich broth along with sweet and savory protein, red peppers and other veggies that add a bit of bite. 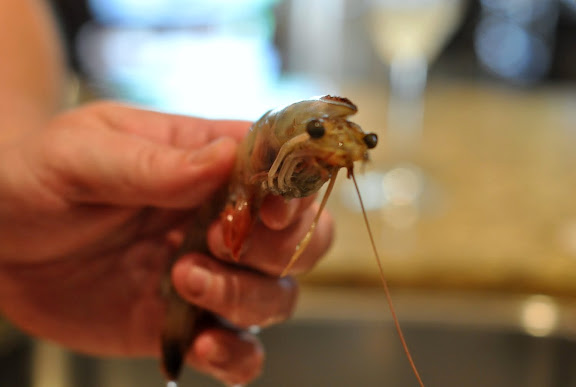 This version of paella is not a weeknight dish, in that it involves quite a few steps and takes some time.  Since we were cooking it on a weekend, we decided to go all the way with it and make homemade seafood stock.  We bought fresh shrimp, with heads and tails on, so we could use the shells for the stock.  I’ll spare you the photos of the peeling and de-veining, but couldn’t resist a headshot of one of the star ingredients. 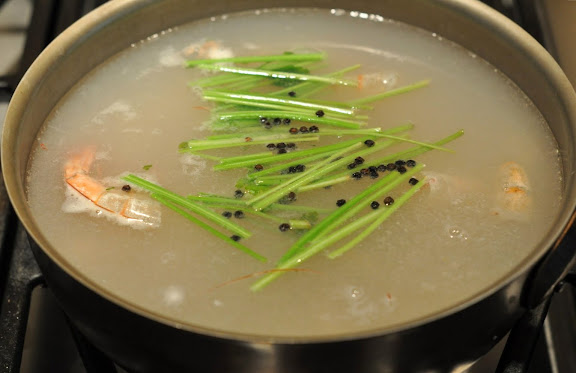 We made our stock with shells (including heads) of about 1 pound of shrimp, 3 cups of clam juice, 5 cups of water, a handful of parsley stems, 1 garlic clove and a generous pinch of peppercorns.  Bring it all to a boil and simmer for 30 minutes. 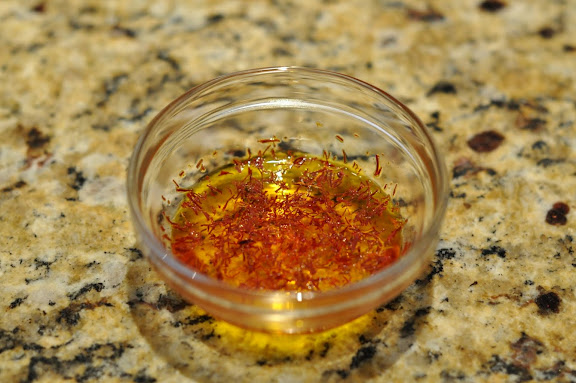 While the stock simmers, prepare the other ingredients.  Crumble about 1/2 a teaspoon of saffron threads into 1/4 cup dry white wine. 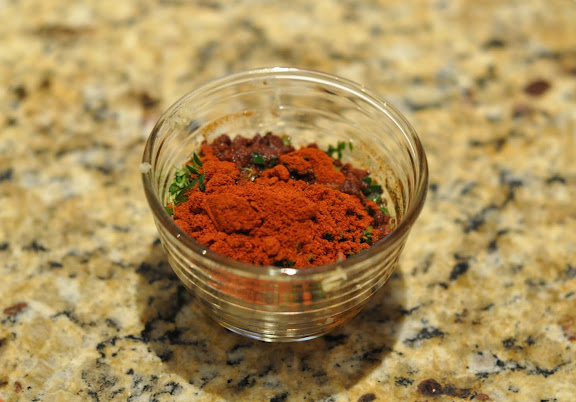 Create a paste with the spices:  mash together 2 tablespoons minced fresh parsley, 6 cloves minced garlic, 1 tablespoon minced fresh thyme and 1/8 teaspoon salt; then stir in 2 teaspoons paprika (Spanish smoked paprika if you can find it) and a few drops of olive oil as needed to make a paste-y consistency. 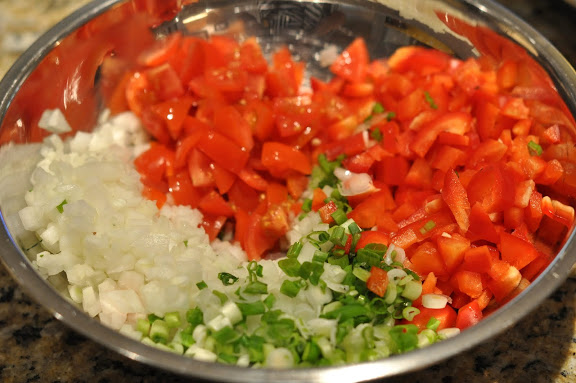 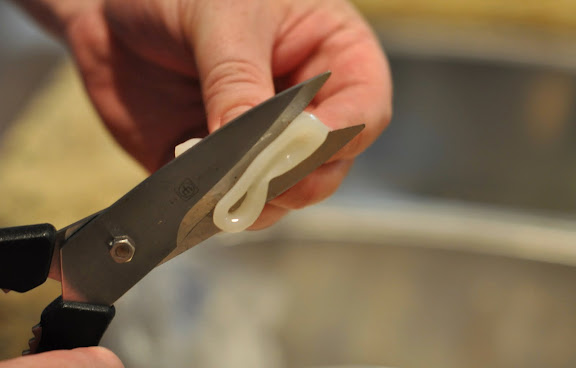 Prepare the seafood.  In addition to shrimp, we used calamari, clams (because they didn’t have any mussels) and lobster tails.  You don’t need to do anything to the clams, other than keep them refrigerated in an open container (so they get some air — they are still alive, and need to stay that way) until you’re ready to cook them.  Cut the tubular calamari into 1/4-inch rings using sharp kitchen shears or a sharp knife. 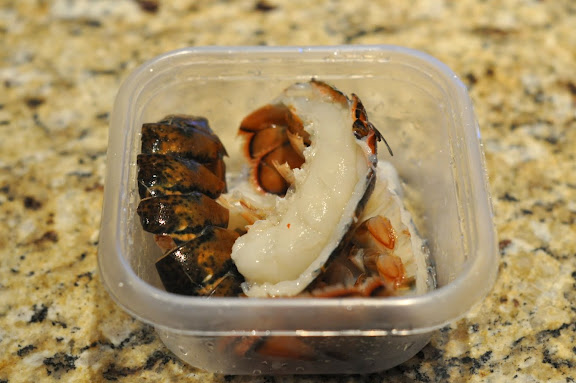 Cut the lobster tails in half lengthwise and leave them in their shells. 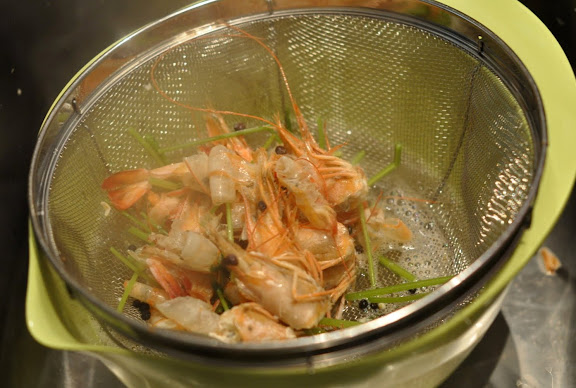 When the stock is done, drain all the liquid away from the solid ingredients (discard the solids.) 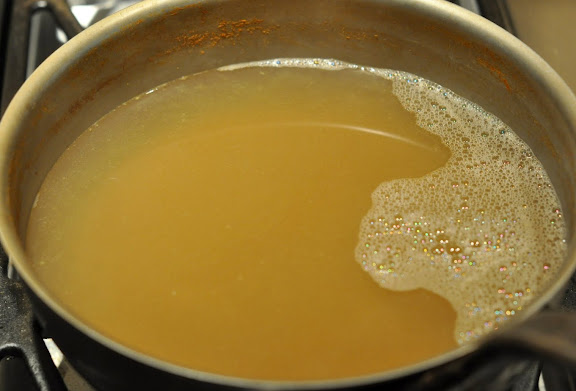 Keep the stock hot in a pot on the stove (or the side burner of your grill if you have one.) 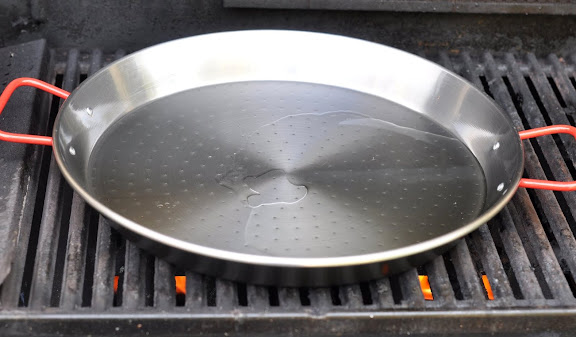 Heat about 3 tablespoons of olive oil in the paella pan over medium-high heat. 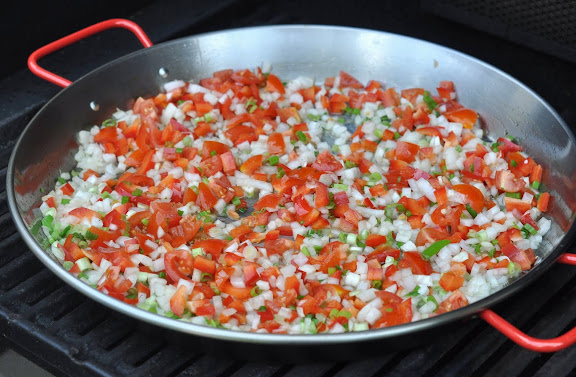 Add the veggies and cook until softened — about 6-8 minutes. 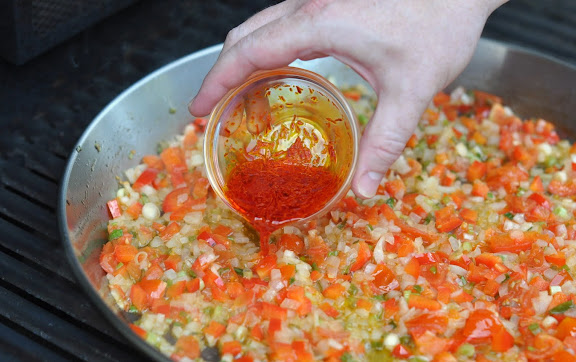 Add the saffron-infused wine and cook for about a minute. 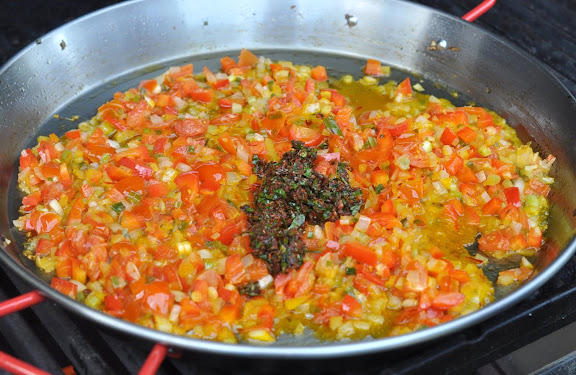 Stir in the parsley/spice paste and cook for another minute. 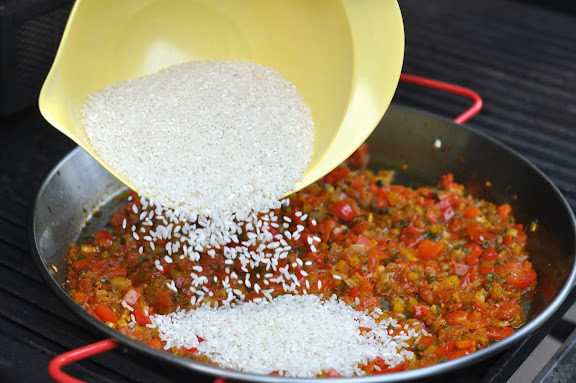 Add 2 to 2 1/2 cups of rice, stir it in with the veggies and cook for about a minute.  Most paella recipes call for short-grained rice, such as Calasparra or Bomba, because the short grain absorbs the liquid (and flavors) better than long-grain rice.  If you can’t find any of the Spanish short-grain rices, Arborio rice (typically used to make risotto) works really well. 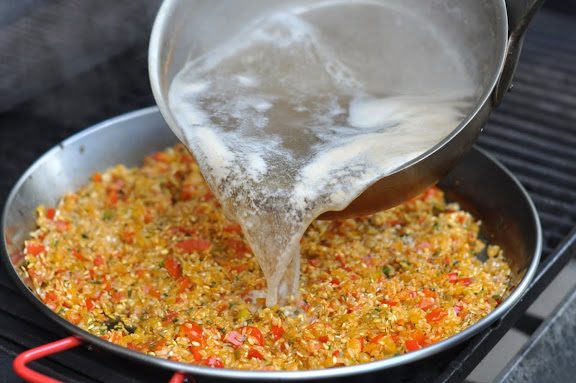 Add the hot stock and cook for about 5-6 minutes. 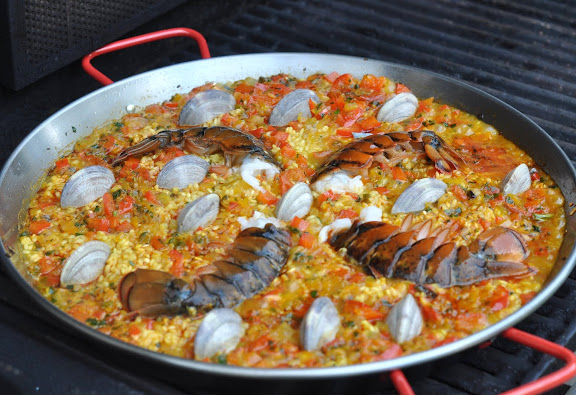 Now you’re ready to start adding the seafood, in stages, depending on how long each particular type of seafood needs to cook.  Start with those that need to cook the longest — the clams and lobsters.  Nestle them down into the rice mixture and cook over medium heat for about 10 minutes. 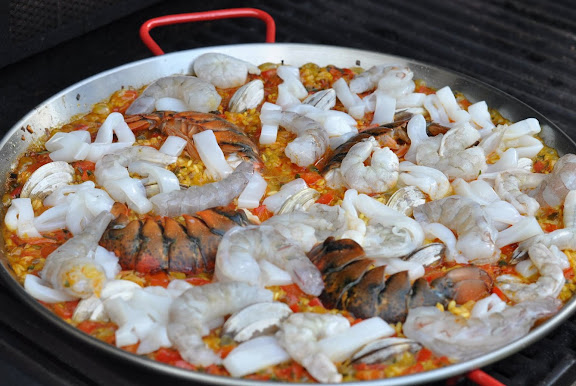 Then add the calamari and shrimp, nestling them down into the rice mixture as well, and cook for another 10 minutes. 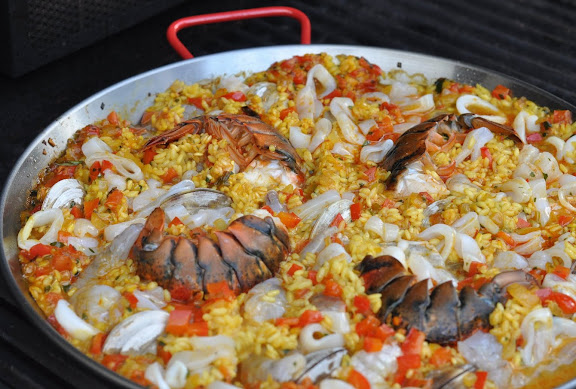 After about 35 minutes total, most of the liquid has been absorbed, the shrimp and calamari are beginning to become opaque, the clams are just starting to open, the lobster tails are starting to curl and all the ingredients are becoming One with the golden saffron rice.  Turn the heat up to high for 1-2 more minutes to attempt to create the socarrat. 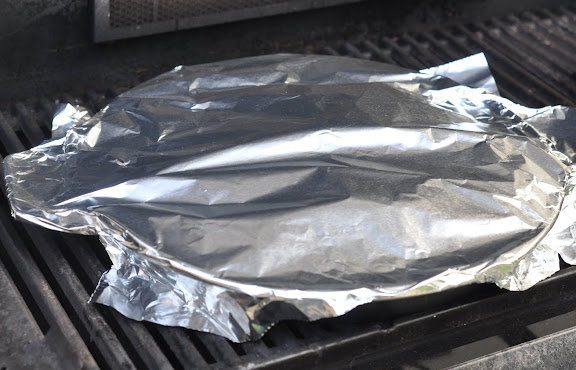 Turn off the heat, cover the pan with foil and let the paella rest for 5-10 minutes. 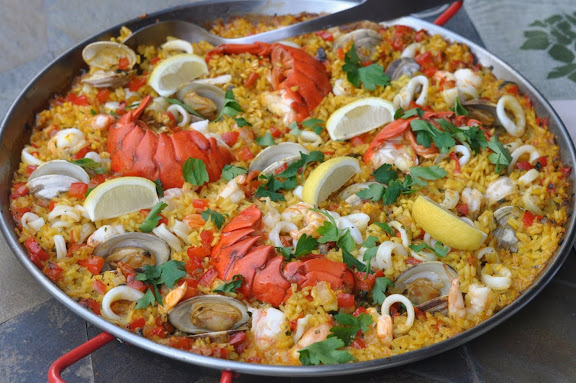 Garnish with parsley leaves and lemon wedges and serve, family-style.  And maybe invite some family or friends over, because that’s A LOT of paella.