Paella is a rice-based dish that originated from Valencia, Spain.  Although we’ve never had the pleasure of eating truly authentic paella while actually in Spain, Dan’s favorite restaurant in Pittsburgh serves the best version 0f paella he’s ever tasted.  We’ve attempted this dish at home a couple of times, without much success until we found this recipe by celebrity chef Tyler Florence and tweaked it a bit to make it our own.  While not quite as good as the restaurant version, it’s a pretty close second, with rich flavors from the chicken and saffron-infused rice, a little spice from the chorizo and buttery sweetness from the lobster and shrimp.  This is a great recipe to make during the holiday season, whether you are entertaining friends or simply relaxing at home with loved ones.  It’s the kind of dish that invites family-style dining in a celebratory way.  Plus, it’s as delicious as it is festive. 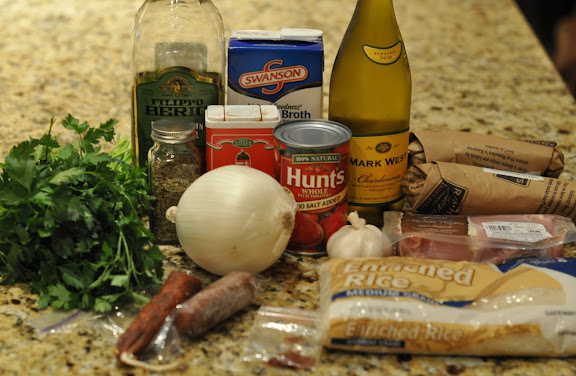 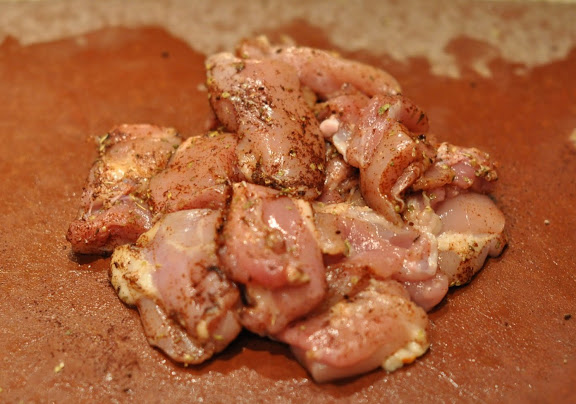 Combine the paprika, oregano and a generous dash each of salt and fresh ground pepper in a small bowl and mix them together.  Trim any visible fat from the chicken, cut each thigh into 2-4 pieces, then toss the chicken with the spice mixture.  Set the chicken aside to rest at room temperature for about 30 minutes. 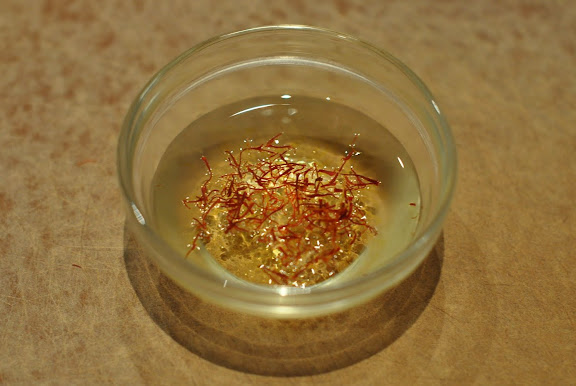 Place a generous pinch of saffron threads in about 2 tablespoons of white wine in a small bowl or ramekin and set aside to infuse while you prepare the other ingredients. 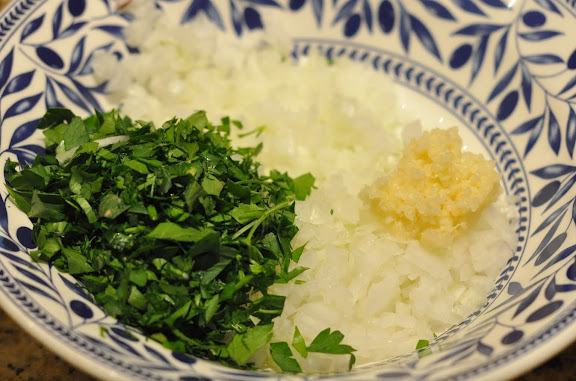 Mince the garlic and chop up the onion and parsley (reserve some chopped parsley to use as garnish when the paella is done.) 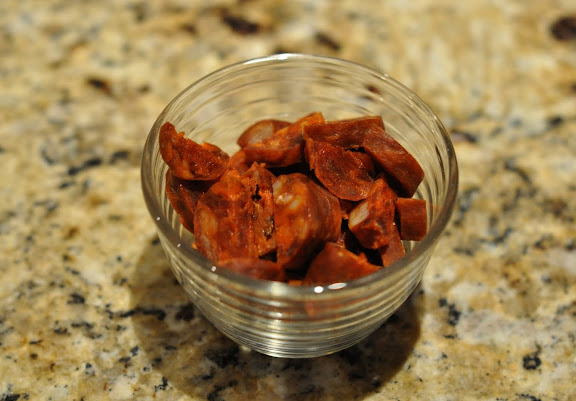 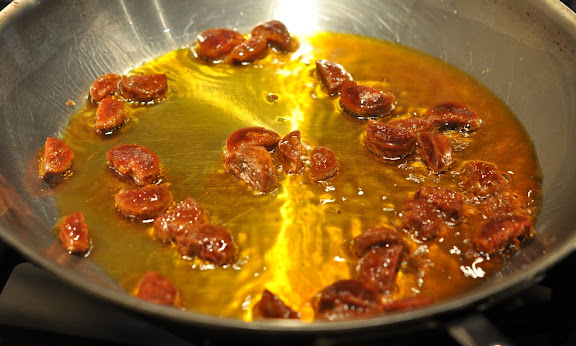 Heat the oil in a paella pan (can’t wait to use our new one, a Christmas gift from my brother Jesson — thank you!) or wide and deep skillet over medium-high heat and saute the chorizo until browned on all sides — about 5-7 minutes.  Remove the chorizo to a plate lined with paper towels to drain. 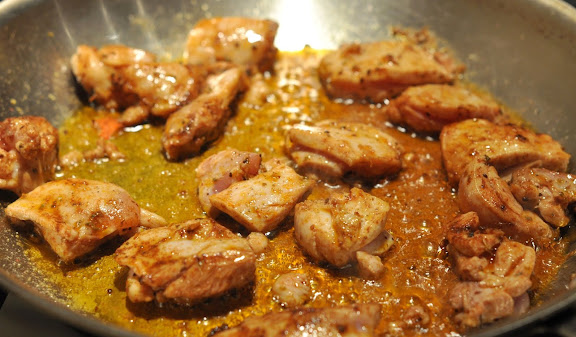 Add the chicken to the same oil used to saute the chorizo and cook over medium-high heat until the chicken is browned on all sides.  Remove the chicken to a plate and set aside.  While the chicken cooks, bring the chicken broth just to a boil in a small pot, then turn off the heat and cover the pot to keep the broth warm. 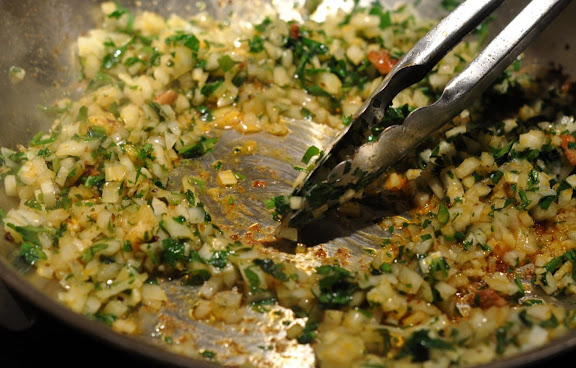 Reduce the heat to medium and saute the onion, parsley and garlic in the same oil until the onions just begin to soften — about 2-3 minutes.  Stir the onion mixture while it cooks and scrape up any brown bits from the bottom of the pan. 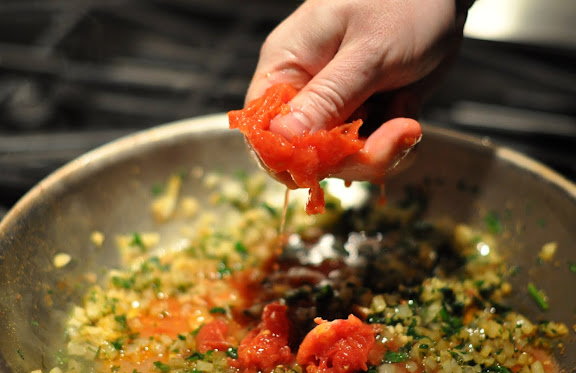 Crush the whole tomatoes by hand and add them (with their juices) to the pan and cook over medium-high heat until the mixture thickens — about 5 minutes. 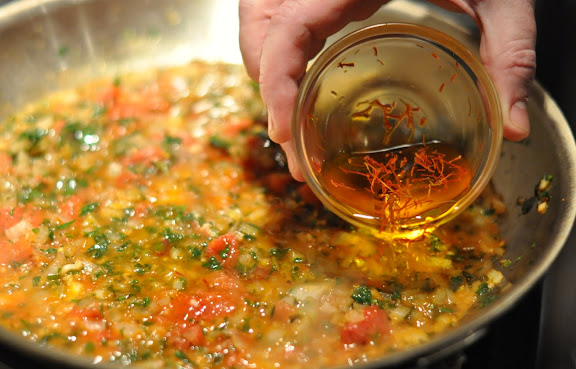 Add the saffron-infused wine, then stir in the rice and cook for about 2 minutes. 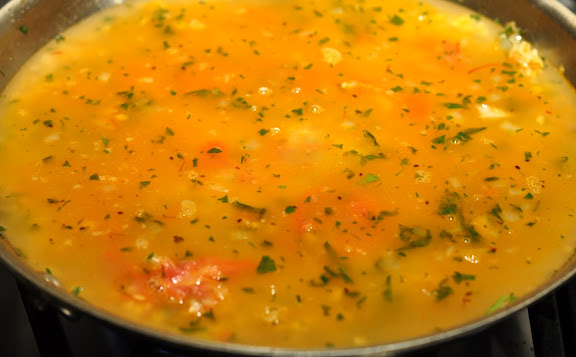 Add the warmed chicken broth and simmer, stirring occasionally, until the liquid reduces slightly — about 10 minutes. 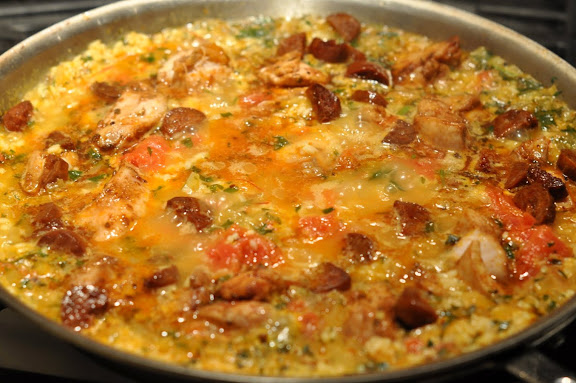 Add the chorizo and chicken and continue to simmer until the liquid reduces further and the rice is al dente — about 15 minutes. 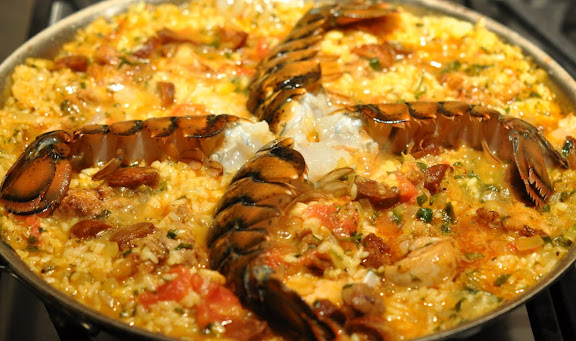 With about 8 minutes of cooking time remaining, nestle the shrimp and lobster tails into the rice.  Depending on the size of the shrimp you are using (we use jumbo shrimp), you may want to add the lobster tails first.  Smaller shrimp will take less time to cook. 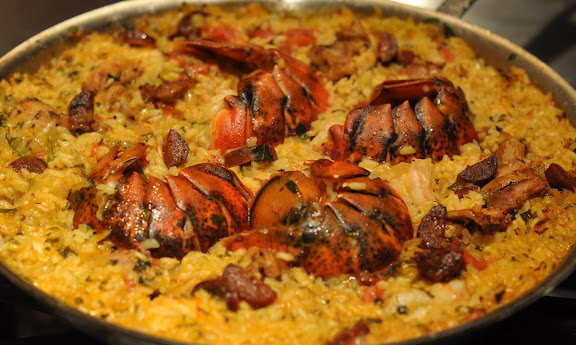 The seafood is done when it feels firm and turns opaque (and the tails will curl up a bit).  Taste the rice and make sure that it is done to your liking.  If necessary, cook a few more minutes until the rice is al dente.  For truly authentic paella, when the rice is done, increase the heat to high for 30 to 60 seconds, then turn off the heat.   This blast of high heat at the end creates a layer of toasted rice on the bottom of the pan, called socarrat.  While essential to genuine Spanish paella, creating socarrat can be a bit tricky (don’t want to burn the rice!) and this homemade version of paella is just as good without it. 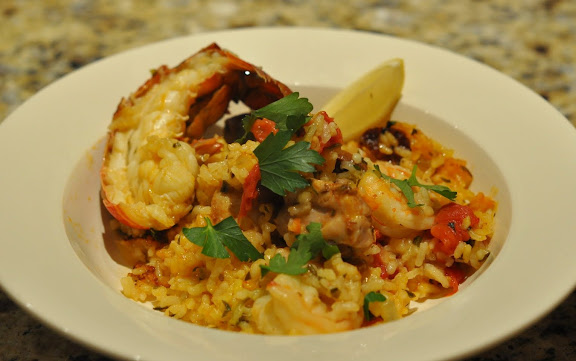 Garnish the paella with chopped parsley and a lemon wedge and serve in a low bowl.  This is a great dish to cook on New Year’s Eve, if you’re planning to stay in for the evening and want to serve something that looks pretty on the plate, tastes decadent and special, but doesn’t require hours in the kitchen.