We’re always looking for new sources of recipes for easy but delicious weeknight meals.  On a recent trip to the grocery store, we found a magazine titled “30-Minute Suppers” by Cook’s Illustrated.  The source is an old favorite, but the magazine itself is new (and should still be available in stores until October, if you’re interested.)  Cook’s Illustrated’s cookbook “The Best 30-Minute Recipe” is one of our most-used books, so we figured the magazine would have lots of recipes we would enjoy as well.  So far, we have tried two recipes from the magazine and were happy with the resulting meals that tasted like they took a lot of effort, but were on the table in just half an hour.  We liked the combination of flavors and textures in this tortellini dish very much:  cheesy tortellini, peppery arugula, sweet and slightly chewy sun-dried tomatoes, crispy prosciutto, bright lemon and rich olive oil.  The only thing we would change is to create more of a sauce for the finished dish.  Next time we make it we’ll see if we can tweak the recipe a bit and post an update here. 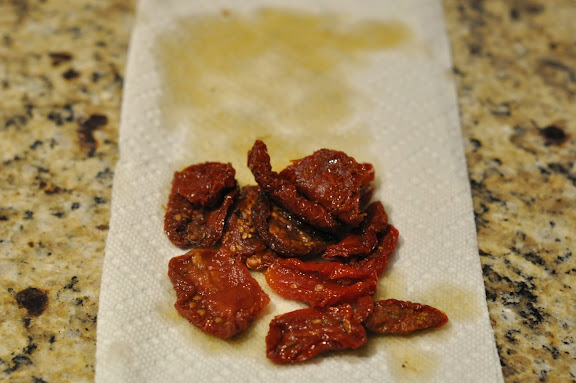 The recipe calls for oil-packed sun-dried tomatoes (look for ones without any herbs or other flavorings), so they need to be drained a bit before cutting them up.  We found it easiest to lay them out on a paper towel and blot off most of the oil. 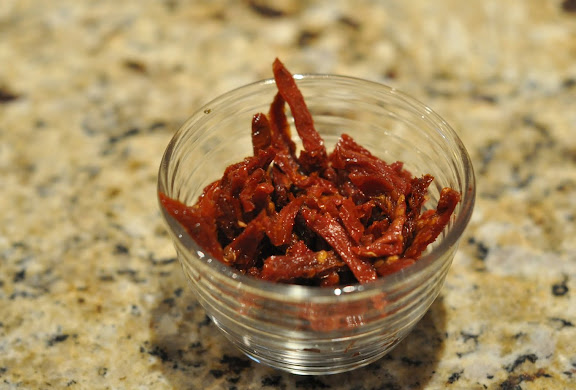 Then slice the sun-dried tomatoes into thin strips. 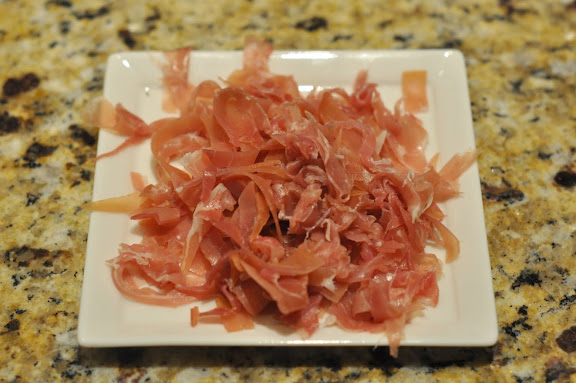 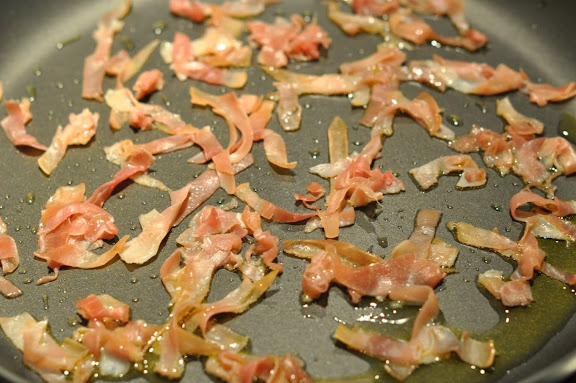 Heat a tablespoon of olive oil over medium-high heat until shimmering, then add the prosciutto and cook until it gets browned and crispy.  While the prosciutto cooks, start heating a pot of water to boil the tortellini. 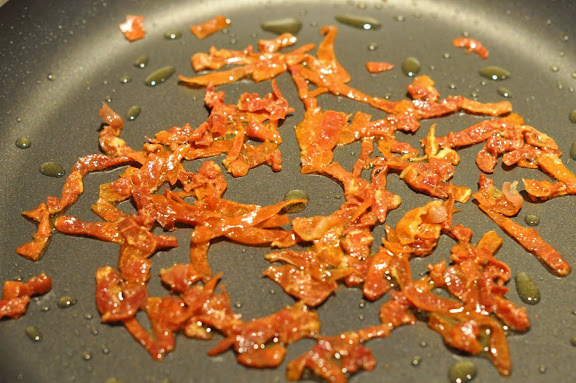 Stir the prosciutto often while it’s cooking so that it gets browned on all sides.  Remove the browned prosciutto to a plate lined with paper towels. 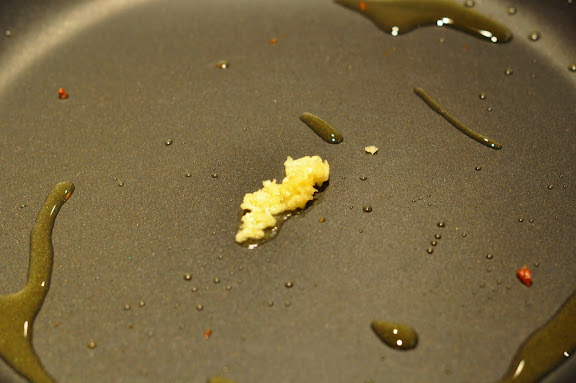 Reduce the heat to medium, add a couple cloves of minced garlic and cook until fragrant — about 30 seconds. 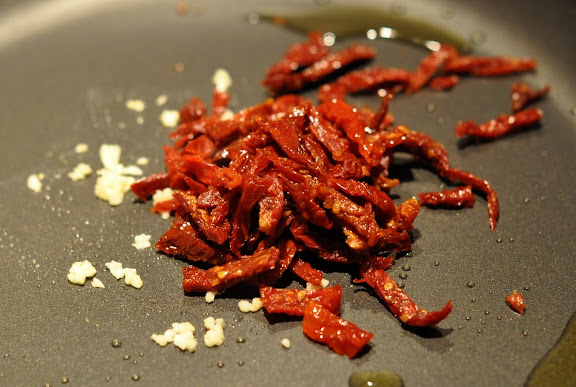 Add the sun-dried tomatoes and cook until they are warmed through — about two minutes. 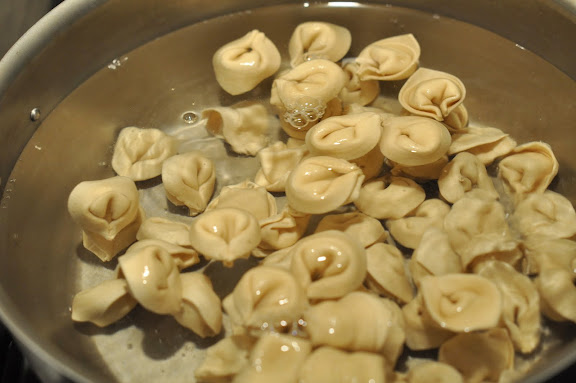 Add about a tablespoon of salt to the boiling water and cook the tortellini until al dente.  We usually use Buitoni Whole Wheat Three-Cheese Tortellini, which you can find in the refrigerated section of most grocery stores (in some stores near the deli, in others we have found it near the cheese and dairy section.)  We like it so much that we almost always have a package in our freezer.  It tastes great (can’t even tell it is wheat pasta), cooks in minutes and doesn’t even need to be thawed before you cook it.  It’s also pretty versatile — we like it with vodka sauce, traditional red sauce and in one of our favorite weeknight soups.  (This mini-commercial for Buitoni tortellini is not sponsored in any way — we just really like this pasta.  A lot.) 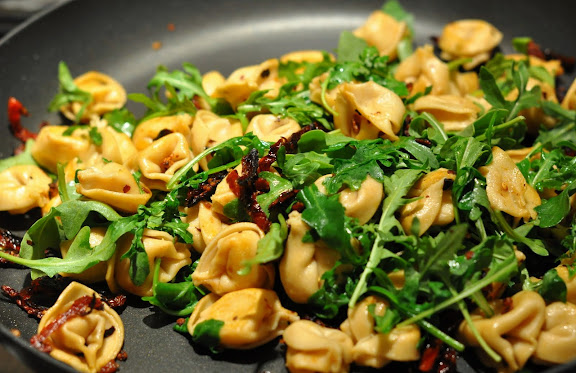 Drain the aforementioned-too-much tortellini, then add it to the skillet and toss with the tomatoes and garlic.  Then take the skillet off the heat and stir in the arugula. 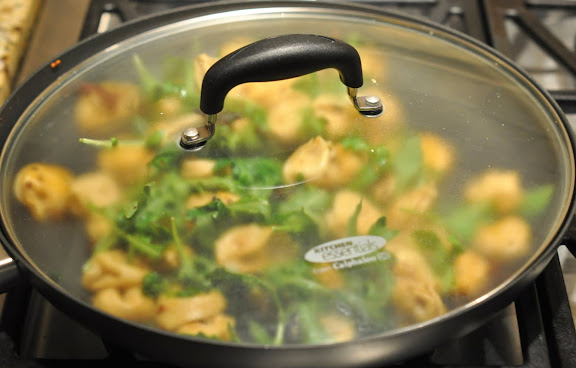 The recipe did not call for this step, but we found that the arugula wasn’t wilting much, so we covered the skillet for about a minute to provide a little steam. 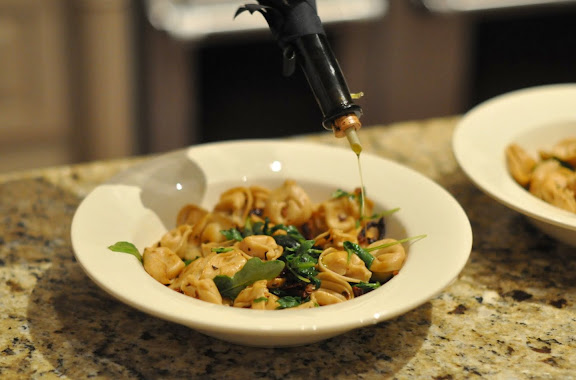 The next step in the recipe is to season with pepper and drizzle with lemon juice.  We decided to also drizzle with some of our more expensive olive oil.  This might also be a good point to add a little reserved pasta water to give the dish more of a sauce texture.  But we didn’t add any water on the night we cooked this, so if it doesn’t work then you didn’t hear it here.  If you try it and it does work, then we told you so!  (Let us know if it does.) 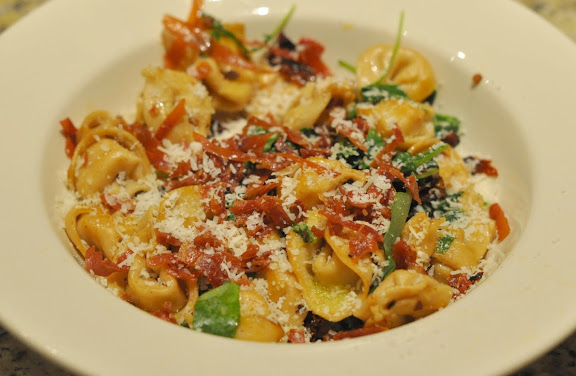 Top the tortellini with crispy proscuitto and grated parmesan, then serve.  Like we said, the flavor and texture combinations work really well together, but we think this dish could use a little more sauciness (as in liquid, not impertinence) to really knock it out of the park.