Whenever we have an exceptional and memorable meal at a restaurant, we like to attempt to recreate the dish at home.  This recipe is one of our most successful attempts thus far.  We discovered the dish at Vic and Anthony’s Steakhouse in Houston.  Pretty much every summer for the past several years, we travel to Houston to attend what we affectionately dubbed the “Baseball Extravaganza” weekend with my parents, who are huge Astros fans.  The Extravaganza involves a night game on Saturday and day game on Sunday, with two nights lodging at a wonderful hotel — the baseball-themed, but still-surprisingly-classy Inn at the Ballpark, which is located right across the street from Vic and Anthony’s.  For many years, the steakhouse was not open on Sunday nights, so we would longingly pass it on our way to other restaurants downtown after the Sunday games.  But the planets aligned for us a couple of Extravaganzas ago and we found ourselves lucky to finally be enjoying a meal at this elegant dining establishment.  (FYI, their website now indicates they are open on Sundays, so this year’s Extravaganza will most likely include a visit.)  It was a memorable meal — or at least mine was, to me — I don’t remember what anyone else had to eat, but my “veal chop milanese” was amazing.  It was one of those dishes that is so good you insist everyone else at the table have a taste (but not too big of a bite!)  So I was absolutely thrilled when Dan found a similar recipe in his Michael Symon cookbook.  Symon’s recipe is a little more complex than the average weeknight dish, but it’s worth it on a weekend or weeknight when you are craving a unique presentation of baby cow. 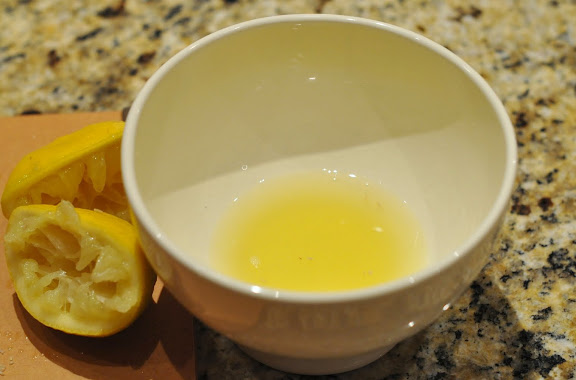 Start with the juice of 1 lemon. 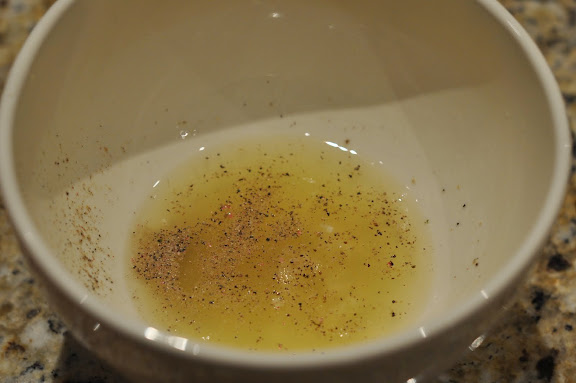 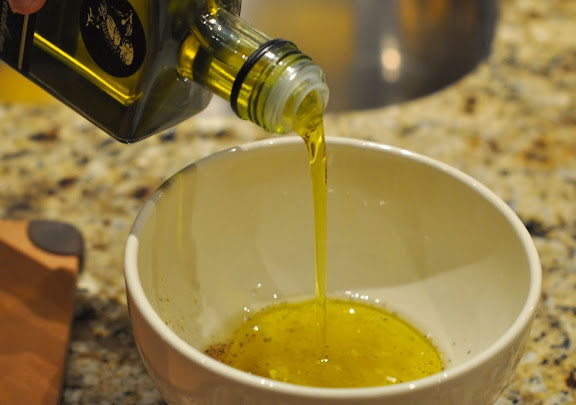 Add about 1/4 cup olive oil and whisk all the ingredients together. 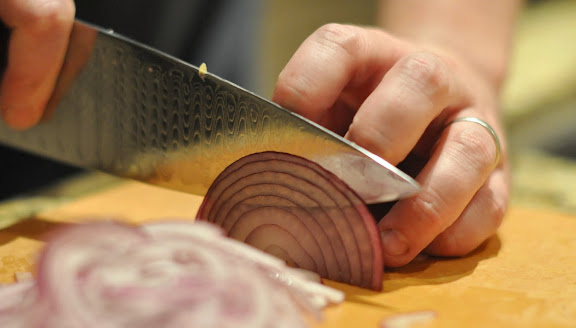 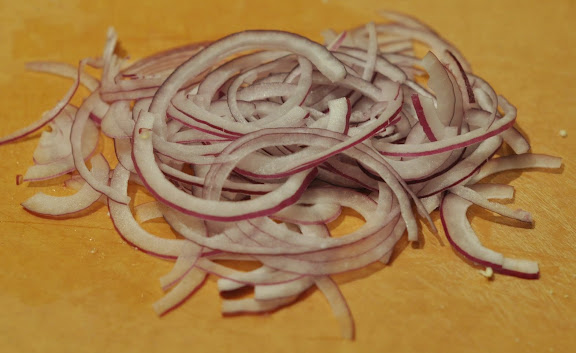 The onion slices need to be thin so that they don’t over-power the veal. 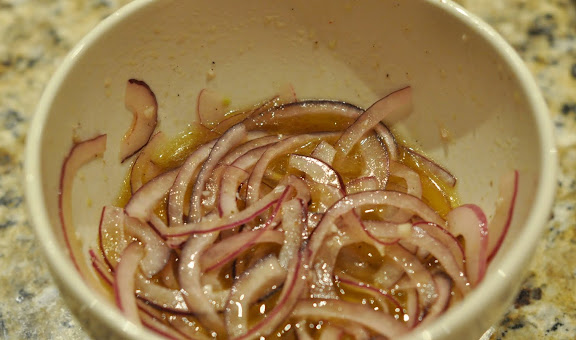 Add the onion to the olive oil mixture and toss.  Allow the onions to marinate while you prepare the rest of the meal. 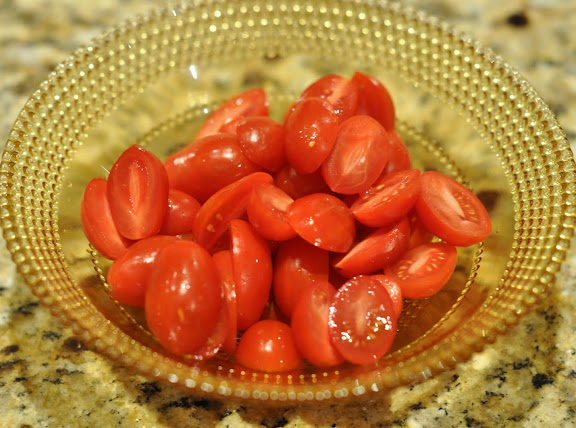 Cut about 1 cup of grape tomatoes in halves. 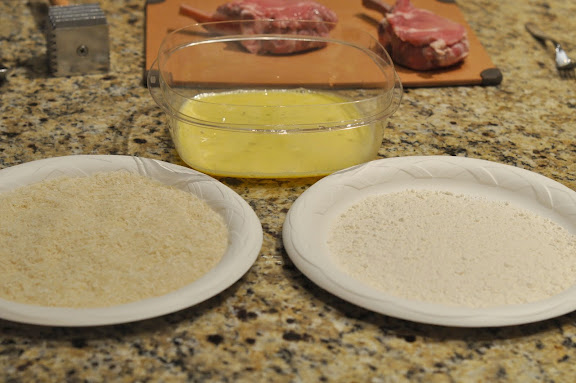 Dan likes to set up his breading station ahead of time.  Left-to-right, we have panko with grated parmesan, eggs lightly whisked, and flour. 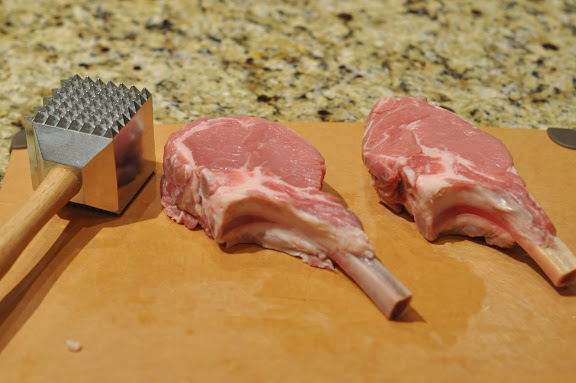 Time to pound the chops within 1/4 inch of their existence.  Our Michael Ruhlman meat mallet is just the weapon for the job.  When tenderizing meat this way, Dan puts plastic wrap over the meat to keep any little bits of meat from flying around (yeah, gross) and to keep it all in one piece. 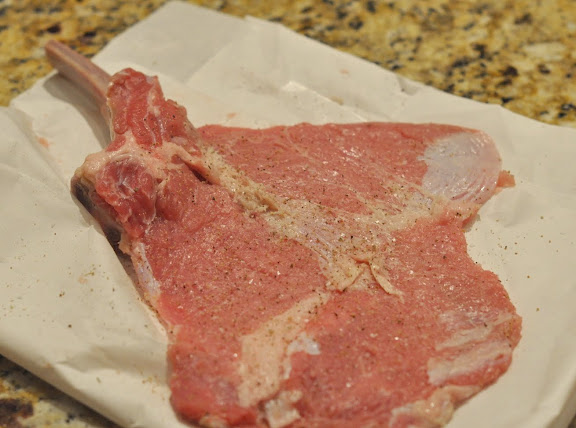 Season the pounded veal chops with salt and pepper. 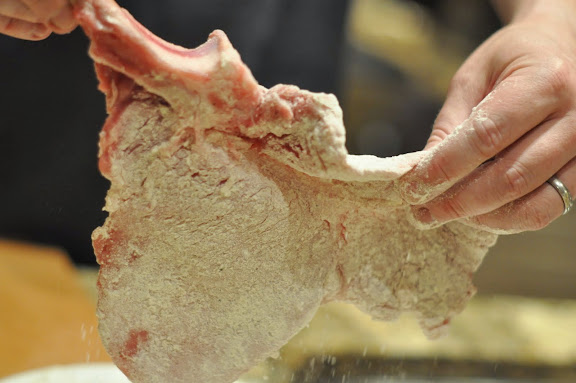 Dredge the first veal chop in flour and shake off the excess.  One cool thing about veal chops is that the bone acts as a handy handle. 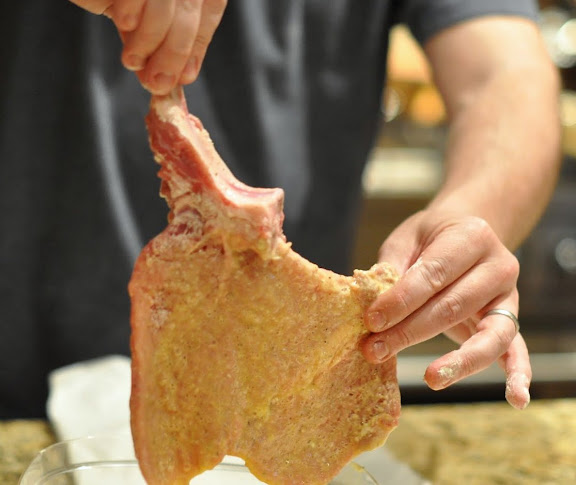 Next, dip the chop in the egg wash… 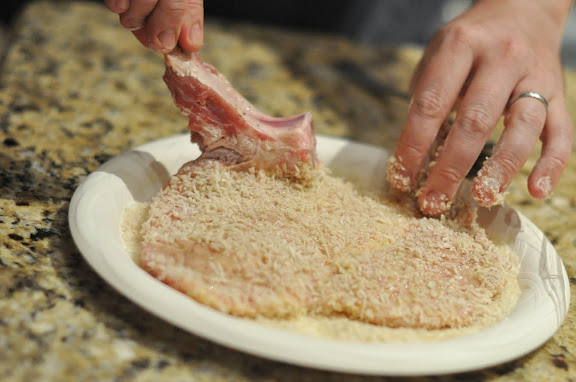 …then coat it with the panko breadcrumbs. 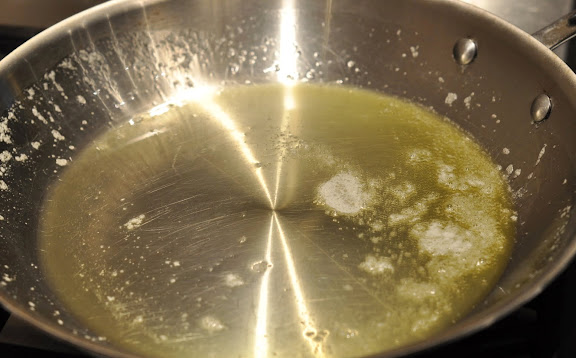 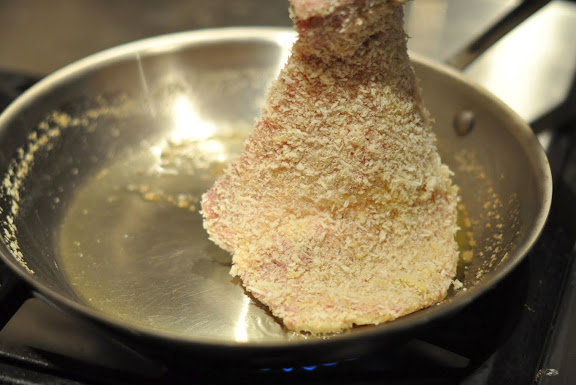 Carefully add the veal chop to the pan. 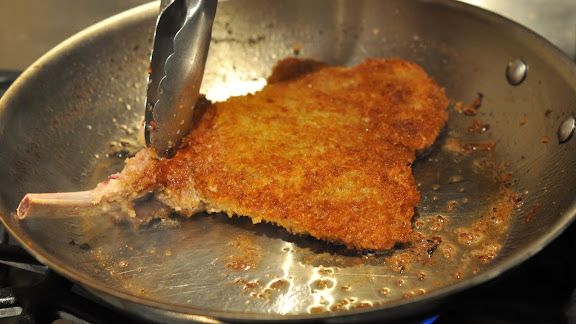 Cook the chop until it is golden brown on both sides — about 4-6 minutes per side.  You may want to occasionally use tongs to press the bone part down on the pan to ensure it cooks through, since this area of the chop may not be as thin as the pounded area.  If you are cooking 2 chops (and this veal is so good that you should probably go ahead and do two), rest the finished chop on a piece of foil or small cookie sheet in the oven at 200 degrees while you follow the above steps with the second chop. 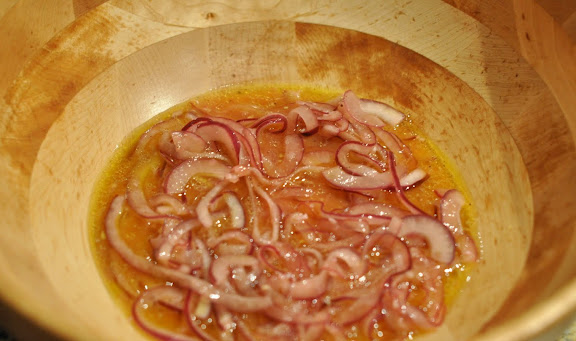 Place the marinated onion in a large bowl. 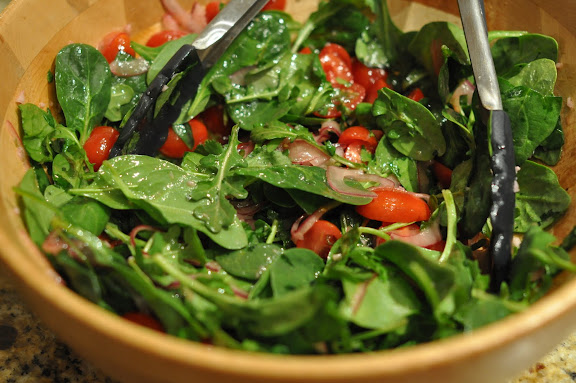 Add the tomatoes and arugula to the onions and toss it all together.  As you may notice in the photo, we used arugula and spinach on the night we made this recipe.  Arugula can sometimes be hard to find in the grocery store, especially in large quantities (this recipe calls for 3 cups.)  So we mixed in some baby spinach and it turned out great. 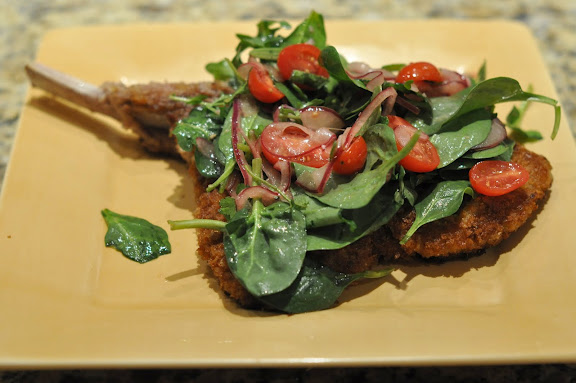 Spoon the arugula salad over the cooked chop and you have Veal Milanese — exclusive restaurant food, cooked at home.