One of the reasons we are able to cook as often during the week as we do is that we try to cook a protein that we can use in another dish later in the week — two meals out of one.  I have mentioned before that I’m not a fan of leftovers, so transmogrifying the remaining protein into a different meal is my thing.  As you may have seen, we recently made a delicious pot roast. It was a lot of beef for two people, so we needed a recipe for the leftover meat. I found one that was perfect for a weeknight and had the additional benefit of being reminiscent of a dish my Grandma used to make — Beef and Noodles. Grandma’s Beef and Noodles is not something we’ve ever attempted to make, and I’m not even sure an actual recipe exits.  It’s one of those magical meals that the creator just knows how to make, and hopefully someone has been able to witness it enough times to re-create it.   My mom watched and learned, but only makes it for special occasions because the men in our family have been known to gorge on it to the point of near-sickness. It’s seriously that good.  This stroganoff recipe is a close enough second that it brought up many fond memories of Grandma (yet not SO good that Dan ate himself sick.)  We’ll work on learning Grandma’s Beef and Noodles, but in the meantime, this stroganoff is a decent substitute and a great use of leftover pot roast. Ingredients include leftover beef (the original recipe calls for cooking beef tenderloin), shallots, mushrooms, butter, egg noodles, heavy whipping cream (or creme fraiche), paprika, Dijon mustard, beef broth, shallots and salt and pepper.   The recipe also calls for Cognac, which I forgot to put in the ingredient line-up for the photo.  Oh, and Dan decided it would be better to use sour cream instead of whipping cream (after I took the ingredient line-up photo and many of the ingredients had already been used.) 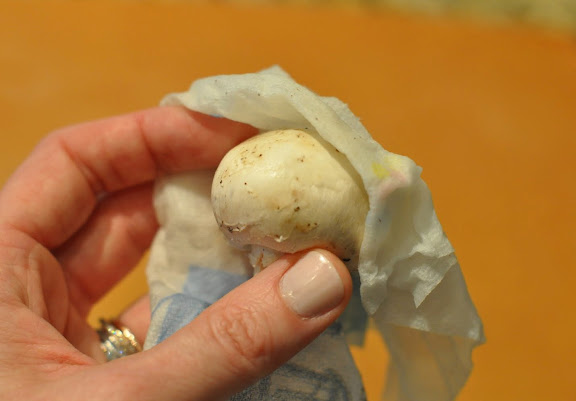 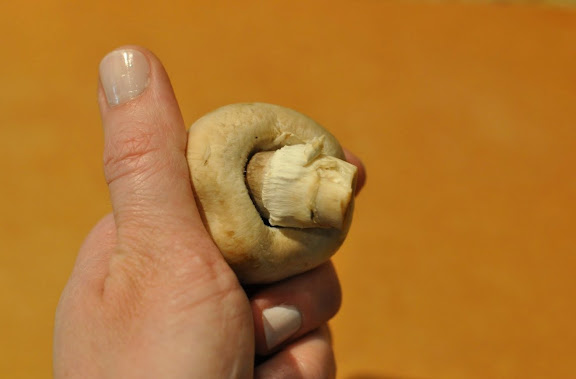 Then remove the stem from each mushroom and discard (the stem, not the cap.  Or save the stems to chop up and mix with breadcrumbs and stuff into something later in the week — like pork chops or peppers.) 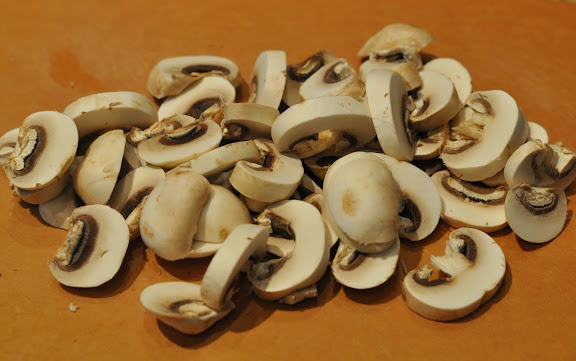 The recipe calls for “thickly slicing” the mushrooms.  So we sliced them thicker than we normally would. 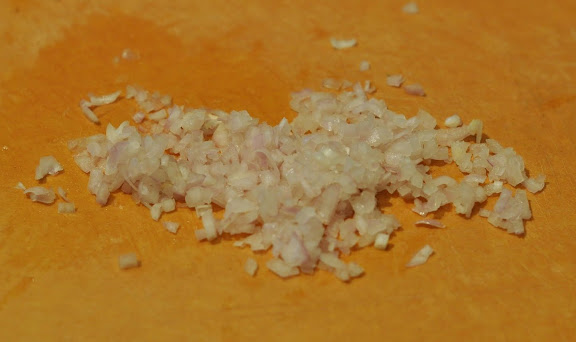 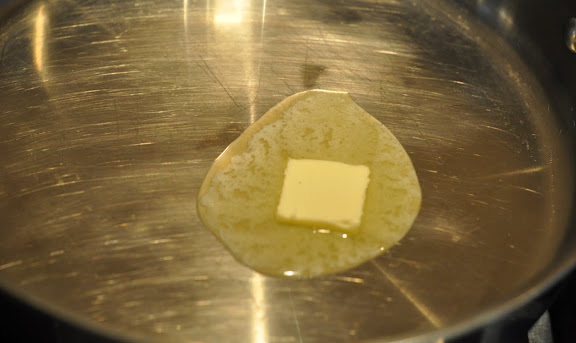 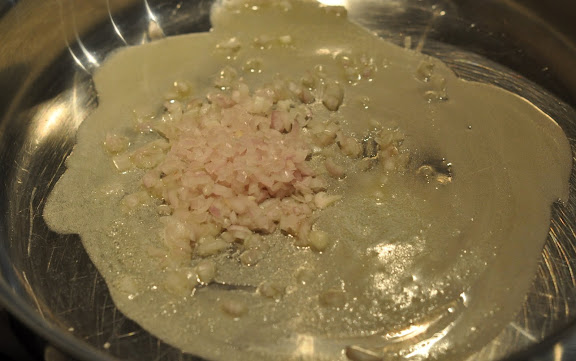 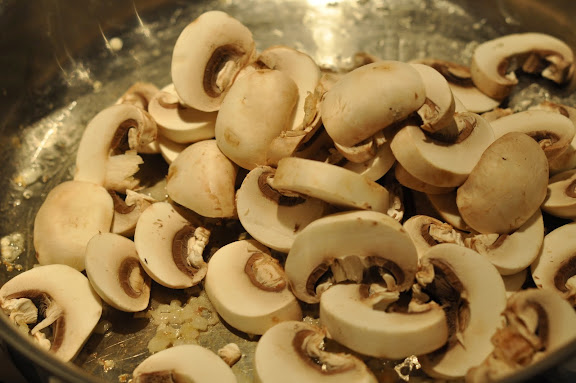 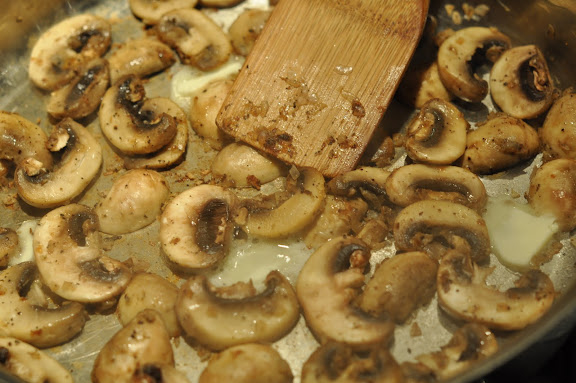 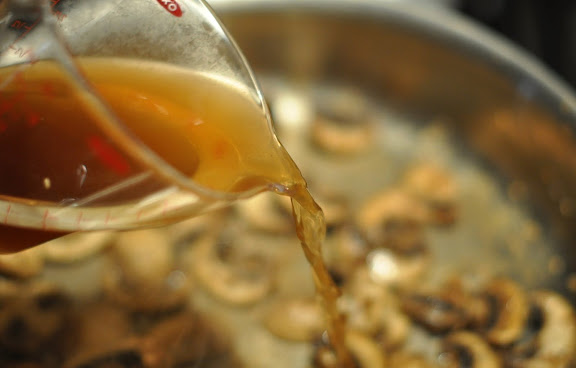 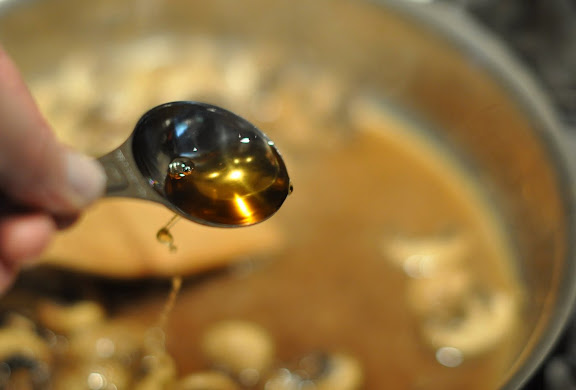 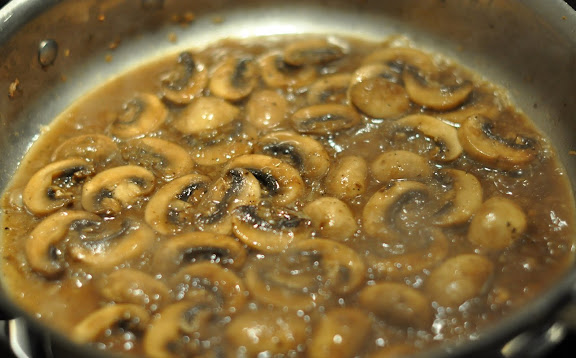 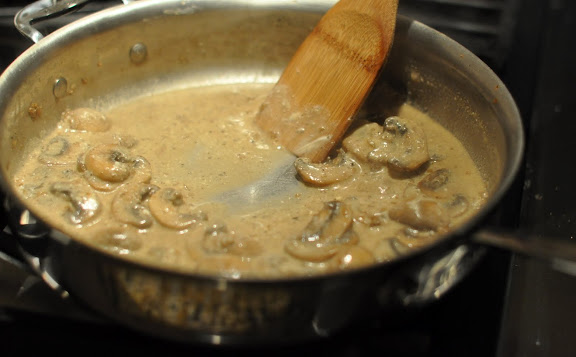 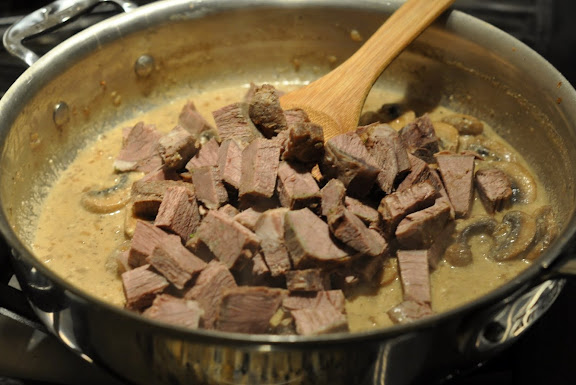 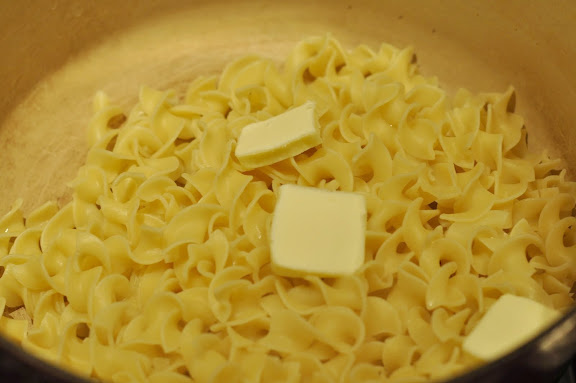 I should have told you to be cooking your egg noodles per package directions while you were doing all of the above.  So, yeah, do that.  When the noodles are done, drain them and toss with a couple (or three) pats of butter.  (Perhaps this is part of the magic involved in Grandma’s Beef and Noodles — lots of butter.) 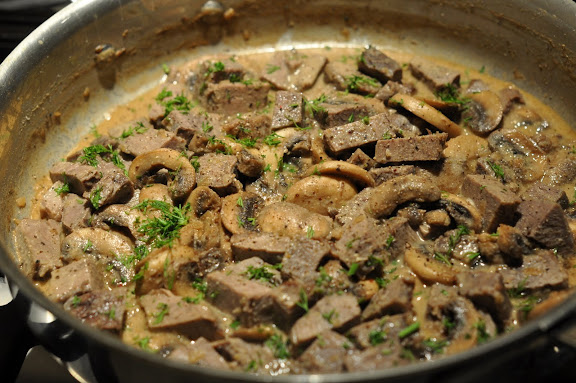 Simmer over medium-low until the beef is heated through — about 5 minutes.  Then stir in the chopped fresh dill.  Season with salt and pepper to taste. 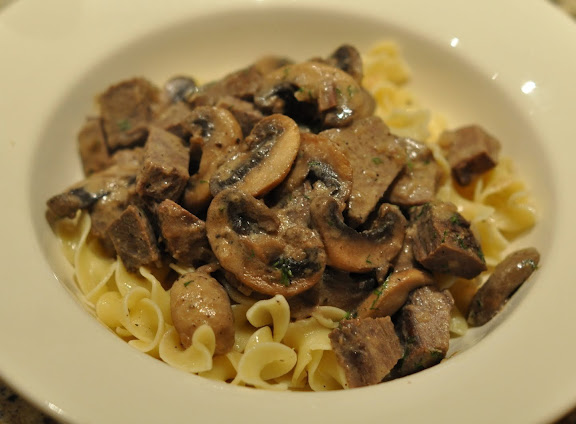 Spoon the beef mixture over the noodles and serve.  We served ours with a simple side salad (and loving thoughts of Grandma Helen.)