We’re not sure why, but pot roast is not something we cook very often.  In fact, this may be the first time we’ve ever made it.  Maybe it’s because we don’t eat a lot of red meat.  Or because I never thought I really liked pot roast (turns out I do.)  But I happened to catch an episode of the Barefoot Contessa’s cooking show when she made her “Company Pot Roast,” and I was intrigued.  It seemed like a pretty easy recipe that would be perfect for a Sunday evening.  We didn’t have any company to share the pot roast with us on the night we made it, so I thought the leftover beef would be good in another dish later that week (turns out I was right.)  Hint:  the dish involves beef, noodles and creamy sauce — stay tuned for the post later this week! 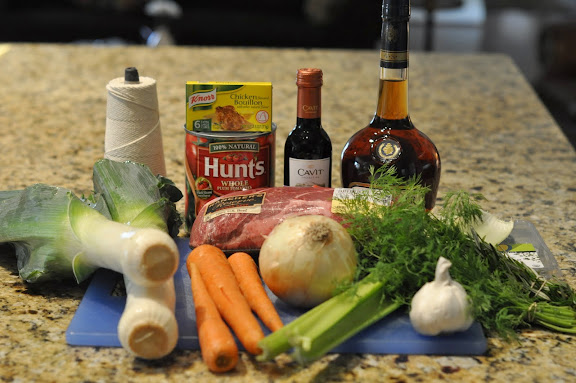 Pot roast ingredients include a boneless beef chuck roast, leeks, carrots, celery, yellow onion, garlic, canned tomatoes, chicken bouillon, red wine, Cognac and fresh thyme and rosemary (strangely, it seems that some dill made its way into the above photo, but it’s not one of the ingredients.  Oops.)  The recipe also calls for salt & pepper, flour, chicken stock, olive oil and butter at various stages of the cooking process. 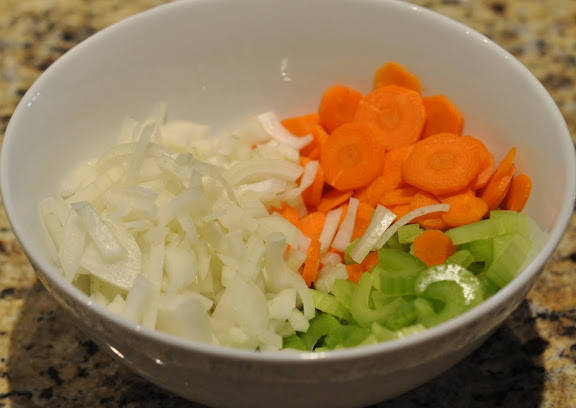 Start by prepping the vegetables — chop the onions, celery, carrots… 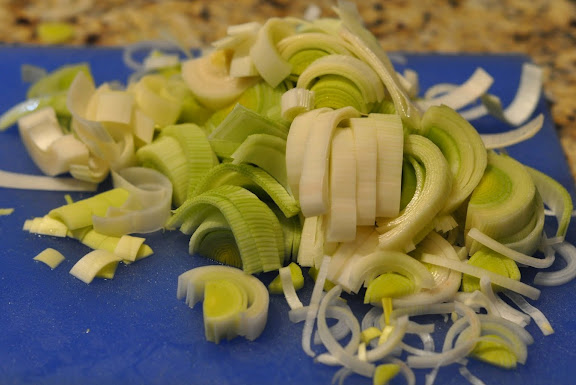 …and white and light green parts of the leeks.  (Be sure to rinse the leeks as they can sometimes be pretty sandy.) 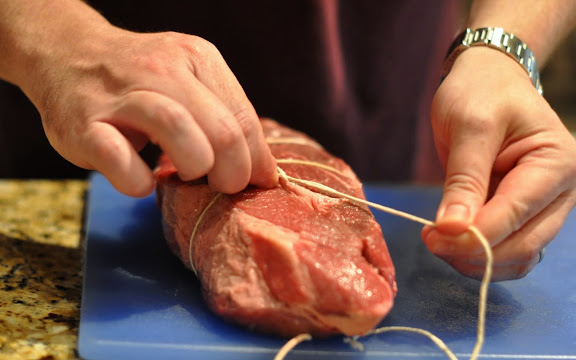 Next, pat the beef dry with a paper towel and tie it up so it will stay together while the roast cooks slowly in the oven.  It will become very tender, so tying it up helps keep the meat in one piece. 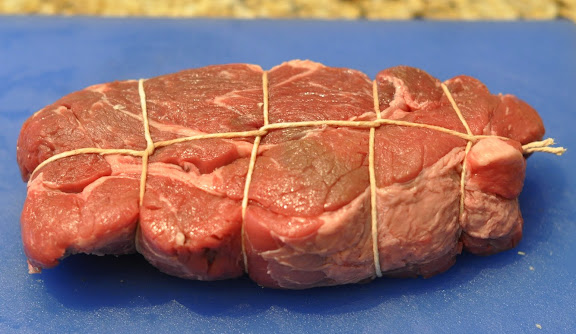 Dan isn’t usually 100% confident in his trussing technique, but it always does its job very well. 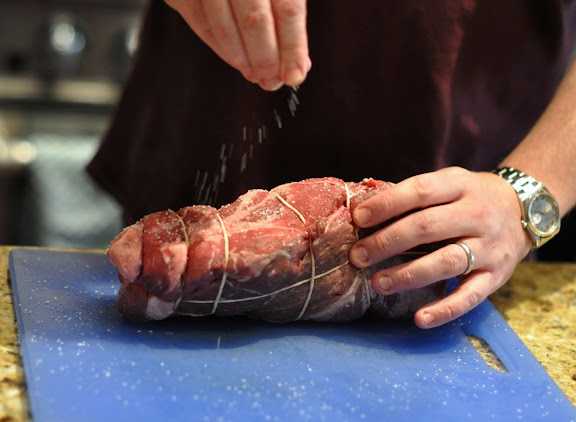 Season the beef on all sides with Kosher salt and pepper. 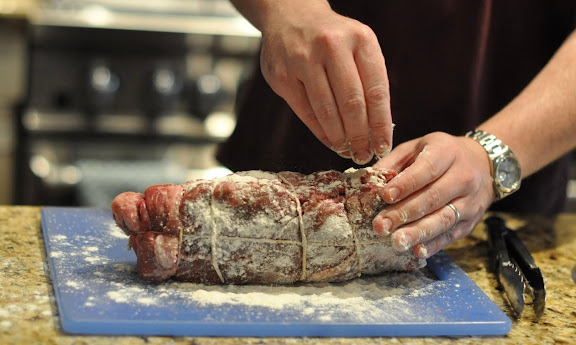 Dust the roast on all sides with a light coating of flour. 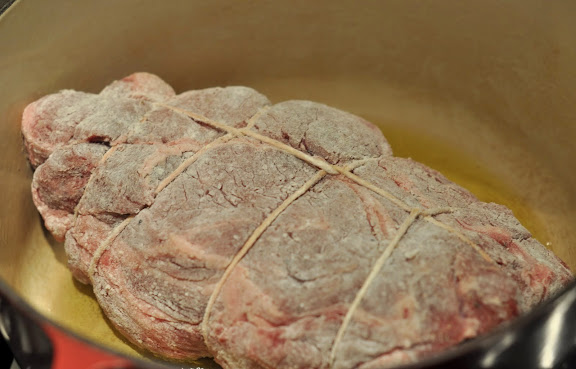 In a Dutch oven, heat 2 tablespoons of olive oil over medium heat, then add the roast and sear it until the beef is browned on all sides. 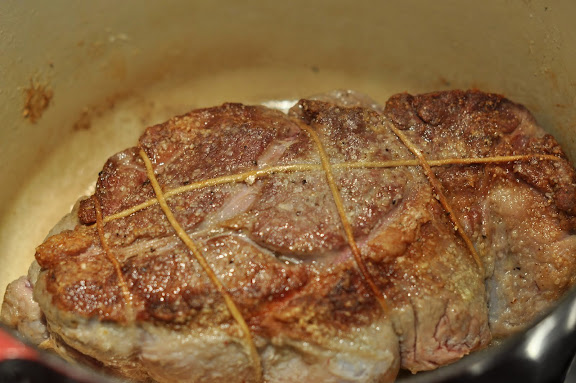 It should take 4-5 minutes per side to brown the beef.  (Incidentally, this was the moment during Ina’s cooking show that sold me on this dish.  The moment I knew that Dan needed to cook this and I needed to eat it.) 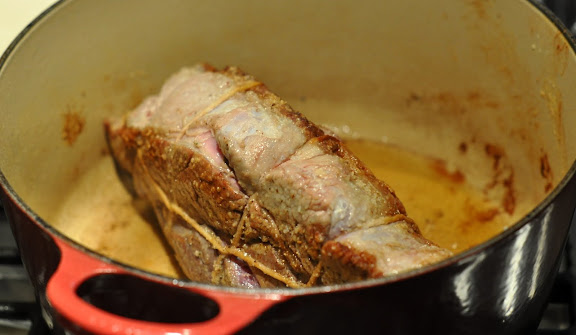 “All sides” includes the, um, sides.  As in, not just the top and bottom.  You get the picture.  Literally.  (Ok, I’ll stop.)  After the roast is browned on all sides, remove it to a plate. 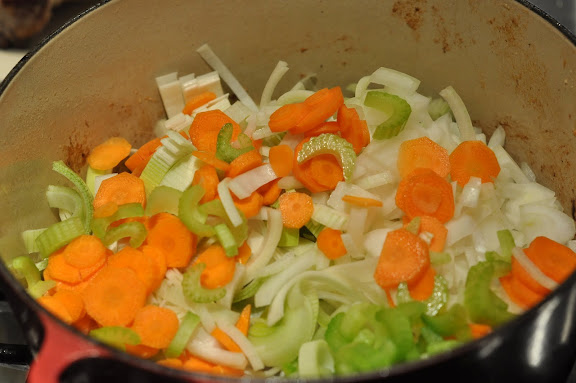 Next, add a couple tablespoons of olive oil to the Dutch oven, then add the carrots, celery, onion, leeks, garlic and salt and pepper to the Dutch oven.  Cook the vegetables over medium heat until they are tender but not browned — about 10-15 minutes. 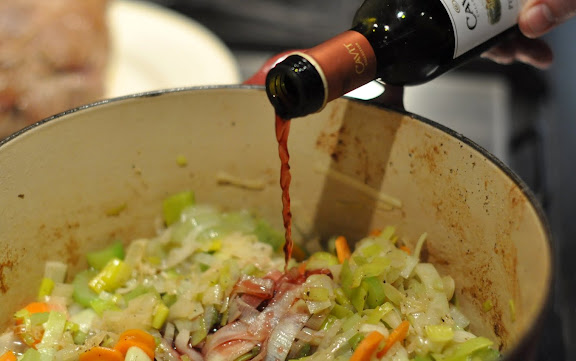 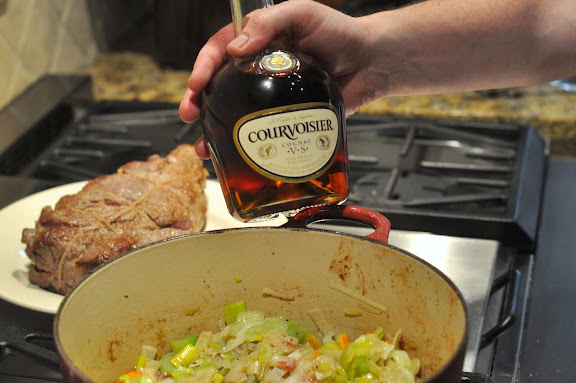 …and the cognac (anyone else think of the SNL character “The Ladies’ Man” when you see Courvoisier?  Just us?)  Bring to a boil. 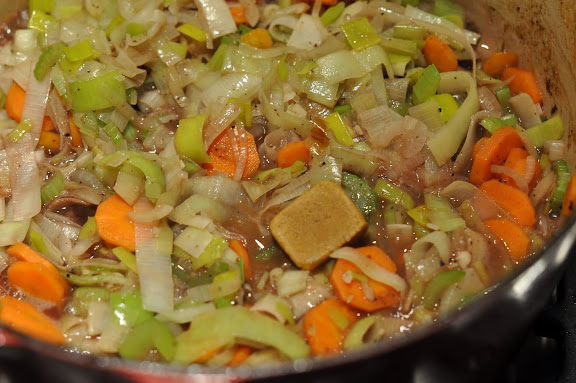 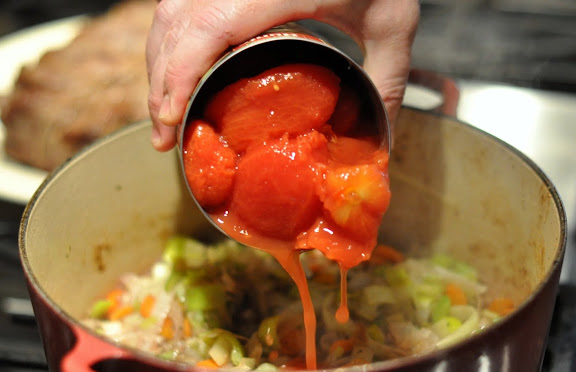 …and tomatoes (with their juice) and salt and pepper. 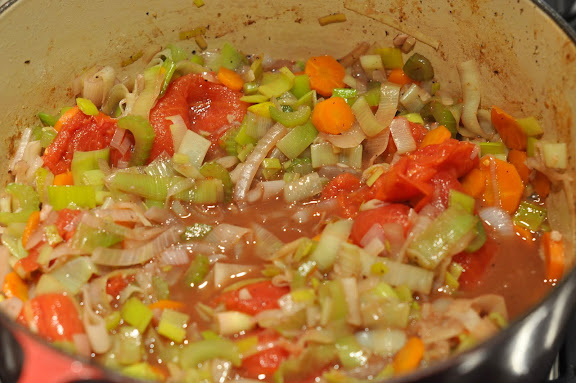 The original recipe called for adding 1/2 cup of chicken stock at this point, but Dan thought there was enough liquid already.  He ended up adding about 1/4 cup of stock later in the cooking process.  You just want to make sure that the veggies and beef don’t dry out.  If you don’t have chicken stock, you can also use water, since this recipe has tons of flavor from the other ingredients. 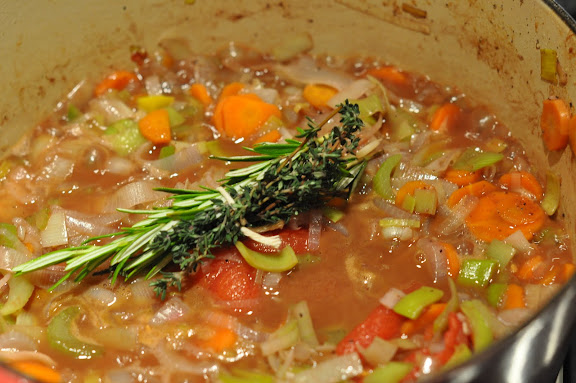 With kitchen twine, tie together a couple of branches of fresh thyme and rosemary and add them to the Dutch oven. 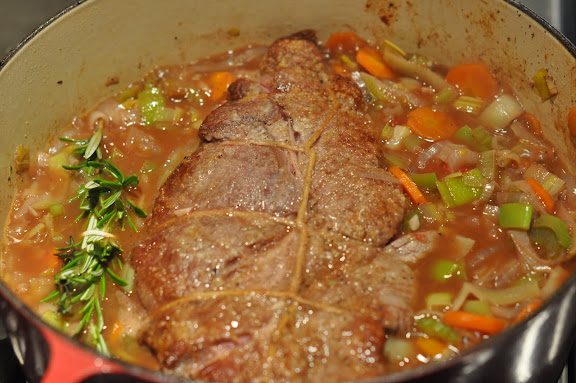 Put the beef back in the Dutch oven and bring everything to a boil. 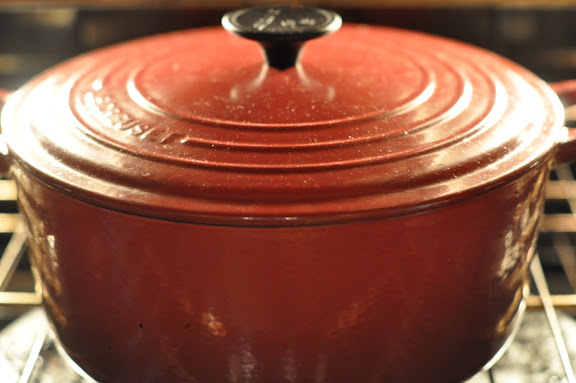 Cover the Dutch oven and place it in the regular oven pre-heated to 325 degrees to cook for about an hour.  (After this first hour, the roast will continue to cook for a while at a lower temperature.) 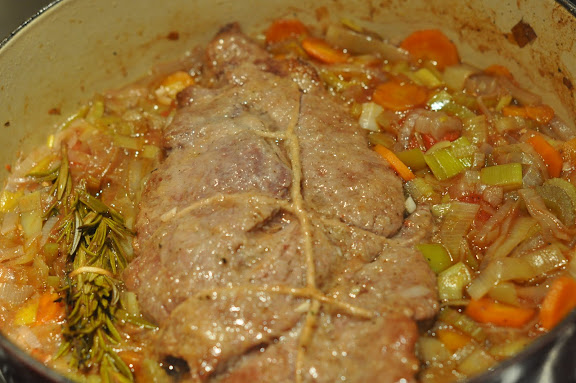 After an hour, turn the oven heat down to 250 degrees and cook the roast for about another hour and a half. 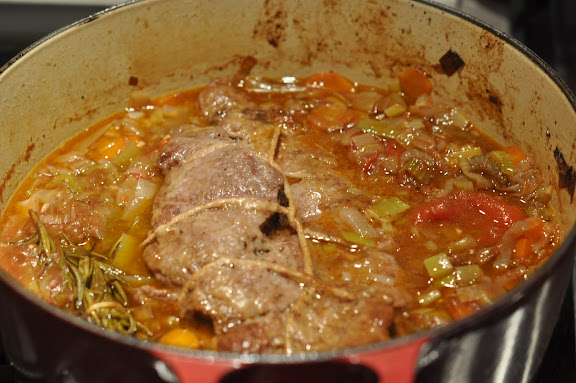 The beef is done when it is fork tender or about 160 degrees internally. 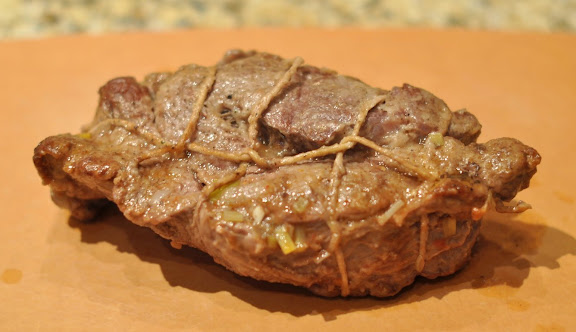 Remove the beef to a cutting board.  It’s a smaller, way more delicious version of itself at this point. 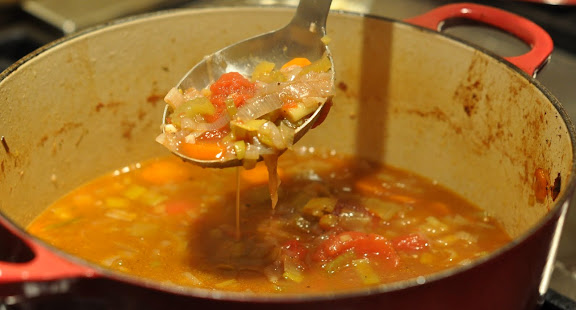 Take out the thyme and rosemary bundle and discard.  Then remove about a cup (or more if you like your pot roast sauce/gravy extra chunky) of the vegetables to a bowl and set aside. 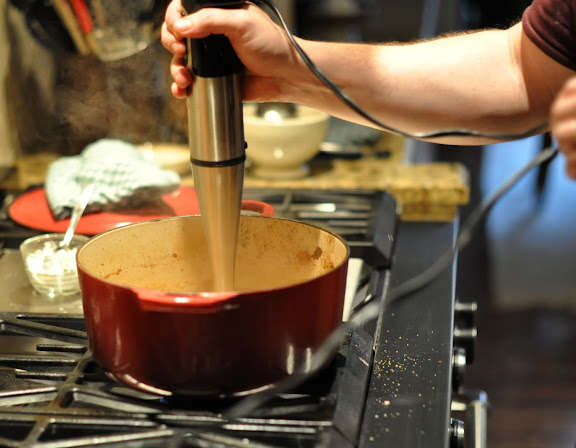 Either puree the remaining vegetables and liquid in a food processor or blender — or, if you love kitchen gadgets as much as Dan does, use your handy immersion blender to puree everything right in the Dutch oven. 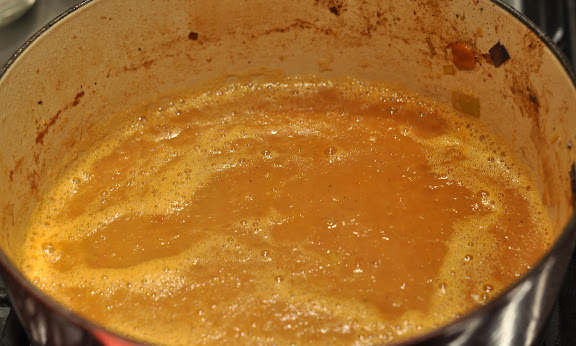 Return the sauce/gravy to a simmer. 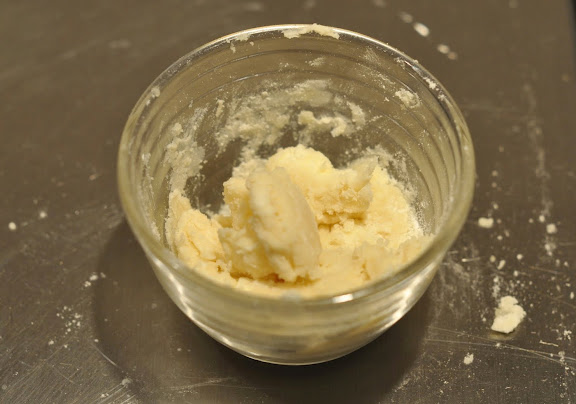 With a fork, mash together about a tablespoon of flour and butter in a small dish. Add the flour/butter mixture to the simmering sauce/gravy and stir in until thickened — about 2 minutes. 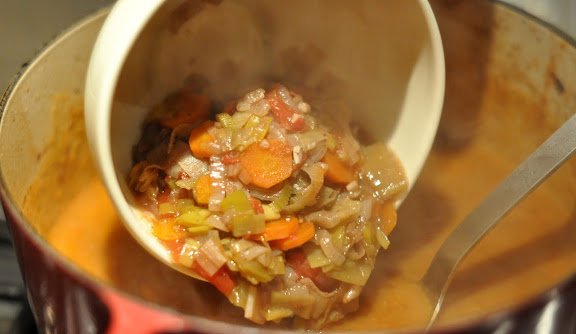 Add the reserved veggies back to the sauce/gravy. 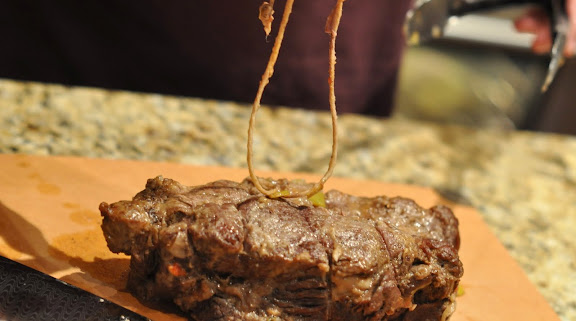 Cut the twine off the roast and slice the meat into serving-sized pieces. 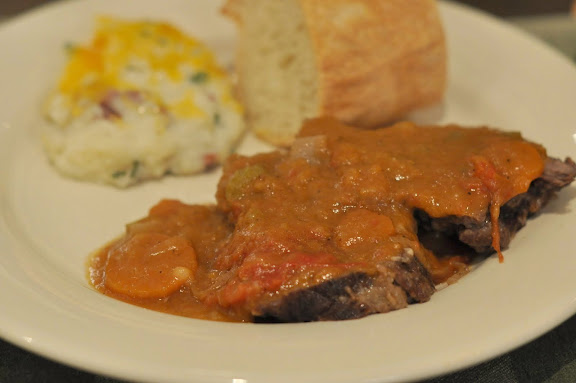 Spoon the sauce/gravy over the beef and eat!  We served ours with smashed potatoes and homemade sourdough bread.  This is a great weekend recipe — your home will smell so good all afternoon and the end result is the perfect comfort food of rich, beefy goodness.