We like to think of cauliflower as a versatile, guilt-free cravings-buster. It works well as a substitute for pasta in “mac-n-cheese.” We’ve seen recipes for cauliflower “fried rice” that look good enough to try sometime when we feel like Chinese food, but don’t want all the calories. One of our vegan cookbooks even has a recipe for cauliflower “meatballs.” (A little skeptical about that one). I’m not about to tell you that cauliflower will satisfy a craving for a juicy ribeye or tender filet mignon, but these cauliflower steaks are a hearty and delicious option for a vegetarian dinner. As much as we love our roasted potatoes, this recipe for garlic-roasted cauliflower is a great alternative with less calories and carbs but similar roast-y flavor and texture. Even better, the cauliflower cooks in about half the time as the potatoes and does not require parboiling. Win, win! Now if only someone could please come up with a way to make cauliflower taste like fried chicken, we would be forever grateful. 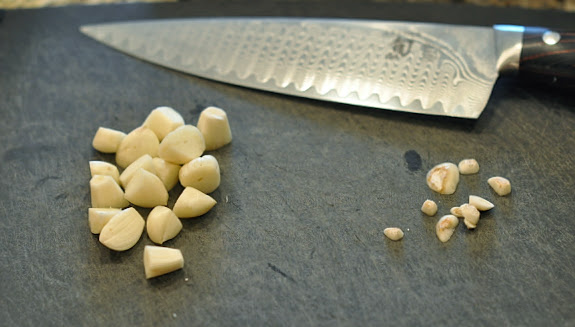 The original recipe calls for a whole head of garlic, with the cloves separated and boiled in water for 15 seconds to make them easier to peel. Because we didn’t want to use quite that much garlic, we modified the recipe by using 6 (big) garlic cloves and peeling them after gently smashing each clove with the flat side of a knife. Cut off and discard any tough ends and/or brown spots, then cut the garlic into small chunks. 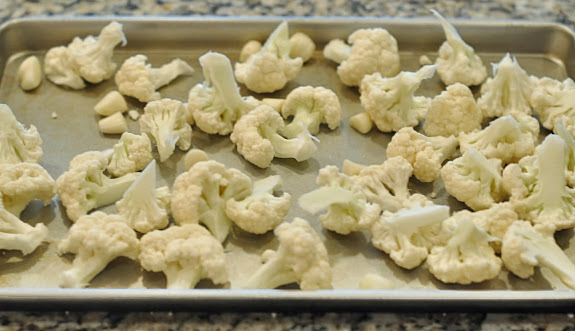 Trim the cauliflower and cut it into large florets. 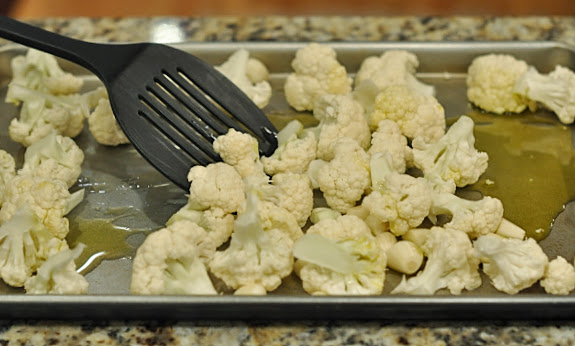 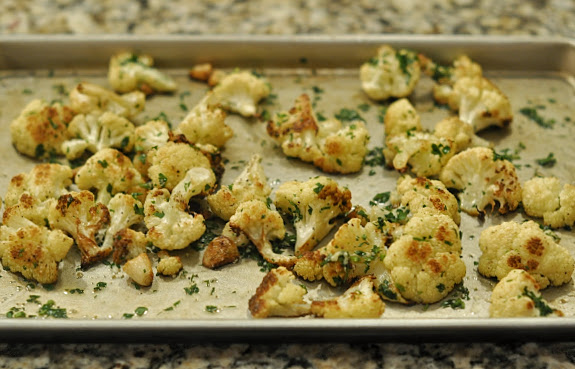 Toss the roasted cauliflower and garlic with a drizzle of olive oil, a squeeze of lemon juice and some chopped parsley. Taste and add more olive oil, lemon juice and/or salt as needed. The original recipe also calls for garnishing the cauliflower with toasted pine nuts, but we’re not huge fans so we usually leave them out. Sprinkle a little grated Parmesan cheese on top to add a bit of rich, nutty flavor. 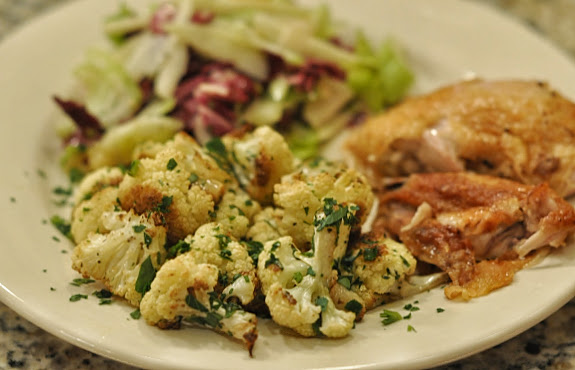 We served the cauliflower with roasted chicken and celery apple salad. Roasted potatoes will always have their place in our meal rotation—they pair extremely well with Dan’s traditional St. Patrick’s Day corned beef, for example—but it’s nice to have an alternative that is healthier, easier to prepare, and tastes just as delicious. Good ‘ole cauliflower. If we ever muster up the courage to try those cauliflower meatballs the next time we’re craving Sunday sauce and meatballs, we’ll be sure to let you know. (Don’t hold your breath.)