File this one under successful mistake:  what happened when we screwed up a recipe but somehow ended up with a dish that was even better than the original. Because we like a good chicken and rice dish (this one is a particular favorite) and we’re fans of smoky, spicy Southwestern flavor, we figured that this recipe for chipotle chicken and rice would be a winner. So why is the title of this post “chicken tinga tacos” instead of “chipotle chicken and rice”? Because someone mistakenly used brown rice instead of white rice the first time she attempted the recipe, which meant that the dish had to cook a lot longer for the rice to be done, causing the chicken to become tender enough to shred with a spoon (and us to eat dinner about two hours late). On that night we realized that the slow-cooked chicken and rice mixture would be far better suited as a taco filling than a main course. And not just any taco filling—we accidentally created a recipe for chicken “tinga,” which generally refers to meat slowly cooked in a chipotle sauce and served shredded in a taco or on a tostada. The first night we ate our happy accident, all we could think about was how good it would be wrapped in a white corn tortilla with minced onion, cilantro and a squeeze of lime. I will probably never be fearless in the kitchen, and my cooking will definitely never be perfect, but it’s comforting to know that sometimes it turns out that a mistake is just what the recipe needed. 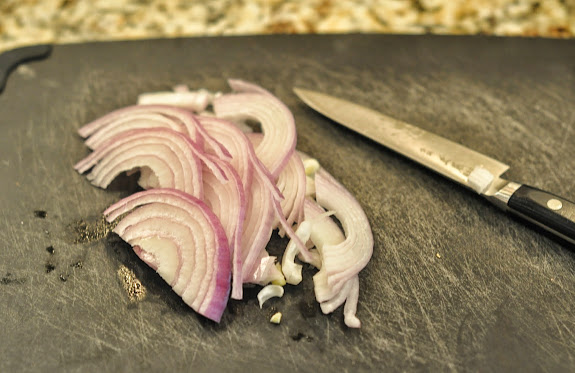 Start by thinly slicing half of a red onion (save the other half to finely chop and serve in the tacos). 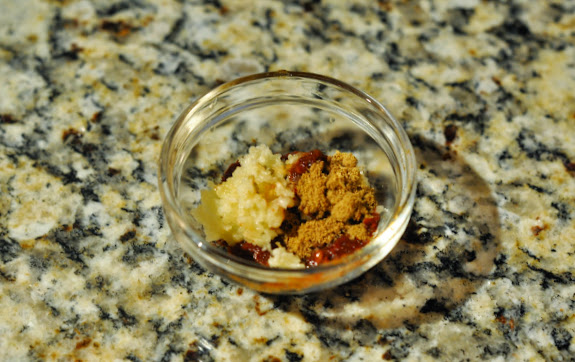 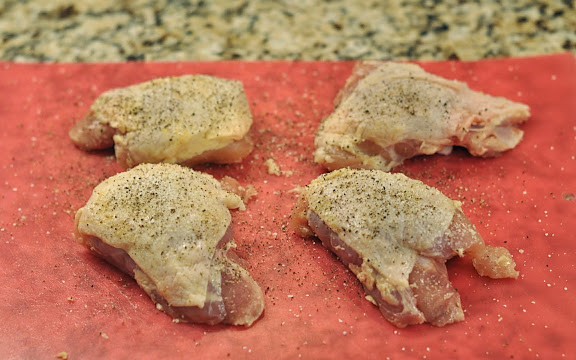 Trim the fat from the chicken thighs and season them on both sides with salt and pepper. We used bone-in chicken thighs, but boneless, skinless thighs will also work. 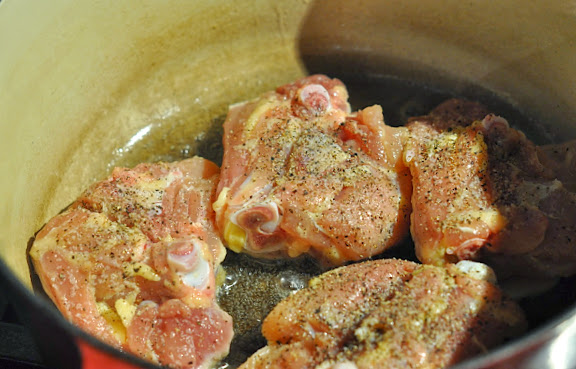 Heat the vegetable or canola oil over medium-high heat in a Dutch oven or other large, heavy-bottomed pot. Add the chicken and cook until browned on both sides—about 6-8 minutes total. Remove the chicken to a plate and set aside. 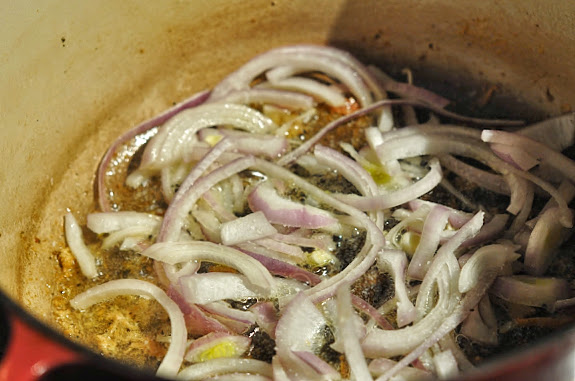 Reduce the heat to medium and add the onions to the pot. Cook until the onions begin to soften—about 5-7 minutes. Then add the garlic, cumin and chile and cook until fragrant—about 1 minute. 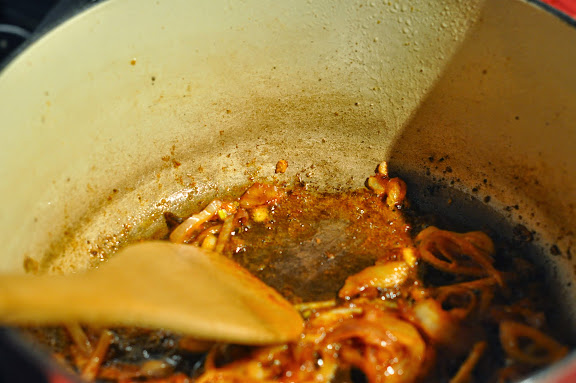 Add the juices from the can of tomatoes and scrape up any browned bits from the bottom of the pot. 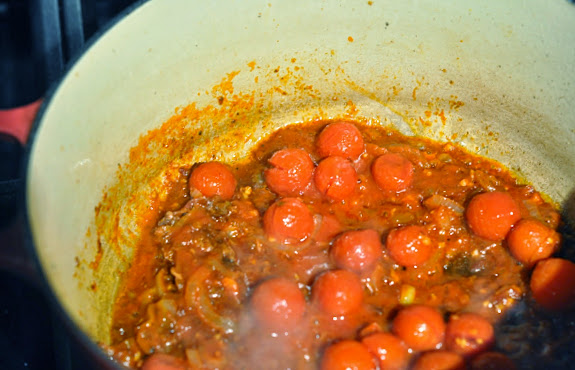 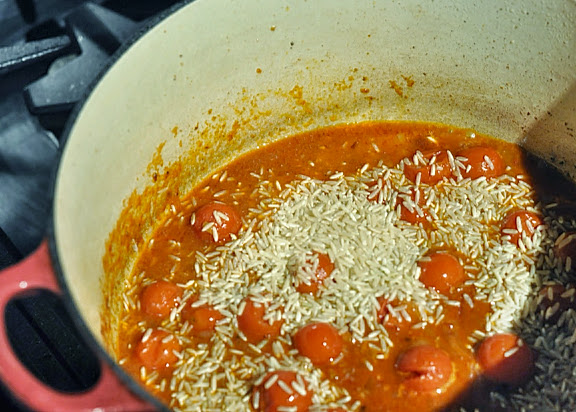 Add the chicken broth and stir in the rice. 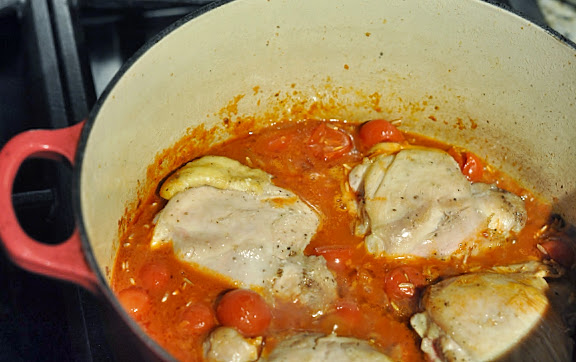 Return the chicken and any accumulated juices to the pot. If using chicken thighs with the skin still on, remove the skin and discard. Cover the pot and cook until the rice is done—about 1.5-2 hours. Keep an eye on the level of liquid in the pot and add more chicken broth as needed. We ended up adding about a cup more broth (in quarter cup increments) during the time the chicken and rice cooked (almost 2 hours). 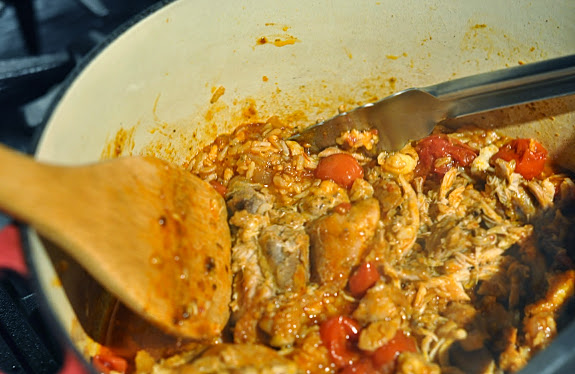 When the rice is done, shred the chicken. It should be tender enough that you can just use tongs and/or a spatula to break it up in the pot. If using bone-in thighs, don’t forget to remove and discard the bones. 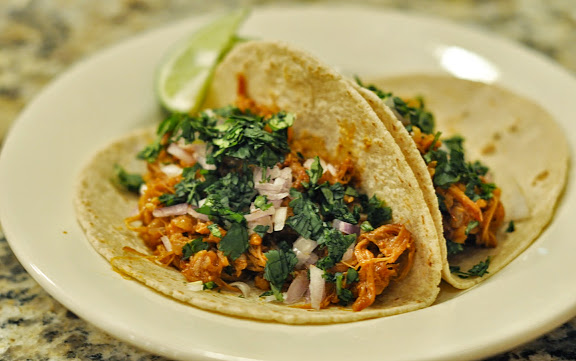 Serve the chicken in soft white corn tortillas garnished with chopped onion, cilantro and a lime wedge. We’ve never eaten tacos from a taco stand in Mexico before, but these tacos make us feel like we have. 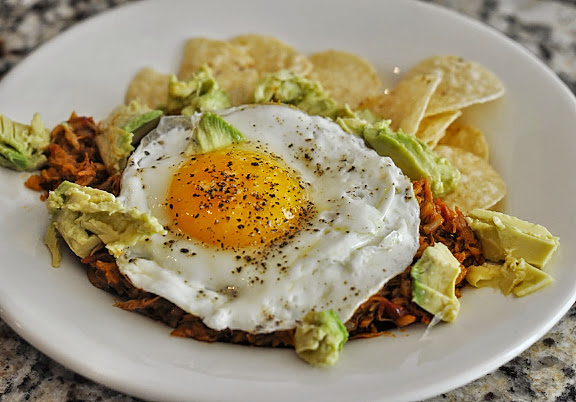 If you have any leftover chicken tinga, we highly recommend eating it for breakfast, topped with a fried egg (which automatically turns pretty much anything into breakfast) and sliced avocado with tortilla chips on the side for a quick and easy version of chilaquiles.