When we think lentil soup, we usually think Christmas. Not only because its delicious-ness is a gift, but also because this soup is the perfect way to use up every bit of the Greenberg smoked turkey that Dan’s East Texas colleagues generously sent us for the holidays. My parents make their own holiday version of lentil soup most years too, using a ham bone and ham, which is what I grew up eating for Christmas dinner every year. The smoked turkey version (with homemade turkey stock) will probably always be our favorite, but this recipe from the cookbook “Slow Cooker Revolution” is also really good, takes less time and effort to prepare, and does not require the use of a smoked turkey or a ham bone. So realistically, we can (and will!) make it more often than once per year.  Although the list of ingredients is rather long (onion, garlic, olive oil, tomato paste, dried porcini mushrooms, thyme, chicken and vegetable broths, bacon, carrots, portobello mushroom caps, lentils, bay leaves and Swiss chard), the slow-cooker does most of the work, and the nearly vegetarian result (the bacon is just for flavor) is a lighter, yet still robust and earthy take on our old holiday favorite. Merry Eating! 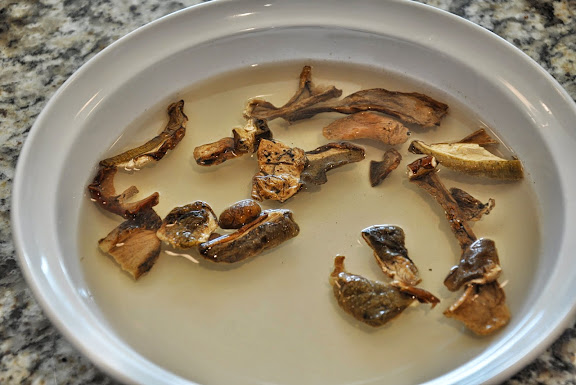 Start by prepping all the ingredients for the slow-cooker. The original recipe calls for “dried porcini mushrooms, rinsed and minced,” but we decided to reconstitute the mushrooms before chopping them. Simply place the dried mushrooms in a bowl of warm water for about 20 minutes, and they’ll plump up nicely. Then finely chop them. 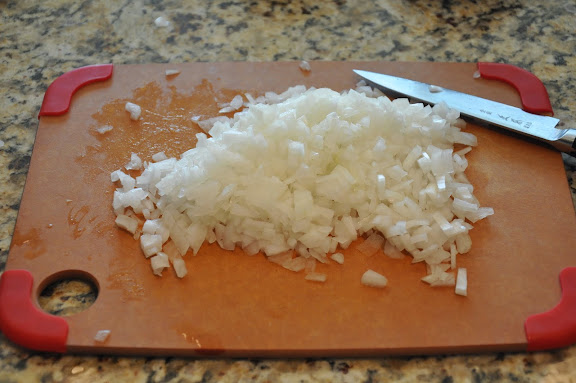 Finely chop an onion. The original recipe calls for microwaving the onions, garlic, oil, tomato paste, porcinis and thyme for about 5 minutes until the onions soften, but we prefer to go old-school and sauté the ingredients in a skillet. 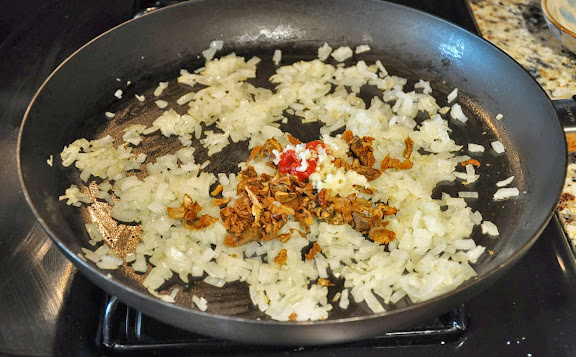 Heat the oil in a nonstick skillet over medium-high heat, add the onion and cook until the onion begins to soften — about 5-7 minutes. Add the porcinis, tomato paste, garlic and thyme and cook for another minute. Transfer the onion mixture to the slow-cooker. 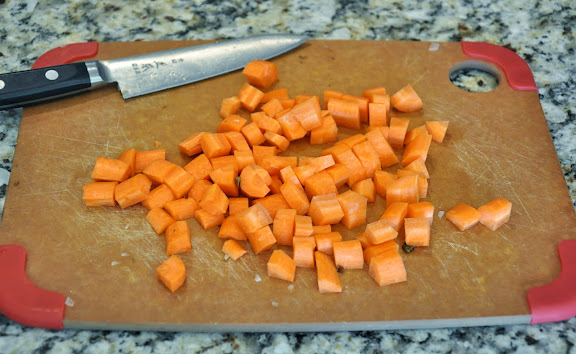 Peel a couple of carrots, chop them into 1/2-inch pieces and add them to the slow-cooker. 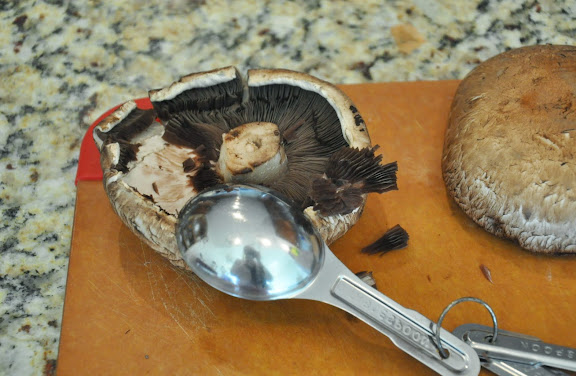 Remove and discard the “gills” (the ribbed dark brown portion underneath) from the portobello mushroom caps. The easiest way to do this is to scrape the gills off with a spoon. Removing the gills will keep the finished soup from looking (and tasting) too dark and muddy. 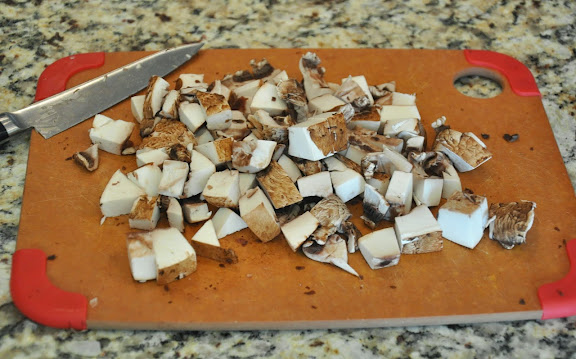 Cut the portobellos into 1/2 inch pieces and add them to the slow-cooker. 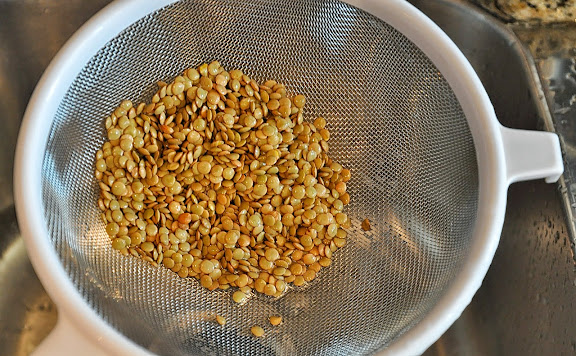 Whenever I see the instruction “picked over and rinsed” for lentils or other legumes, I wonder what it is I should be “picking over.” 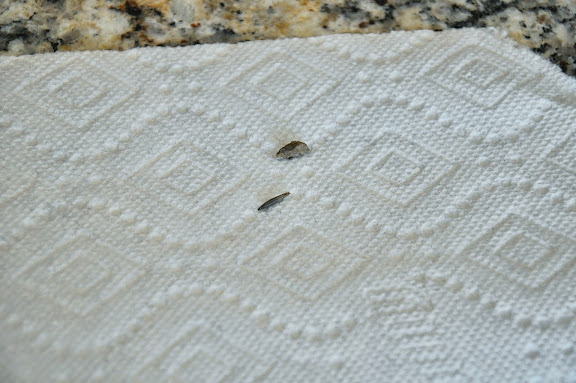 Turns out you should be picking through the lentils looking for non-lentil things, like tiny rocks or pieces of twig. Biting down on that little stone in the finished soup would be a pretty easy way to crack a tooth! 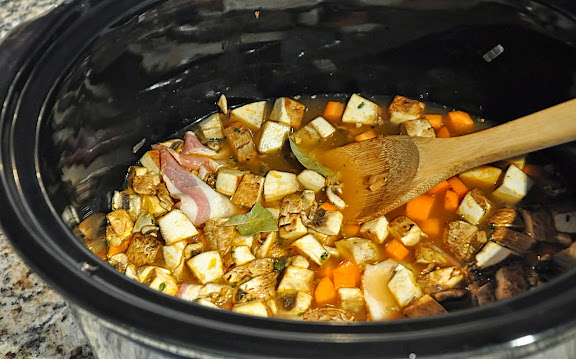 Add the lentils to the slow-cooker, along with a couple slices of bacon, the chicken and vegetable broths and a bay leaf. Stir it all together and cook on low until the lentils are tender — about 9 to 11 hours on low or 5 to 7 hours on high. 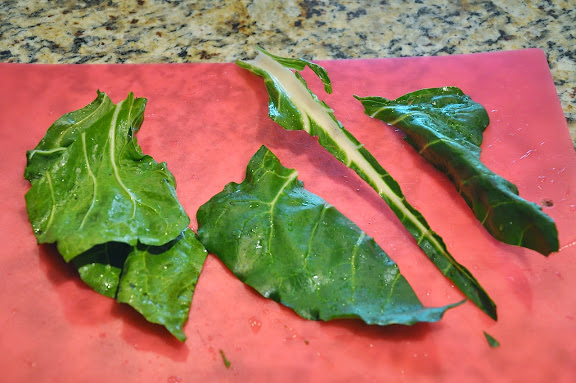 The original recipe calls for Swiss chard as “a hearty green to offer an earthy and colorful contrast to the brown lentils…” Kale is another hearty green that might work pretty well in this soup. With both types of greens, you’ll want to cut the leaves away from the tough stems (and discard the stems.) 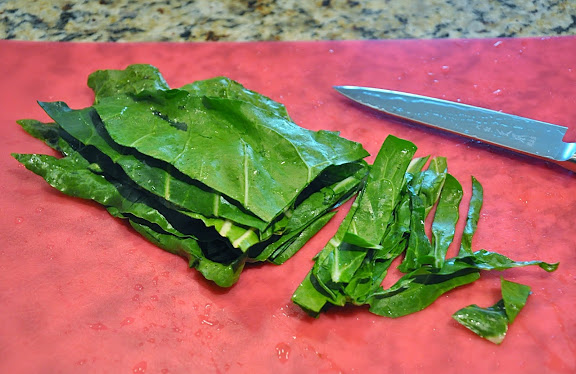 Then cut the leaves into small strips. Add the Swiss Chard to the soup in the slow-cooker for the final 20 to 30 minutes of cooking time. Switch the cooker to high and continue cooking until the chard is tender. When the soup is done, remove and discard the bacon and the bay leaf, then season with salt and pepper to taste. 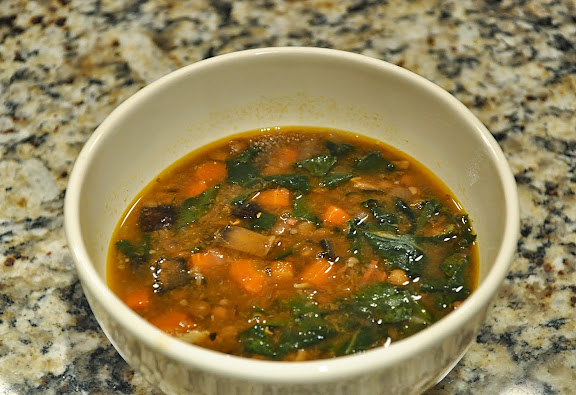 Serve the soup with crusty bread and a drizzle of your favorite hot sauce (ours is Louisiana Hot Sauce), while cozied up in front of whatever TV show you happen to be binge-watching that week. Or maybe that’s just us.