Mark Twain probably said it best: “New Orleans food is as delicious as the less criminal forms of sin.” For us, one of the foods that most epitomizes The Big Easy is crawfish etouffee. Done right, it’s rich in a subtle yet complex way, with a nice amount of heat and a silky, comfort-food texture. And the fact that this Cajun specialty is made with the small crustacean also known as a “mudbug” gives the dish a gritty undertone evocative of Post-Katrina New Orleans. (“Gritty” in the conceptual sense, as in moxie or determination. If yours is literally gritty, then your crawfish probably weren’t cleaned properly and maybe you shouldn’t eat them.) There are a lot of different etouffee recipes out there, but this version seems to be the most authentic homemade interpretation of one of New Orleans’ most sinfully delicious favorites. 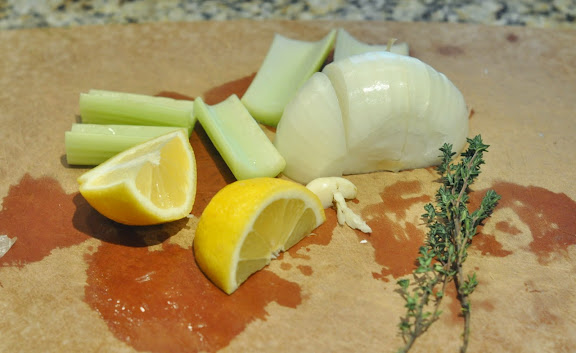 Making crawfish etouffee to celebrate Fat Tuesday calls for making our own shrimp stock. As long as you have shrimp shells and about an hour of extra time, making stock is easy. If not, you can use store-bought fish, vegetable or chicken stock. We planned ahead and cooked a shrimp dish a few nights prior to Fat Tuesday, so that we could save the shells (in the refrigerator) to make stock later. We used this recipe (cut in half), which calls for the following ingredients, in addition to shells from about a pound of large shrimp:  1/2 an onion, 1 stalk celery, 1/2 a lemon, 1 clove garlic, 1 bay leaf, 2 sprigs thyme, 1/2 teaspoon peppercorns and 4 cups water. No need to precisely chop any of the veggies, since you’ll throw them away when the stock is done. Just chop the onion and celery into a few large pieces, cut the lemon half in half and peel the garlic. 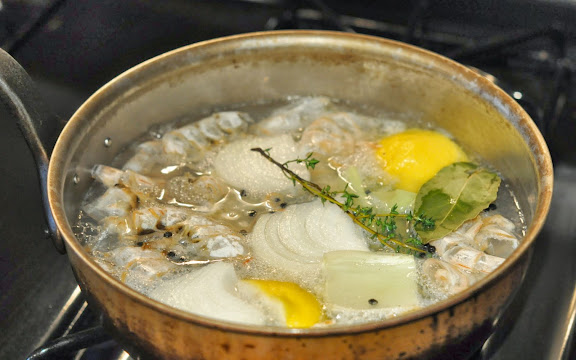 Add all the ingredients to a pot and bring to a boil. Skim off any scum that rises to the surface (we didn’t have any, thank goodness. I’m not sure I would’ve enjoyed seeing shrimp scum rise to the surface, any more than I would’ve liked skimming it off.) 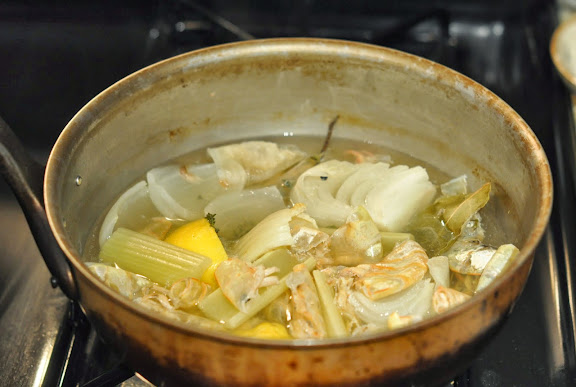 Reduce the heat and simmer the stock, uncovered, for about 45 minutes to an hour. 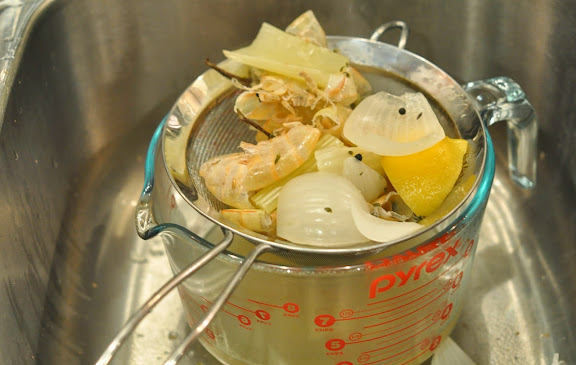 Strain out the solids and you should end up with about 2 cups of stock. Refrigerate the stock until you’re ready to use it in the etouffee. (Or freeze it if you want to use it in another dish some other time.) 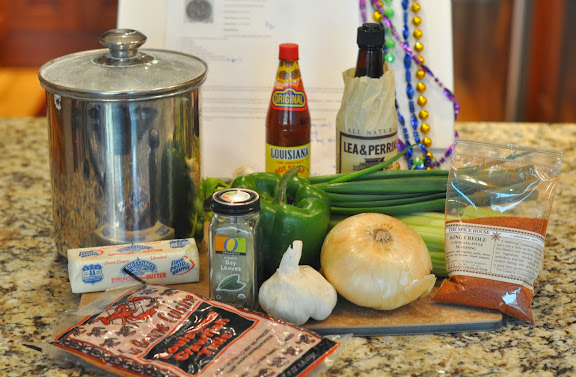 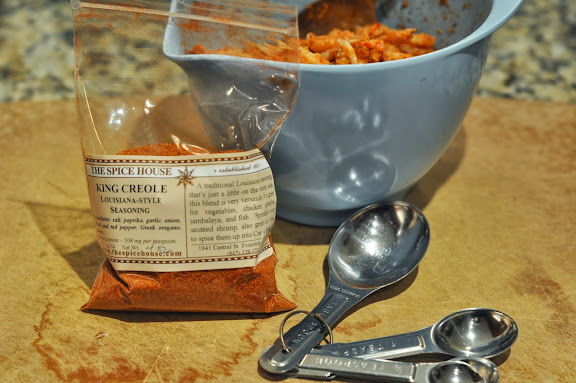 Probably the best crawfish to use in etouffee would be fresh crawfish cooked at a crawfish boil. If you’re lucky enough to have access to in-season mudbugs, you should definitely have a big party to boil them in spicy seasoned water, then save some of the cooked ones for etouffee the next day. Also, you should invite us. If you do not have access to a crawfish party, buy frozen crawfish at the grocery store. We bought a pound of frozen crawfish tails that had already been peeled and cooked, making this dish even easier to execute (but less fun than communal crawfish peeling and eating at a party). Sprinkle about a tablespoon of Creole seasoning (a spice blend made with salt, paprika, garlic, onion, black and red pepper, oregano and thyme) over the crawfish and refrigerate for about an hour before adding to the etouffee. 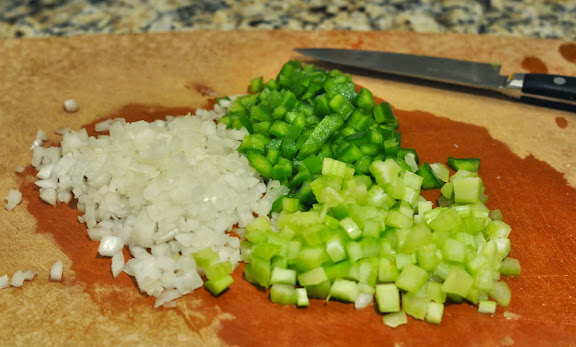 Chop the “holy trinity” of Cajun cooking — onion, celery and green bell pepper — which will be sauteed in another Cajun food essential:  the roux. 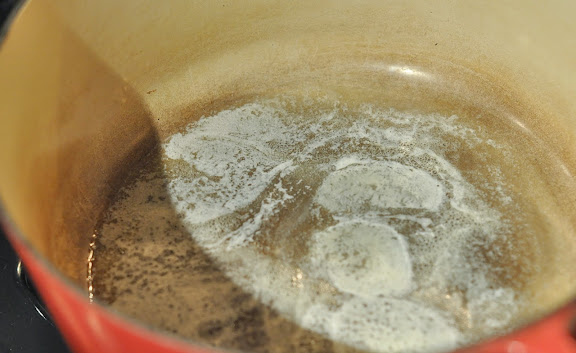 To make the roux, melt the butter in a Dutch oven or other heavy-bottomed pot until it begins to foam. Then add the flour and cook over medium heat, stirring constantly, until the roux turns golden brown. 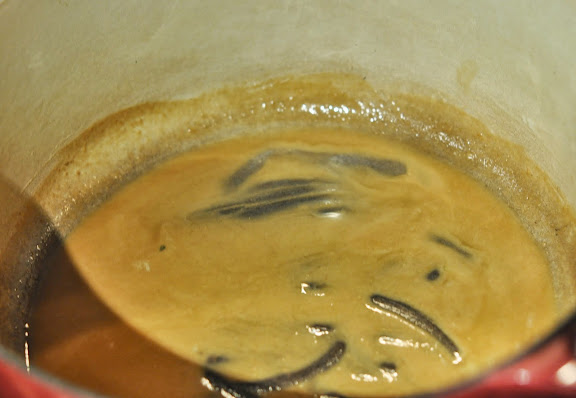 The roux for etouffee is blond — similar to a light caramel color — as opposed to the dark roux used to make gumbo. 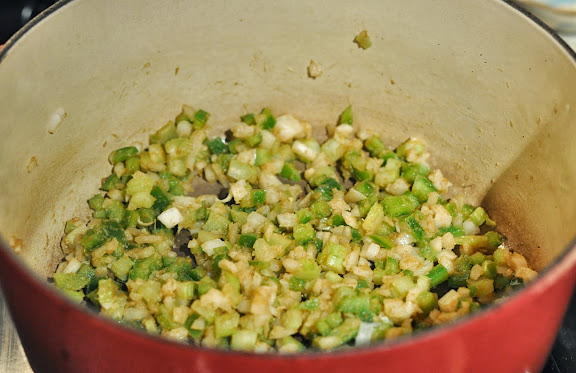 Add the “holy trinity” and a dash of salt and pepper to the roux and cook until the veggies begin to soften — about 5 minutes. 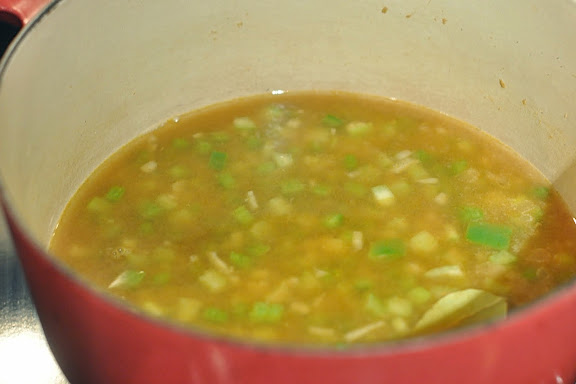 Add the stock, hot sauce, bay leaf and Worcestershire sauce to the pot, turn up the heat and bring the mixture to a slow boil. 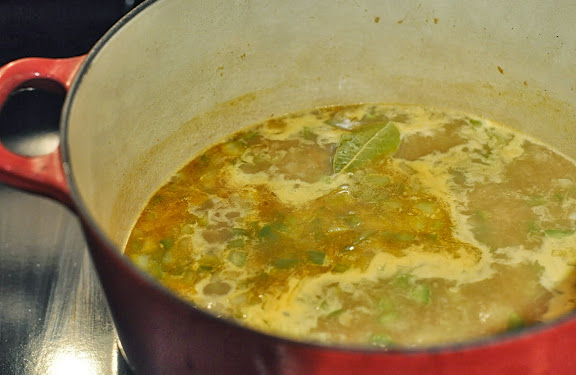 Reduce the heat and simmer, uncovered, until the vegetables are tender and the liquid reduces and thickens — about 25 minutes. 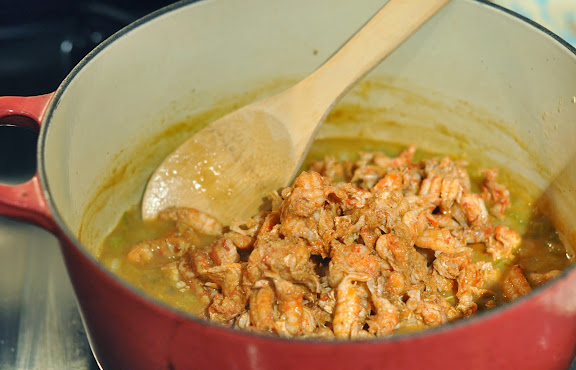 Add the crawfish and simmer until they are heated through — about 3-4 minutes. If you are using uncooked crawfish, you may want to cook them for a few more minutes. 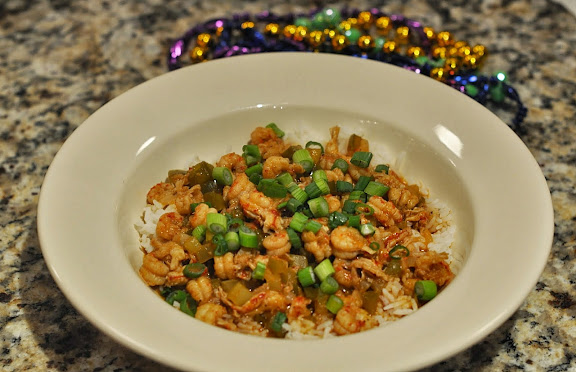