The English translation of this recipe for Braciole di Manza is “Italian beef rolls in tomato sauce.”  Braciole (pronounced “bra-jule,” loosely and inexpertly if you are me) is a dish that Dan orders just about every time we go to one of our all-time favorite Italian restaurants in the town where he grew up.  When researching recipes to attempt to recreate braciole at home, we found that while the cooking method is consistent across nearly all recipes — thinly pounded beef topped with filling ingredients, rolled up and tied, then slowly cooked in a simmering red sauce — the filling components vary widely (other than breadcrumbs and cheese, which are pretty standard), with everything from prosciutto, parsley and rosemary, to spinach and mushrooms, to pine nuts and raisins.  Interestingly, my mom makes a similar style of dish, but with roots in Germany rather than Italy and totally different ingredients.  Her “rollfleisch” as we call it (I found related recipes called “rouladen” online) uses bacon, celery, onion and bell pepper for the filling, then the rolled and tied beef is cooked in gravy (or broth, wine or water.)  For our own, inaugural version of homemade rolled-meat-with-filling-cooked-in-liquid, we went with a basic braciole filled with breadcrumbs, Parmesan, garlic, parsley, oregano and Provolone, cooked in a simple red sauce.  The finished dish was anything but basic or simple, with rich, beefy goodness that complemented and infused the sweetness of the tomato sauce.  We’ll definitely make homemade braciole again, and maybe next time we’ll add prosciutto to the filling for another layer of meaty flavor.  But first, we plan to try our hand at a FoodieLawyer interpretation of rollfleisch.  Even better, we could take this slow-cooked, stuffed and rolled meat thing global, with versions inspired by all different types of cuisine — Mexican, Asian, Greek, Indian, French — so many possibilities! 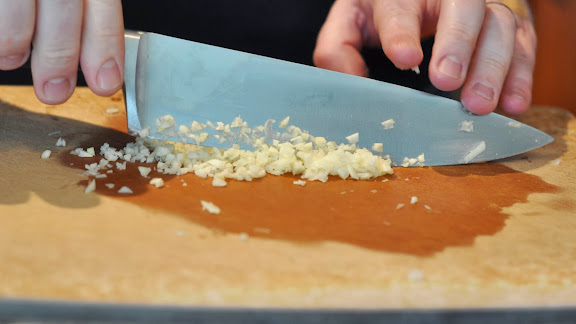 It’s been a while since we’ve featured an action shot of Dan chopping, so here he is mincing garlic for the filling.  You could also use a garlic press to mince the garlic, but sometimes Dan prefers to chop it for bigger (yet still tiny) pieces and stronger garlic flavor. 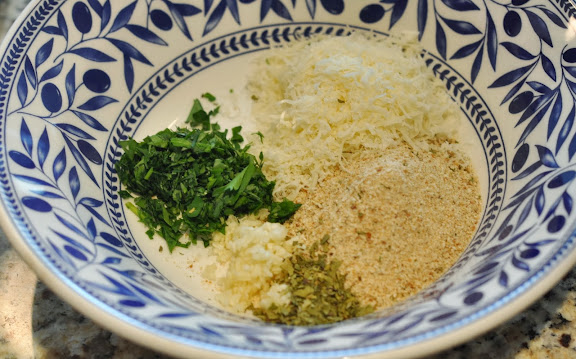 Combine the minced garlic with the remaining filling ingredients:  parsley and oregano (fresh or dried, whichever you have on hand); breadcrumbs (the original recipe called for fresh breadcrumbs soaked in milk but we used store-bought); and grated Parmesan cheese.  We added about a teaspoon of heavy cream to the mixture to help bind it all together. 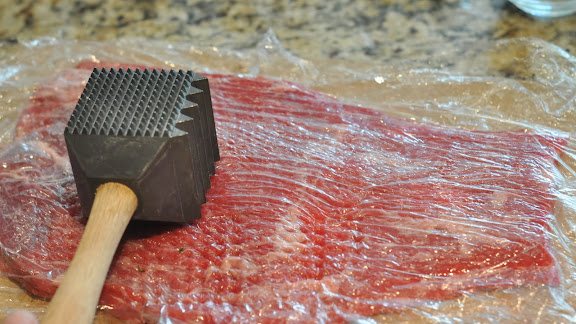 Use a meat tenderizer to pound the flank steak to about 1/4 inch thick.  (It helps to cover the meat with plastic wrap to prevent flying bits.) 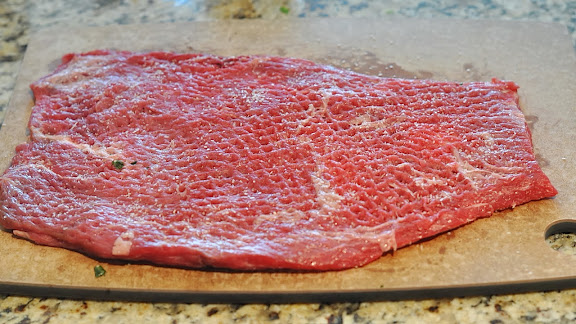 Upon reflection, we wished we had pounded the steak a bit thinner, for a better ratio of filling to meat in the finished beef roll.  Season the beef on both sides with salt & pepper. 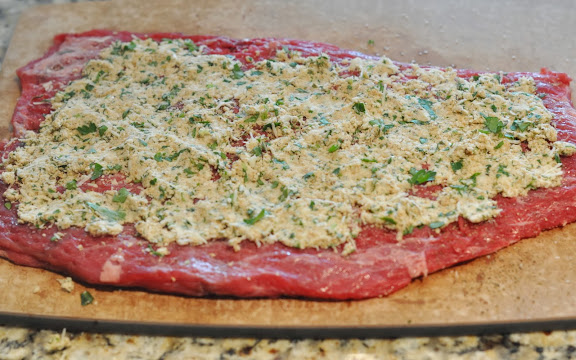 Spread a thin layer of the breadcrumb mixture over the surface of the meat. 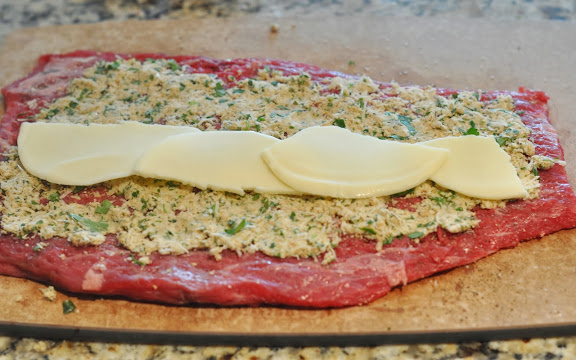 Roll up the meat lengthwise, then tie it with kitchen twine.  Tie the roll securely in several places so that it will stay together as the beef cooks and becomes more and more tender. 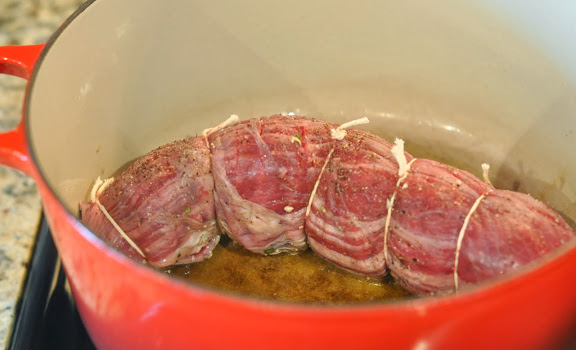 Heat a couple tablespoons of vegetable or canola in a Dutch oven or heavy-bottomed pot over medium-high heat.  Add the beef roll and cook until browned on all sides. 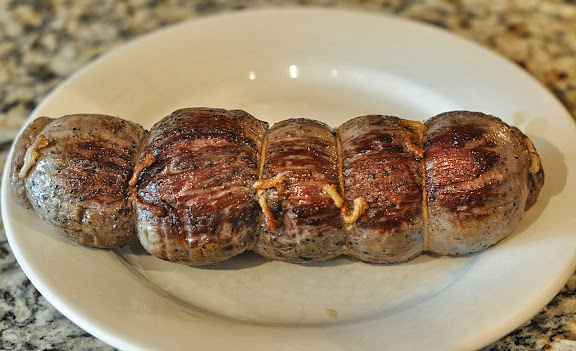 Remove the browned braciole to a plate and set aside. 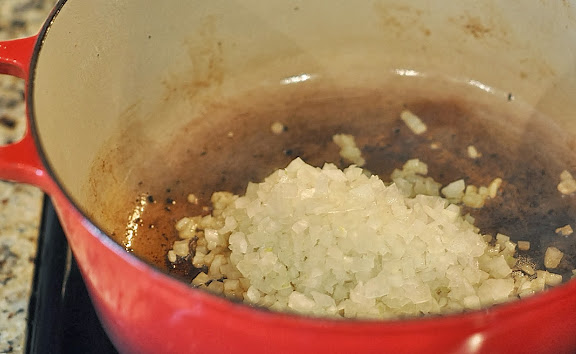 Spoon off and discard any excess oil so there is about a tablespoon left in the Dutch oven.  Add the onion, garlic and a dash of salt and cook until the onion begins to soften — about 5-7 minutes. 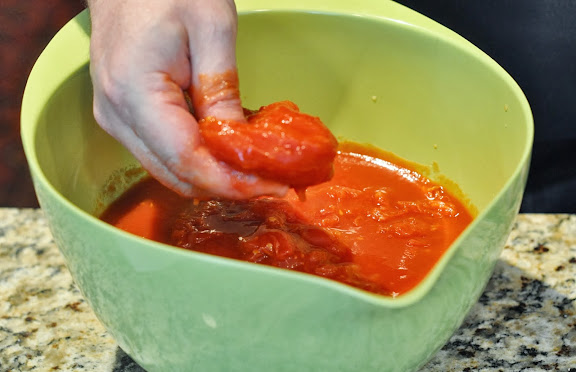 Meanwhile, the recipe calls for a can of whole tomatoes, crushed by hand.  You could also use a can of diced or pre-crushed tomatoes, but doing them by hand will give the sauce a thick consistency that falls right in the happy medium place between pureed and chunky. 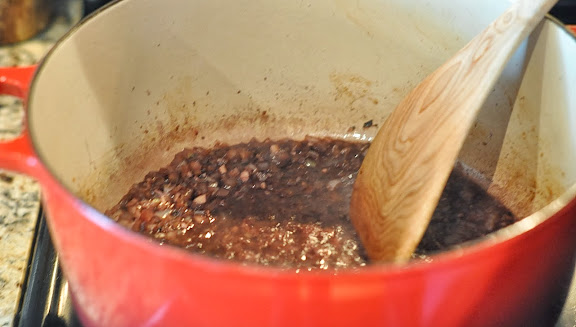 Add red wine to the onions and bring to a simmer while de-glazing any browned bits from the bottom of the pot.  Cook until most of the wine has evaporated — about 3-4 minutes. 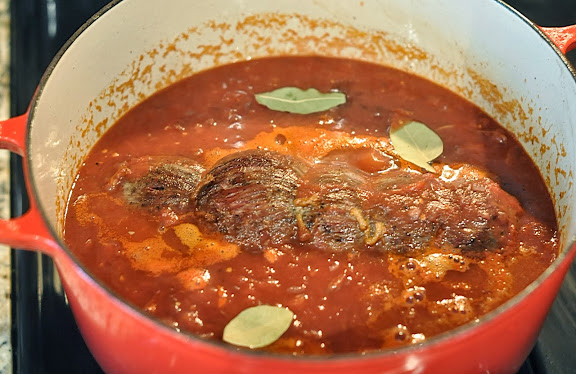 Add the tomatoes, a little salt & pepper, bay leaves and the braciole to the pot.  Bring the sauce to a boil, then reduce the heat to low, partially cover the pot and simmer until the beef is very tender — about 2-3 hours.  Keep an eye on the liquid level and add water as needed to keep the braciole mostly covered as it cooks. 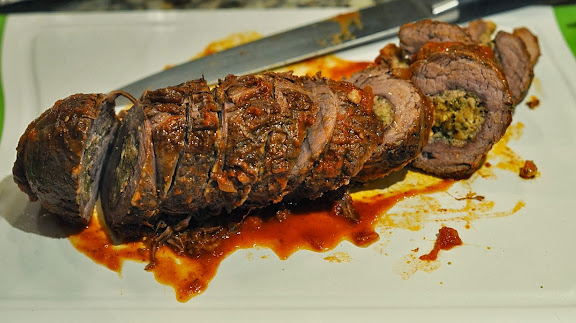 Remove the beef roll to a cutting board and slice into individual portions.  Don’t forget to remove and discard the kitchen twine (and the bay leaves from the sauce!) before serving.  Taste the sauce and add salt & pepper as needed. 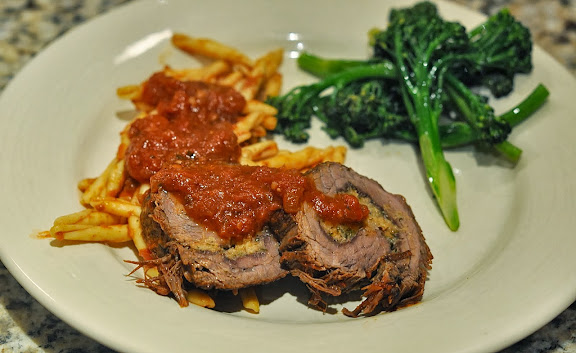 Serve the braciole with pasta (we’re loving this filei pasta shape these days) and extra sauce spooned over top.  This Italian version of stuffed rolled meat gets a hearty “Bravissimo” from us.  We’ll let you know how the German version turns out, as well as the rest of the beef roll world tour…