Recently we  traveled to Altoona, PA for a weekend visit with Dan’s mom.  No trip to Altoona is complete without a dinner at Lena’s Cafe, one of our favorite Italian restaurants in the world.  The atmosphere of this family-owned eatery is best described as friendly-causal — wood paneling on the walls, possibly the original old-school restaurant tables and chairs, and some the nicest restaurant staff we’ve ever encountered.  Our Lena’s dining experiences are probably also enhanced by the fact that someone almost always recognizes Danny (how he is known in Altoona) and comes over to say hello.  But hands-down, the very best thing about Lena’s is the red sauce — the owner’s mother’s special recipe.  We’ve never had anything like it anywhere else.  Dan’s red sauce recipe is really good, but it’s no Lena’s. 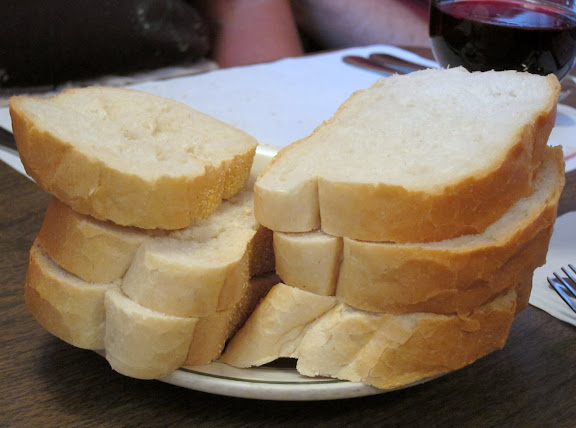 Even the bread there is better than other restaurant bread. 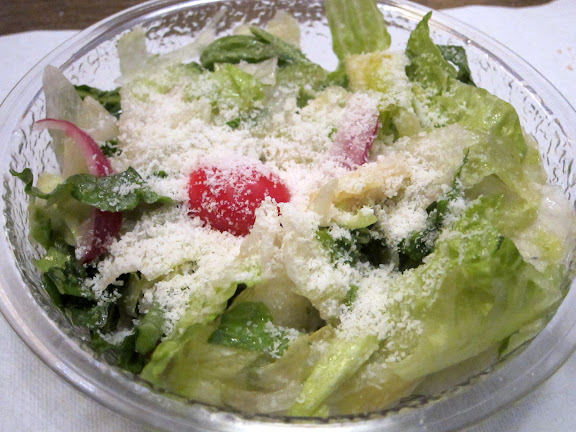 Lena’s house salad is simple but delicious — mixed lettuce, tomato, red onion and a light Italian dressing.  But the key ingredient is the cheese.  It is a finely grated parmesan (we think) cheese that you have to specially request.  Then put it on everything you order and resist the temptation to just eat it by the spoonful. 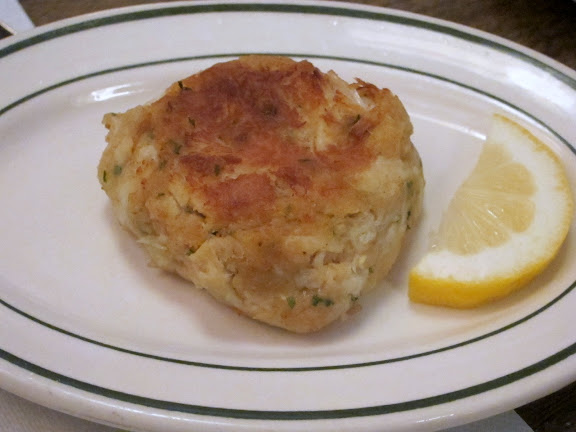 Aside from the red sauce, the second best thing at Lena’s may be the crab cakes.  You might not expect to find the best crab cake you’ve ever eaten at an Italian cafe in central PA, but there it is.  We’ve had crab cakes in a lot of different places, but Lena’s is still the very best.  Just the right amount of crab to breading ratio, a little crispy on the outside, and seasoned perfectly.  They don’t even serve it with a sauce because it is so good on its own.  On this night, we asked for a side of cocktail sauce.  While we were waiting, we had “just a bite to taste” and before we knew it, we had finished eating the entire crab cake before they could bring us the sauce. 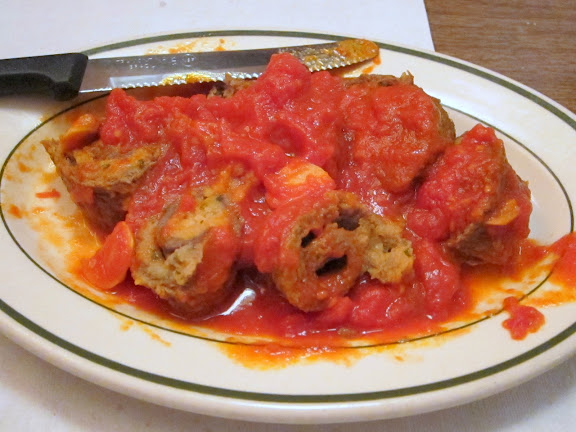 Another must-order menu item that is suitable for sharing with the entire table is bracciole (pronounced “bruh-jhule”).  Bracciole is a beef dish, with the meat pounded flat and rolled, then slowly cooked in the red sauce.  It can be hard to find in other Italian restaurants, but Lena’s always has it. 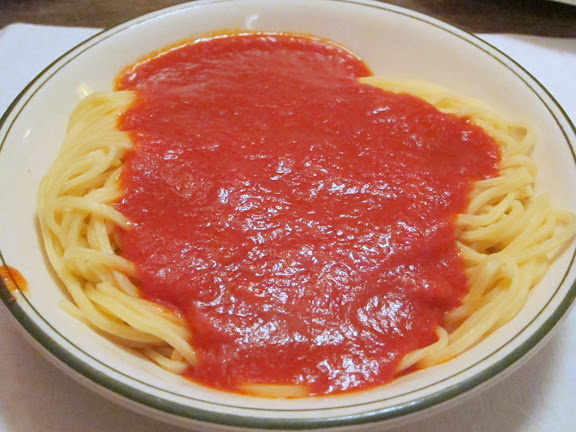 With your entree at Lena’s, you have the option of ordering a side of the homemade noodles.  We recommend you do this if you really like fresh, delicious pasta.  That’s all it is — homemade pasta with Lena’s famous red sauce.   Kelly could go to Lena’s and only eat this.  And maybe a crab cake for dessert. 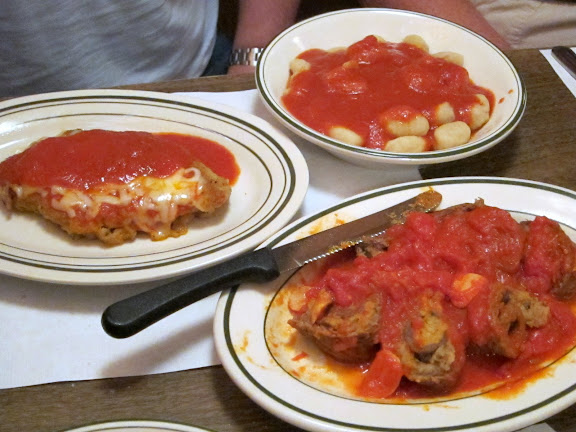 When we go to Lena’s, we order a multitude of dishes because everything is so good, and we like to have a sample of everything.  Now that we think about it, we order food that way at a lot of places.  We like to eat.  Pictured above:  bracciole, veal parmesan, and gnocchi. 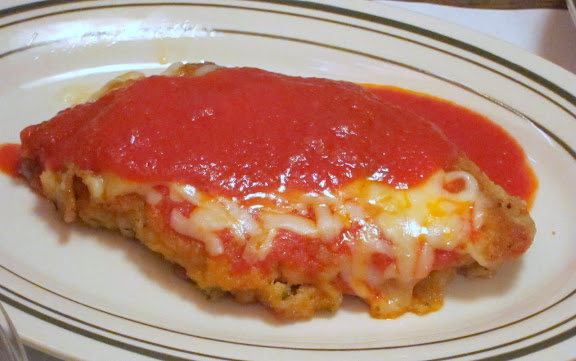 Another Lena’s favorite is the veal parmesan.  It has just the right amount of everything good — baby cow (sorry PETA, it’s delicious), breading, cheese and sauce.  Perfection. 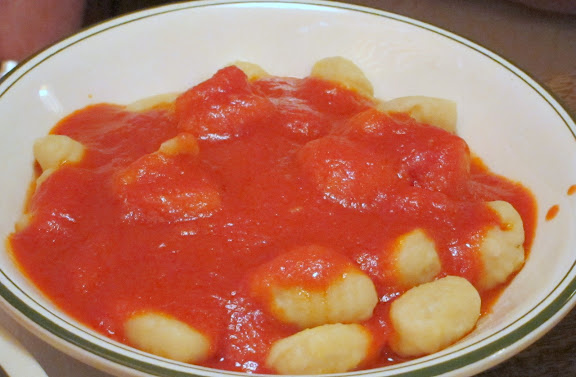 Instead of homemade noodles as a side, Lena’s also offers really good gnocchi.  Dan loves it. 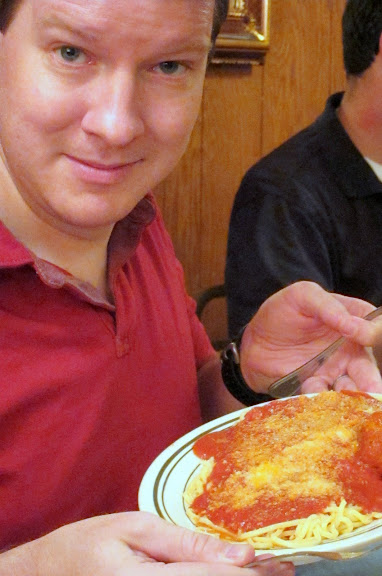 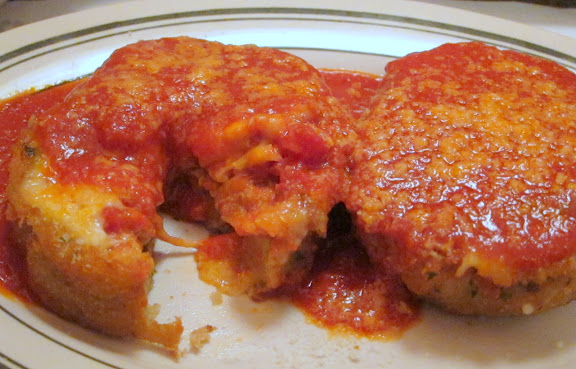 The night we went to Lena’s, they had a seasonal, off-menu item that was delicious — eggplant parmesan.  Despite the eggplant thickness, breading and cheese, it still somehow tasted light and healthy.  So good. 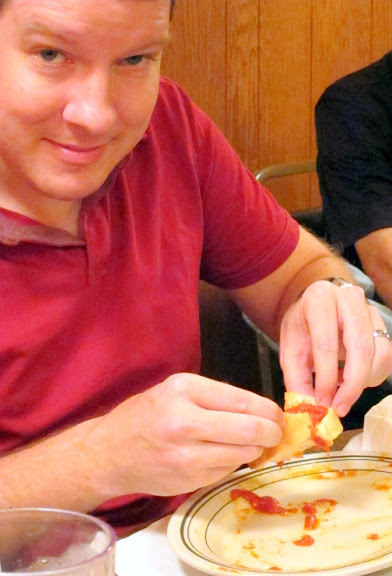 Sean is almost done, but no red sauce can go to waste.  Cleaning up your plate with the bread is a must at Lena’s. 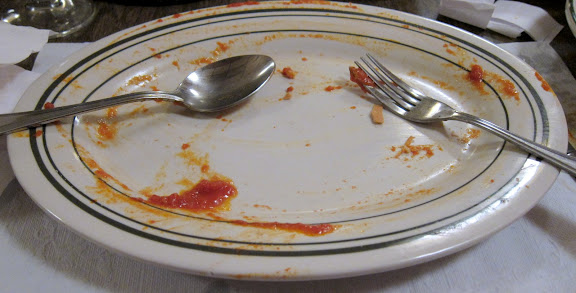