Barbecued chicken is one of those classic summer dishes that conjures images of picnic-table-meals with cold potato and macaroni side salads and thick watermelon slices for dessert.  Bonus points if you are lucky to live somewhere with easy access to fresh, picked-that-morning corn on the cob.  Dan grew up in one of those places and fondly remembers corn on the cob and BBQ chicken dinners from childhood summers, not necessarily because of the chicken itself, but because his dad did the barbecuing while he and his brothers got up to whatever summer shenanigans 3 boys within a couple years of each other’s ages are wont to do.  Although his family’s version of BBQ chicken is not one he’s ever made as an adult (boiled until fully cooked — took no chances on raw poultry in those days! — then dipped in BBQ sauce diluted with a little beer and grilled over direct heat until the sauce began to caramelize), the memories of summers as a kid are happy and good.  And now, with this recipe for “foolproof barbecued chicken” from Cook’s Illustrated, he can reminisce on those days while also enjoying flavorful, perfectly-cooked, juicy chicken grilled with a homemade BBQ sauce that has just the right tangy / spicy / sweet ratio.  If only we had some farm-fresh, Pennsylvania corn to go with it! 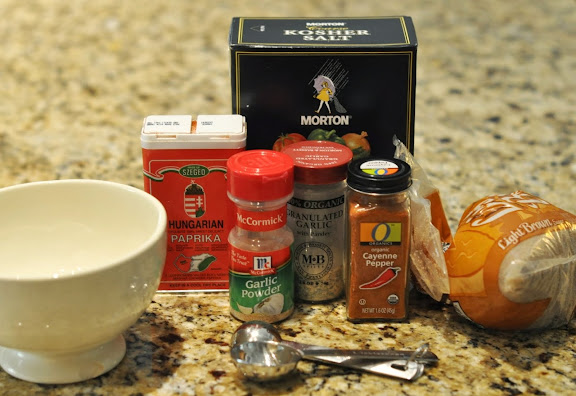 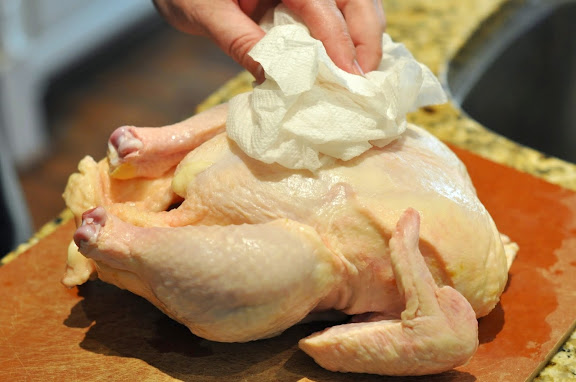 The original recipe calls for 6 pounds of bone-in chicken pieces (split breasts and/or leg quarters), but we used a whole chicken (cut into pieces) so we needed a bit more of the rub.  You can use whatever amount and cut of chicken you prefer, although bone-in and skin-on chicken will work best for this recipe. 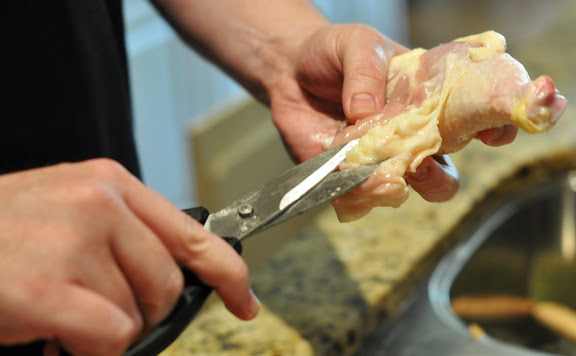 Trim the visible fat from the chicken pieces (but leave the skin on.) 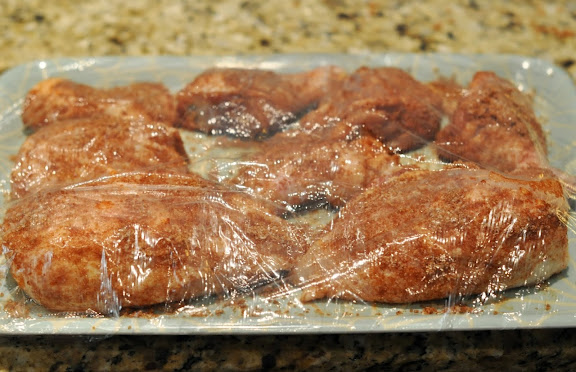 Generously sprinkle the rub over both sides of all the chicken pieces and place them on a tray or cookie sheet.  Cover with plastic wrap and refrigerate the chicken for at least 6 hours or as long as 24 hours.  The rub adds a lot of flavor, and the salt in the rub acts similar to the way it does in a brine by helping to prevent the chicken from drying out while it cooks. 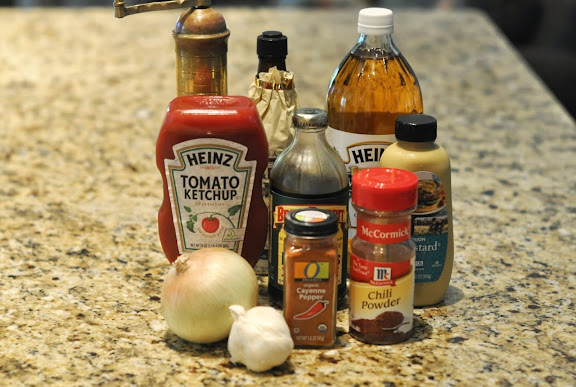 Next, gather the BBQ sauce ingredients:  1 cup ketchup, 5 tablespoons molasses, 3 tablespoons cider vinegar, 2 tablespoons Worcestershire sauce, 2 tablespoons Dijon mustard, 1/4 teaspoon pepper, 2 tablespoons vegetable or canola oil, 1/3 cup grated onion, 1 minced clove garlic, 1 teaspoon chili powder and 1/4 teaspoon cayenne pepper.  You will likely have more sauce than you need for the chicken, but it will keep in the refrigerator for about a week.  And you can use it with leftover chicken (if you have any) to make this BBQ chicken salad.  Of course, you could also use bottled BBQ sauce, and if you have a favorite, you should.  But this homemade version is easy to make and tasted noticeably better than bottled versions we’ve tried. 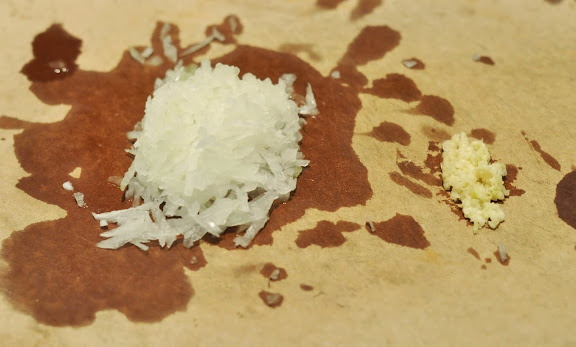 We grated the onion with the large hole side of our cheese grater.  We’re not exactly sure why the recipe calls for grating the onion instead of chopping it — thinner pieces that sort of melt away when it cooks maybe, since we didn’t notice any chunks of onion in the finished sauce. 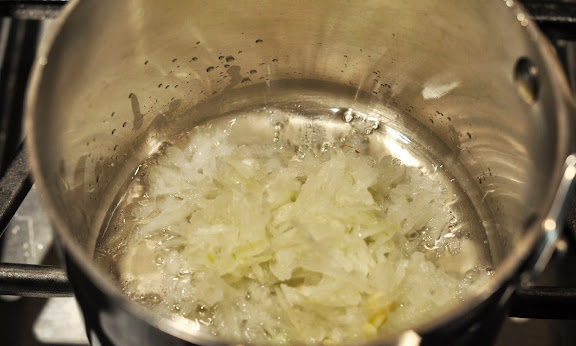 Heat the oil in a saucepan over medium heat, add the onion and garlic and cook until the onion softens — about 3-4 minutes. 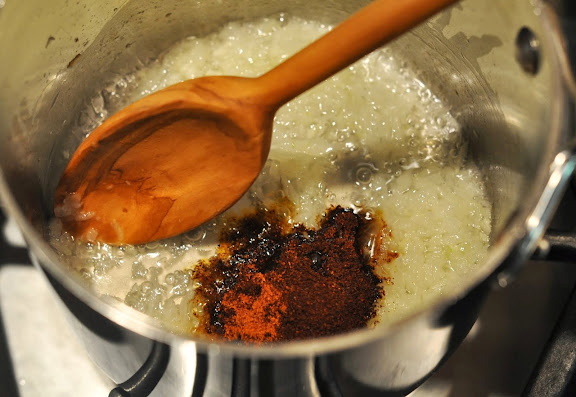 Add the chili powder and cayenne pepper and cook until fragrant — about 30 seconds. 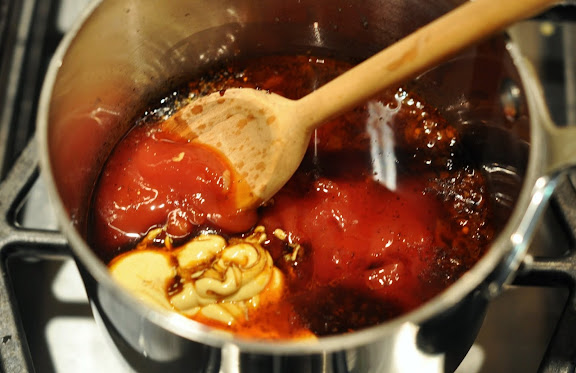 Off the heat, stir in the ketchup, molasses, vinegar, Worcestershire, Dijon and pepper. 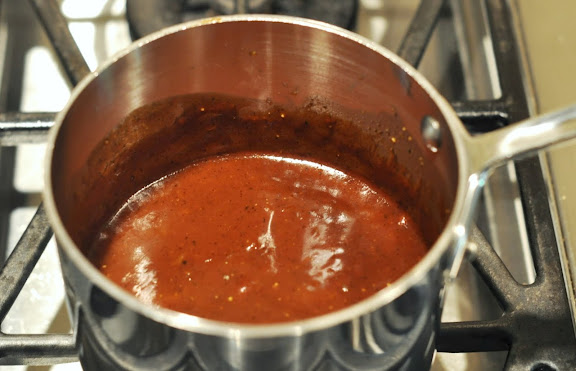 Bring the mixture to a boil, then reduce the heat to medium-low and simmer the sauce for about 5 minutes.  Depending on how much chicken you have, set aside 2/3 to 1 cup of sauce for basting and reserve the rest for passing at the (picnic) table with the finished chicken. 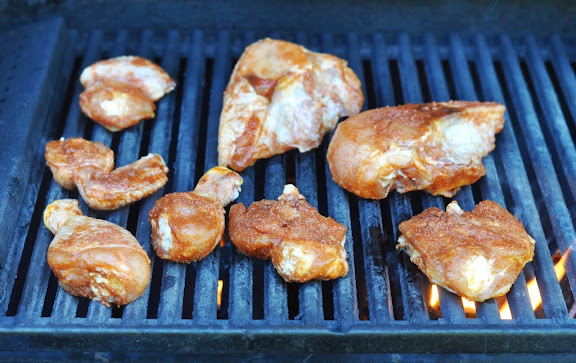 Clean and oil the grill grates and heat the primary burners of the grill to medium-high (around 325-350 degrees.)  Place the chicken, skin-side down, on the grill and cook until it begins to blister and brown — 2 to 5 minutes.  Then turn the chicken pieces and cook until the second side is browned — about 4 to 6 minutes. 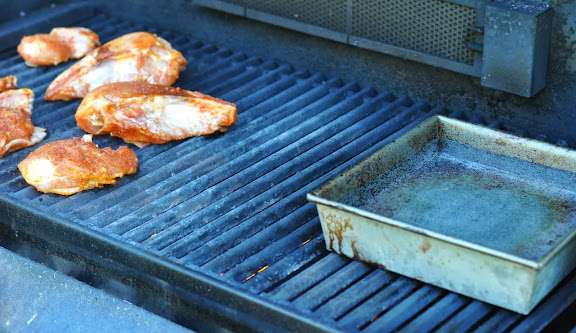 The original recipe calls for placing a pan filled with 1 1/2 cups of water on the grill, opposite the primary burners you are using, in order to help keep the heat low and even.  We’re not so sure it made much of a difference, but it certainly didn’t hurt anything and we’re always looking for new cooking tips and tricks to try. 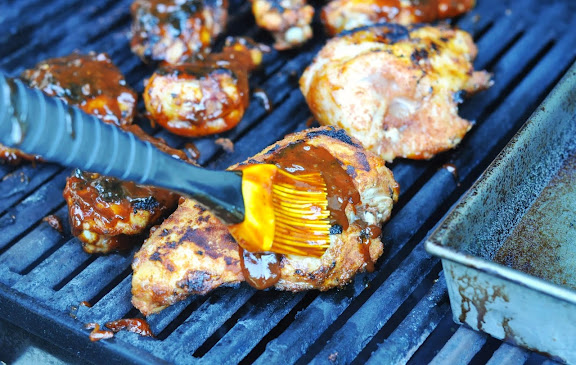 Move the chicken to indirect heat on the grill and brush both sides with a light coating of sauce (save some to baste the chicken again later.)  If you’re grilling both white and dark meat, place the dark meat pieces closer to the hotter portion of the grill since they take longer to cook.  Cover the grill and cook the chicken for about 25 minutes. 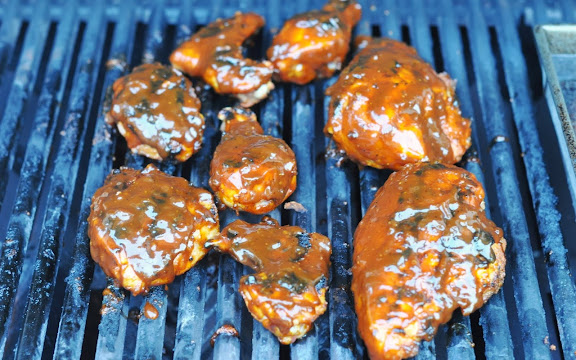 Baste the chicken again on both sides with the sauce and continue to cook until the chicken is done (around 160 degrees for breasts and 175 degrees for leg/thigh pieces) — about 20 to 25 more minutes.  Of course, some people may prefer the more  caramelized style of barbecued chicken, and we by no means disparage that choice!  But we really like how this method of basting the chicken while grilling over indirect heat keeps the meat juicy and the sauce saucy.  And we love being able to improve the flavors and technique of a recipe, while preserving the cherished memories conjured by the original dish.