If you frequent sushi restaurants, you’ve probably eaten a fair amount of edamame, where it is often served as an appetizer:  still in the pod, steaming hot and sprinkled with kosher salt.  Sushi places must keep giant vats of edamame ready for service each day because it almost always comes to your table about 2 minutes after you order it (my favorite kind of appetizer.)  If you’ve never had it, edamame refers to green (as in not yet ripe) soybeans that have a mild, slightly nutty flavor that belies their high nutritional value.  These little beans are packed with fiber, protein, iron and vitamins A and C.  Any food this good for you ought to be consumed more often than the occasional sushi outing.  So we found and adapted this recipe, for a fresh and tangy side dish that pairs especially well with most Asian main courses. 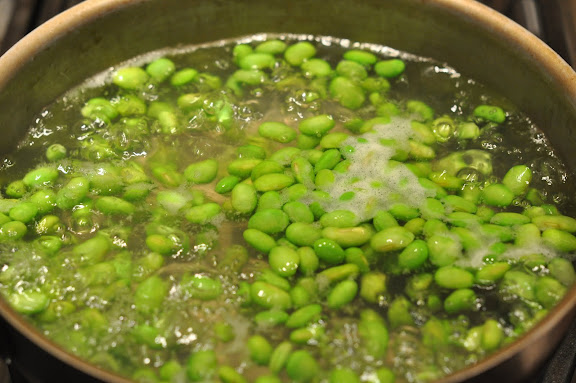 You can find edamame in the frozen vegetables section of the grocery store.  For this recipe, you’ll want to get the pre-shelled edamame, but a lot of stores also sell it in the pods if you’re ever in the mood for a Japanese-style appetizer at home.  Bring a pot of salted water to a boil, add the frozen edamame, return the water to a boil and cook until tender — about 3 minutes.  Drain the edamame, rinse under cold water and sprinkle with a little kosher salt.  Chill the edamame in the fridge while you prepare the rest of the salad ingredients. 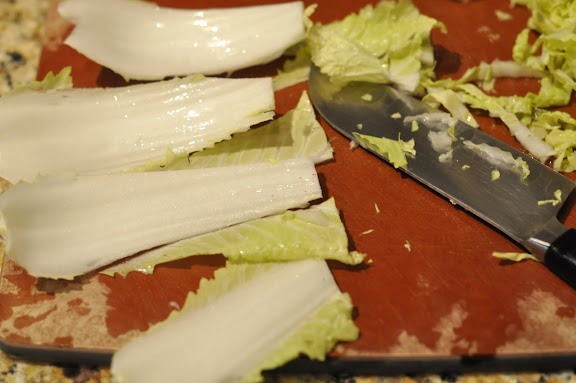 The original recipe called for 1 cup of chopped Napa cabbage, but we used about 3-4 cups because we like the flavor and texture.  Chop the cabbage leaves into thin slices, leaving out the thick white rib portions, which can be bitter. 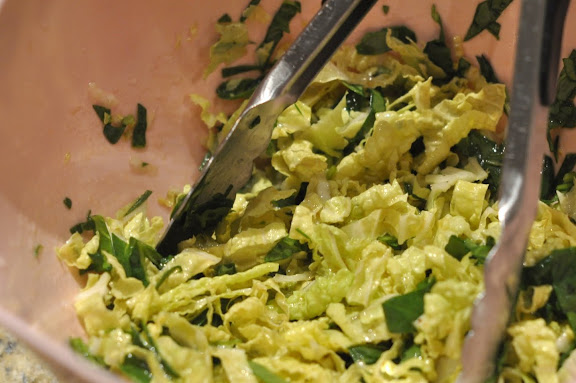 We added about 2 cups of chopped spinach to the salad, instead of the chopped bok choy in the original recipe, since our store didn’t have any bok choy and we pretty much always have fresh spinach in our fridge.  Combine rice wine vinegar, sesame oil and salt, pour the mixture over the cabbage and spinach and toss.  Allow the salad to sit at room temperature for about 20 minutes.  (The original recipe says the cabbage should be slightly wilted after 20 minutes, but if ours was, we didn’t really notice.  Upon reflection, this waiting period may not be totally necessary.  So don’t stress if you don’t have the extra time.) 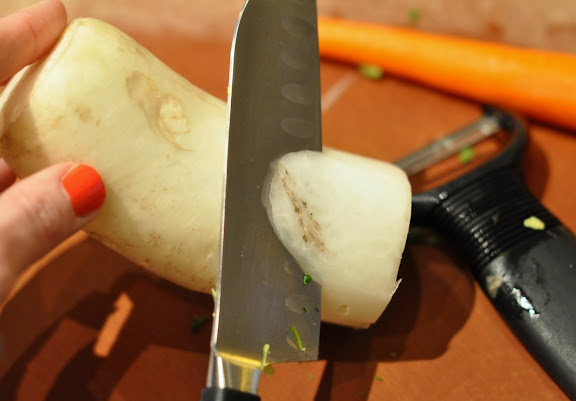 Peel the carrot and daikon radish.  If you’re not familiar with daikon, it doesn’t look anything like round red radishes with which we are most familiar.  Daikon looks more like a turnip or a gigantic mutant white carrot and has a much milder radish flavor than the red ones.  After peeling the daikon, cut out any dark spots. 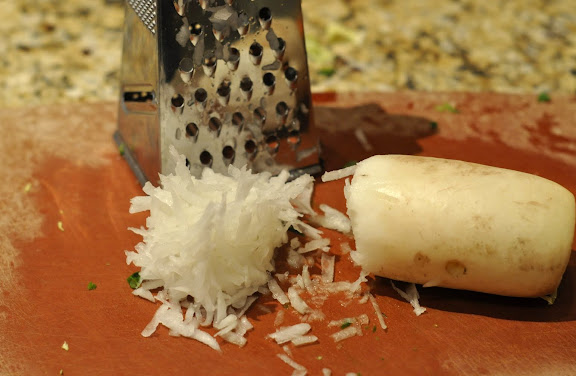 Shred the daikon and the carrot using the large hole side of a cheese grater.  The recipe only calls for 1/2 cup of shredded daikon, so you should have plenty left over to make the daikon/carrot garnish for banh mi sandwiches. 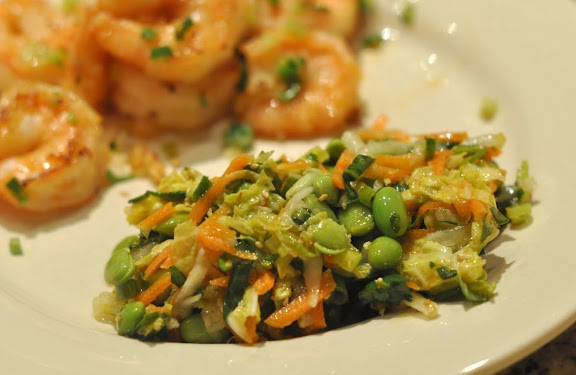 Add the daikon, carrot and edamame to the cabbage mixture, toss and refrigerate for about an hour to allow the flavors to come together.  Garnish with sesame seeds, chopped green onion (green parts) and chopped cilantro and serve.  We served ours with a Chinese-style salt & pepper shrimp dish and loved how the fresh flavors and crunch of the salad contrasted with the plump, salty and spicy shrimp.