We typically don’t eat Indian food.  Dan has a love/hate relationship with the curry powder used in a lot of Indian dishes (he loves it but it hates him, gastronomically-speaking), and I haven’t ever been all that intrigued by trying much Indian cuisine, so it’s never really been on our radar.  Until now.  Several months ago, we had dinner at Samar, a tapas (small plates) restaurant that serves food inspired by the cuisine in Spain, India and the Eastern Mediterranean.  It was the perfect opportunity to try little portions of new-to-us dishes without having to commit to an entire meal that we may or may not like (and may or may not like us back.)  One of the small plates we tried that night was “tandoori chicken butter masala.”   We liked it a lot (it liked us just fine too), and it inspired us to try making something similar at home.  We’re not really sure what the difference is between tandoori chicken and chicken tikka (some sources say tandoori involves a whole chicken or chicken parts, while tikka refers to smaller bits of chicken), but we found a recipe for chicken tikka masala that sounded good, and we adapted it into a dish that we love even better than the one we had at Samar.  It’s easy to make, although it takes some time since the chicken needs to marinate in the yogurt-based marinade for about an hour, then the chicken simmers for about half an hour in the tomato-based sauce.  But the final dish is worth the effort, with complex spices and flavors that you can easily adjust to suit your own preferences (add more cayenne and/or another serrano pepper if you like it more spicy, or increase the amount of cinnamon, sugar and/or garam masala if you prefer a more warm/sweet flavor.)  We’re happy to report a love/love relationship with this Indian dish and we’re so glad we tried it. 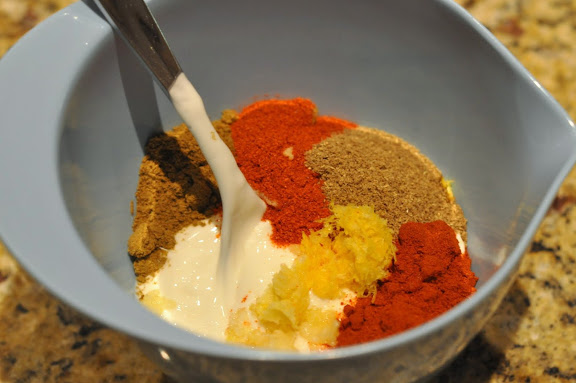 For the marinade, combine yogurt, smoked paprika (regular paprika will work, but the smoked kind adds a nice — you guessed it — smoky flavor), ground coriander, ground cumin, cayenne pepper, lemon zest, minced garlic and grated ginger.  The original recipe also calls for 1/2 teaspoon of cinnamon in the marinade, but we’re not big fans of cinnamon so we didn’t use it. 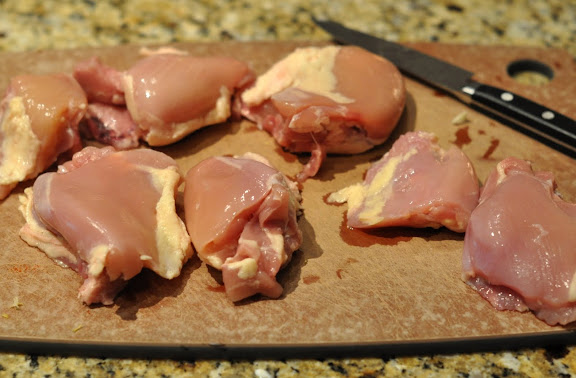 The original recipe calls for a whole chicken, cut into 10 pieces (so perhaps this would more accurately be called chicken tandoori?), but we used chicken thighs instead.  Either boneless or bone-in thighs will work, but boneless will be easier to eat when you enjoy the finished dish without having to worry about cutting the meat off the bone. 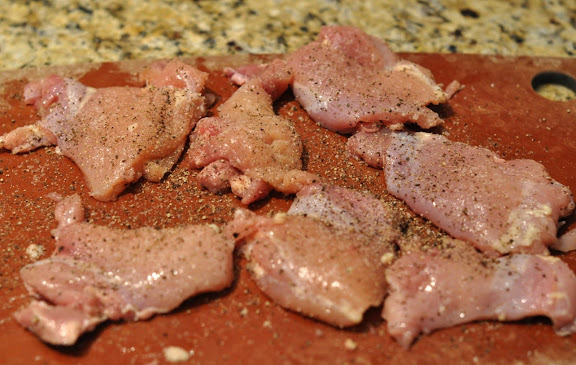 Trim off the fat and season the chicken on both sides with salt and pepper. 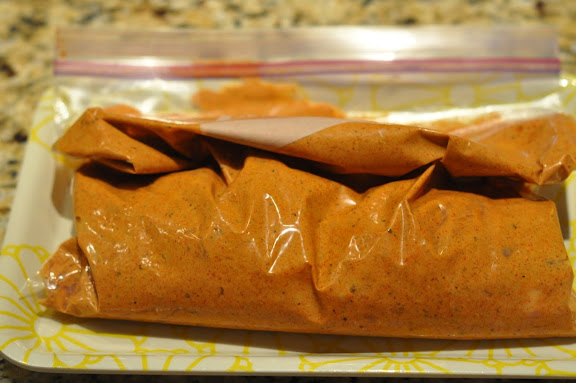 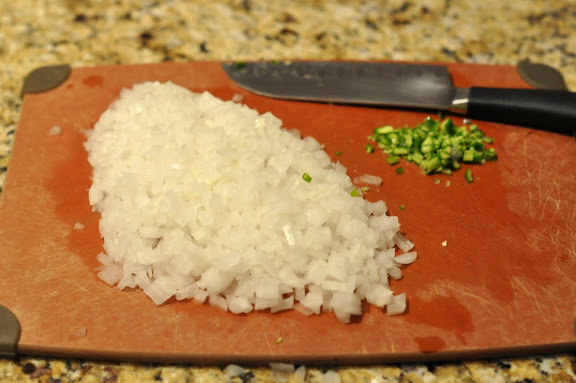 Prepare the ingredients for the sauce (grouping them in the order in which they get added to the sauce decreases the chances of forgetting to add an ingredient.  If you read this blog much, you know I speak from experience on this issue.)  Chop the onion and the de-seeded serrano pepper (a jalapeno would also work.) 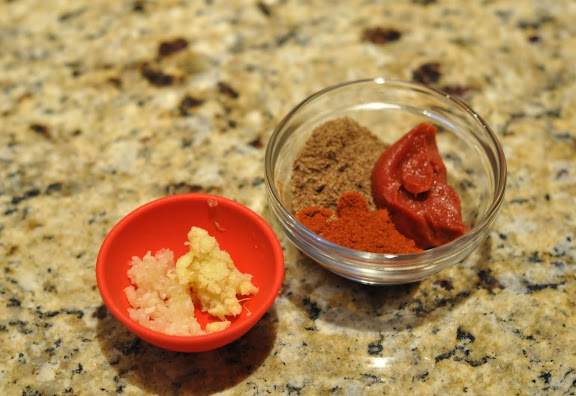 Mince the garlic and grate the ginger, then measure out the spices (smoked paprika, garam masala, sugar and tomato paste.)  Not pictured — the opened can of fire-roasted diced tomatoes (we’ve tried this dish with both fire-roasted and regular tomatoes and the version with fire-roasted ones was better), with a tablespoon of red wine vinegar added to it. 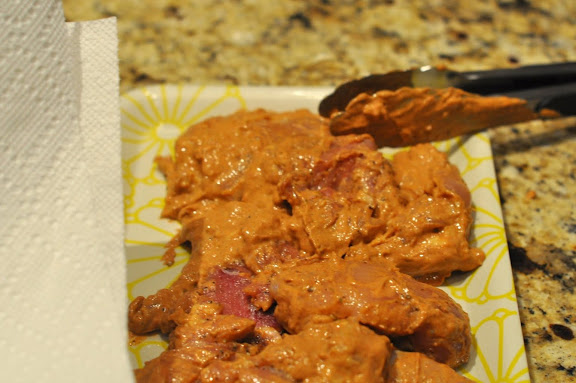 Take the marinated chicken out of the plastic bag and attempt to wipe off the excess marinade with paper towels.  Don’t worry about getting all the marinade off — the yogurt makes it thick and goopy (which also makes for a more delicious sauce when the excess marinade caramelizes in the bottom of the pot while you brown the chicken.) 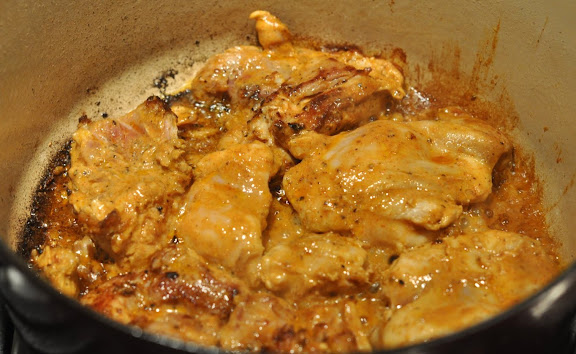 Heat the vegetable or canola oil over medium-high heat in a large pot or Dutch oven, then add the chicken and brown it on both sides — about 6-8 minutes total. 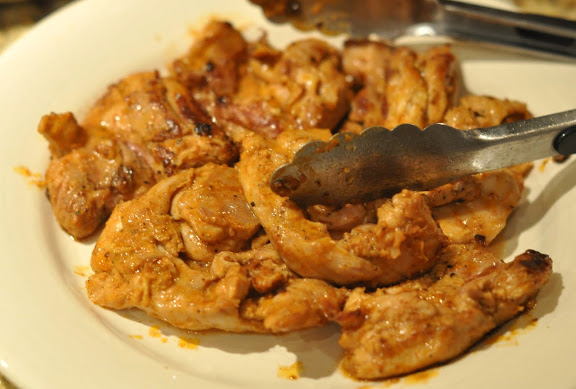 Remove the browned chicken to a plate. 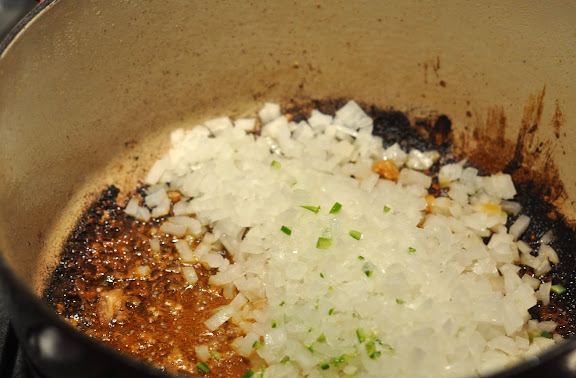 Add the onions and serrano pepper with a dash of salt to the Dutch oven (if there is a lot of rendered fat from the chicken, you should use a big spoon to remove all but about 2 tablespoons of it) and cook until they begin to soften — about 5-6 minutes. 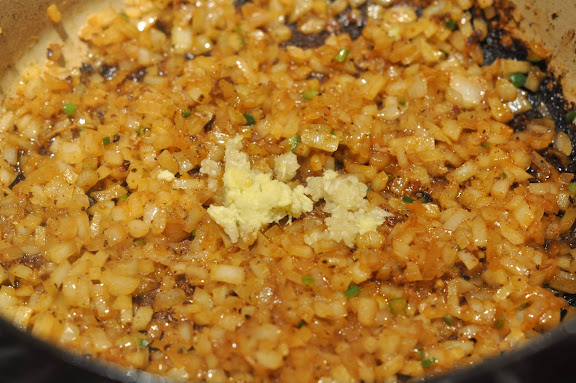 Add the garlic and ginger and cook until fragrant — about 30 seconds. 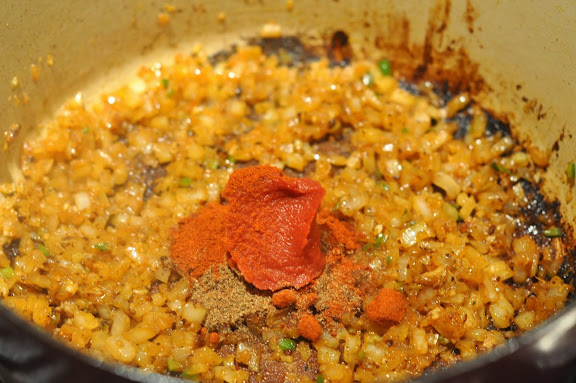 Add the tomato paste, paprika, sugar and garam masala and cook to toast the spices — about 2-3 minutes. 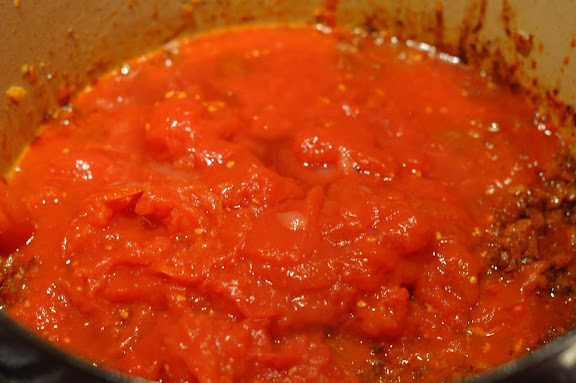 Add the tomatoes (with their juices) and red wine vinegar to the Dutch oven, and use the liquid from the tomatoes to de-glaze the bottom of the pot (use a wooden spoon to scrape up the caramelized and brown bits from the bottom and stir it all together.) 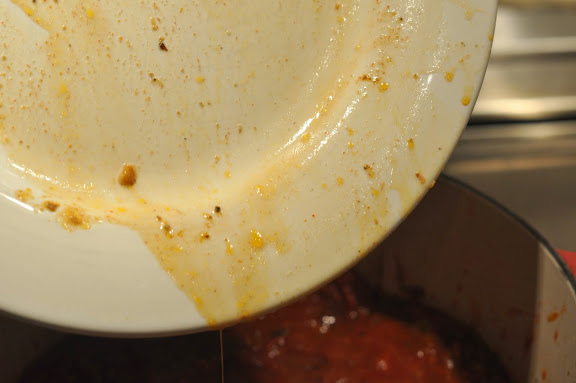 Return the chicken (and any juices that accumulated on the plate) to the Dutch oven. 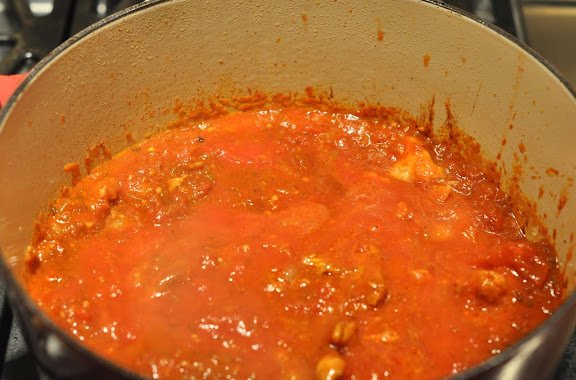 Turn up the heat until the sauce simmers, then cook over medium heat (low simmer) until the chicken is cooked through and tender — about 25-30 minutes. 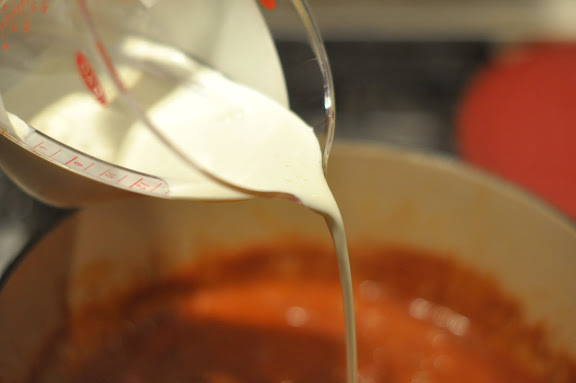 Stir in the heavy cream and cook for another couple of minutes.  Taste the sauce and add salt and pepper as needed. 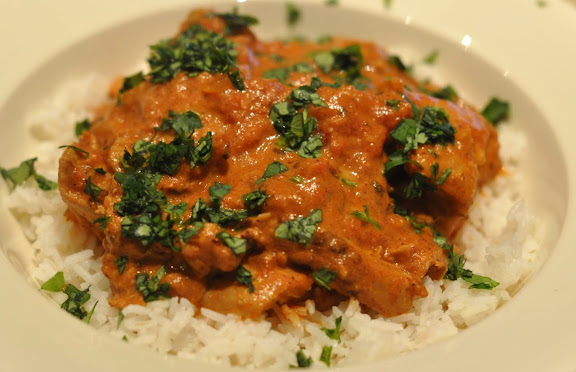 Serve the chicken and sauce over rice and garnish with chopped cilantro.  Sure, it would be a lot easier to dine at your favorite Indian restaurant or order Indian food for take-out or delivery, but it’s pretty satisfying to make your own homemade version that tastes just as good (if not better.)  And if you’ve never had Indian food, this is a good introductory dish to see if you like it.  (Hopefully it likes you too.  I’ll stop now.)