The Steelers took on the Cleveland Browns this week.  And by “took on,” I mean that they handed the game to the Browns in the form of a very generous 8 turnovers (including a fumble at the very last second of the game, for good measure.)  Needless to say, the Steelers lost and it wasn’t pretty.  So let’s just move on to the food, shall we?  Cleveland isn’t exactly the first place we think of as a fine-dining mecca, but it has been garnering more respect from food critics in recent years (all the while proudly maintaining its notoriety as a blue-collar, burgers and dogs kind of town.)  Cleveland native Chef Michael Symon is credited with helping to revitalize the dining scene in the city and has 3 restaurants there.  He is possibly Cleveland’s most famous celebrity chef, so it seemed even more fitting that the recipe we chose for the Steeler Opponent-City Challenge this week is Chef Symon’s recipe for the “Polish Boy” sandwich.  We didn’t find much information about the origin of the Polish Boy, but this kielbasa sandwich, topped with cole slaw and french fries, is definitely a Cleveland favorite, sold at BBQ joints and by street vendors all over the city.  Chef Symon likes them so much that he featured the Polish Boy on an episode of “The Best Thing I Ever Ate” (“Between Bread” edition), and he put the sandwich on the menu at his Bar Symon restaurant in the Pittsburgh airport.  We’re fans of the Polish Boy as well (what’s not to like about a sandwich incorporating both grilled sausage and homemade french fries?!), which brings the current S.O.C.C. record to Steelers: 6-5, Foodie Laywer 10-1. 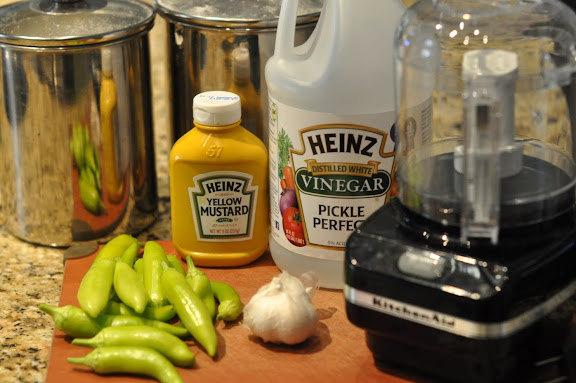 Several of the Polish Boy versions we found used BBQ sauce as a garnish, but Chef Symon incorporates a condiment called “shasha sauce,” made with banana peppers, garlic, yellow mustard, white vinegar, sugar and flour.  As Chef Symon explains in his book, “Live to Cook,” shasha sauce is a “verbatim family recipe” made each year with banana peppers grown by his mother-in-law.  In a happy coincidence, we just happened to have a lot of ripe banana peppers in our own garden, so the timing of this dish worked out great.  The sauce also turned out pretty great — like sweet & sour mustard with a kick from the peppers.  We still have some in the fridge and have been using it on ham and turkey sandwiches.  Chef Symon also recommends using it on scrambled eggs, as a sauce for pork, or as a seasoning in a vinaigrette. 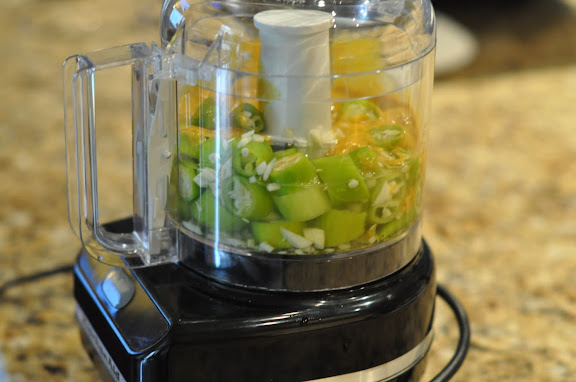 Coarsely chop the peppers (with seeds) and garlic (peeled), add them to a food processor and puree them with the mustard and vinegar. 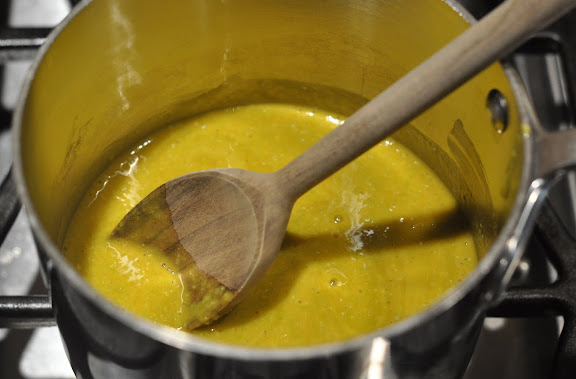 Pour the puree into a saucepan, add the sugar, bring to a boil, then lower to a simmer and cook for 30 minutes. 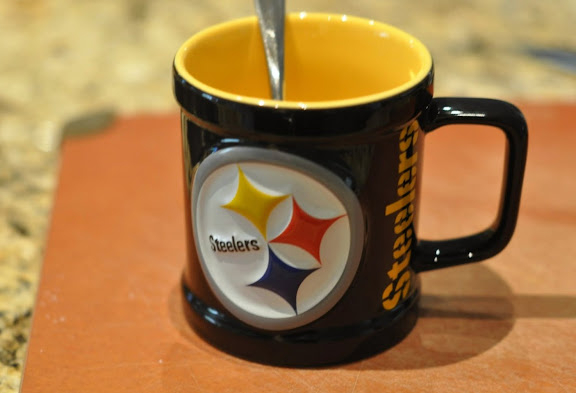 Here’s where the sauce gets a little (more?) weird — mix together the flour and water to make a smooth paste.  Then whisk the flour paste into the simmering sauce.  Continue simmering for 20-30 minutes, stirring often, until the sauce becomes very thick. 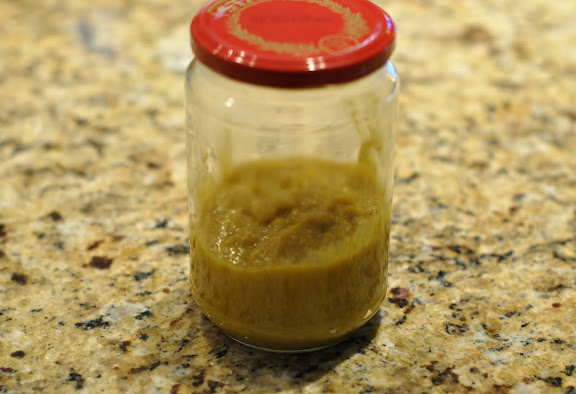 Place the sauce in a glass (or other non-reactive) container and refrigerate.  It should last for up to a month in the fridge. 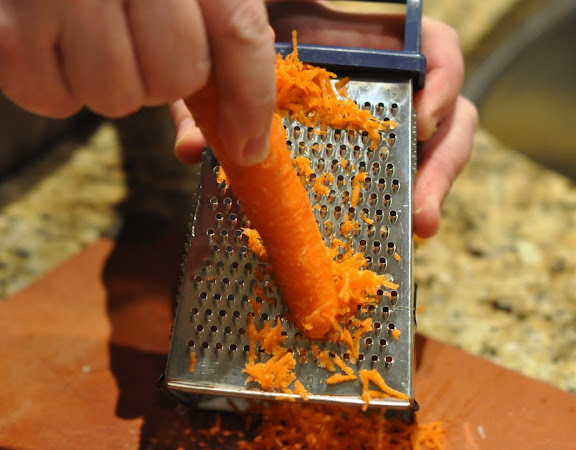 Next, prepare the cole slaw.  Chef Symon’s recipe calls for Napa cabbage, garlic, red onion and jalapeno as the slaw.  We used a shallot instead of red onion, omitted the garlic and added a carrot.  Grating the carrot with a cheese grater gives it a thin, shredded texture. 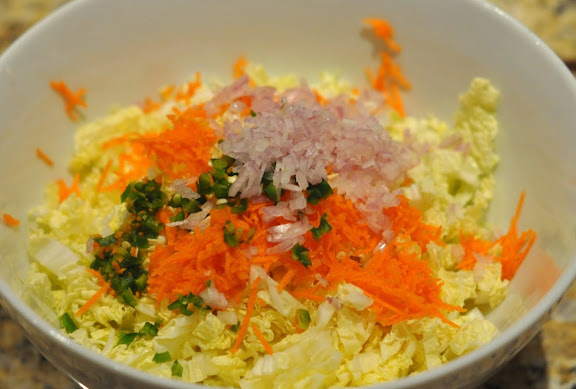 Combine the grated carrot with chopped cabbage, shallot and jalapeno in a large bowl. 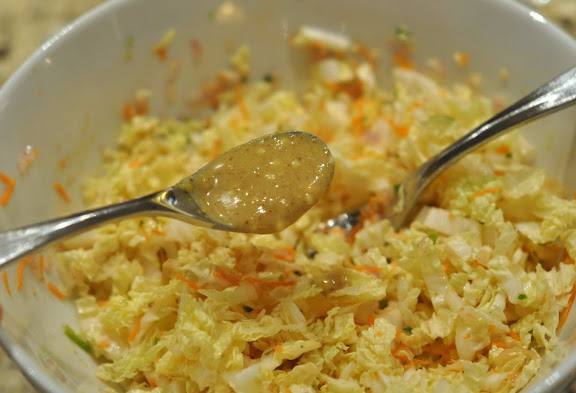 Lightly dress the slaw with a dressing made from Champagne vinegar, spicy brown mustard, mayonnaise, Worcestershire sauce, shasha sauce, sugar and salt.  Cover the bowl and refrigerate the slaw for about an hour to allow the flavors to come together. 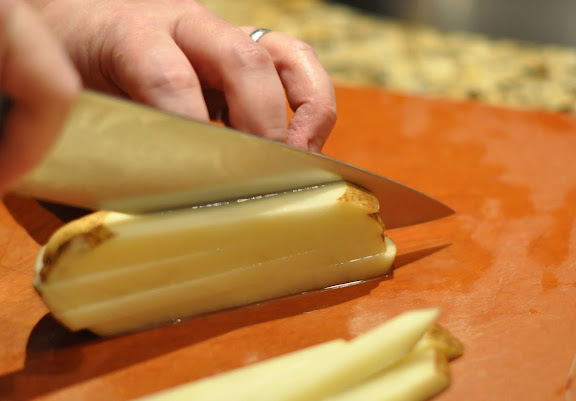 Next, prepare the fries.  Peel the potatoes and cut them lengthwise into strips. As you cut the potatoes, place them in a bowl of cold water to keep them from turning brown. 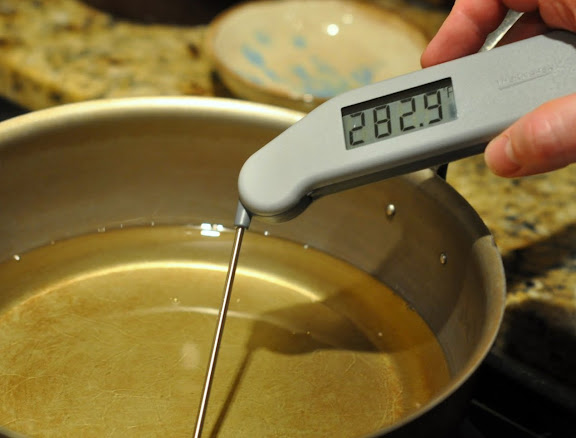 Heat the canola oil in a medium-sized pot until the temperature reaches around 275 degrees (plus or minus roughly the amount of turnovers in the game.) 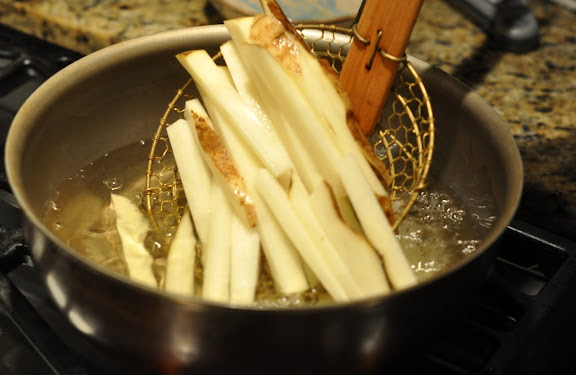 Drain the potatoes from the cold water and pat them dry with paper towels.  Gently add the fries to the hot oil, working in batches so you don’t overcrowd the pot, and cook until the fries are soft and pale — about 5 minutes.  The potatoes shouldn’t be cooked through at this stage — you’ll fry them a second time later.  Use a slotted spoon to remove the potatoes from the oil and drain them on a paper-towel lined plate or tray.  Reserve the pot of oil.  The original recipe calls for chilling the fries in the fridge before the second fry, but we were getting hungry and didn’t really have time for this extra step.  The fries turned out great without the extra step, and we got to eat before getting hangry (so hungry that you turn angry.) 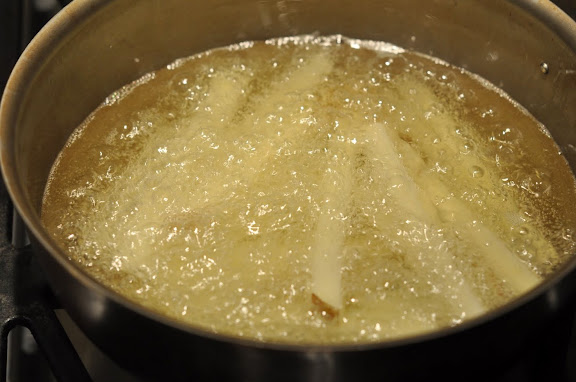 Turn up the heat until the oil reaches about 350 degrees, then add the fries (again in batches to avoid overcrowding) and cook until they are cooked through and golden brown — about 5 minutes.  Remove the fries to a paper-towel lined plate or tray (use fresh paper towels) and season with salt. 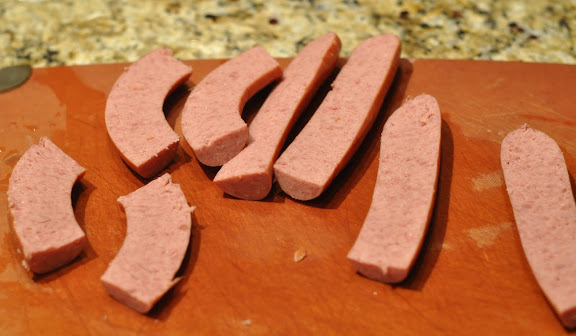 We sliced the kielbasa lengthwise, thinking it would help the curved pieces fit in the bun a little better.  Upon reflection, we really wish we had spiral cut them, like this. 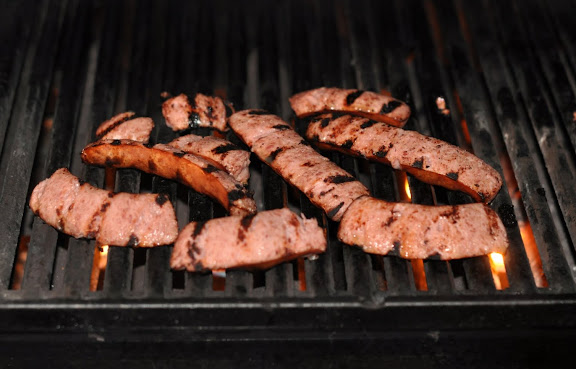 Grill the kielbasa, turning them over a couple of times (but less than 8 times!) to heat them evenly with nice grill marks — about 6-8 minutes total. 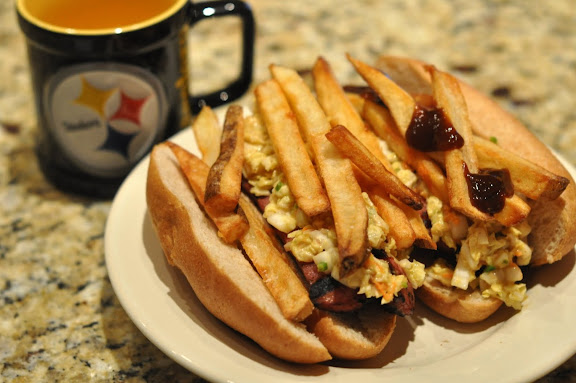 Serve the kielbasa in a bun, topped with cole slaw and fries.  We tried a little BBQ sauce on one of the Polish Boys as well, but ultimately preferred them without the BBQ.  They say “Cleveland Rocks,” and we say this sandwich rocks too!