If you’ve spent any time at all around this little blog, you probably know that Dan is a die-hard, life-long fan of the Pittsburgh Steelers.  Football season is his favorite time of year, and after growing up in Central Pennsylvania and graduating from the University of Pittsburgh Law School, he bleeds black and yellow.  Sadly, he married an apathetic-at-best football “fan” who has been known to refer to football season as “shopping season.”  In my defense, I do wear Steeler garb on Game Days (as long as it’s cute) and I “watch” the games (while multi-tasking with magazines and/or blogging and/or online shopping and/or doing my nails) to support the Team.  In an effort to get me more interested in football, we decided to try something new this year:  The Steeler Opponent-City Challenge.  For as many weeks as we can manage, we’re going to cook something from the city or region playing against the Steelers that week.  To begin the season, the Steelers played the Denver Broncos.  The first Denver-indigenous food that came to mind (after granola) was bison.  We decided to try bison steaks, fancied up with a red wine sauce, just in case we didn’t like the bison as much as we like beef steaks.  Turns out that the grilled bison was really good on its own, but the sauce was also decadently delicious and would taste great with beef steaks or other proteins as well.  Win-win.  (Unlike the outcome of the Steeler game against the Broncos, unfortunately.) 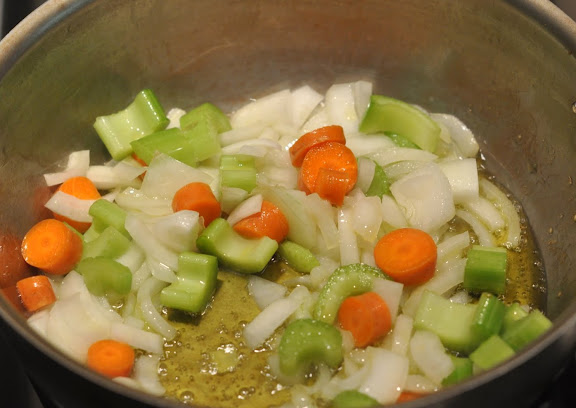 Start the sauce by heating a couple tablespoons of olive oil over medium-high heat, then add chopped onion, carrots and celery and cook until well browned — about 10 minutes.  (Roughly chop the veggies into 1-inch pieces, since they are only used as a flavor base and will be discarded later.) 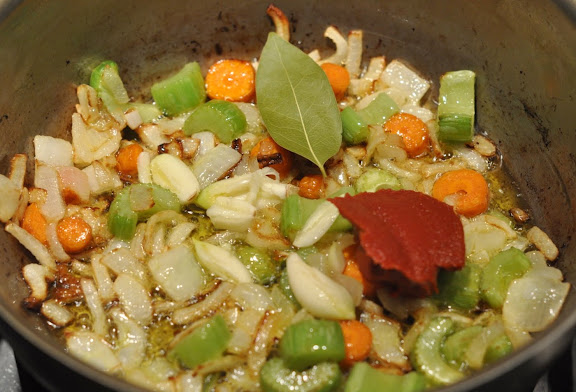 Stir in 3-4 cloves of garlic (peeled and crushed — not minced), a bay leaf and a tablespoon of tomato paste and cook until fragrant — about 1 minute. 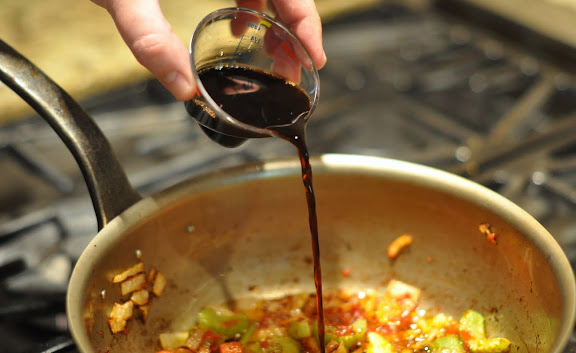 Add a cup of red wine and 2 tablespoons each of balsamic vinegar and red wine vinegar.  Bring the mixture to a boil and simmer until the liquid is reduced by two-thirds. 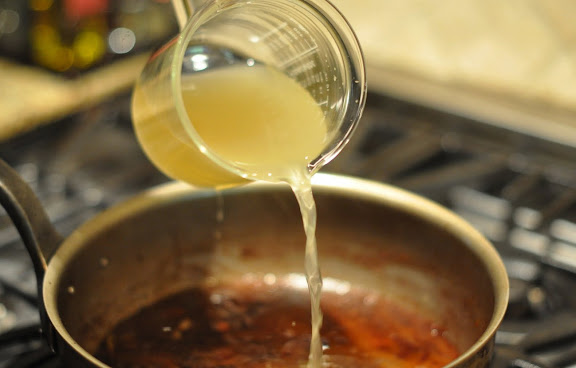 Add 3 cups of chicken broth (veal stock would also work, if you have it) and bring to a boil, then simmer until again reduced by two-thirds. 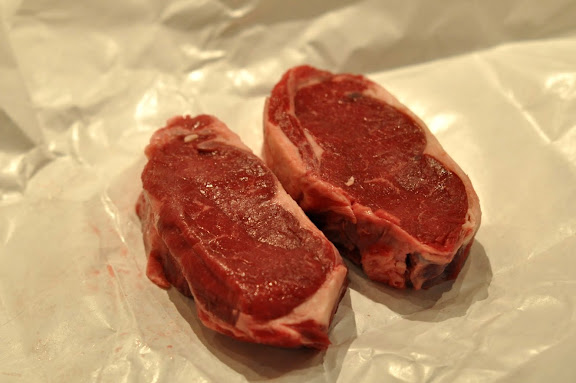 While the sauce cooks, allow the steaks to reach room temperature prior to grilling.  Bison may not be easy to find everywhere, but we got ours at our local Central Market.  In general, bison steaks are a lot leaner than certain cuts of beef, but may be more expensive than beef depending on where you live and how readily available bison is. 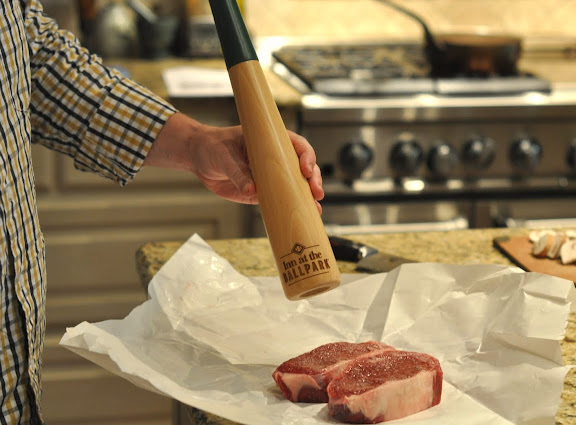 Season the steaks with salt and pepper on both sides.  (Check out our bat pepper grinder in action!) 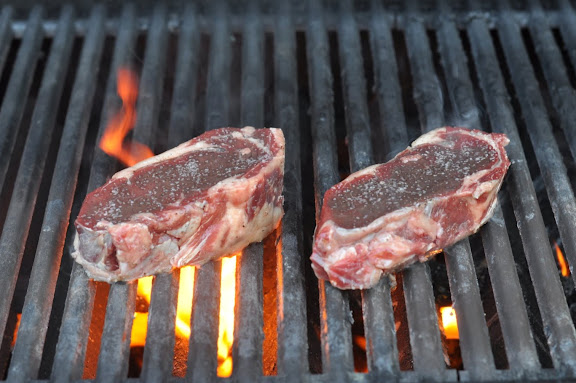 Grill the steaks over high heat, turning them over halfway through the cooking time, until cooked through to whatever done-ness you prefer.  We cooked ours until rare — about 9-10 minutes total. 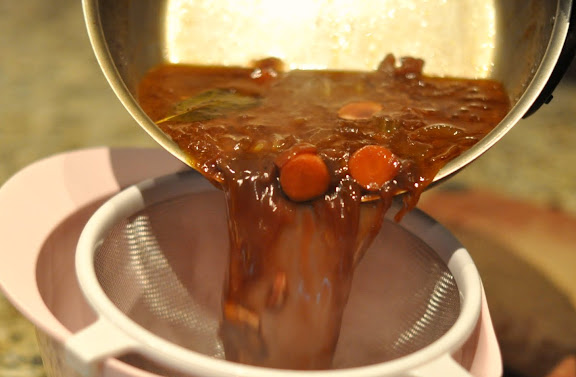 Strain the sauce through a fine mesh strainer into a bowl and discard the cooked vegetables.  Pour the sauce back in the pot and keep warm over low heat until the steaks are done.  (You can also refrigerate the sauce and re-heat it for later use.) 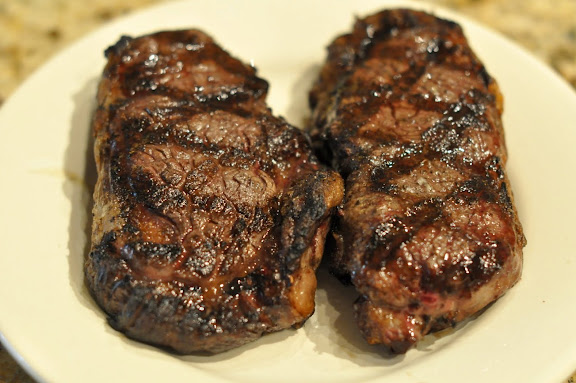 Allow the grilled steaks to rest for about 10 minutes so the juices redistribute. 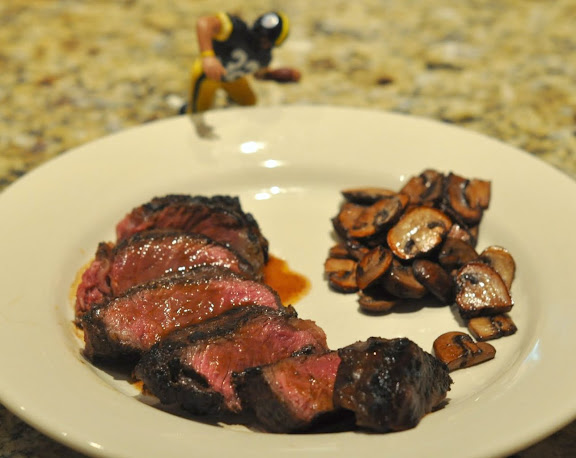 Slice the steaks, spoon the sauce over top and serve.  We served ours with sauteed mushrooms and a simple green salad.  The rich wine sauce complemented the beefy flavor of the bison very well, and the steaks had the perfect texture with crisp outer crust and tender, rare interior.  We’re glad we tried bison and look forward to trying a lot more new-to-us cuisine during this football season.  Go Stilllers!