As much as we like to use our slow-cooker for hearty, comfort-food meals when it’s cold out, we’re also making an effort to use it more often this spring and summer for lighter fare.  Posole (pronounced “po-SO-lay”) is a brothy stew that seems more light than traditional beef stew, possibly due to the mild flavor of the hominy that serves as the base of the soup.  But far from bland or boring, posole has layers of spicy and savory flavor from the hominy, chicken broth, browned pork, mirepoix (combo of onion, celery and carrot), green chiles, soy sauce, garlic and spices.  This stew can be further dressed up with tons of garnish options:  shredded lettuce or cabbage, sliced radishes, chopped green onions, diced avocado, pumpkin seeds, salsa, lime, cilantro, etc., etc.  There are almost as many different recipe options for posole as garnishes — we adapted ours from a recipe in this book, one of our favorite sources for slow-cooker ideas.  This was the first time we had ever made (or eaten) posole and we were pleasantly surprised by how much we enjoyed it.  Although posole is often served during Christmas or New Year’s holidays, we like it as a warm-weather dish, since it’s filling enough to be a full meal, but not so stick-to-your-ribs heavy that you feel like you need a nap after you eat it. 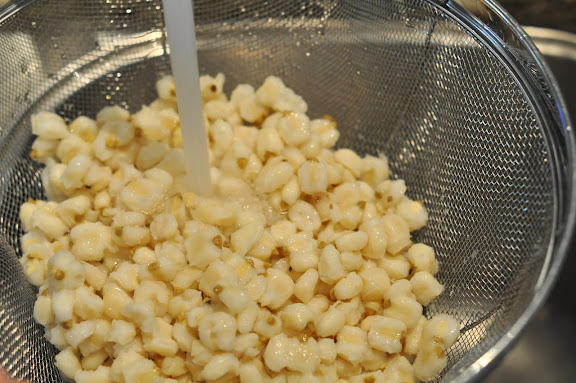 The consistent component across all posole recipes is hominy, which basically refers to corn kernels from which the germ and hull have been removed, often by soaking the corn in an alkali solution.  Without the germ and hull, the kernels puff up to nearly twice their size.  Whether the hominy is white or yellow depends on whether the original corn was white or yellow.  Now that you know way more than you ever cared to about hominy, also know that you can buy it in the canned food section of the grocery store and all you have to do is rinse and drain the kernels before cooking with the hominy. 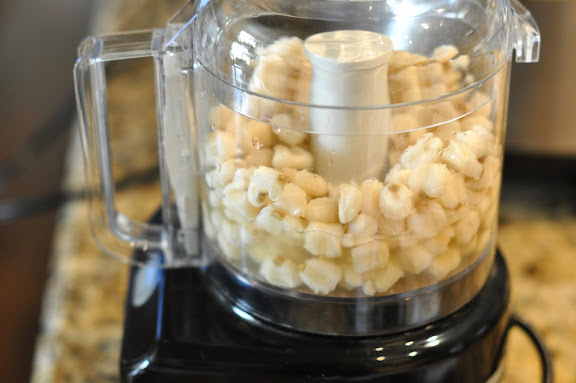 For this recipe, we decided to puree about half of the hominy with a cup of chicken broth, in order to give the finished soup a more creamy texture. 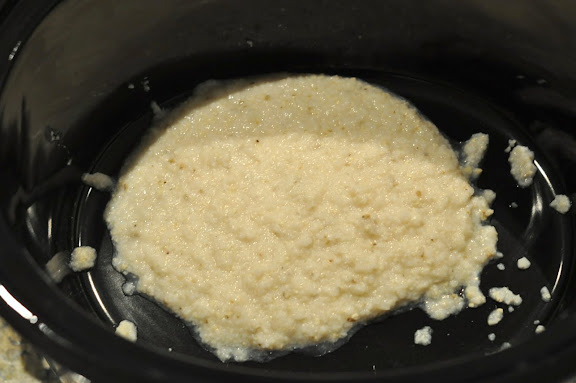 Add the pureed hominy to the slow-cooker. 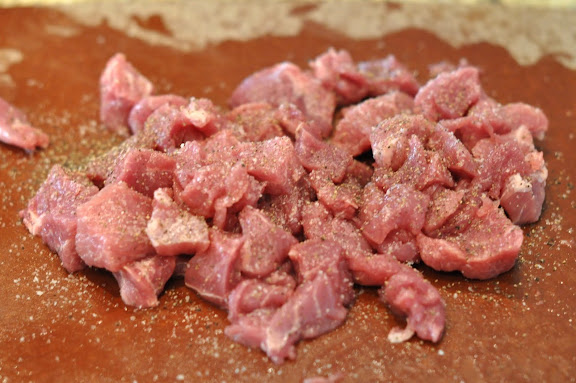 Cut the pork shoulder into 1/2-inch cubes and season it with salt and pepper.  (Most of the posole recipes we looked at used pork, but a few used chicken instead.   So feel free to use chicken if you don’t dig on swine.) 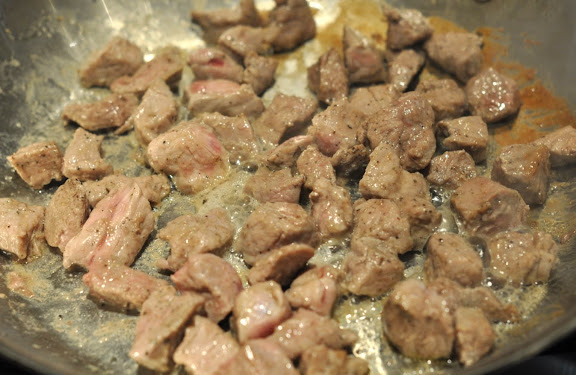 Heat a tablespoon of olive oil in a large skillet over medium-high heat, then cook the pork, stirring often, until it is browned on all sides — about 4-5 minutes.  You may need to cook the pork in batches to avoid over-crowding the skillet. 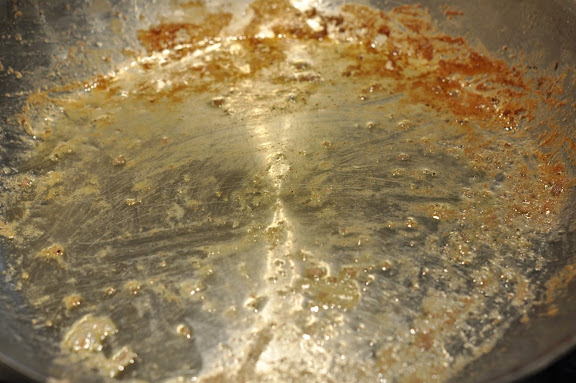 Transfer the browned pork to the slow-cooker, but retain any oil and pork juices (about a tablespoon total) in the skillet.  Add a little more oil if needed. 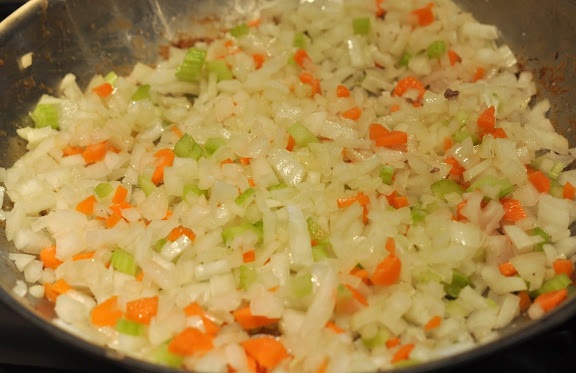 Add the chopped onion, celery and carrot to the skillet and cook until they begin to soften — about 6-8 minutes. 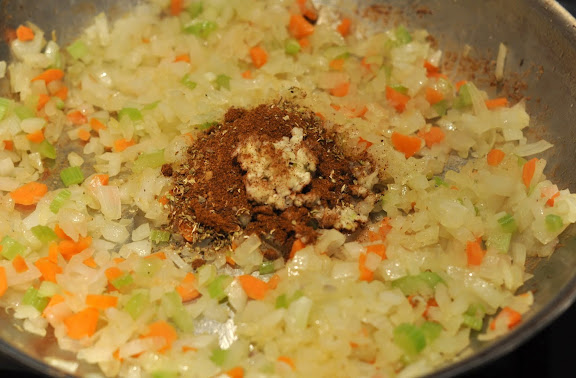 Add the minced garlic, chili powder, oregano and cumin to the skillet and cook until fragrant — about 30 seconds. 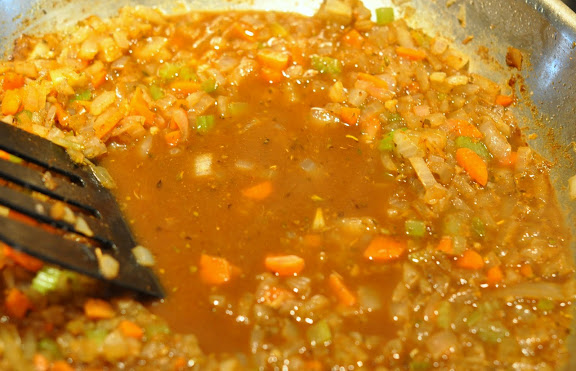 Add about 1/2 a cup of chicken broth to the skillet and scrape up any browned bits from the bottom of the skillet. 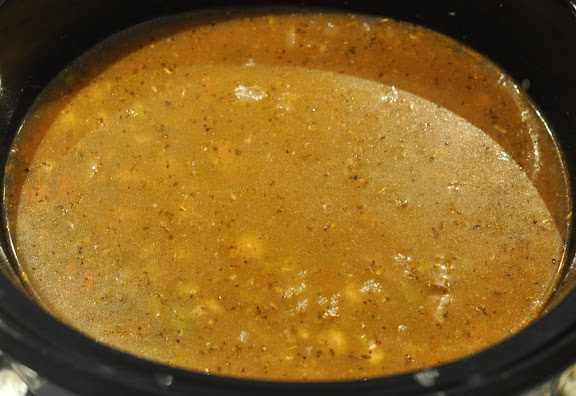 Transfer the veggies to the slow-cooker, then add the remaining chicken broth and hominy, as well as soy sauce and green chiles.  Stir everything together, cover the slow-cooker and cook the posole on low for 7 to 8 hours.  About 10 minutes prior to serving the posole, turn up the slow-cooker to high so the soup will be nice and hot. 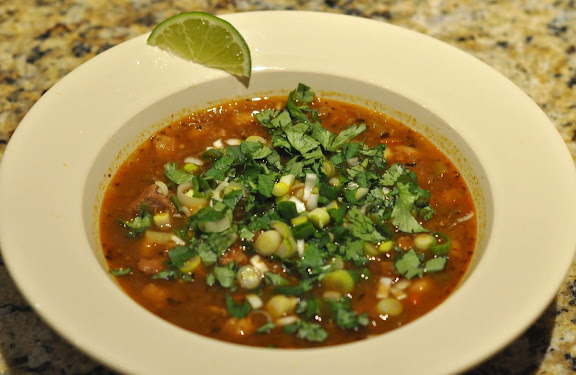 We garnished our finished posole with chopped green onions, cilantro and lime, although we’re intrigued to try some of the other garnishes (really curious how radishes would taste) next time.  No matter the other toppings, fresh lime juice is a must — a little squeeze really makes a difference and brightens up the flavors.