A little behind-the-scenes info about Foodie Lawyer — we process our photos in Picasa, creating a web album for each post.  When uploading the photos for this recipe, Dan accidentally named the folder “Mothered Pork Chops.”  Turns out to be a pretty good description of this dish, which tastes like your mom lovingly cooked it all day long.  But it’s actually the slow-cooker that does all the work.  All you (or your mom) have to do is cook a little bacon, brown some onions along with garlic, brown sugar and thyme, de-glaze with with chicken broth, then add those and the remaining ingredients (more brown sugar, bay leaves and pork chops) to the slow-cooker.  The end result is succulent, fork-tender pork smothered (or mothered) with a rich and delicious carmelized onion/bacon gravy.  The folks at America’s Test Kitchen come through for us yet again with this excellent recipe from their book “Slow Cooker Revolution.” 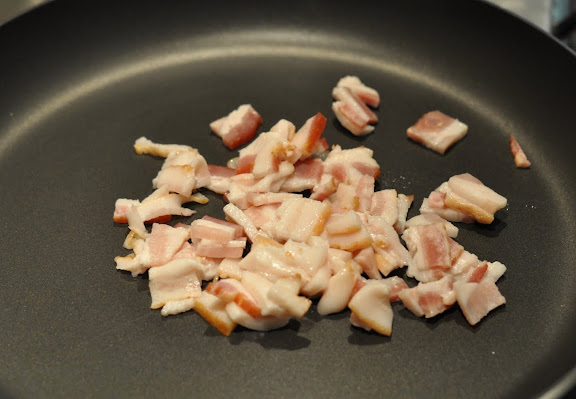 Start by chopping up 2-3 slices of bacon, then cook the bacon in a nonstick skillet until evenly browned — about 5-7 minutes. 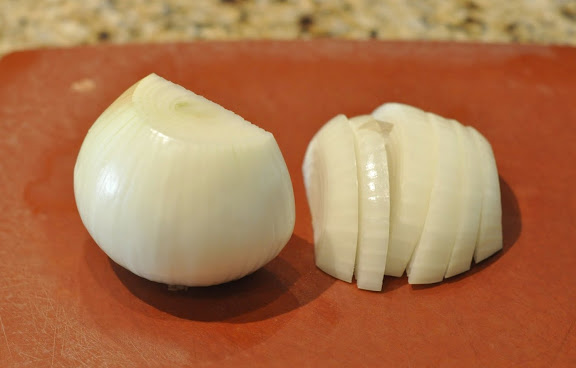 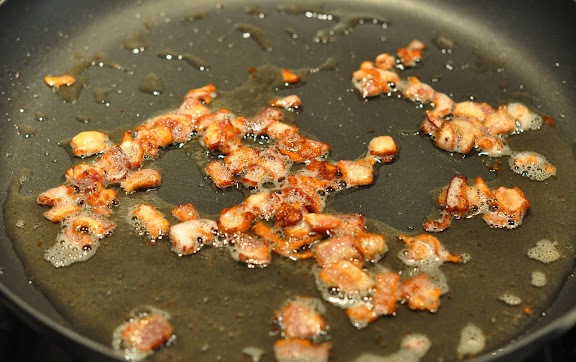 When the bacon is done, transfer it to the slow-cooker.  Spoon off (and discard, or keep if you need some extra bacon fat for other cooking purposes) all but about 2 tablespoons of the rendered bacon fat. Add the onion slices, 2 cloves of minced garlic, 1/2 teaspoon dried thyme and 1 teaspoon brown sugar to the skillet with the bacon fat.  (Yeah, that’s regular sugar in our skillet, not brown sugar.  Pro tip — it helps to assemble your ingredients ahead of time, focusing on the ingredient list in the recipe rather than the ingredients as described in the instructions.  Our pork still turned out delicious, but I think it would’ve had an even better carmelized flavor if I could read, cook and follow instructions all at the same time.  Oopsies.) 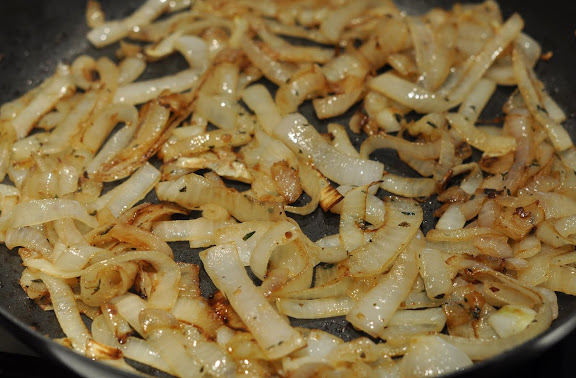 Cook the onions over medium-high heat, stirring often, until the onions are softened and browned (probably more browned if you use the right sugar) — about 10 minutes. 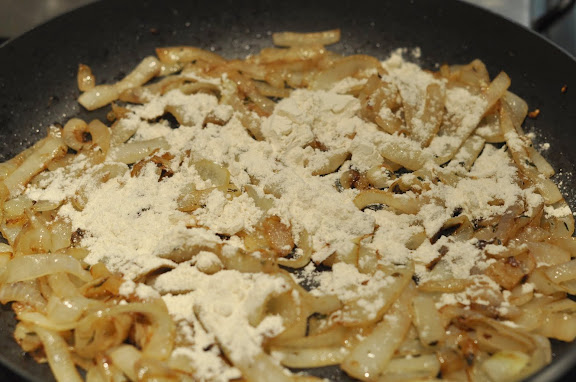 Sprinkle about 2-3 tablespoons of flour over the onions and stir them together.  Cook for about 1 minute. 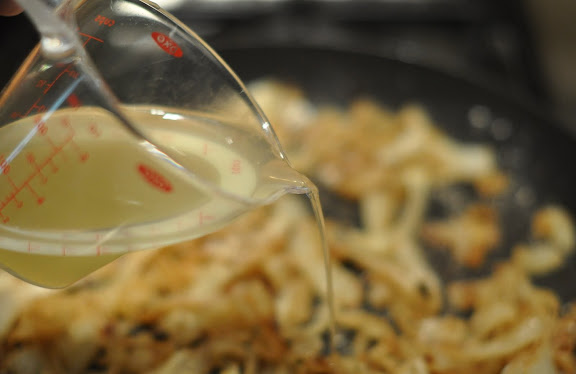 Slowly stir in about 1/2 cup of chicken broth. 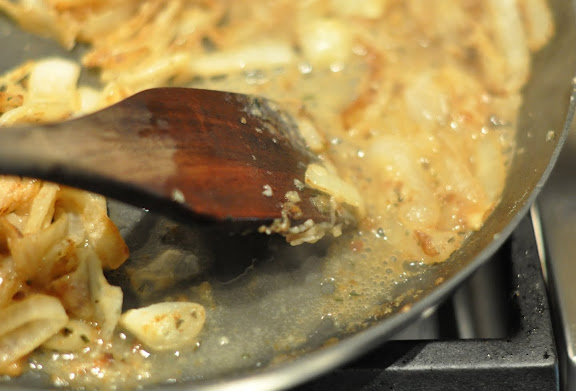 While adding the chicken broth, scrape up any browned bits from the skillet and smooth out any lumps from the flour. 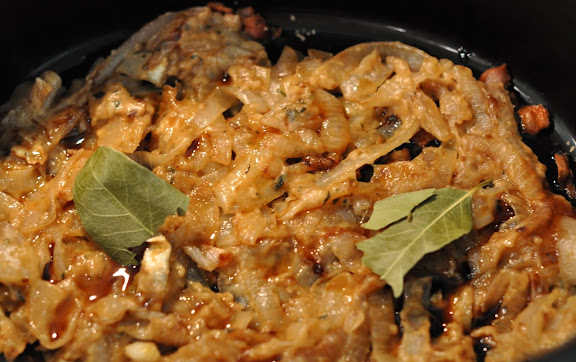 Add the onions to the bacon in the slow-cooker, then add 2 tablespoons soy sauce, 1 bay leaf (torn in half) and 1 teaspoon of BROWN sugar and stir everything together. 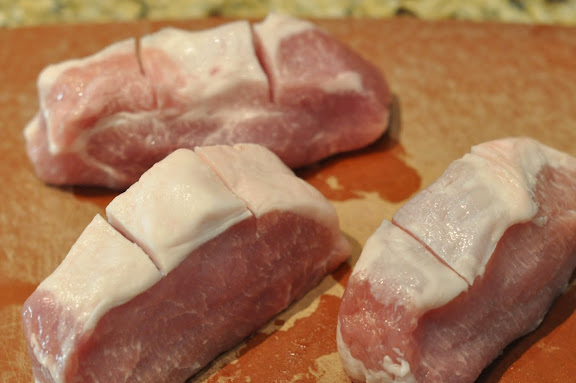 Cut 2 slits into the fatty side of each pork chop in order to prevent them from curling up as they cook. 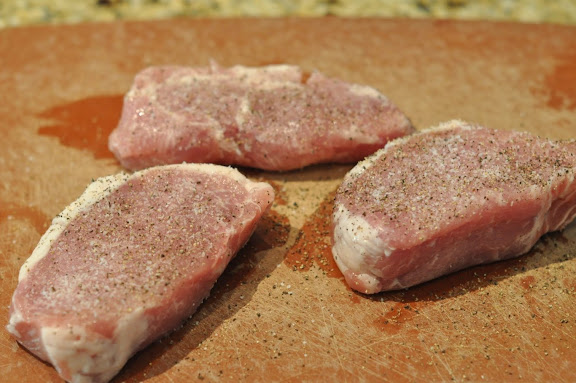 Season the pork chops on both sides with salt and pepper. 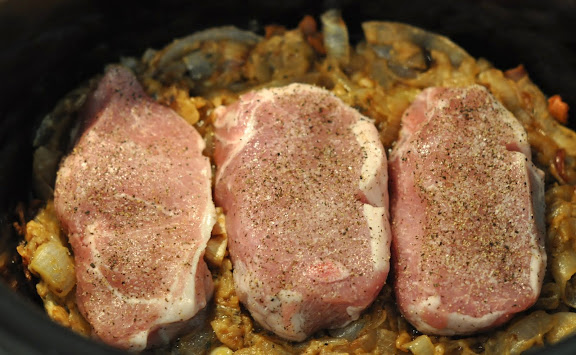 Nestle the chops in with the onions in the slow-cooker.  (“Nestle” — aww.  See how the “mothered” theme works with this recipe?) 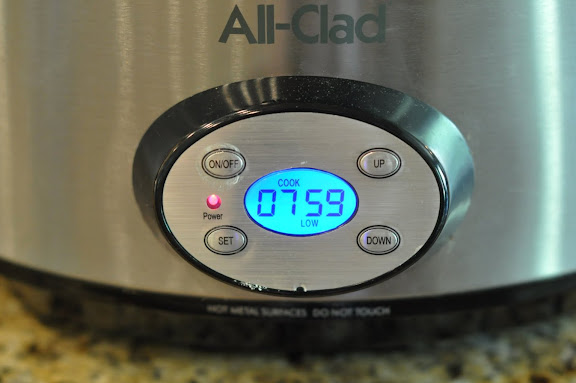 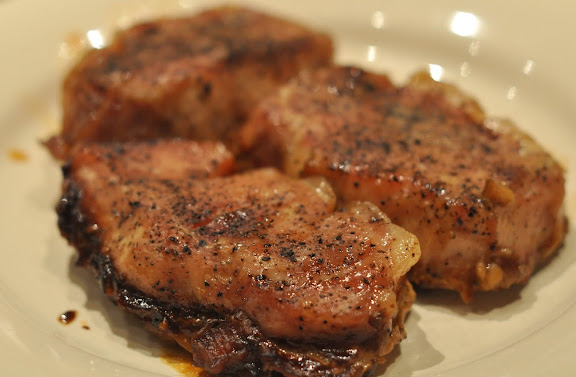 When the pork is done, transfer the chops to a plate and tent with foil to rest for about 10 minutes. 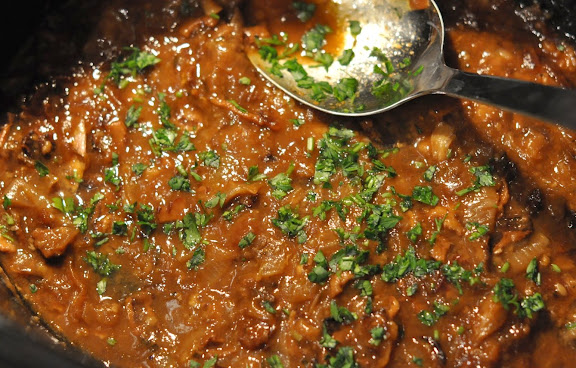 Allow the onion gravy to rest in the slow-cooker (heat turned off) for about 5 minutes, then skim off any visible fat (we didn’t really have any.)  Remove and discard the bay leaf.  Add 1/2 tablespoon cider vinegar and 1/2 tablespoon chopped fresh parsley and stir it all together. 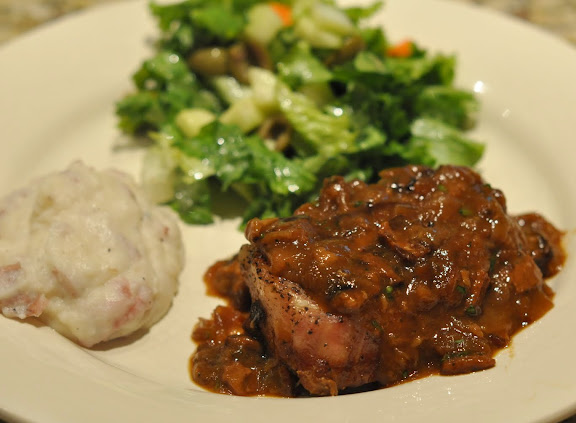 Mother each pork chop one last time with several spoonfuls of the onion gravy.  Then send the chops off to be eaten alongside smashed potatoes and a simple garden salad.  And hope they graduate with good enough grades to get a decent job that gets them off the family payroll…