In our attempt to cook with seasonal foods more often, we recently made a hearty winter salad featuring butternut squash and apples.  As a side dish for just the two of us, the recipe didn’t require much squash, so we had quite a bit left over — more than enough for a soup or stew.  Since our prior experience cooking with butternut squash is primarily limited to roasting it as a decadent side dish for Thanksgiving dinner, we wanted a relatively easy and fool-proof new recipe for cooking it in soup.  For me, cooking doesn’t get much easier than throwing a bunch of ingredients in a pot that you plug into an electrical outlet, then setting a timer and forgetting about it until the satisfying aromas wafting from the pot alert you that dinner is almost ready.  (Sort of like when Bill Murray’s character in the movie “What About Bob” learns how to “sail” while strapped to the sailboat’s mast — this method of food preparation allows me to say:  “I’m cooking!  I cook!  Well, actually, the slow-cooker does all the work.”)   We have had success with recipes from what has become our slow-cooker bible of sorts, America’s Test Kitchen’s “Slow Cooker Revolution” (most noteworthy so far, Chicken & Dirty Rice), and we found their chowder recipe to be deliciously successful as well.  Although it requires a bit of prep work on the front end and some assembly work at the finish, the recipe is easy and incorporates relatively healthy ingredients:  2 slices of bacon, 1/2 an onion, 2 garlic cloves, 3/4 teaspoon fresh thyme, a dash of nutmeg, 2.5 tablespoons all-purpose flour, 2 cups chicken broth, 1.5 cups vegetable broth, 1.5 pounds butternut squash, 1 bay leaf, 1/2 tablespoon vegetable oil, 4 ounces kale, 1/4 cup heavy cream, 1/2 tablespoon fresh sage, 1/2 teaspoon brown sugar, salt & pepper and Parmesan cheese and roasted pumpkin or sunflower seeds for garnish.  The resulting chowder was creamy, but not too rich, with sweet roasted squash flavor complemented by a hint of bitterness from the kale. 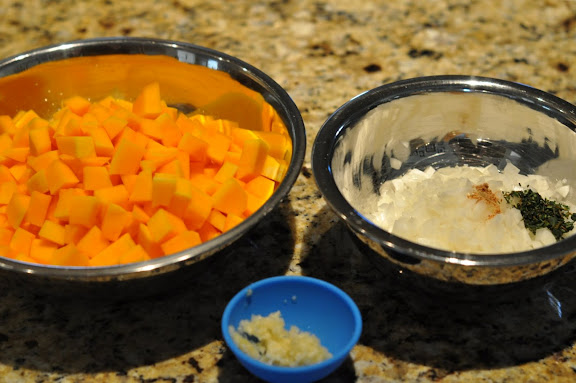 Start by prepping and assembling the ingredients:  peel the squash and remove the seeds, then cut the squash into 1/2 inch pieces; and mince the onion, garlic and fresh thyme. 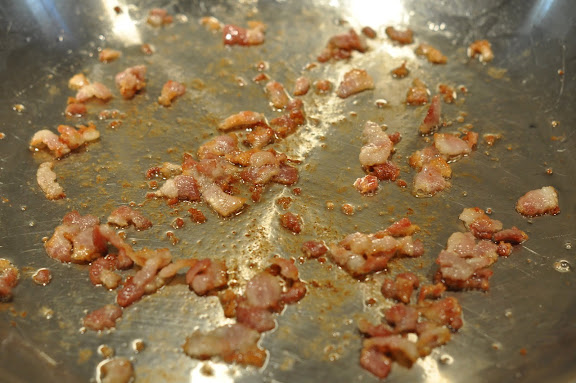 Chop up the bacon, then cook it in a skillet over medium-high heat until it is crispy — about 5 minutes. 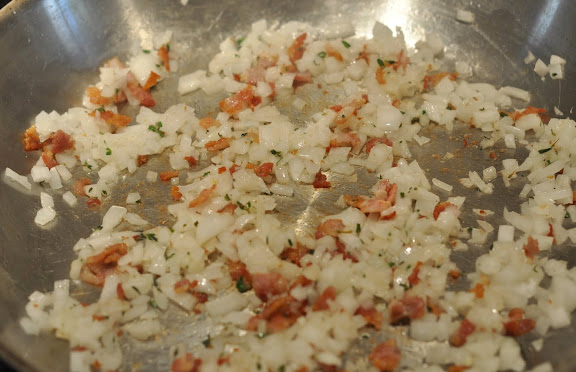 Add the onion, thyme and nutmeg to the bacon and cook until the onion is softened and begins to brown — about 8-10 minutes. 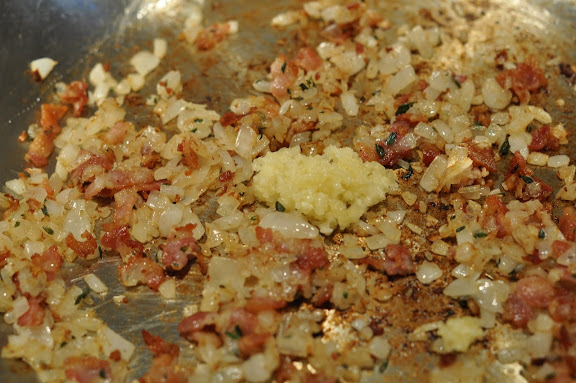 Add the garlic and cook until fragrant — about 30 seconds. 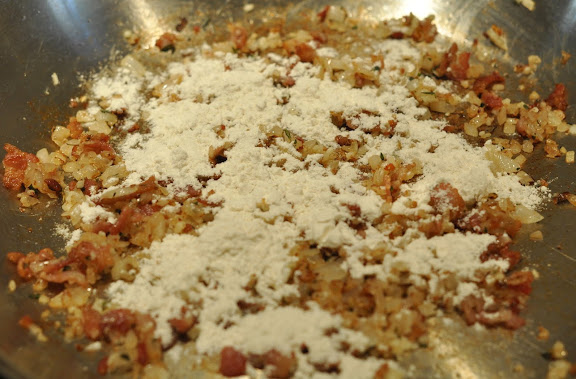 Stir in the flour and cook for about 1 minute. 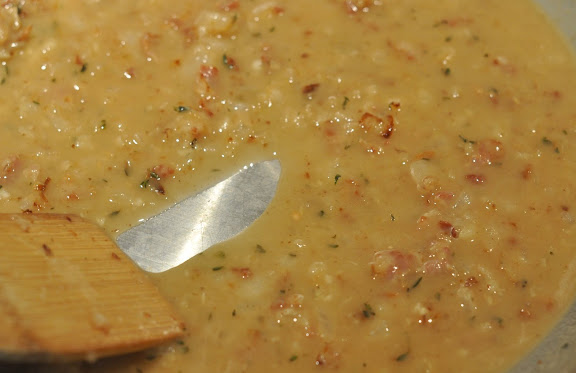 When the flour is incorporated and the mixture has thickened, slowly add 1 cup of the chicken broth and scrape up all the browned bits from the bottom of the skillet. 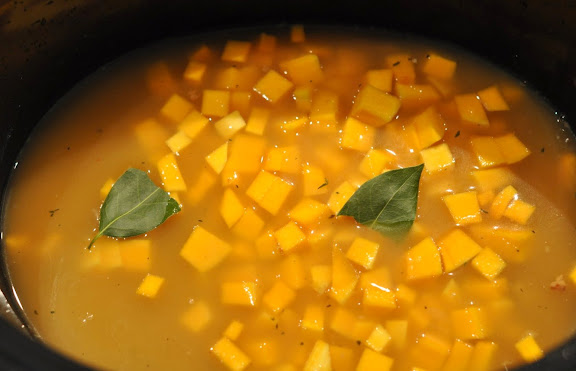 Transfer the bacon and onion mixture to the slow-cooker, then add half of the squash (the other half cooks separately), the remaining cup of chicken broth, the vegetable broth and the bay leaf (torn in half) to the slow-cooker. 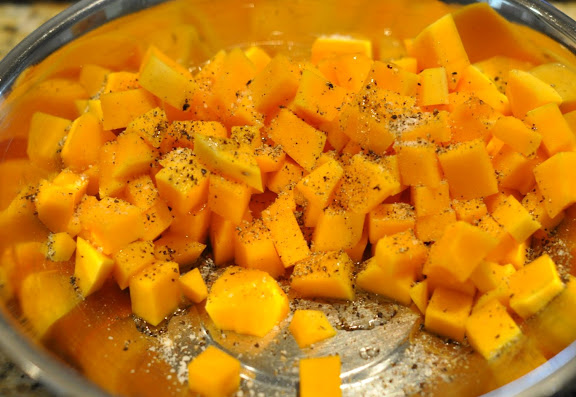 Toss the remaining half of the squash with vegetable oil and a generous amount of salt and pepper. 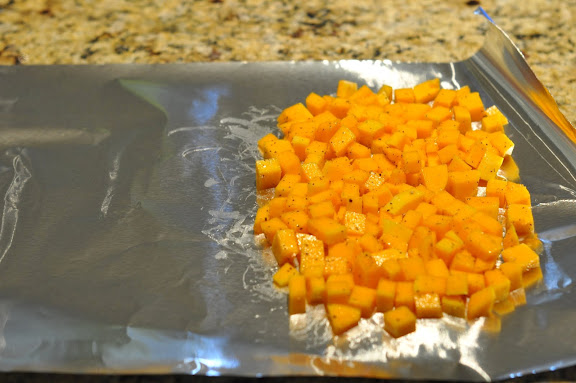 Make a foil packet for the seasoned squash by placing a layer of squash at one end of a piece of foil. 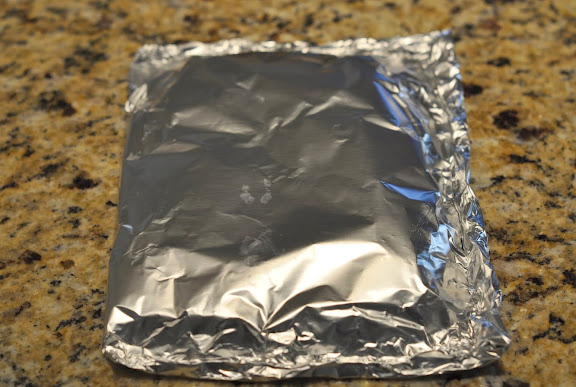 Fold the other end of the foil over the squash and seal all the edges. 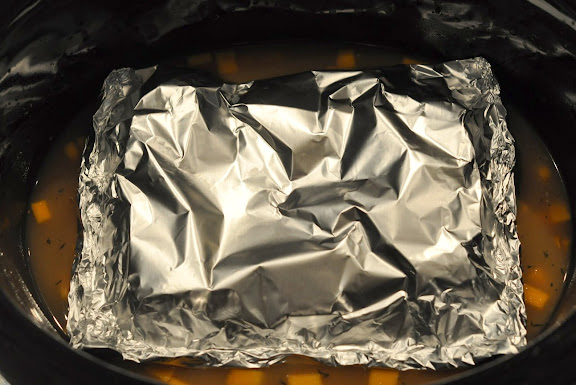 Place the foil packet on top of the liquid and squash in the slow-cooker, then cover the cooker and set it to cook on low until the squash is tender — about 4-6 hours.  Enjoy the rest of your day. 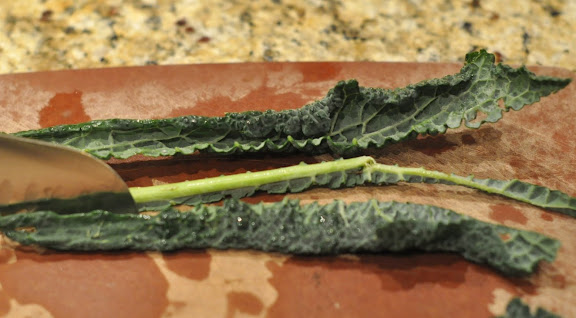 About an hour before it’s time to eat, prepare the kale.  Cut away the leafy parts from the stems and discard the stems. 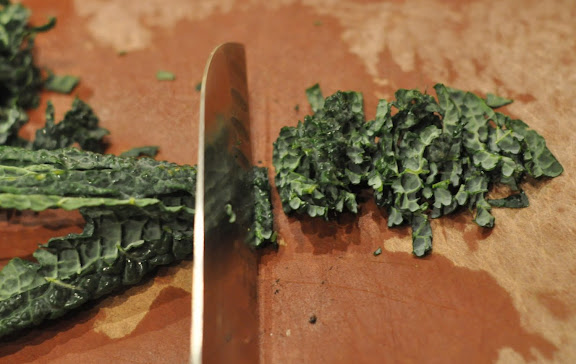 Then stack several leaves together and slice them cross-wise into thin strips.  Rinse and dry the leaves in a salad spinner.  Add the kale to the slow-cooker and cook on low until the kale is tender — about 20-30 minutes.  When you add the kale to the slow-cooker, remove the bay leaves and discard them, and remove the foil packet to a plate (keep it sealed so the squash stays warm.) 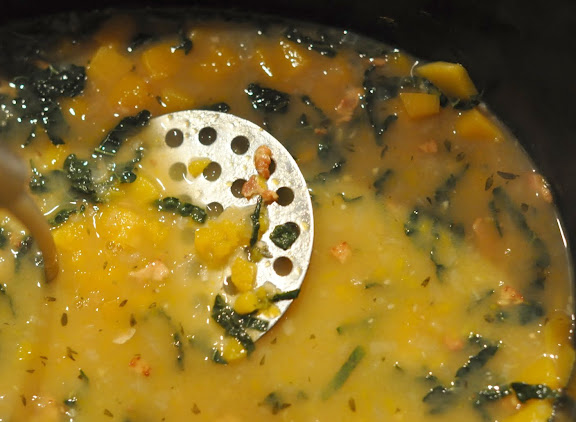 When the kale is tender, use a potato masher or ricer to further soften the squash pieces in the slow-cooker.  (Basically, squash the squash.)  This will make for a more creamy finished soup.  Skip this step if you prefer your chowder’s consistency to be more stew-like. 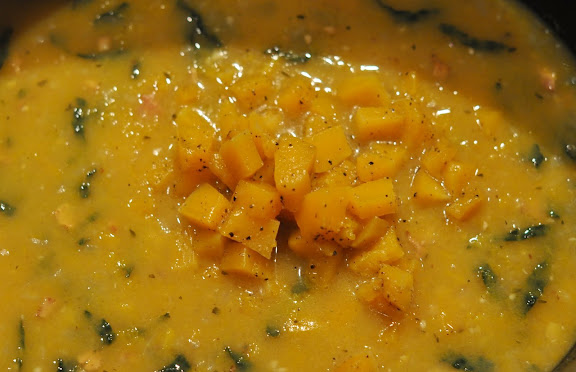 Open up the foil packet and add the remaining squash (with any accumulated juices) to the slow-cooker.  Stir in the cream, sage and brown sugar, then cook on high until the chowder is heated through — about 5-10 minutes.  Season with salt, pepper and additional nutmeg to taste. 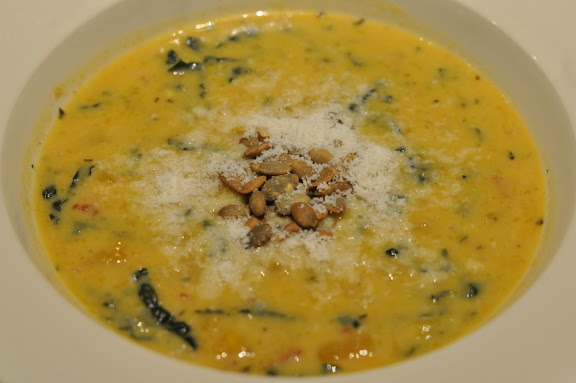 Garnish with shelled toasted pumpkin (or sunflower) seeds and grated Parmesan cheese and serve.   The chowder tastes like you spent all day slaving over the stove, layering ingredients and flavors.  So, just wash and store the slow-cooker prior to serving, then take all the credit for single-handedly preparing an amazing meal.  I’ll never tell.