This was our second year to participate in the annual Chili Cook Off networking event sponsored by the AlixPartners consulting firm.  Last year was our first-ever cooking competition, and although we didn’t win or even place, we had a great time and learned a few things.  In addition to learning that we don’t enjoy losing, we discovered that we could use sirloin like we do in our home recipe and that it would be pre-cut for us and supplied with our other requested ingredients on the morning of the Cook Off.  Knowing we could use our preferred cut of meat, we made up our minds last year that we would cook an even better batch of chili this year — good enough to place, or maybe even win… 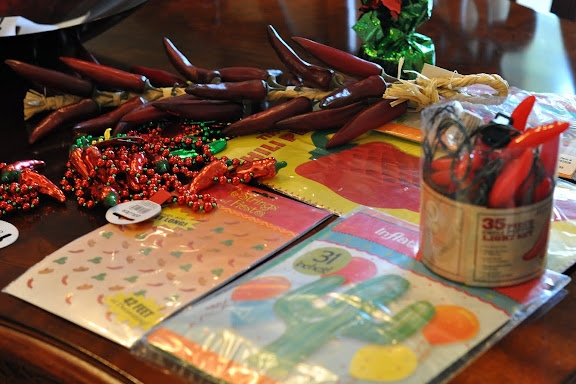 Another thing we learned last year is that the cooking stations with cute decorations to go along with good chili got more attention.  So I bought as many “fiesta” and chile-themed trimmings as I could find to beautify our booth.  (You didn’t really think I was going to tell you up front if we won or not, did you?  Silly.) 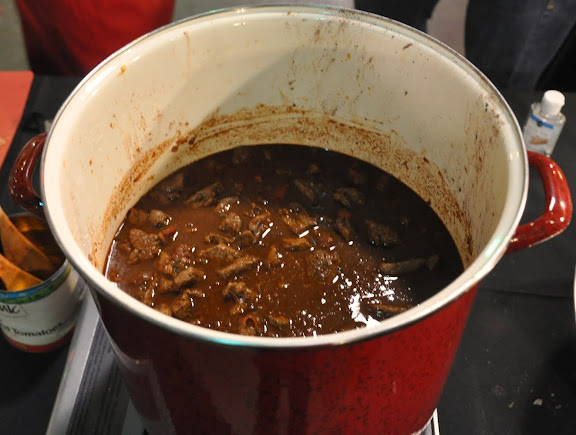 Could this be an award-winning pot of chili? 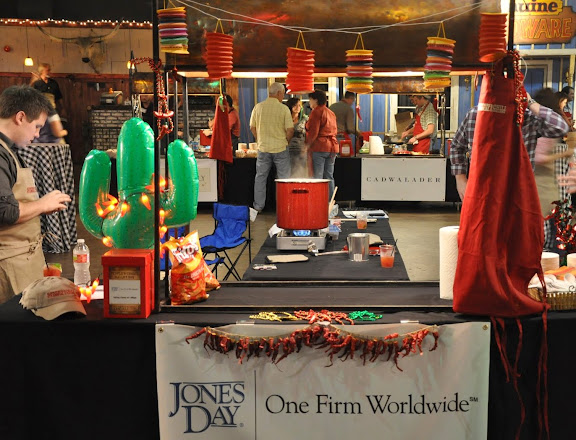 Once we got the chili on, I decorated our cooking station with some help from our AlixPartners sous chef and new friend, Josiah.  The inflatable cactus wrapped with chile lights was my favorite — thanks Josiah! 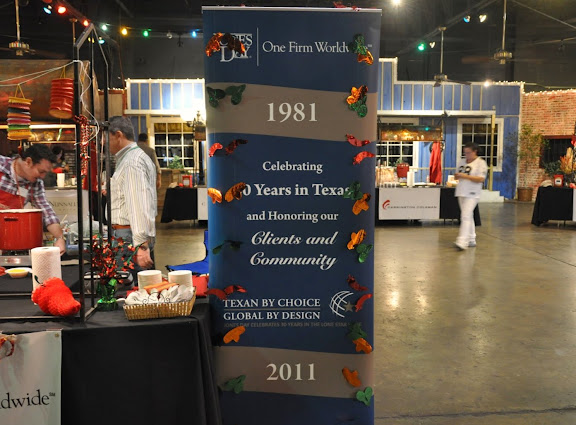 Perhaps having the biggest sign would give us an edge?  Maybe if we call further attention to said sign by draping it with “fiesta” streamers? 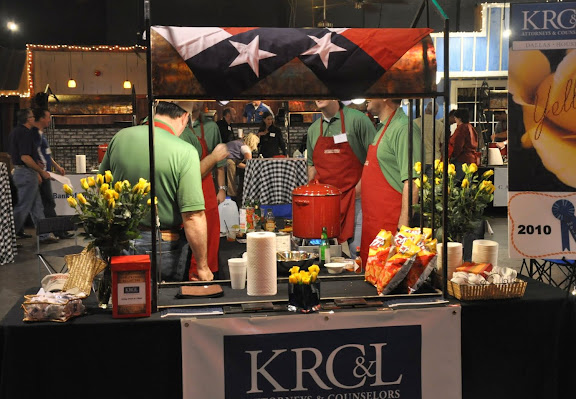 The team right next to us won the competition last year.  A fact which did not at all fuel Dan’s already competitive nature.  Not a bit.  I liked their tasteful, yellow-rose-of-Texas decor.  I wasn’t at all intimidated by their fresh flowers sitting beside my chile-fiesta-explosion next door.  But, would they be able to come up with an award-winning batch of chili for the second year in a row???? 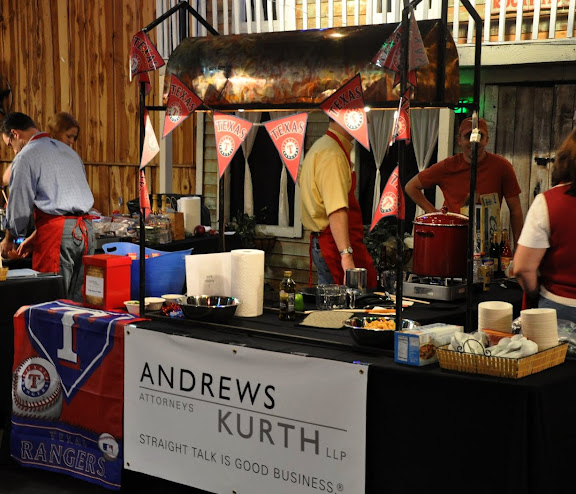 The Rangers made the MLB playoffs again this year, and received a nice nod from the Andrews Kurth team at the Cook Off.  But would these baseball-loving, super-fans knock it out of the park with the winning chili???? 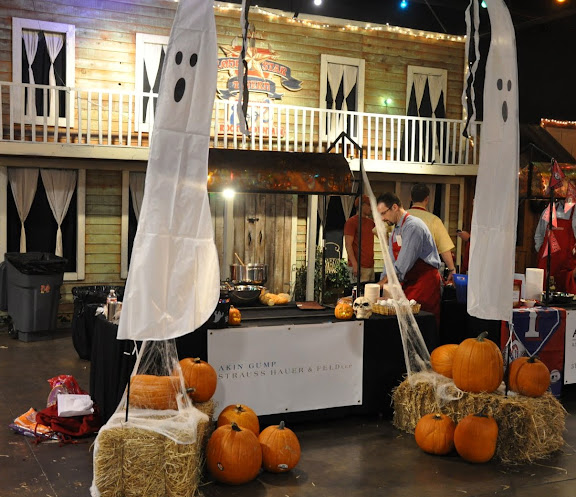 Akin Gump’s pumpkin and Halloween decor was probably my favorite.  But would their chili be scary-good enough to win???? 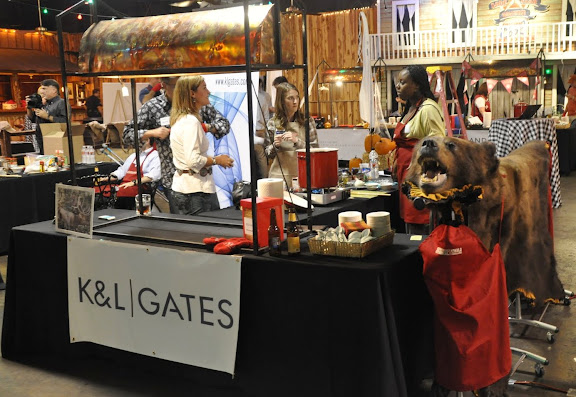 K&L Gates used elk meat in their chili, and took their Canada theme over the top with a bear skin rug, a guy dressed like a Canadian Mountie, and a guy in a moose costume (not pictured because he kept taking off his moose head before I could get a decent shot.) 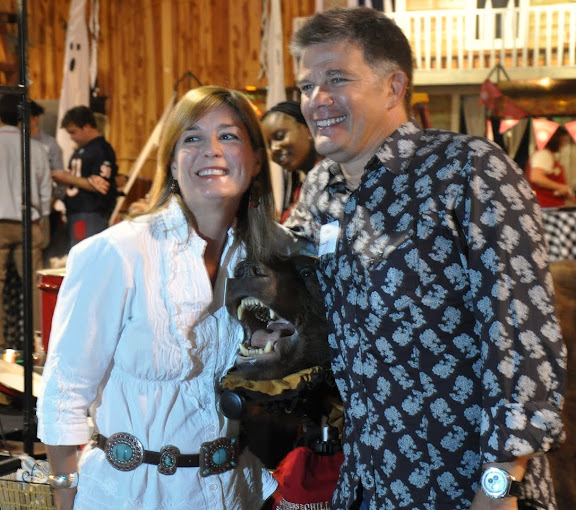 The bear skin rug provided for awesome photo-ops (with the first ever “photobomb” shot to appear on this site!)  But it was an interesting choice to pit the Canadian elk versus the cow in a Texas Chili Cook Off, eh???? 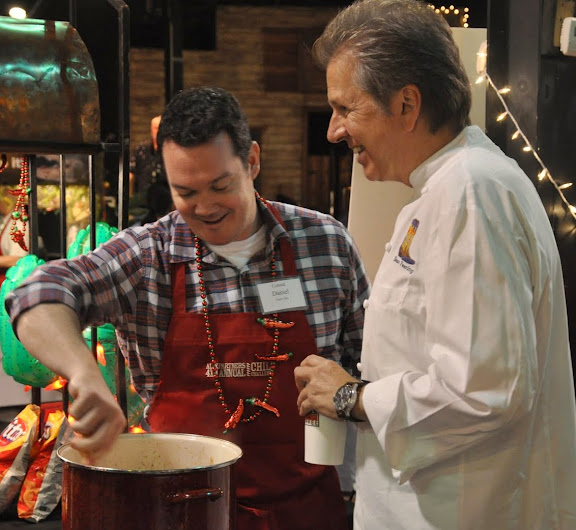 Dallas Celebrity Chef and Judge Dean Fearing stopped by to learn a bit about our recipe before the official tasting began. 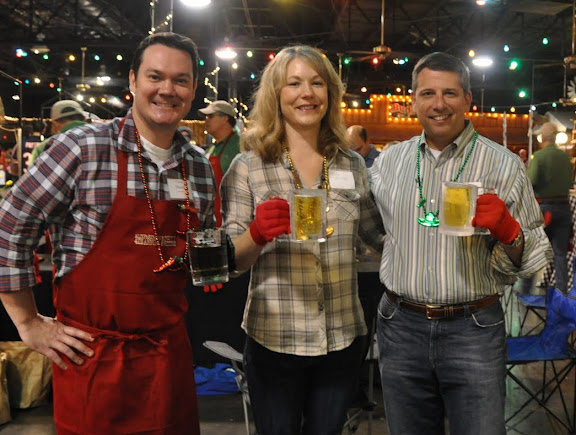 Taking a break with a nice ice mug of cold beer with our friend Craig. 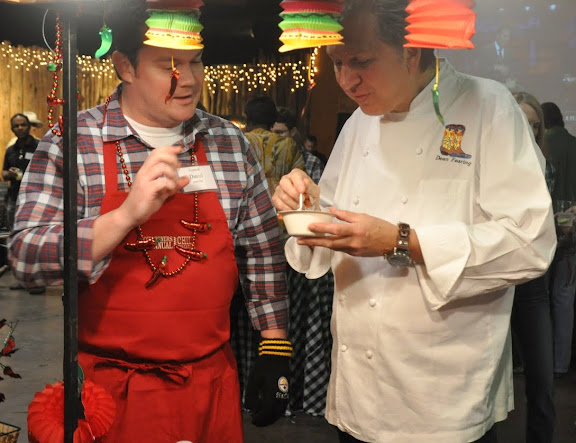 Official tasting time!  (Note to self — next year, garish “fiesta!” chile decor should be hung high enough to not dangle in front of Chef Fearing’s face.)  We didn’t get much of an idea about our chances from Chef Fearing’s first taste, although he was impressed with the color of the chili.  So we continued serving and chatting with all the people who visited our booth.  Perhaps lured in by the festive decor, we had enough visitors to pretty much finish off the entire pot of chili.  Some people stopped by because others had recommended our chili — what a nice compliment!  We also loved it when anyone asked for additional helpings of chili.  Speaking of which, we thought it was a pretty good sign when Chef Fearing came back for a second taste.  That didn’t happen last year, so we started to get a little excited that we might have a shot.  Then Chef Fearing came back AGAIN for a third taste.  What the whaaaaat???

Whether we won or not, we had a really great day, and kudos to AlixPartners for a fantastic networking event.  There must have been more than 400 people there and 30 teams cooking really delicious chili. 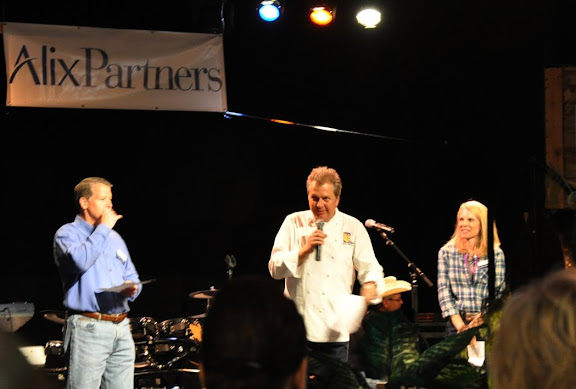 Time for Chef Fearing, flanked by AlixPartners executives, to announce the winners (and put you out of your misery.)  Drumroll please….. 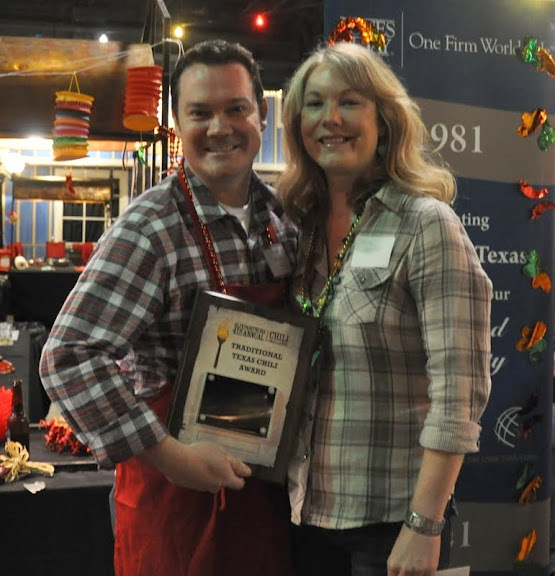 WE WON!!!!  Well, technically, we tied for first place with another firm, whose name I forget (seriously, in the excitement of our triumphant moment, I really did forget the name of the other team whose chili was somehow as good as ours.  Sorry, but congrats to you too, Insert-Multiple-Last-Names-Here Law Firm!)  We were, and are, absolutely thrilled!  Our plaque will get engraved and find a prominent place in Dan’s office.  And we will very much enjoy our first prize dinner for four at Fearing’s restaurant!  We are still basking in the glow of our victory, and haven’t yet begun plotting our strategy for next year.  But, when the time comes, we’ll be ready to defend our title.  Team Conrad!