We’re going to be participating in a chili cook-off at the beginning of October, so we decided to fine tune our chili recipe.  We’re fans of Texas-style chili, which means no beans, but plenty of beef.  We made our own chili powder from dried red chiles, added onion, jalapenos and a dark beer, then simmered.  The end result was outstanding.  We’re ready for October! 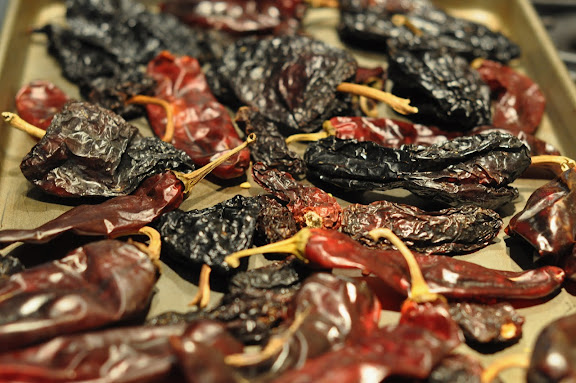 While you can buy chili powder at just about any grocery store, we prefer to make our own.  Start with two different types of dried red chili peppers, generally available at most grocery stores, but definitely found at higher-end stores.  We bought these at our local Central Market. 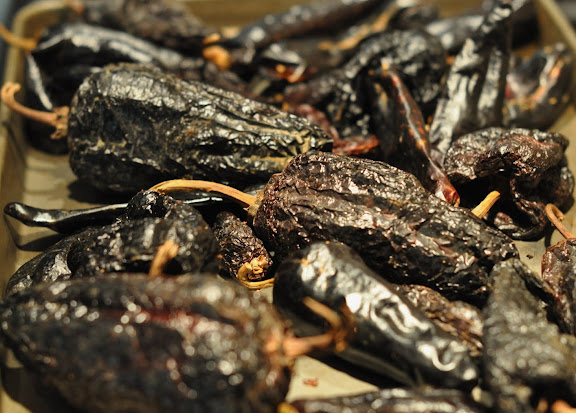 Even though the peppers are already dried, they still need to be roasted in the oven for approximately 8 minutes, allowing them to be ground into a fine, delicious chili powder.  Turn the peppers once during the roasting.  If you like Chili, your mouth will be watering as the peppers roast because your whole kitchen will smell like Chili.  The above picture shows how the peppers puff up a bit after you roast them. 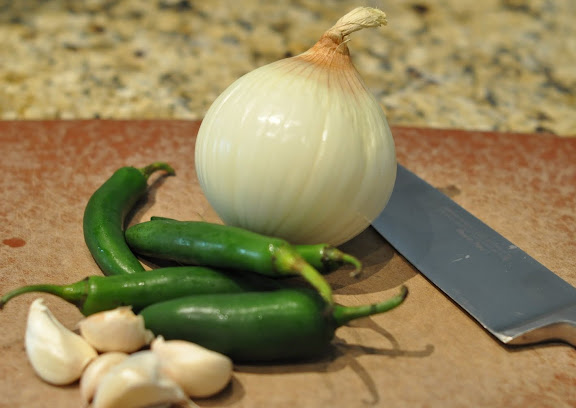 While the chile peppers are cooling, chop up a medium onion, several cloves of garlic and some jalapeno peppers. 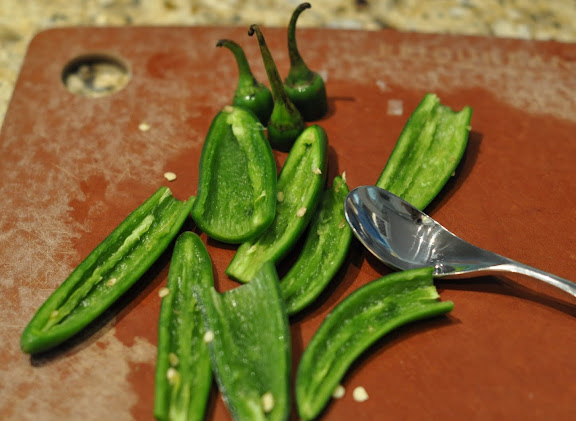 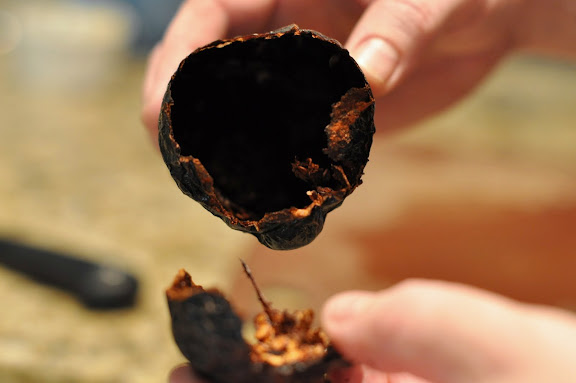 Once the dried chiles have cooled, stem and seed them.  Just break off the top and pour out the seeds. 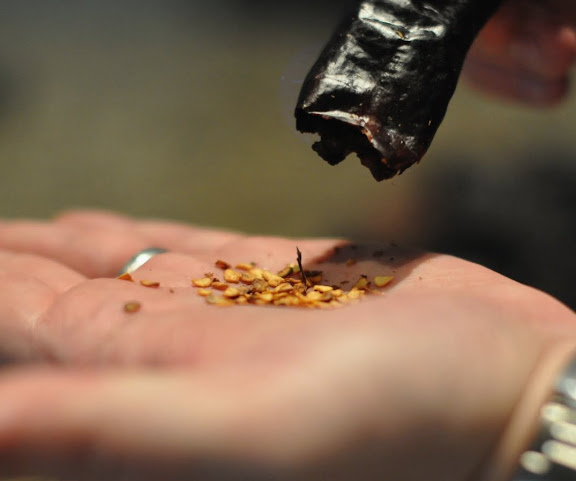 Chili seeds.  This is a good time for a little PSA about NOT EVER NEVER EVER touching your eye, anywhere near your eye, or pretty much your whole face while you are making Chili.  Despite the fact that during the Chili-making process, your eyes will inevitably and inexplicably itch like never before.  Still, don’t do it. 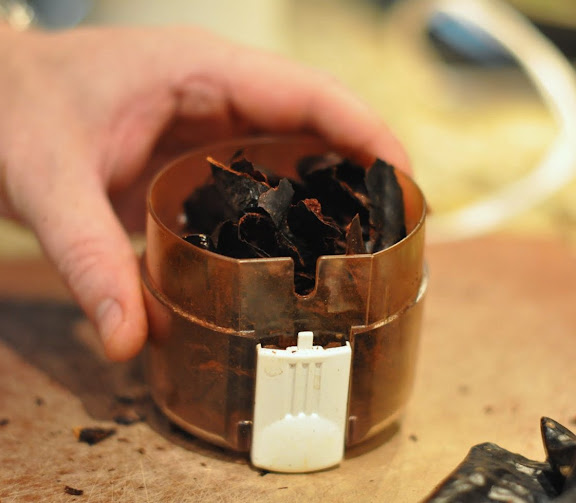 We have a coffee grinder we use exclusively for grinding spices.  We have a separate one for grinding coffee, of course, and not because we ever mistakenly used the chile grinder for coffee beans.  Nope, not us. 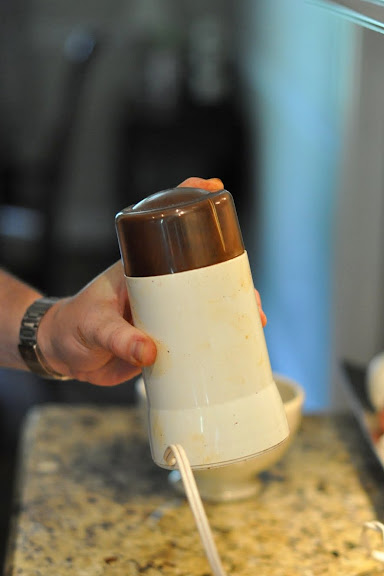 Working in batches, crumple dried red chilies into the top of the coffee grinder and grind them into a fine powder. 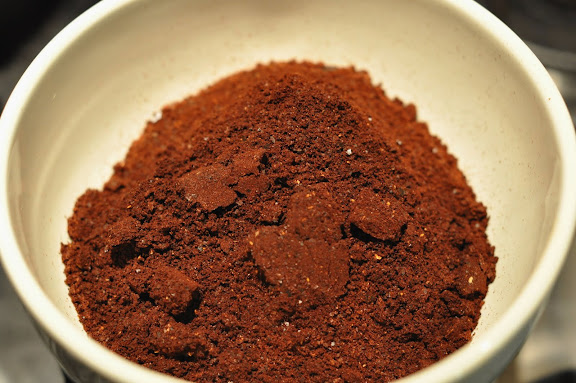 Homemade chili powder is worth the extra time (and the incredible mess that Dan makes on the counter), because the final Chili is much more flavorful than if you use store-bought chili powder.  But, if you decide to use pre-made chili powder from your grocer, at least make sure that you use freshly-purchased chili powder, rather than the stuff that has been sitting in the back of the cabinet for the last year(s). 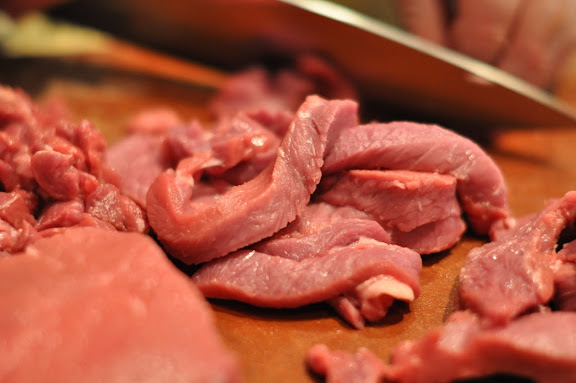 Most chili recipes use ground beef, but if we have the time, we prefer to buy top sirloin, trim off most of the fat, and cut the sirloin into small pieces.  First, cut the beef into thin strips 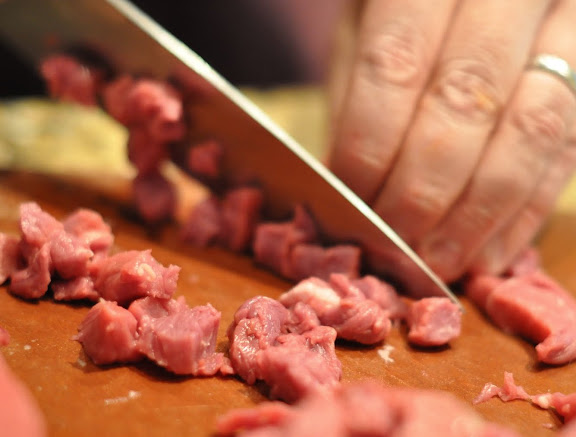 Then cut the strips into small pieces.  Many grocery stores sell a coarser-ground beef labeled “chili grind,” which also works well for Chili, but it’s generally not available until later in the Fall (we know because we tried to buy some at 2 different stores this weekend). 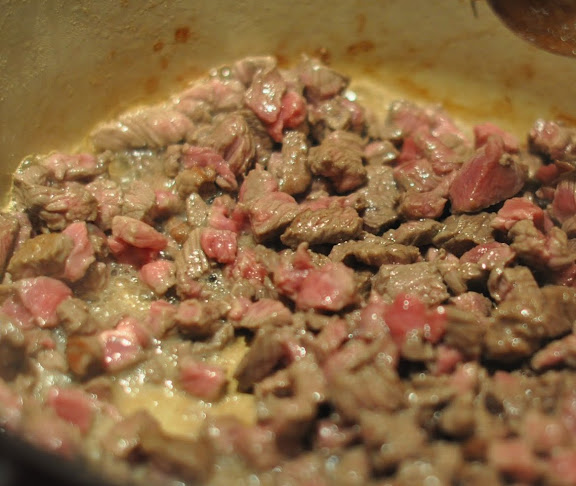 Working in several batches, brown all the beef in a large Dutch oven. 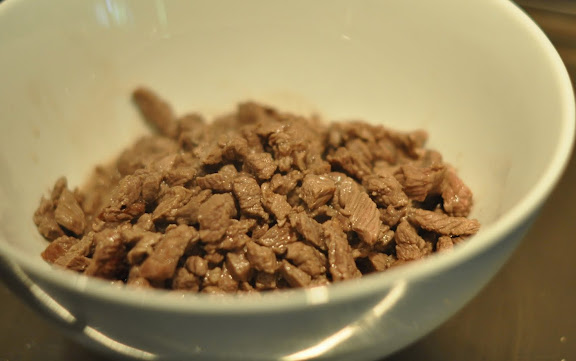 After each batch of beef is browned, dump the beef and any accumulated juices from the Dutch oven into a medium-sized bowl. 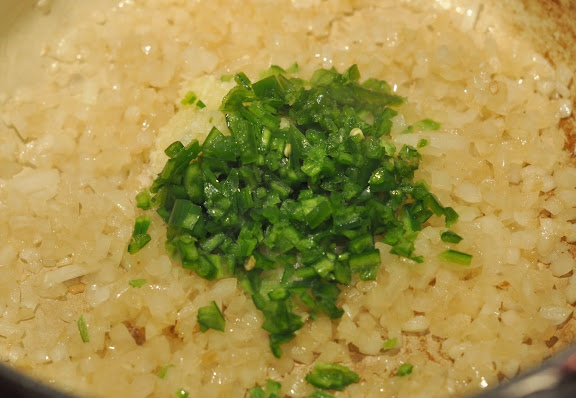 When the beef is all browned and removed to the bowl, saute the onion for approximately five minutes until it becomes translucent and soft.  Add the chopped jalapenos and garlic and stir well. 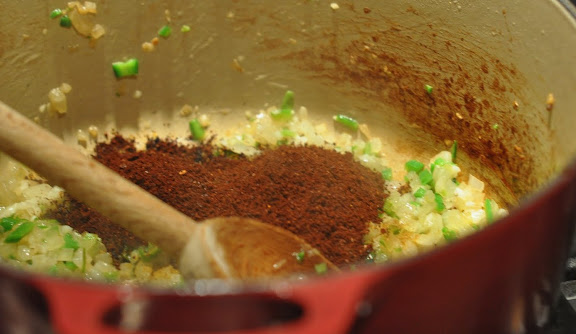 After about a minute or so, add the chili powder — approximately 2 tablespoons per pound of beef.  Also add some ground cumin and oregano, then stir the spices into the onion mixture. 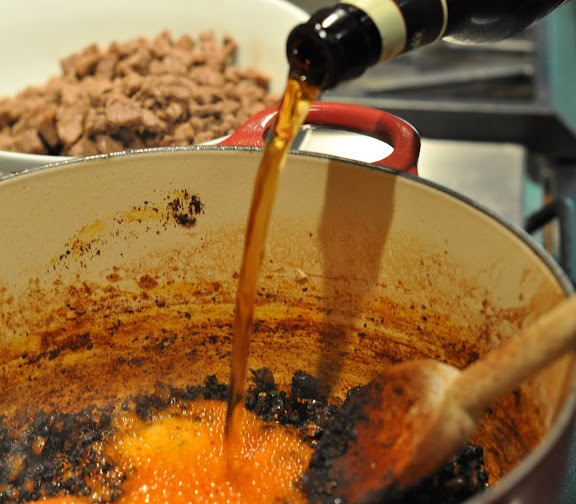 Add about 2/3 of a bottle of beer, preferably something dark.  Stir the chili powder mixture into the beer and cook for a few minutes.  (We’ve heard from a chili expert that if you wait and add [even more] beer at the end of cooking, your chili will have a “raw beer” flavor, which incidentally will not win you any prizes in a Chili cook-off). 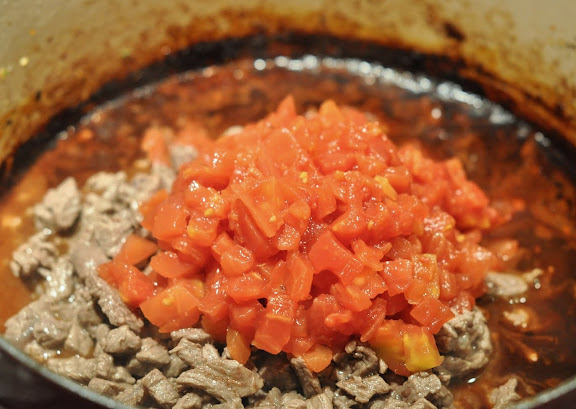 After adding the beer and letting the Chili cook for a few minutes, add the browned beef and any accumulated juices from the bowl, then add a 14 ounce can of diced or crushed tomatoes.  Next, using the can from the tomatoes, add two cans of water to the pot and stir well. 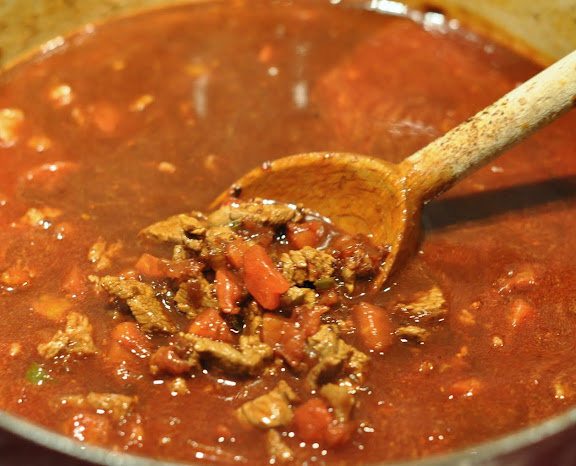 Heat the Chili until it boils, then reduce to a simmer and cook for approximately an hour and a half. 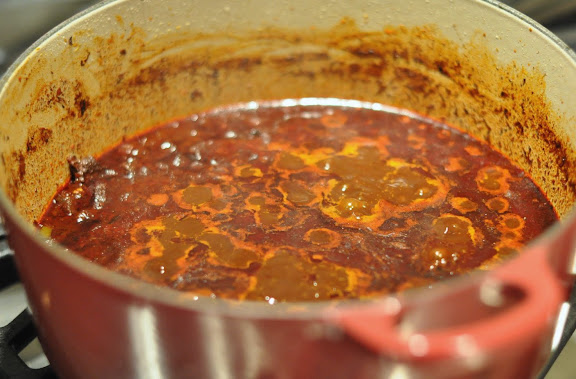 As the Chili cooks, skim off any fat or grease that rises to the surface. 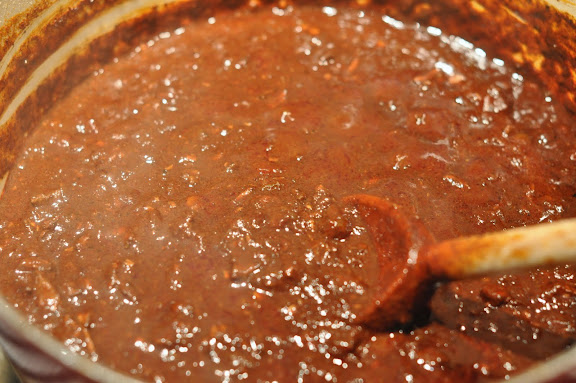 An optional step is to thicken the Chili with a cornstarch slurry (some cornstarch mixed with a small amount of cold water, stirred well, then added to the Chili).  Season generously with salt and pepper, and get ready to eat! 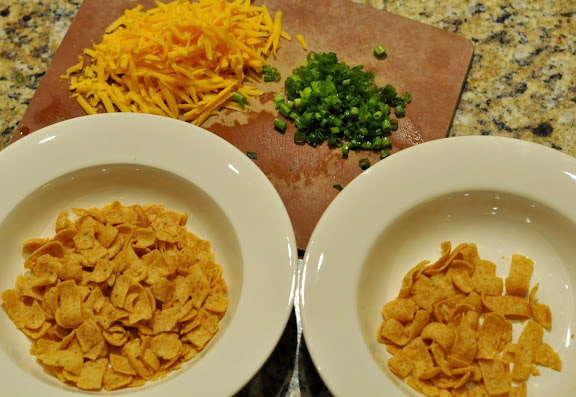 You can eat Chili in so many different ways — straight out of the pot in a bowl with saltine crackers on the side, served over noodles or macaroni, or garnishing a hot dog — just to name a few.   Tonight we had a Frito(R) pie.  Add a generous amount of corn chips to a bowl (you’ll note that my bowl to the left has considerably more corn chips, Dan has less).  Then add Chile, cheddar cheese and green onion tops (scallions). 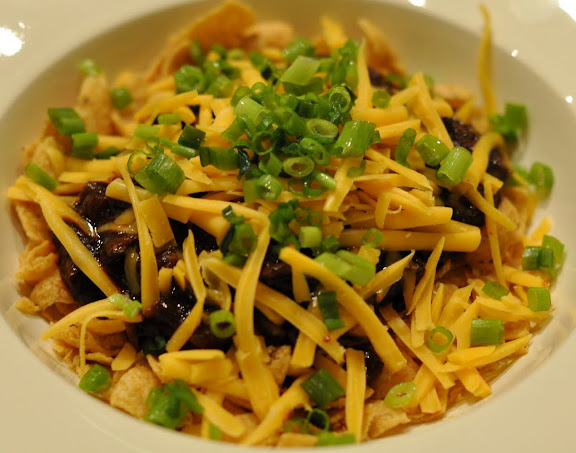 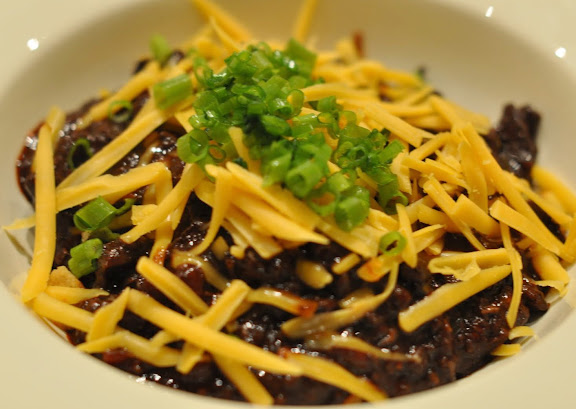 Dan is more of a purist, so his finished dish has a lot more Chili than mine.

Directions:
Heat a dutch oven over medium high heat and add 2 teaspoons of vegetable oil.  Cook the meat in three batches until no longer pink, approximately 6 minutes per batch, adding additional vegetable oil to the dutch oven as necessary, and transferring all meat and accumulated juices into a bowl between batches.

Add additional vegetable oil to the dutch oven, and saute the onion until barely translucent, about 5 minutes. Add garlic and jalapeno and saute until fragrant, about 1 minute.  Add chili powders, cumin, oregano and stir.  Add the beer, stir, and cook for a few minutes.

Add the browned meat, diced tomatoes (with the juices from the can) and stir.  With the empty tomato can, add two cans of water to the chili mixture.  Cut the lime in half and squeeze the juice from half of the lime into the chili.  Heat until boiling, then reduce heat and simmer the chili for an hour and a half or so.

Increase the heat to medium high.  Mix cornstarch with 2 tablespoons cold water in a small bowl until well mixed, pour into chili, and stir for a few minutes until the chili thickens.   Adjust seasoning with generous portions of salt and ground black pepper to taste.