It is late summer in the Southwest, and that means green chiles from Hatch, New Mexico are in season!  To celebrate these culinary masterpieces, many of the local grocery stores and certain Tex-Mex restaurants host Green Chile Festivals. 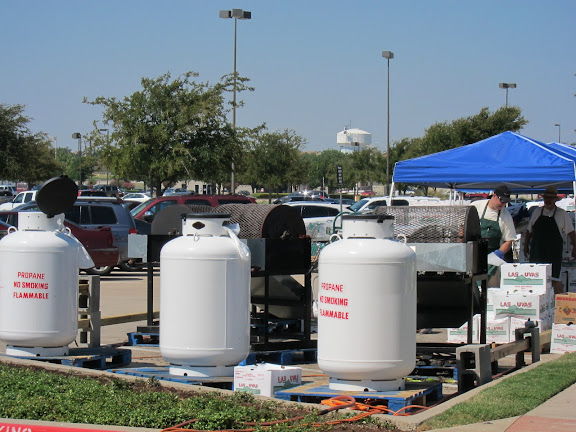 Our local Central Market usually has an area set up outside for roasting the chiles in large quantities.  It’s quite an operation, with giant propane tanks and big rotisserie-type roasters. 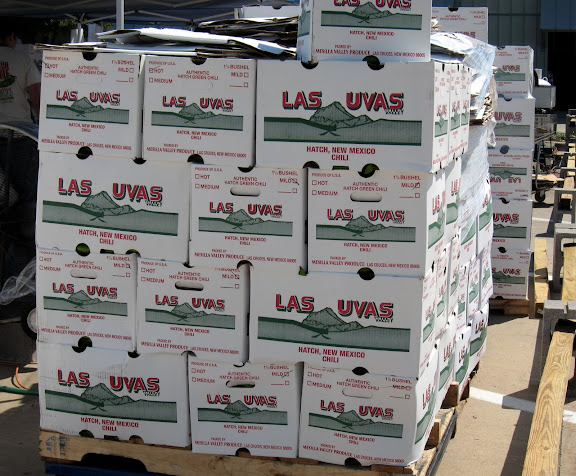 Apparently they order cases and cases of chiles.  They sell them fresh and pre-roasted, and you can purchase hot or mild (or both). 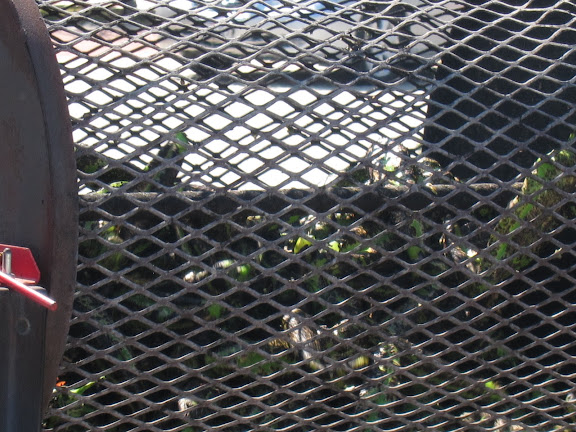 It was tough to get a good shot of the chiles as they tumbled around in the roasting thingy. 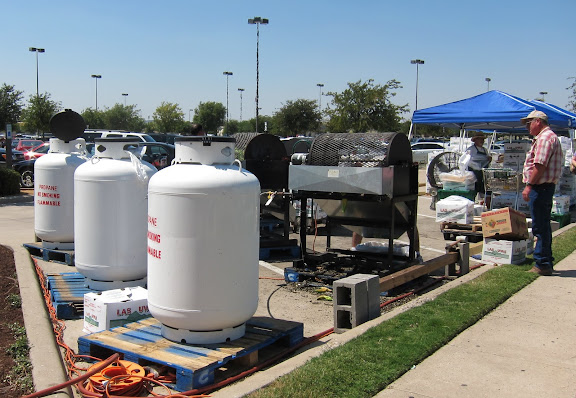 This guy seemed to enjoy watching.  (I had just been scolded by a Central Market employee for attempting to take photographs inside the store, so that is why we have so many photos of the roasting going on in the parking lot outside the store, rather than the Festival happenings inside). 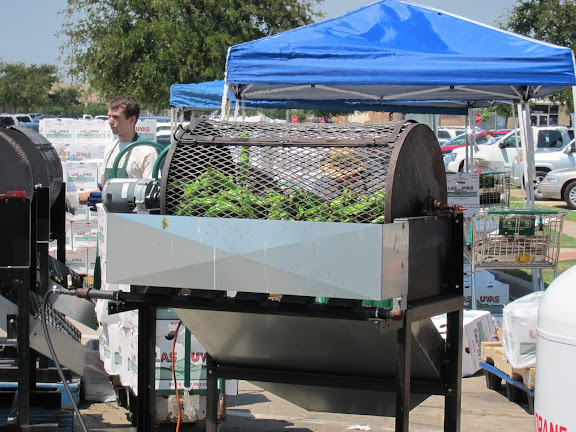 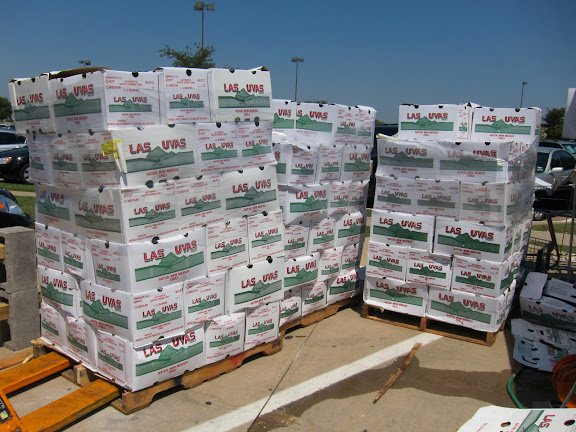 More cases of chiles, waiting to be roasted. 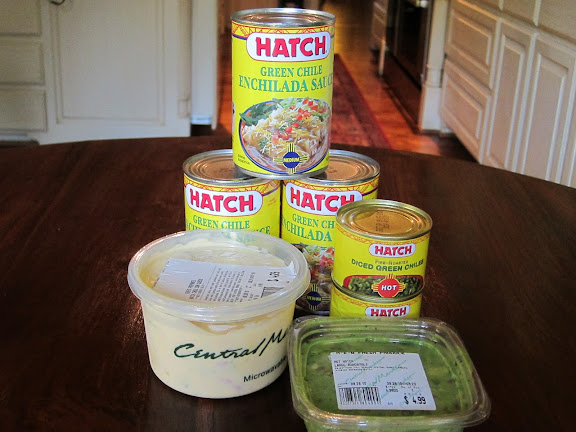 Some of our purchases from Central Market’s Hatch Green Chile Festival — queso and guacamole made with the chiles, as well as some canned chiles and enchilada sauce.  Because Hatch green chiles are only available to us for a few weeks once per year, we try to stock up.  (But the canned chiles and enchilada sauce are generally available at Central Market and other grocery stores, year-round). 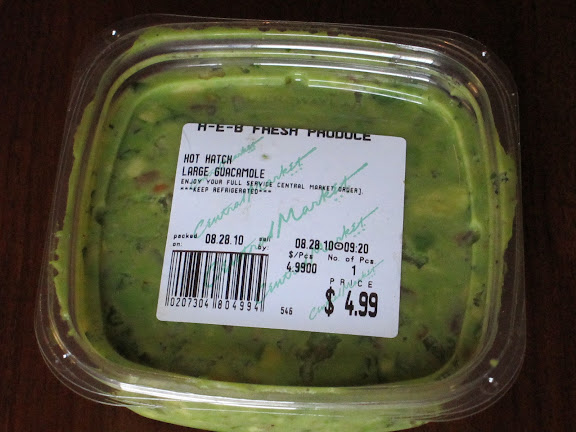 The queso and guacamole were delicious.  We had them with our Green Chile Migas the next morning (scrambled eggs with green chiles and leftover steak in flour tortillas, with the queso poured over the eggs and the guacamole as a garnish — muy bueno!) 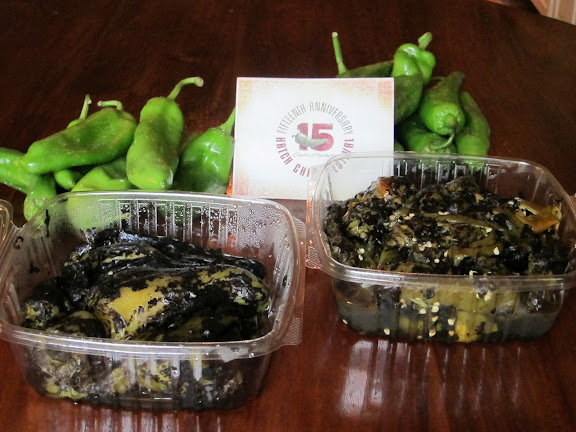 Apparently Central Market has been having Hatch Green Chile Festivals for 15 years.  We bought hot and mild, fresh and roasted chiles. 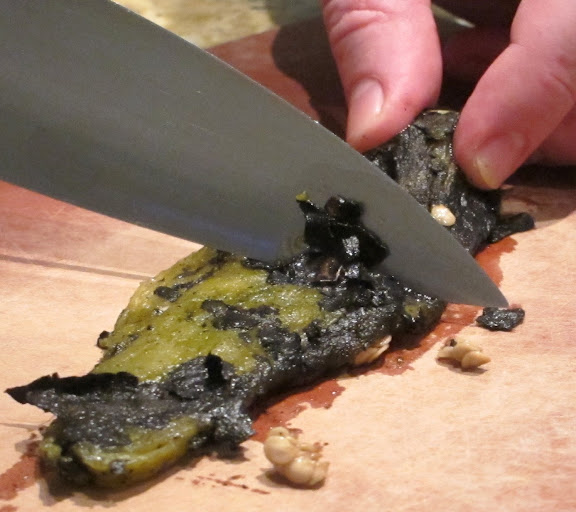 When using the roasted chile in a recipe, it is best to scrape off most of the charred skin.  Place the chile flat on a cutting board, hold it at the top, and use the back edge of the knife to gently scrape off the blackened bits. 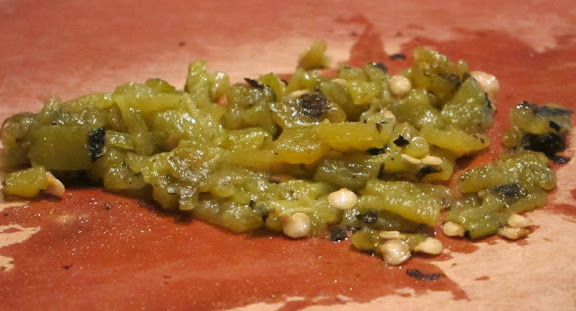 Chopped up chile.  Note that we did not remove the seeds before chopping.  You can, but we don’t think it makes much difference (unlike with a jalepeno, where you’ll want to remove the seeds if you want it to be less spicy).   Chopped up green chiles can be sauteed in a small amount of olive oil with garlic and served on top of just about anything, including Green Chile Cheeseburgers. 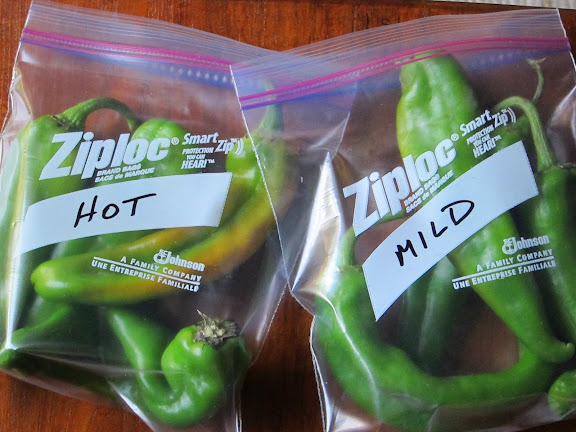 We froze the fresh and roasted chiles to use throughout the coming months.  We separated the fresh ones by hot and mild — depending on the recipe, we may want to thaw one of each. 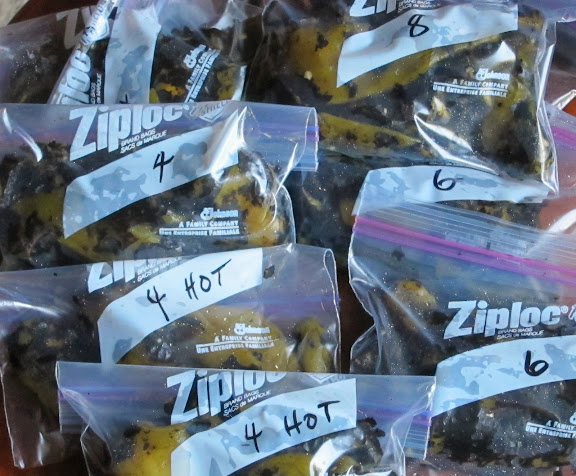 We mixed together most of the (whole and un-peeled) hot and mild roasted chiles and put them in small airtight bags for freezing.  We kept 2 bags of hot chiles separate, to use in the recipes that call for more spice.  We labeled the bags according to how many chiles were in each bag, allowing us to thaw a little or a lot, depending on the recipe.  For example, we may thaw one of the bags with 4 chiles to use in enchiladas, but we would thaw a bag of 8 chiles to use in Dan’s famous Green Chile Chowder (recipe and post to come in the Fall, stay tuned!) 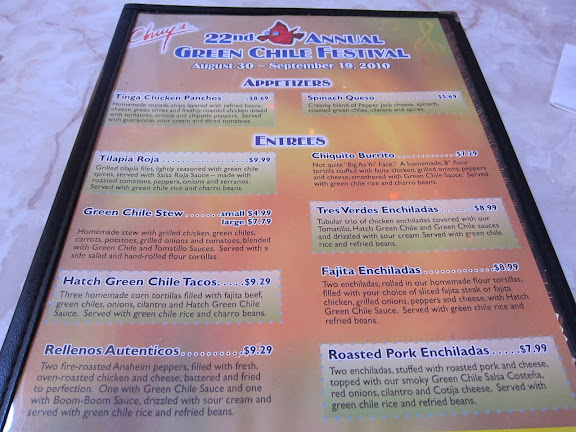 Hatch green chile time also means lunch or dinner at one of our favorite Tex-Mex restaurants, Chuy’s.  They have a festival around this time every year and offer specialty menu items incorporating the Hatch chiles.  They also sell pre-roasted Hatch green chiles there too, in case you missed them at Central Market. 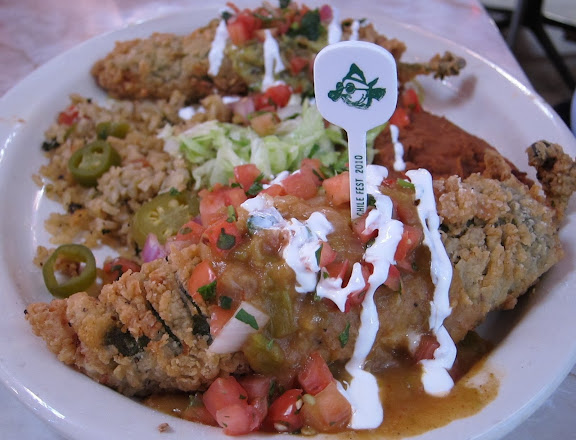 Dan had the “Rellenos Autenticos,” which incorporated the Hatch green chiles in the sauce (not to be confused with the chile part of this “chile relleno,” which is actually an Anaheim pepper). 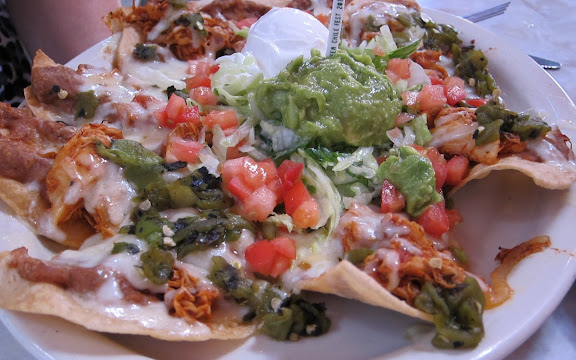 I had the “Tinga Chicken Panchos,” which were topped with chopped Hatch green chiles, among other delicious ingredients. 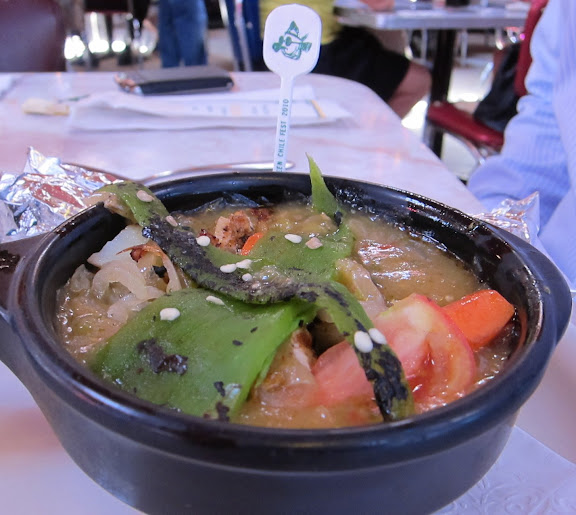 Dan also tried the “Green Chile Stew.”  I had a taste and it was good, but not anywhere near as good as Dan’s Green Chile Chowder (we will make it and post it soon, promise!)

Thus ends our Hatch Green Chile Review.  But the chiles themselves may still be available at certain places – Central Market still had a few last weekend and Chuy’s Green Chile Fest goes until September 19.  Go get some!