One of the biggest challenges in our menu planning is trying to find fish dishes that Dan and I both enjoy.  He’ll eat just about any type of fish, prepared in a variety of ways, but I’m picky about fish and usually only like it if it doesn’t taste like fish and has some sort of sauce or salsa to distract me from the fact that it is fish.  (I’m easy like that.)  We also try to make sure the sauce or other fish disguisers aren’t so unhealthy as to cancel out the health benefits of eating fish in the first place.  We found this swordfish recipe in one of Mario Batali’s cookbooks and liked the flavor of the (relatively) simple barbecue sauce that complemented but didn’t overpower the swordfish.  An added bonus is that Chef Batali included a recipe for a delicious olive and cucumber salad to accompany the fish and further mask any “too fishy” flavor.  The salad was really good as a side dish (post coming soon!), but not necessary as a topping because the swordfish wasn’t fishy at all and had a subtle savory flavor from the barbecue sauce. 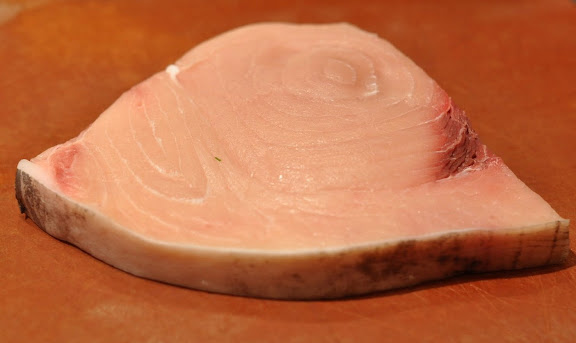 Prepare the swordfish by rinsing it and patting it dry.  Until recently, we had rarely, if ever, cooked swordfish.  Not for any particular reason –maybe we just never found a recipe we wanted to try.  But we’re glad we tried this one because we really liked it and discovered that swordfish is super easy to grill.  It’s not the cheapest fish out there, but it wasn’t crazy expensive either.  Chef Batali says that swordfish should be easy to find in the summer, but that mako shark would also work well in this recipe and costs less. 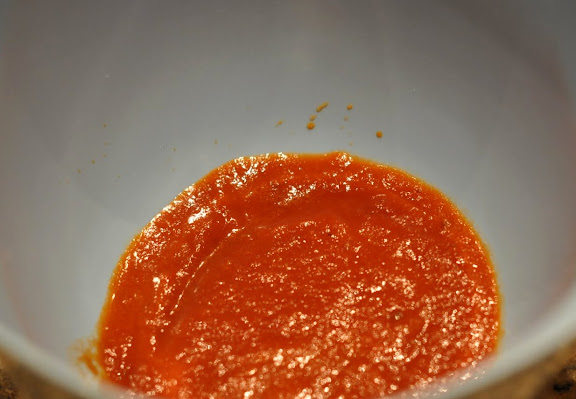 The main component of the barbecue sauce is a basic tomato sauce.  Chef Batali’s tomato sauce recipe calls for onion and garlic cooked in olive oil until soft, then add thyme and finely shredded carrot and cook for about 5 minutes.  Add crushed tomatoes, bring to a boil, then simmer for about 30 minutes.  Dan has his own recipe for a quick red sauce, and a few months ago he made a big batch to preserve by canning it.  Since then, we almost always have an open jar in the fridge, and we used that sauce as the base for the barbecue sauce.  You could make your own simple red sauce recipe, or use your favorite store-bought variety — just make sure that it is a meatless tomato sauce without too many extraneous ingredients or flavors. 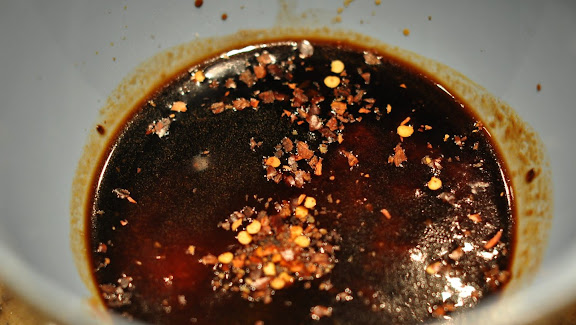 To the red sauce, add sugar, balsamic vinegar and red pepper flakes and stir it all together. 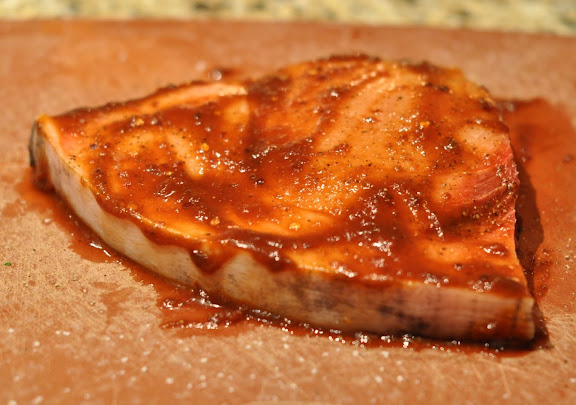 Grill the fish over medium-high heat for about 9-10 minutes total. 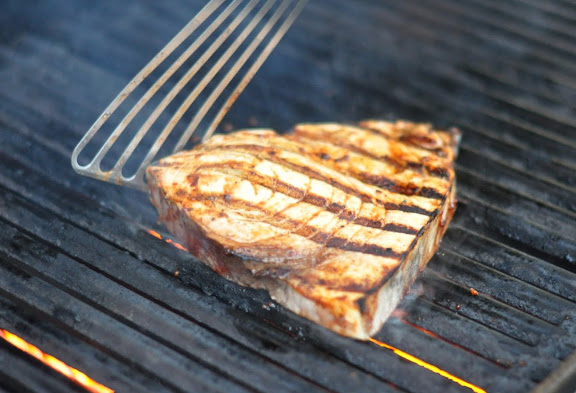 After about 4 minutes, turn the fish over.  Because the swordfish steak is a thick cut of fish, it shouldn’t stick much or at all, which makes it a lot easier to grill than thinner, more flaky types of fish. 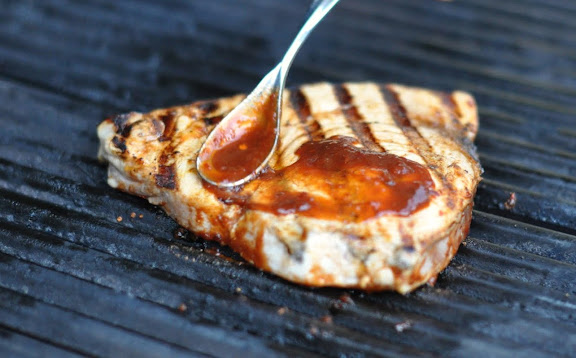 Spoon or brush additional sauce on the first side of the fish and continue cooking until it’s done — about 5 more minutes.  When you remove the fish from the grill, cut into the middle of the steak to make sure it’s done — if it looks too pink or squishy (technical grilling term) in the middle, place it back on the grill for another minute or so. 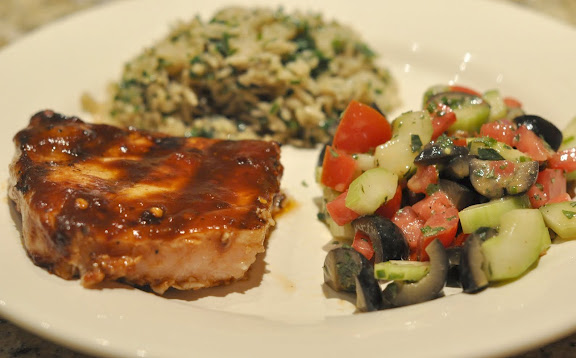 We served the swordfish with green rice pilaf and Chef Batali’s “black olive-cucumber salad with red wine-chive vinaigrette.”  The salad makes for an excellent fish disguise (similar to the tomato/olive mixture in our favorite fish dish), but the swordfish and the salad are equally good all on their own.