We discovered this salad when we found the barbecued swordfish recipe in Mario Batali’s cookbook, “Simple Italian Food.”  While both recipes are indeed simple, with flavors that complement each other nicely, we decided to post them separately since they are both delicious on their own as well.  The ingredients for the salad include cucumber, black olives, tomatoes and fresh oregano.  The salad dressing ingredients include olive oil, red wine vinegar, Dijon mustard, chives and salt & pepper.  (The extra ingredients pictured here are for the barbecue sauce for the swordfish.)  If you like olives and cucumbers at all, you’ll love this salad.  It’s a great side dish, but might also be good all on its own — add a little leftover grilled shrimp and some feta cheese and you’ve got a meal. 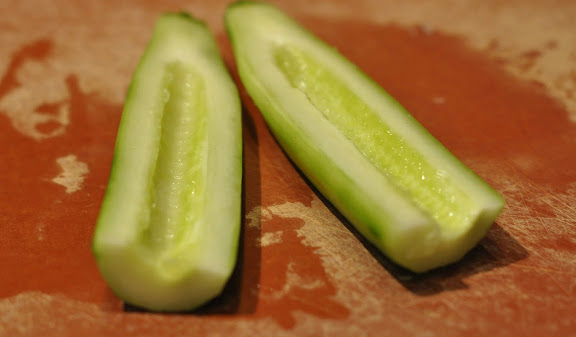 The recipe calls for an English cucumber, but a regular cucumber would also work.  English cucumbers are longer and thinner than regular cukes and are said to be more mild, less likely to be bitter, and more easily digestible.  They are also often touted as seedless, but all the ones we’ve ever used have had seeds — they’re just smaller and more compact than seeds in regular cucumbers.  Peel the cucumber, cut it in half, remove the seeds, then slice it into 1/4 inch half-moons.  Another fun fact about English cucumbers — they come wrapped in plastic and therefore, the outside skins are not waxed like regular cucumber skin can be.  So it’s not actually necessary to peel the English cukes, but we usually prefer them peeled. 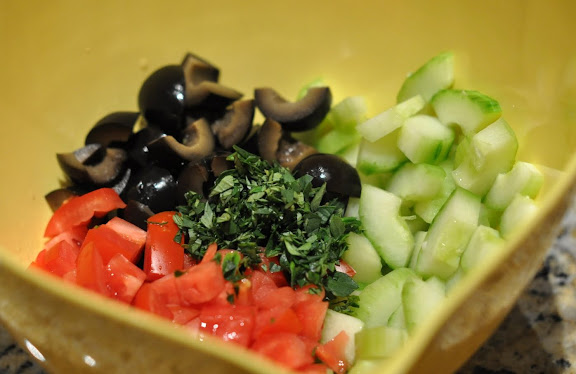 Cut the tomatoes and black olives into small pieces and chop up the oregano, then combine everything in a medium-sized bowl.  The original recipe recommends “Gaeta” black olives, but we couldn’t find them.  In the Italian food specialty section of our grocery store, we found a can of black olives from the brand Cento.  We like Cento’s canned tomatoes, so we tried their olives and were not disappointed.  They had a rich olive flavor and were firm enough to not fall apart when tossed with the other ingredients. 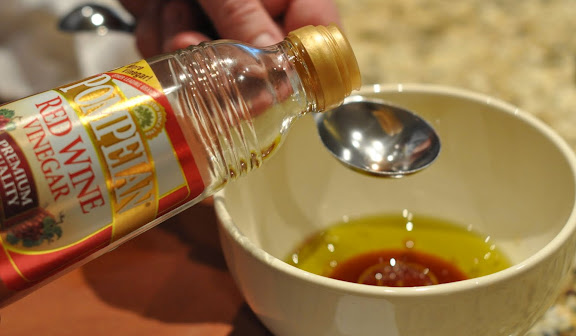 Next, mix up the vinaigrette, starting with red wine vinegar, olive oil and Dijon mustard. 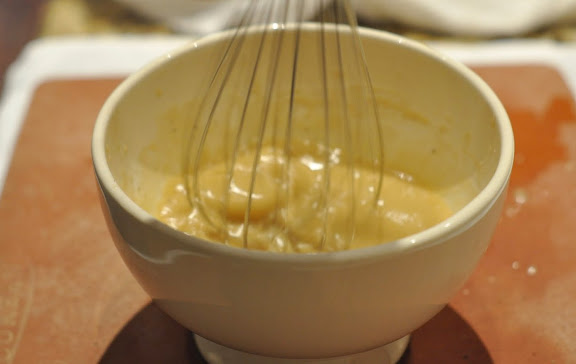 The original recipe calls for mixing these ingredients in a blender, but Dan whisked them together instead and it worked well — just whisk fast and long enough to emulsify the ingredients.  (The Dijon helps the vinaigrette to emulsify easier, so if you want to leave out the mustard for some reason, you would have to whisk the vinaigrette much longer to get the vinegar and oil to blend completely.) 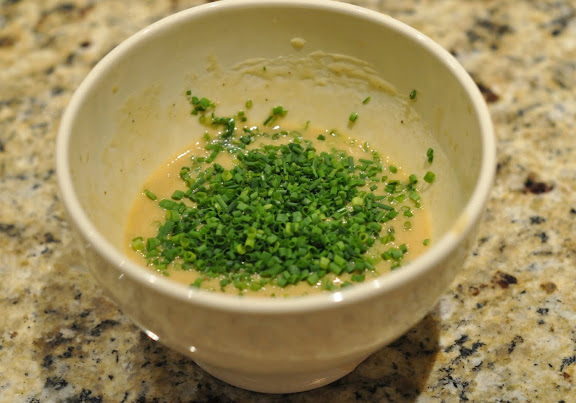 Stir in the chopped chives and season with salt and pepper to taste.  Chopped green onion tops would also work great if you don’t have any chives — just chop the green onions really tiny. 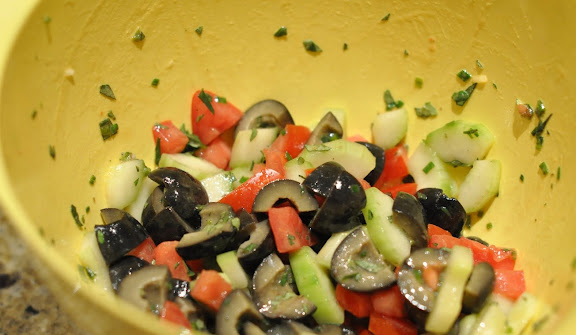 Add small amounts of the vinaigrette to the olive-cucumber mixture and toss until the salad is dressed to your liking.  This vinaigrette is delicious and versatile — we had some left over and used it on a green salad with lump crab meat and crumbled bacon for a decadent lunch one day. 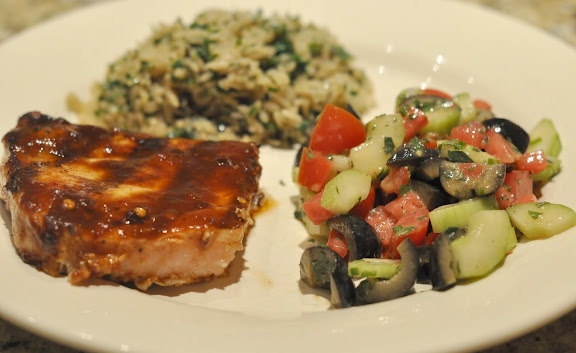 We served the salad with barbecued swordfish and green rice pilaf.  The salad was a bright and fresh addition to the meal and we’ll definitely make it again — maybe paired with a chicken or beef dish next time.