There is a huge Greek Orthodox Church near our house that has held an annual Greek Food Festival for the past 55 years.  For the 5 years that we’ve lived in our current neighborhood, we would see the signs advertising the festival each year and always mean to attend, but never got around to it, until this year.  Dan’s mom was in town this past weekend and we thought it would be a nice little outing for the 3 of us.  We were right — it was a gorgeous sunny day and we enjoyed sampling Greek food, shopping for Greek wares and touring the beautiful Orthodox church.  We’ll be back next year. 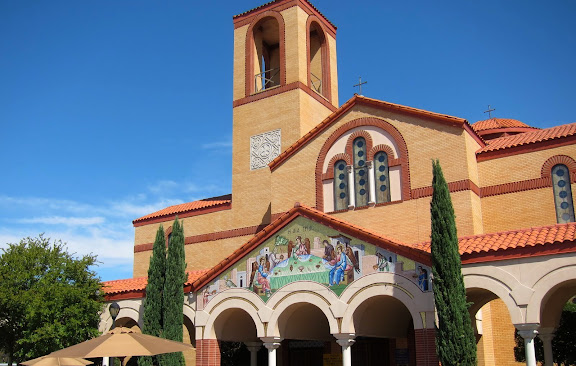 The festival was held in the courtyard area and surrounding parking lots of the church.  The church itself is a very impressive structure. 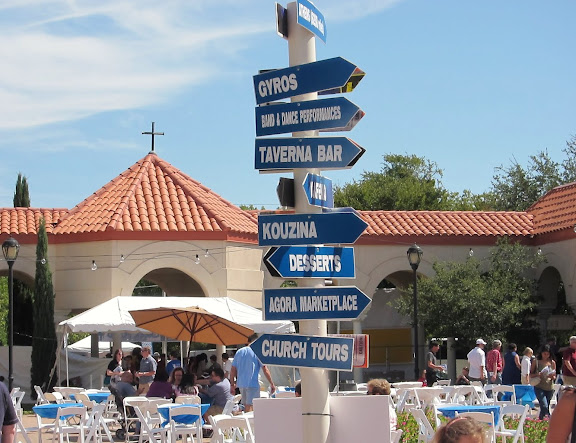 So many options, where to begin?  We decided to work up an appetite by starting with a little shopping. 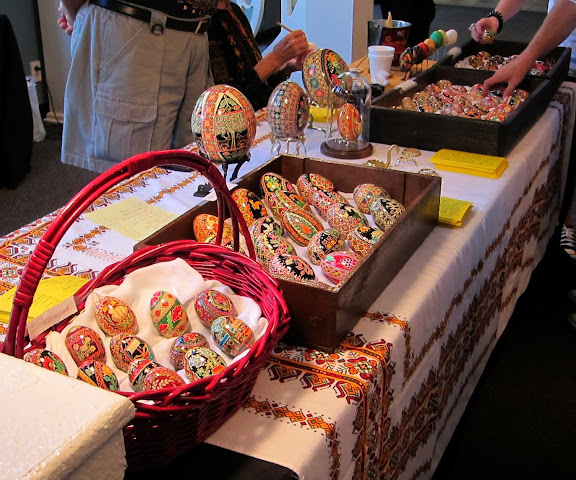 The Agora Marketplace had lots of cool vendors and stuff for sale.  There was a woman hand-painting “Pysanky” eggs that were amazing — so intricate and detailed. 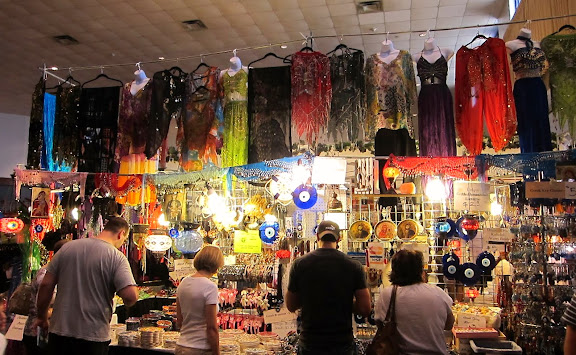 There were lots of shiny, colorful things, many of which featured the Greek “evil eye.” 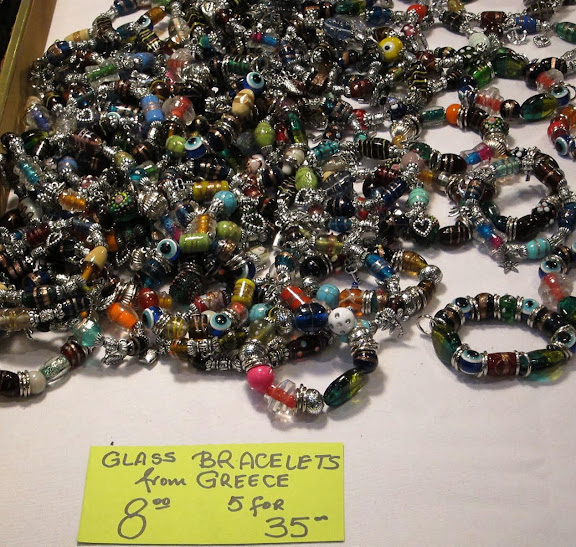 I loves me some jewels.  I could have spent a lot more time (and money!) perusing the large selection of jewelry at the festival. 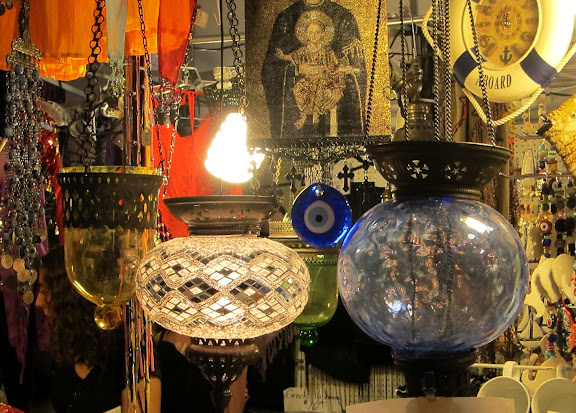 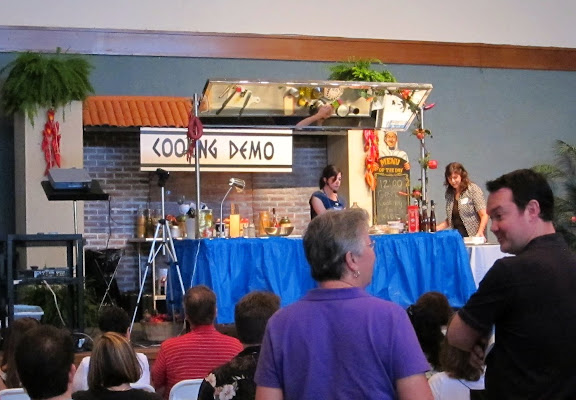 In addition to the Greek merchandise, the marketplace area featured several different Greek cooking demos throughout the day.  Dan and his mom stopped by for a minute, just long enough to realize we were all hungry and ready for the “food” part of the festival. 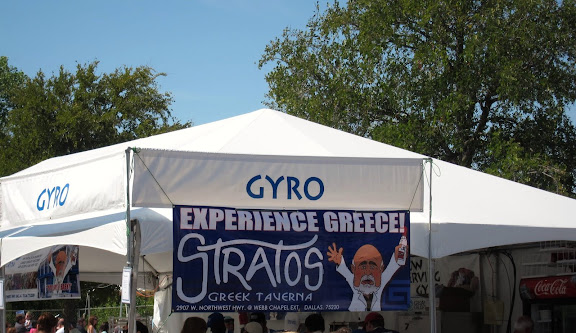 We proceeded directly to the tent featuring gyros — possibly the most popular and recognizable dish of authentic Greek food. 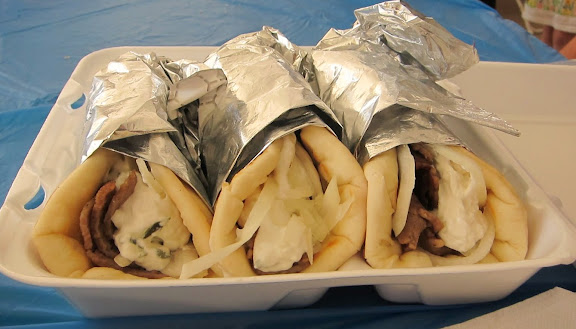 With good reason.  The gyros were delicious — thinly sliced, expertly seasoned lamb and beef with onions and cool, creamy tzatziki sauce in a warm fluffy pita. 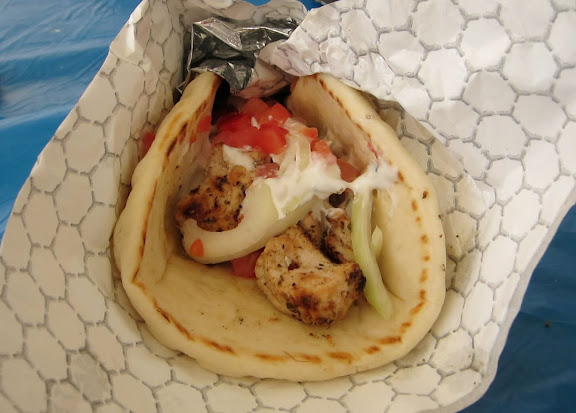 After finishing his gyro, Dan also decided to try the chicken souvlaki sandwich — “just a bite” to have a taste and get a shot for this post.  It was so good, he ate the whole thing.  The chicken was marinated “Greek-style” and grilled over an open fire, then packed in a toasty pita with onion, tomatoes and tzatziki sauce. 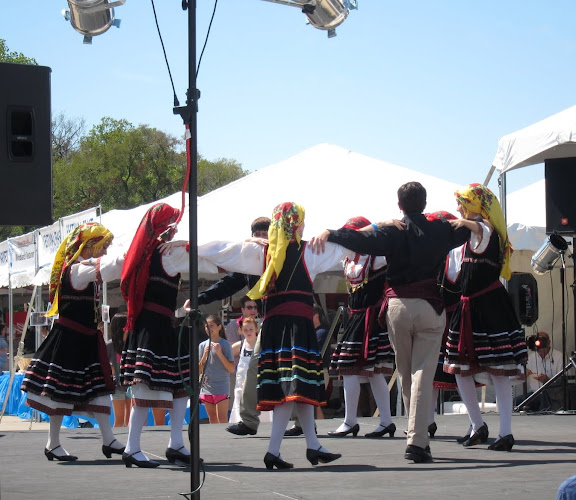 While we dined, we were entertained by the Holy Trinity Hellenic Dancers.  In between dance performances, the “To Kefi” Greek Band played “bouzouki” music.  It was really quite festive. 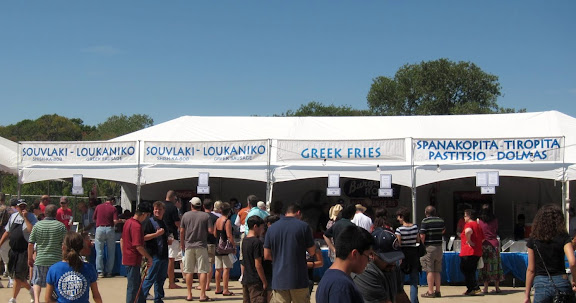 Other food options at the festival included loukaniko (Greek sausage in a pita), pastitsio (macaroni casserole with meat sauce and bechamel), Greek potato fries (fried potato strings with Greek seasonings), dolmathes (grape leaves stuffed with rice and seasoned beef), spanakopita (phyllo filled with spinach, dill and feta cheese) and tiropita (phyllo filled with 4 cheeses) — just to name a few.  They also offered Greek salad and an appetizer plate with 3 spreads, pita, olives and feta.  For an additional fee, we could have dined on “The Festival Feast,” consisting of chicken oreganato, rice pilaf, keftethes, spanakopita, tiropita, and Greek salad, but we decided to dine a-la-carte instead. 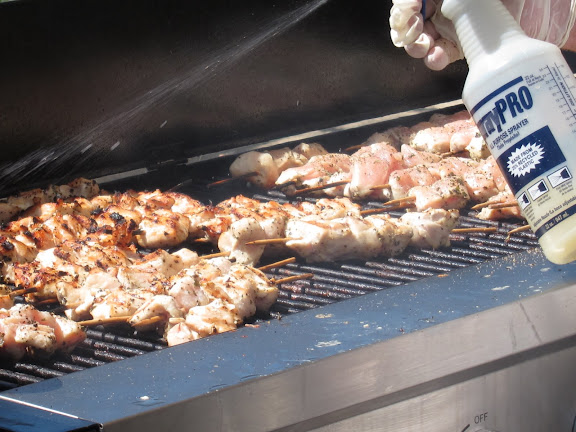 There were multiple grills going in the food area, filling the whole place with delicious grilled meat aromas.  We’re not sure what was being sprayed on these particular skewers, but possibly the “Greek-style” marinade for the souvlaki? 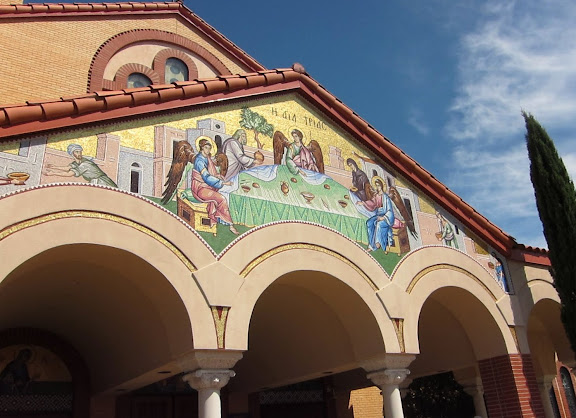 With our bellies full, it was time to tour the church. 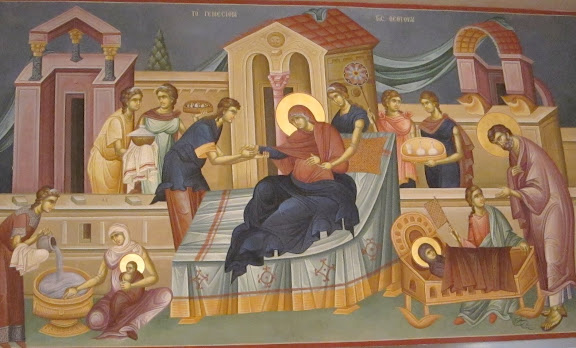 The church is filled with gorgeous murals, poorly captured by the little point-and-shoot camera I was using that day.  The colors were so bright and rich. 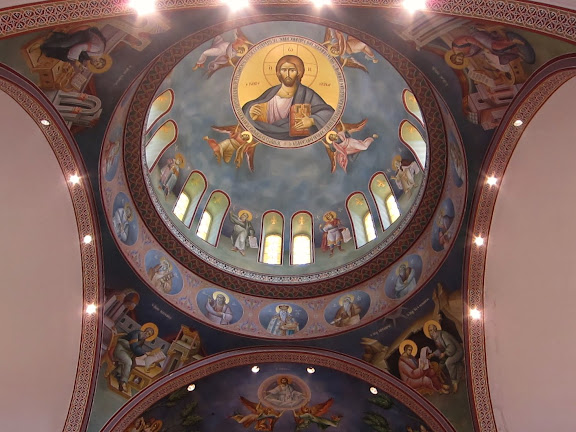 The church features a very impressive dome, with more beautiful mural artwork (again, poorly captured here.)  You really have to see it in person to appreciate the gorgeous colors and iconography.  Truly stunning. 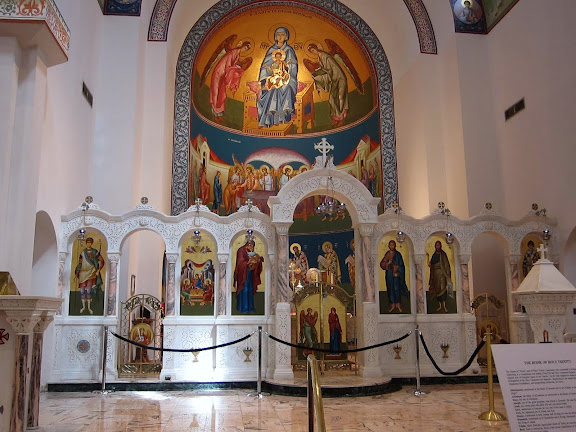 The altar is also stunningly beautiful. 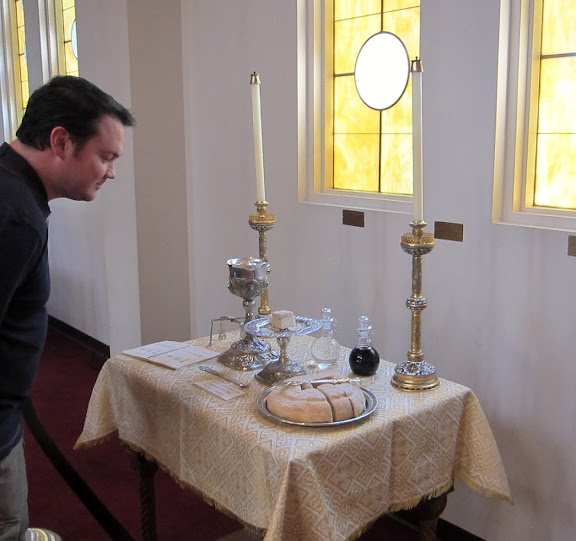 After admiring this display, Dan turned to his mom and me and asked “Anybody got any peanut butter?” 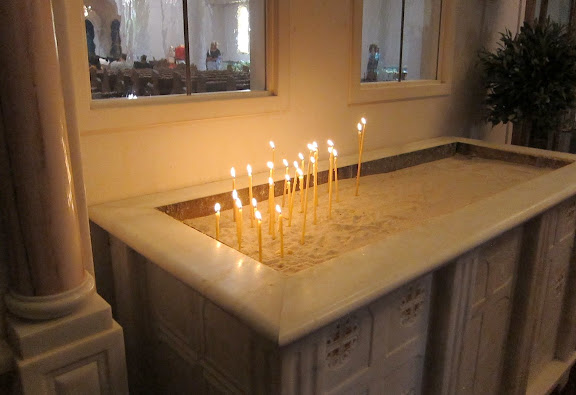 On our way out of the church, we stopped to light prayer candles and have a moment of reverence.  As we exited, Dan asked if we knew how they make holy water.  The answer?  They boil the Hell out of it.  (In Dan’s defense, his pastor from childhood told him that joke.  So he says.) 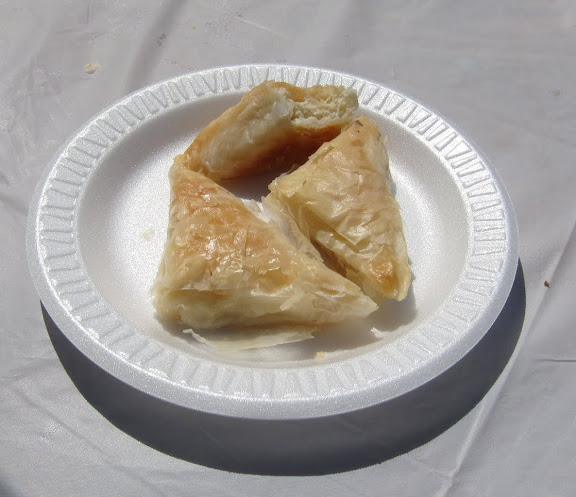 All sacrilege aside, we decided to sample a few more bites before calling it a day.  We all enjoyed the tiropia — with its feta, parmesan, cottage and cream cheese filling wrapped in layers of buttered phyllo — it was light and savory. 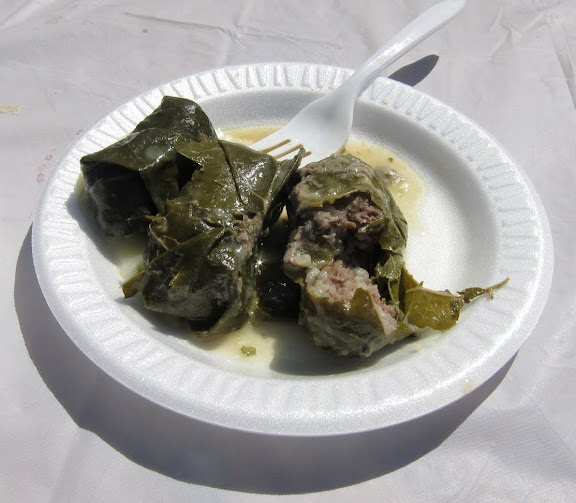 We also tried the dolmathes — grape leaves stuffed with a rice and seasoned ground beef mixture and topped with “Avgolemono Sauce.”  The filling was well-seasoned and tasty, and we really liked the light, lemon-butter sauce.  But I think grape leaves may be an acquired taste/texture. 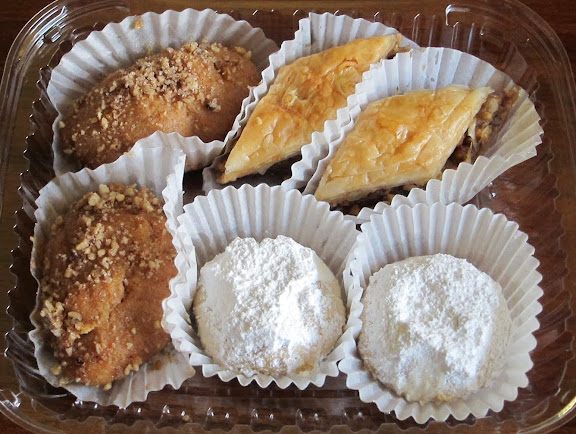 Before leaving the festival, we picked up a sampler of pastries from the Agora marketplace.  The 2 pastries on the left are fenekia (honey-dipped cookies sprinkled with walnuts), the 2 on the top right are baklava (layers of phyllo filled with nuts, sugar and cinnamon) and the 2 on the bottom right are kourambeithes (butter cookies with powder sugar topping.)  The baklava was our favorite.  Overall, we had a great time at the festival, and tasting all the different dishes has inspired us to try to make some of these Greek delicacies at home.  Opa!