Ina Garten does it again.  Hers might be the most-used cookbooks we own — just about all of them have multiple pages tagged with recipes we have tried and enjoyed.  And her books are the ones I often go to when I feel like we’re in a cooking rut, which is how I found her recipe for mushroom lasagne.  Traditional lasagne with red sauce, italian sausage and ricotta cheese is one of Dan’s specialties, and we have it all the time.  So I thought it would be interesting to try a completely different lasagne — with mushrooms instead of meat and cream sauce instead of tomato.  The result is somehow rich yet light at the same time, hearty and delicious. 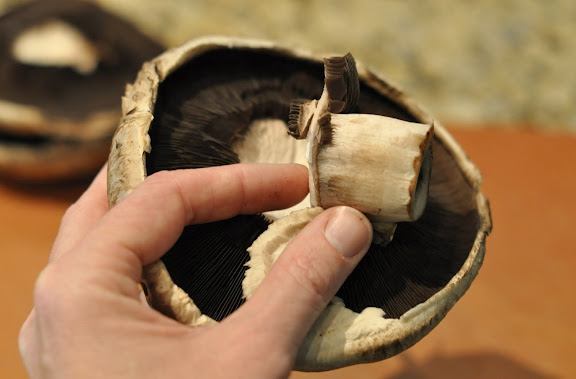 Because I made the lasagne myself on this night and I’m not the most confident of cooks, I thought it would be helpful to get as many of the ingredients ready as possible before tackling the sauce.  Prepare the mushrooms by removing and discarding the stems… 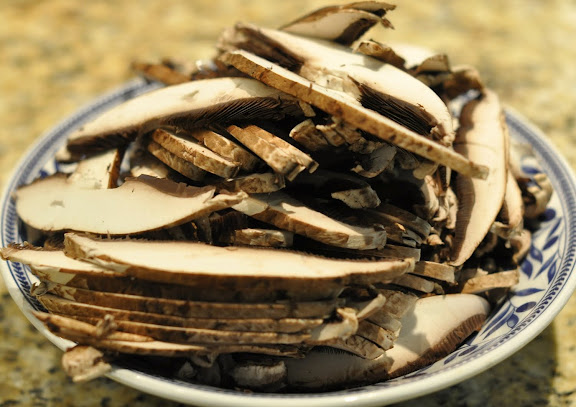 …then slice them into 1/4 inch thick pieces.  Set the mushrooms aside to cook just prior to assembling the lasagne. 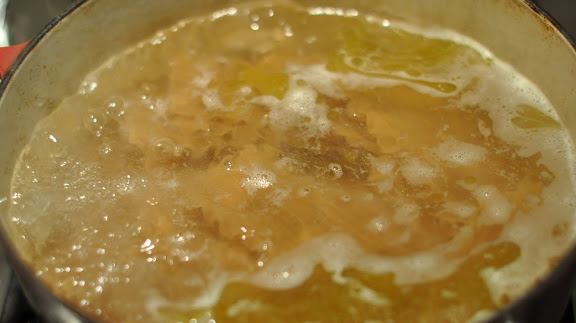 Boil the dried lasagne noodles for about 10 minutes in a large pot of water with a tablespoon of salt and a glug of olive oil.  We used whole wheat noodles and couldn’t really tell a difference between those and regular noodles in the finished product. 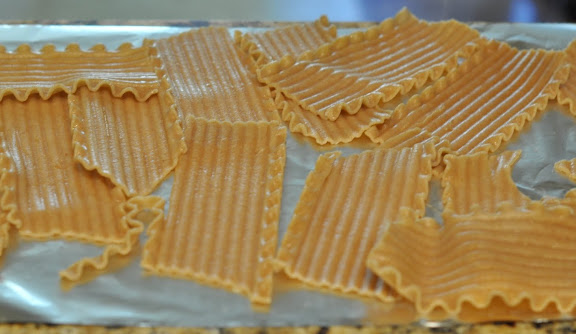 Drain the noodles and set them aside.  I read somewhere that laying the hot noodles out on a sheet of foil will help keep them from sticking to each other as they cool.  They never really seemed all that sticky, so this was probably unnecessary.  Cook and learn, right? 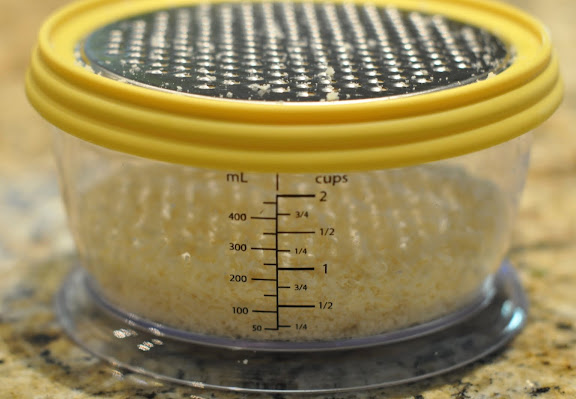 Grate a cup of parmesan cheese.  Check out this handy tool with a grater on top (comes with several tops of different sized graters) and measuring cup on the bottom.   Or, you could throw several chunks of parmesan cheese in the food processor, hit “pulse” a couple of times and get the same result in about 15 seconds (with no hand cramping or knuckle scraping). 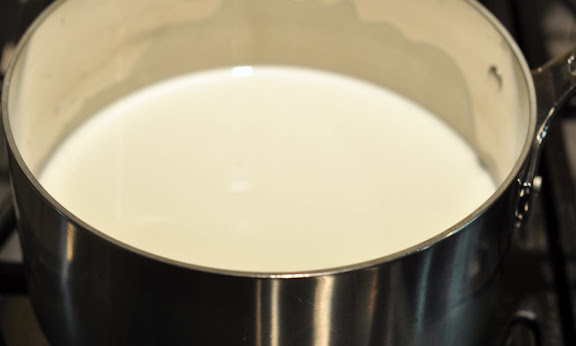 Start the sauce by bringing milk to a simmer in a saucepan, then set it aside. 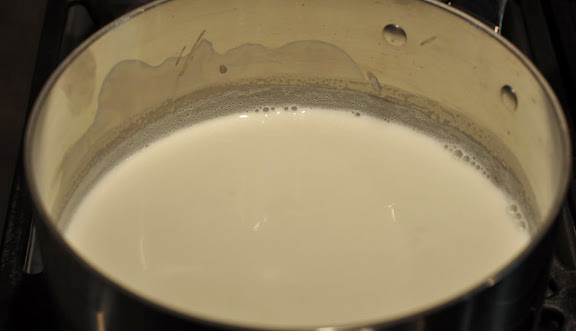 I wasn’t really sure what simmering milk should look like (less than a rolling boil, I guess?), so when I started to see little bubbles along the edges, I called it good and turned off the heat. 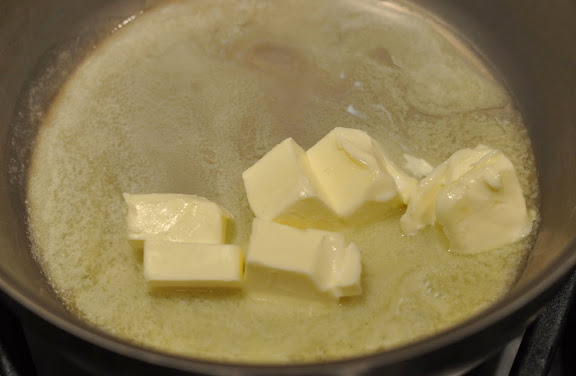 While the milk heats, melt the butter in a separate saucepan. 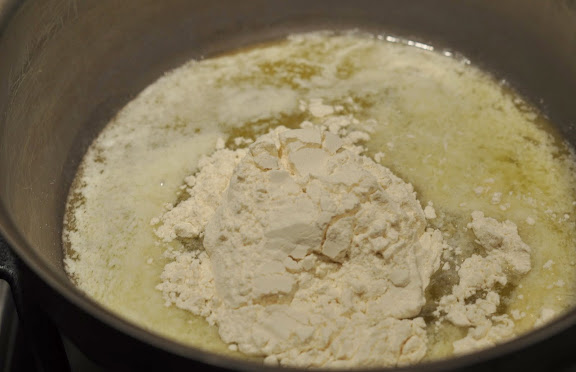 Once the butter melts, add the flour and cook over low heat for about a minute, stirring constantly. 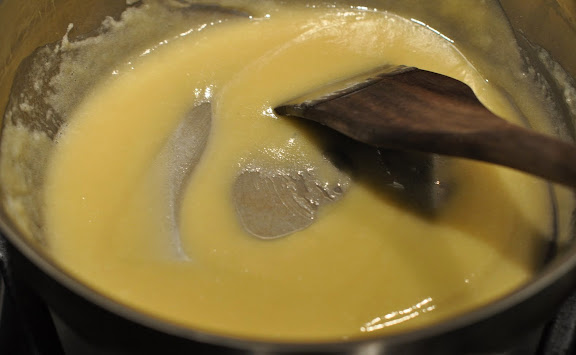 After about a minute, the butter-flour mixture looks like this. 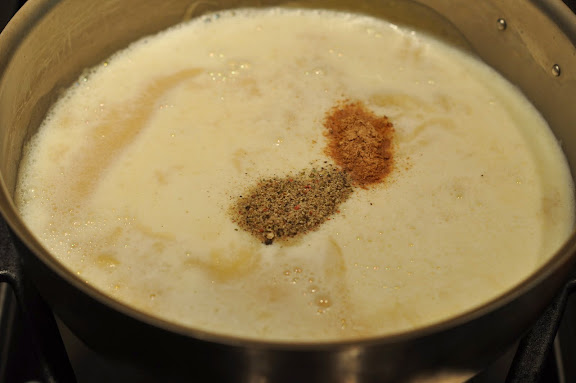 Add the hot milk to the butter-flour mixture, then add salt, pepper and ground nutmeg.  Stir everything together with a wooden spoon. 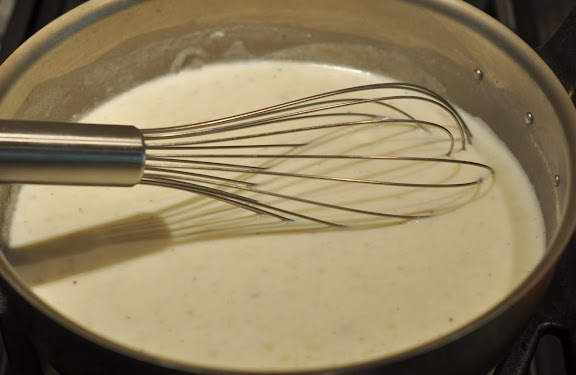 Then switch to a whisk and stir often while cooking over medium-low heat until the sauce thickens — about 3-5 minutes. 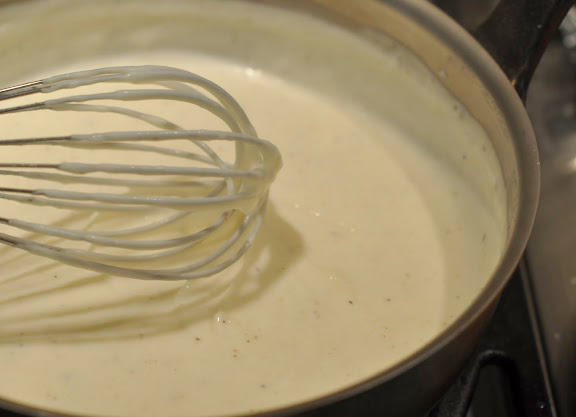 Don’t forget to taste the sauce when it’s done, and adjust the seasonings if necessary.  Set the finished sauce aside off the heat. 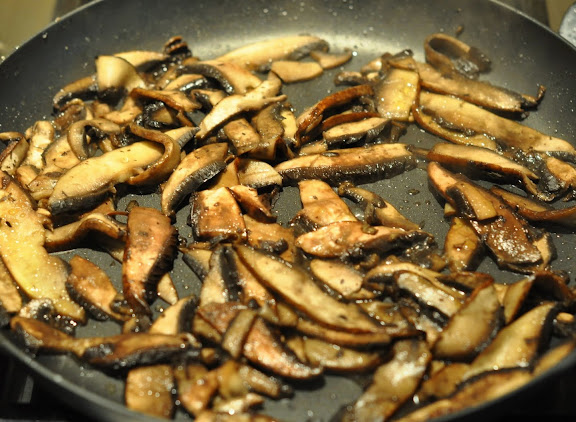 Heat a couple of tablespoons of oil and butter in a large saute pan, then add half of the mushrooms and a little salt and cook over medium heat until the mushrooms are tender and release some of their juices — about 5 minutes.  Turn or toss the mushrooms often so they cook evenly.  Set aside the cooked mushrooms and saute the remaining mushrooms the same way.  (This is the point in reading this post where Dan begins trying to figure out how to streamline the recipe by using fewer pots and pans.  He’s good like that.) 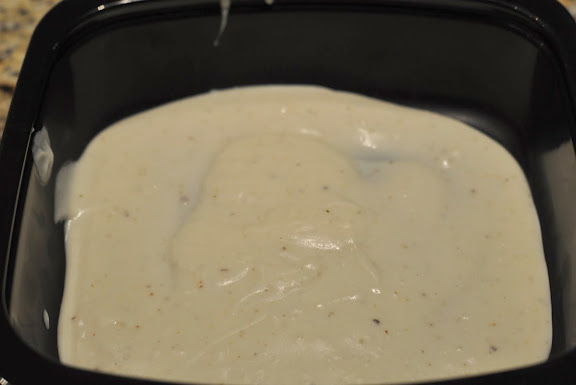 Start building the lasagne by spreading a thin layer of sauce in the bottom of a baking dish. 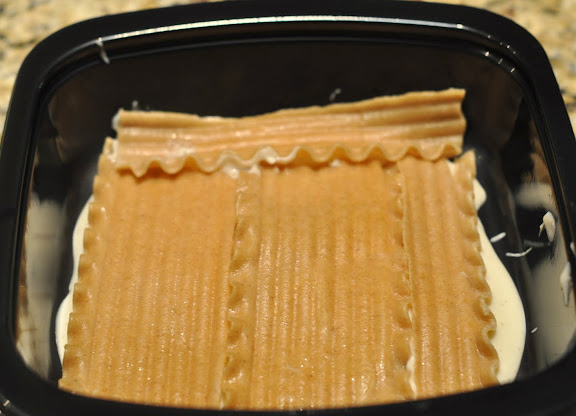 Add a layer of noodles. 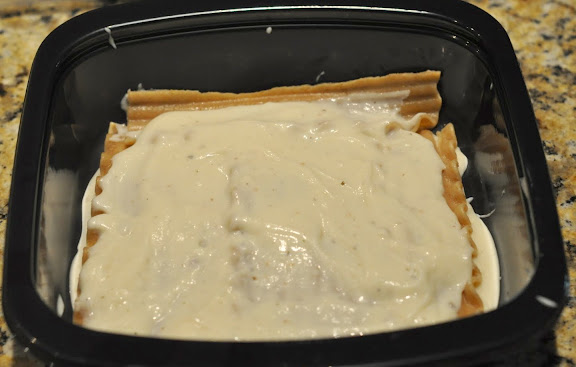 Then add another layer of sauce. 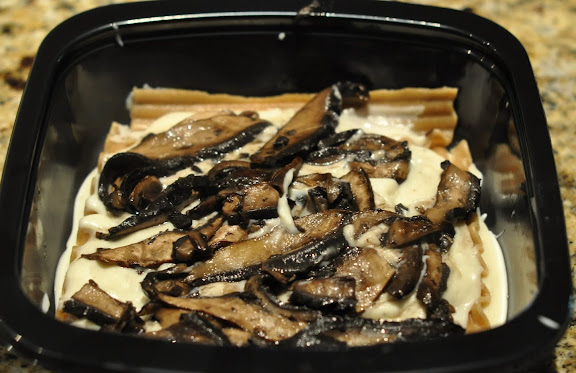 Next add the mushrooms. 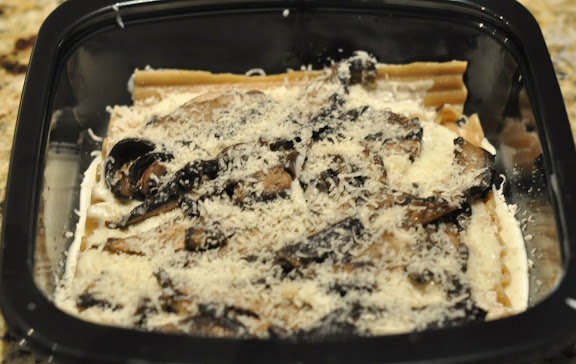 And sprinkle on some parmesan cheese.  Rinse and repeat two more times — noodles, sauce, mushrooms and parmesan.  Bake the lasagne in the oven preheated to 375 degrees until the top is browned and the sauce is bubbly — about 45 minutes. 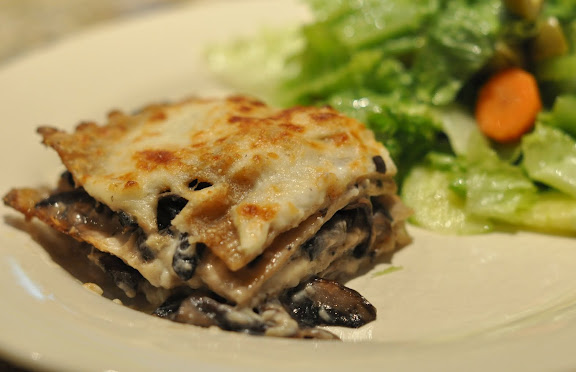 Allow the lasagne to sit at room temperature for about 15 minutes before cutting and serving.  We served ours with a simple garden salad. This is a great recipe when you’re in the mood for something a little different. It’s also good for entertaining because you can make it ahead of time and refrigerate it until you’re ready to bake it about an hour before you plan to serve it. You can also build two pans at the same time, then cook one and freeze the other to cook another time.