Some of the best things in life are the most simple.  Dan and I recently took a wonderful trip to Northern California, including a glorious long weekend in Napa Valley.  We took tons of photos, and plan to share each and every one of them.  Just kidding, we won’t be *those* people.  But we will have a couple of posts sharing some California goodness, starting with this one covering an amazing – yet simple – dinner we had at Ad Hoc, a Thomas Keller restaurant in Yountville, CA. 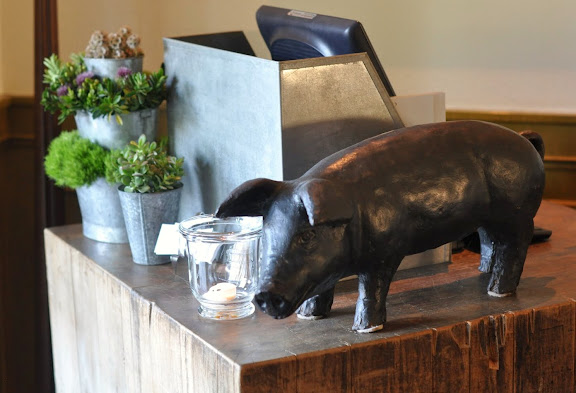 The story behind Ad Hoc is that it was originally intended to be a temporary restaurant while its creators worked on the design for the permanent eatery that would eventually occupy the space.  Ad Hoc’s stated purpose is “for temporary relief of hunger,” and this purpose is fulfilled by a four-course family-style menu that changes every day.  This concept and the temporary restaurant were so popular that they became permanent.  We don’t know the story behind the pig, but it seems to be a mascot of sorts.  I have a little wooden pig that sits near the umbrella stand by our front door (and no story behind it — I just thought it was cute & whimiscal), so I can relate. 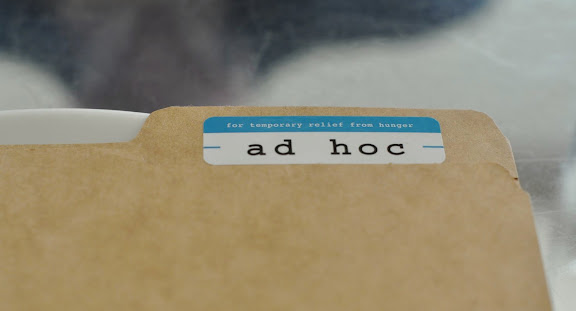 We loved the simplicity of Ad Hoc’s menu — four courses, no choices.  The menu itself gives a nod to the temporary, project-in-process style of the restaurant’s original theme — it comes in a manilla folder with removable pages showing the night’s courses on one side and the multi-page, extensive wine list on the other side. We are big fans of Thomas Keller and have been to his restaurants Per Se in New York and Bouchon in Vegas.  We also have most of his cookbooks, which we consider works of art.  Dan even stood in line once for several hours to meet Chef Keller and get an autographed copy of his book “Ad Hoc At Home.”  So, we knew that we would be in good hands and the four courses would be delicious, no matter what they were.  Plus, it was fun to stalk the restaurant online for several days leading up to our reservation, watching the menu change and wondering what they would be serving on our night.  Dan was a tiny bit disappointed to see fried chicken on the menu a couple nights before we went — we had previously tried the fried chicken recipe from the Ad Hoc cookbook and it was incredible. 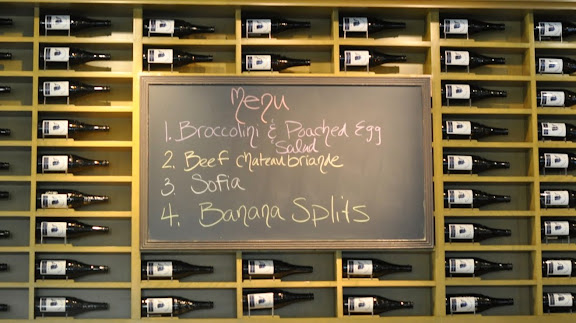 Although there was no fried chicken on our night, we were pretty excited about the menu nonetheless.  Dan has been practicing his egg poaching skills lately, and we have a broccolini dish we love, so we were especially interested in the first course.  And Dan was practically beside himself with anticipation about the dessert.  He has a sweet tooth that he rarely indulges, and the banana split is one of his happy places.  I have only seen him eat this dessert one other time, and he didn’t speak from the first banana bite until the last drop of ice cream was spooned from the bowl.  In Dan’s world, the answer to “Would you like some ice cream?” can be nothing other than YES. 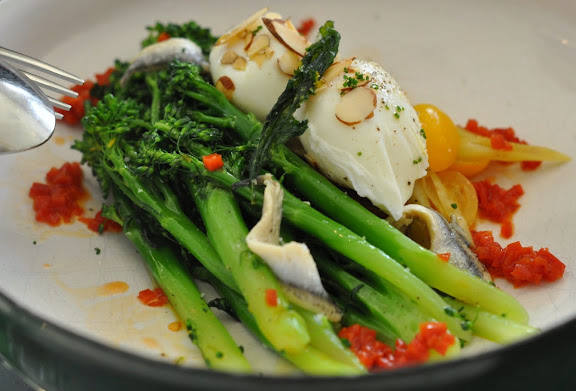 We really enjoyed the family-style service at Ad Hoc.  They brought out our first course in a cast iron dish from which we could serve our own portions on our plates.  Looking around the restaurant, we noticed that they use all different kinds of serving dishes — it’s not all matchy-matchy — which just added to the family-style ambiance.  No matter the size of your dining party, it almost feels like you’re at a big family dinner (with relatives you’ve never met before.) 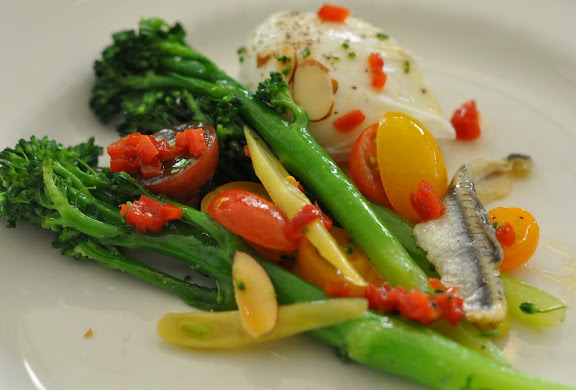 The broccolini was sauteed perfectly — still had a little bit of crunch and good saute flavor.  It was paired with tomatoes (from the garden on the restaurant property), wax beans, marinated anchovies and a beautifully poached egg with almond slivers.  The whole dish was dressed with a very light lemon piquillo (a type of pepper) dressing.  Gorgeous on the plate and even better on the palate.  The yolk from the egg added another dimension of flavor that took the salad to a whole new level.  We never would have thought to serve a poached egg with vegetables, but we also never would have thought a vegetable salad could be so decadent. 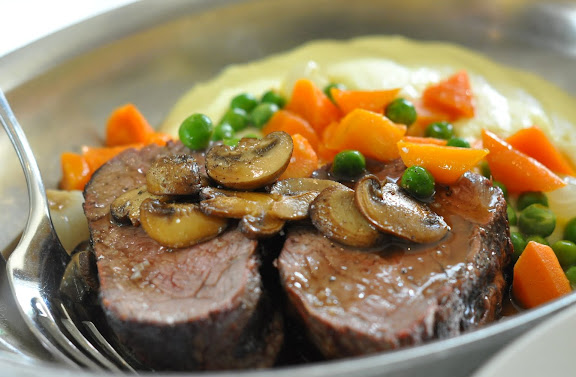 Our second course was beef chateaubriande in red wine mushroom jus, served with cipolini mushrooms and peas & carrots.  Among the best beef dishes we have ever tasted.  For the best bite — load the fork with a small piece of beef, a mushroom and an onion sliver, then a quick swipe of potato and jus.  Amazing.  Dan enjoyed the peas and carrots too, but I don’t prefer them.  I have a texture issue with peas and cooked carrots do not taste like candy, despite what your mom may have told you. 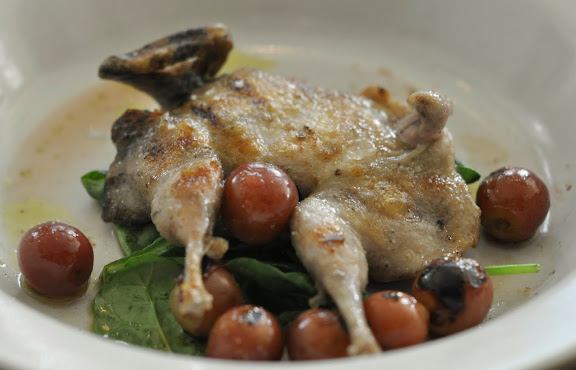 Bonus second course option!  Ad Hoc offered an additional second course that night — grilled quail.  How could we refuse?  And if you know us at all, you know that we didn’t.  The quail was served on baby spinach — barely wilted from the heat and juices of the resting quail — and “blistered” grapes.  We asked our (wonderful and very knowledgeable) waitress how they cooked the grapes and she told us that they were grilled just until the skin started to blister.  We actually tried this at home the other night and they turned out great.  We soaked thin bamboo skewers in water for about 30 minutes, threaded on the grapes and grilled them over medium-high heat for about 3 minutes, turning often.  Grilling them brings out their sweetness, and they are an easy, simple and unique side or garnish for grilled or roasted poultry, especially if the poultry has a bit of spice or kick to it.  This second, second course was light, tasty and complemented the more rich beef course very well. 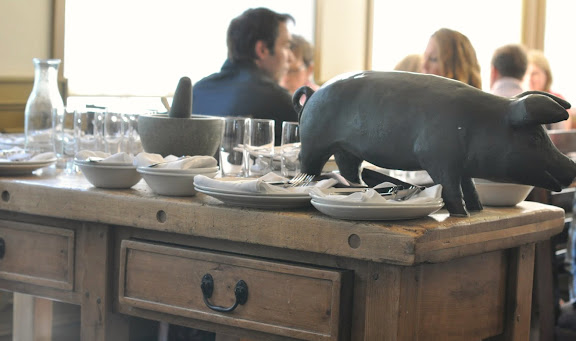 While we dined, I was lucky enough to have a perfect view of the center serving area, where the wait staff got the flatware and plates to replace the used ones throughout each diner’s meal.  It was a treat to watch — they efficiently and seamlessly worked together to whisk away the dirty and replace it with fresh, without the clatter and clamor you might expect from re-setting multiple tables four times for each meal.  The open storage and communal wait service only added to the comfortable family-style atmosphere.  And that’s some pig. 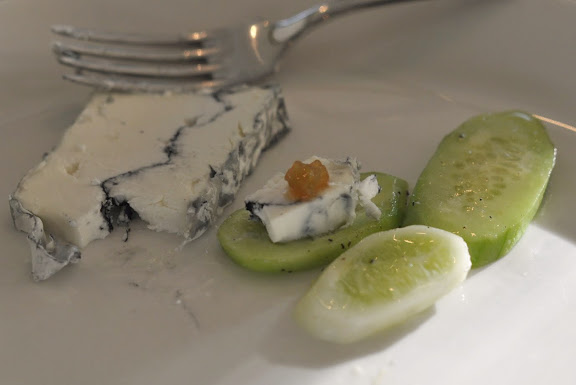 The third course was a lovely goat cheese served with cucumber chips and some sort of fennel-based jam.  This was a nice, palate-cleansing course, with the soft cheese, crisp cucumber and slight bite from the fennel. 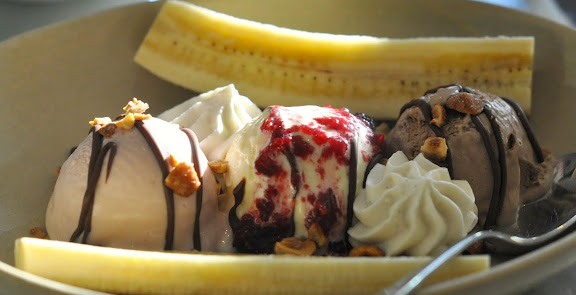 Finally, the banana split — appropriately dappled with sunlight, as if sent from heaven.  And that is exactly how it tasted.  Just-ripe bananas, set alongside raspberry, vanilla and chocolate ice cream, drizzled with chocolate and berry sauces, dotted with fresh whip cream and sprinkled with toasted nuts.  YES, PLEASE.

We thoroughly enjoyed our dinner at Ad Hoc and highly recommend you go there if you’re ever so blessed to be in Napa Valley.  It doesn’t get much better than simple dishes prepared elegantly, served in a simple yet beautiful setting that feels like family and home.