Homemade baked beans take a long time to prepare.  A really, really long time.  Sure, you could always opt for the canned baked beans available at the grocery store, but the homemade variety have a lot more flavor, and you have the satisfaction of making them from scratch (or so Dan tells me.)  Because we had already set aside a Major Block of Cooking Time this recent Memorial Day for smoking BBQ ribs, we decided to make a batch of baked beans as well.  The extra cooking time was well worth it.  We might not reach the same conclusion in a blind taste test, but we thought the homemade beans tasted way better than any of the canned versions we’ve tried.  (You may borrow the blind taste test idea as a party trick for your next cookout.  You’re welcome.) 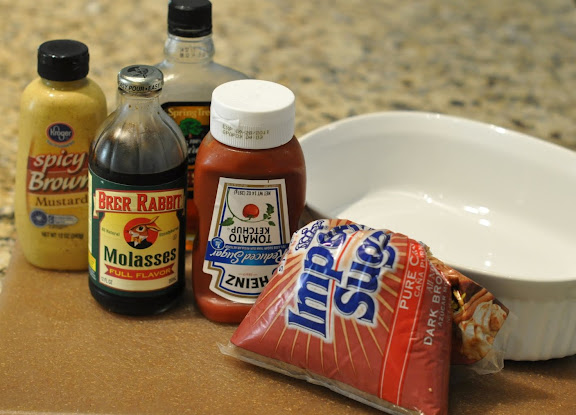 We adapted these baked beans from a recipe we found on Epicurious.  The ingredients include brown sugar, spicy brown mustard, molasses, ketchup, maple syrup and salt & pepper.  Ingredients not pictured are beans (navy or great northern — we used navy) and bacon. 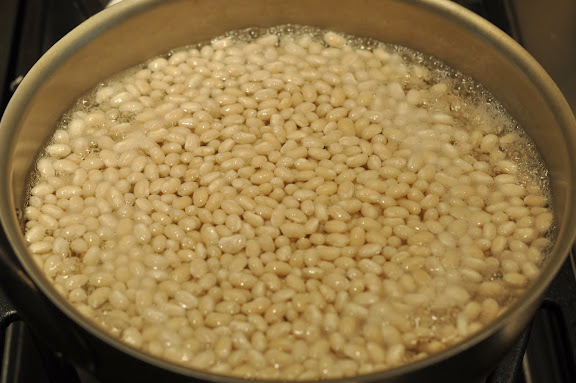 Sort the beans and discard any small stones or weird looking beans.  Add the beans to a medium-sized pot and fill with water until the water level is about 2 inches above the beans.  Bring the water to a boil, then reduce heat to medium low.  Simmer the beans, uncovered, until they are tender — about an hour. 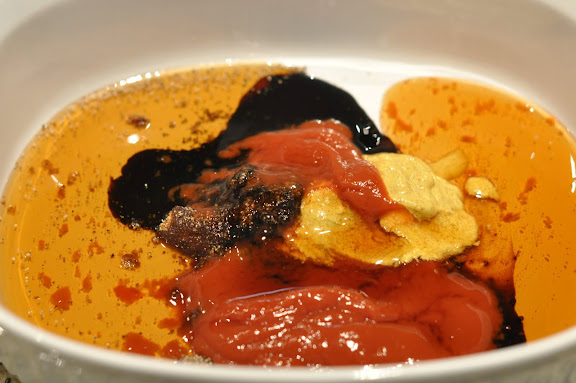 In an oven-safe, deep baking dish (preferably one with a lid), combine the brown sugar, mustard, molasses, ketchup, maple syrup and salt & pepper. 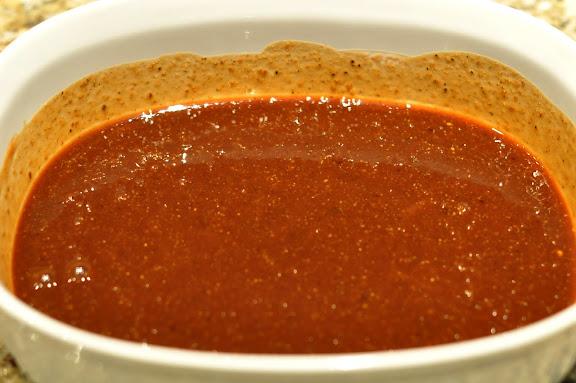 Mix all the ingredients together. 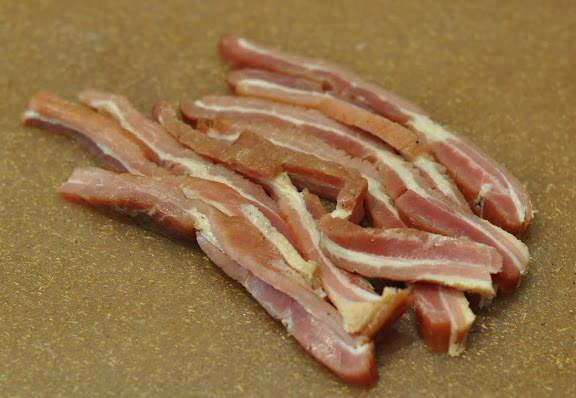 The bacon slices will go on top of the beans just before they go in the oven.  We had some leftover homemade bacon in the freezer from one of our early batches that was a little too salty for ordinary breakfast consumption.  But it was perfect for adding flavor to baked beans. 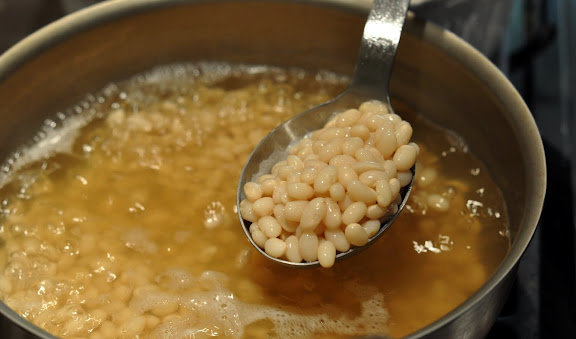 After the beans have simmered for an hour, use a slotted spoon to remove them from the water and add them to the oven-safe container with the sauce.  Don’t discard the water that the beans simmered in because you’ll need to add some back to the beans to keep them moist while they cook in the oven. 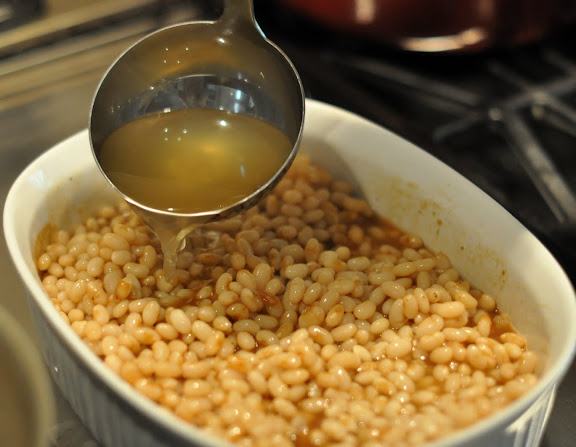 Add a couple ladles of the simmer water to the bean mixture so that the beans are covered with a thin layer of liquid. 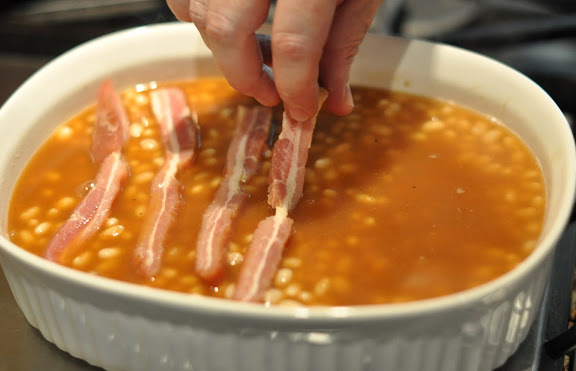 Place the bacon strips on top of the beans. 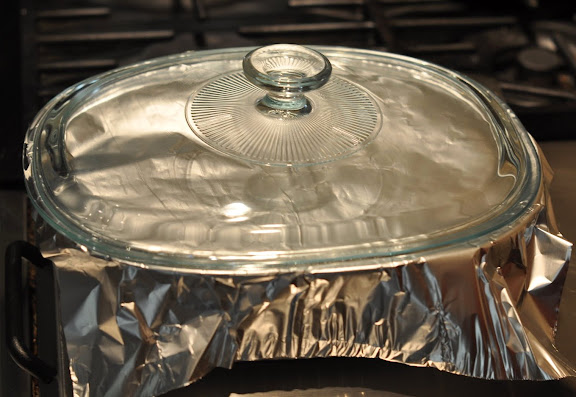 Cover the dish with a layer of foil, place the lid on top of the foil, and put the dish in the oven preheated to 300 degrees.  Bake the beans for about 5 hours, checking regularly to make sure the beans don’t dry out.  Add simmer water to the dish as needed to keep the beans moist. 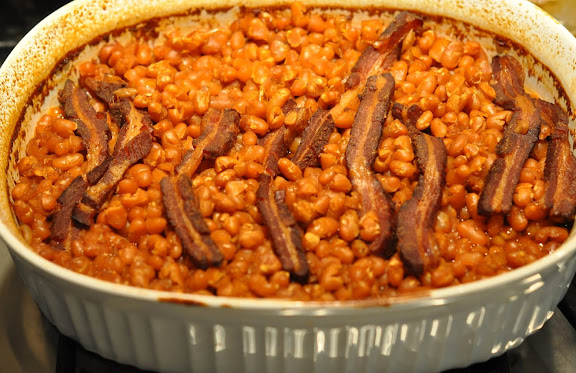 Uncover the beans for the last half hour of baking, in order to nicely brown the top layer.  (FYI, we discarded the bacon rather than serve it in the beans since it was so salty.  But feel free to chop up the bacon and add it to your baked beans if you like.) 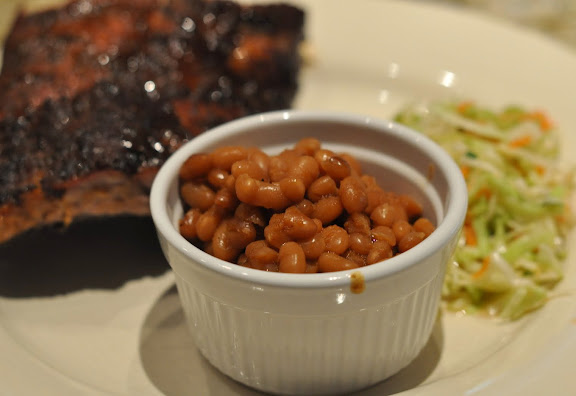 We served our baked beans with BBQ ribs and hot-and-sour coleslaw.  The beans were really good — tender but not mushy, with just the right amount of sweet-yet-savory flavor.

(I really should reprimand my food stylist for leaving that little bit of sauce on the edge of the bowl.  For shame.)