Posted by Dan February 15, 2011 under Charcuterie, Recipes, Side Dishes

We made homemade bacon!  Seriously — homemade bacon.  As we noted in last month’s duck prosciutto post, we are participating in Charcutepalooza, which is a year-long effort by a collection of approximately 200 food bloggers to attempt and document a monthly charcuterie challenge.  This month’s endeavor was salt cure — bacon for the “Apprentice Challenge” and pancetta or quanciale for the (more advanced) “Charcutiere Challenge.”  The greatest part of this whole experiment?  It was foolishly simple, and the end result is so delicious that we are wondering why we have never done this before.  We may never buy the plastic wrapped stuff at the grocery store again.  Many thanks to the folks who put together Charcutepalooza — such a great way to inspire us and others to step out of our cooking comfort zones.  And now, on with the bacon! 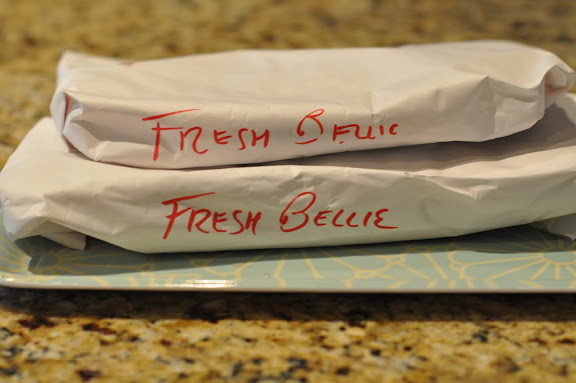 Homemade bacon starts with pork belly.  We bought our pork belly from Rudolph’s Market, an old-school, fantastic butcher here in Dallas.  In addition to beautiful meats, Rudolph’s has an amazing collection of house-made sausages.  When the Charcutepalooza challenges turn to sausages, we may turn to Rudolph’s for some advice, even if they do spell pork belly with an “ie.”  It’s kind of cute actually. 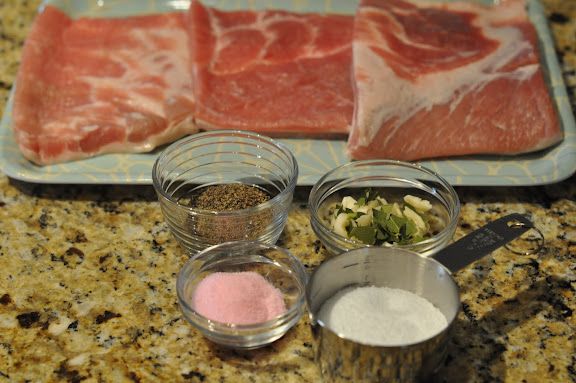 We started with six pounds of “pork bellie” —  the pieces pictured above and one very large piece not shown in this photo.   To cure our bacon we used pink curing salt, ground black pepper, a mixture of crushed garlic and bay leaves, and Kosher salt.   The pink salt can be a bit difficult to find.  We followed Michael Ruhlman’s recommendation and bought ours online at Butcher & Packer. 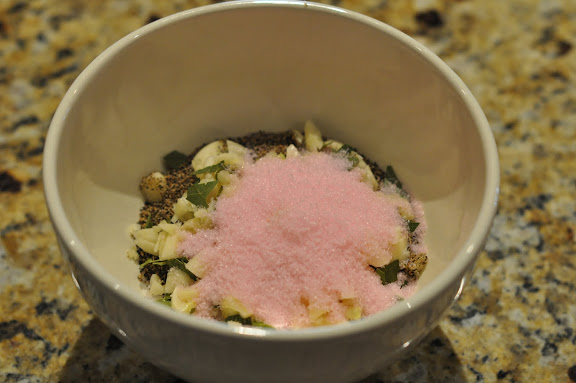 Mix all the curing ingredients together. 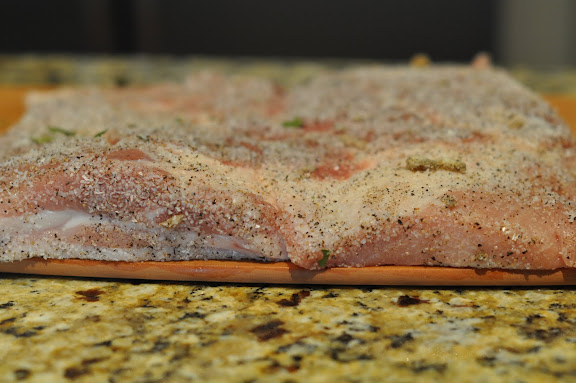 Then liberally coat the pork belly with the salt cure mixture. 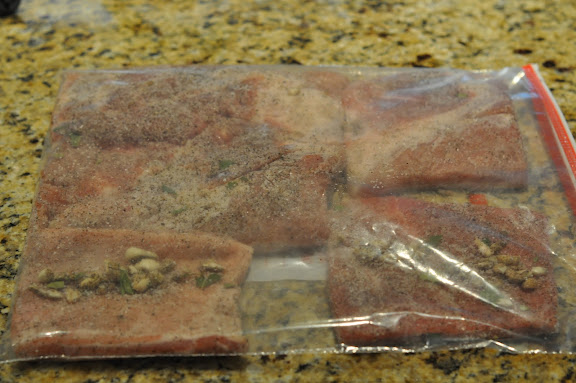 Once the pork is nicely coated in pink salt and garlic goodness, place it in a 2 gallon sealable plastic bag.  Here we have six pounds of pork ready to cure in the refrigerator for a week.  Every day or so, I would turn the bag over or redistribute the curing pork in the bag to keep it as evenly covered with the salt cure as possible.  Probably overkill, but I have to say I was pretty excited about making bacon and didn’t mind checking it out each day during the curing process. 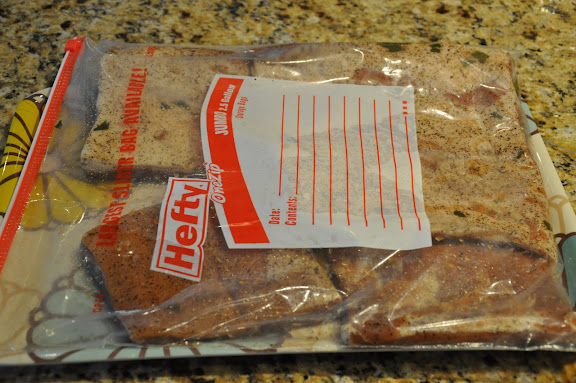 After a week in the fridge, the pork had released a small amount of liquid, which is the result of the salt pulling moisture from the meat.   (Note, we received no promotional consideration from Hefty for this post.  But these 2 gallon bags are really handy to have around.  You may not need such a large resealable bag often, but when you do, these are great.) 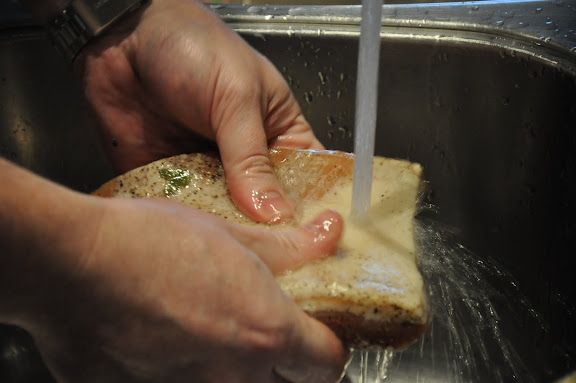 The pork should be well rinsed at this point to remove any remaining salt cure from the outside.  After a good rinse under cold water, we dried the near-bacon with paper towels.  Most recipes at this stage call for the bacon to be either hot smoked for a few hours or cooked over low heat in an oven.  We decided on a mixture of the two methods — starting first with an hour or so of smoking, then finishing in the oven. 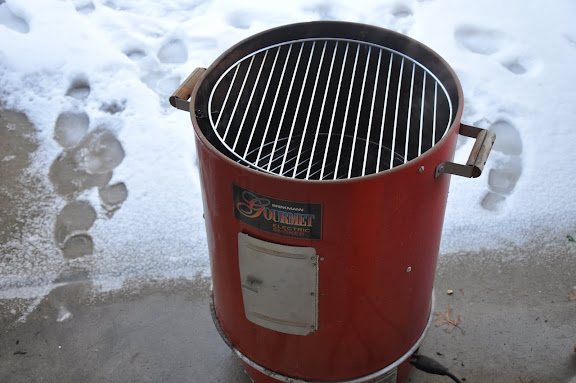 It was a rare snow day in Dallas, which meant that firing up the smoker was even more fun. 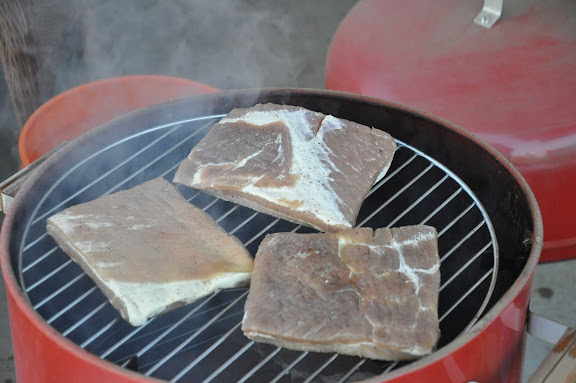 The bacon smoked over hickory chips for approximately an hour (with the lid on, obviously.) 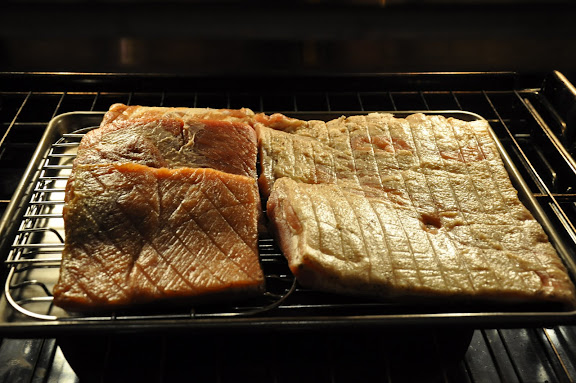 After smoking, we placed the bacon over wire racks on a cookie sheet in the oven at 200 degrees.  We cooked the bacon until it reached an internal temperature of 150 degrees, about 2 hours. 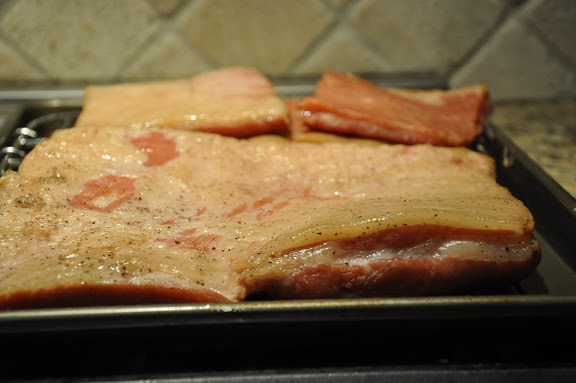 Our first look at homemade bacon. This was the day before the Super Bowl, so naturally I was supporting the team.  The bacon turned out to be a much better success than the game, sadly. 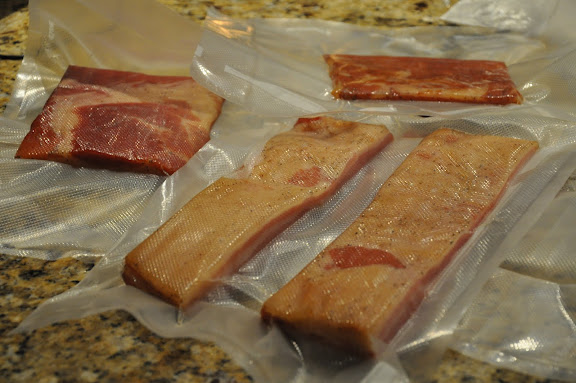 We portioned the bacon into usable sizes and vacuum sealed the portions to use/freeze. 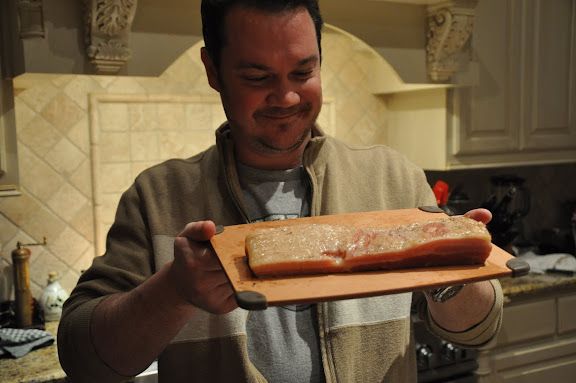 A very happy FoodieLawyer, appreciating the majesty and wonder that is homemade bacon.  You may be wondering, what are you going to do with this bacon?  Well, friends, what AREN’T we going to do with it!  We are huuuuuuuge bacon fans, and we use it in a number of our recipes.  (Any advice that bacon is too unhealthy to eat should be ignored.  In moderation, it’s fine, and considering how delicious it is, a little bacon in your life is well worth it.) 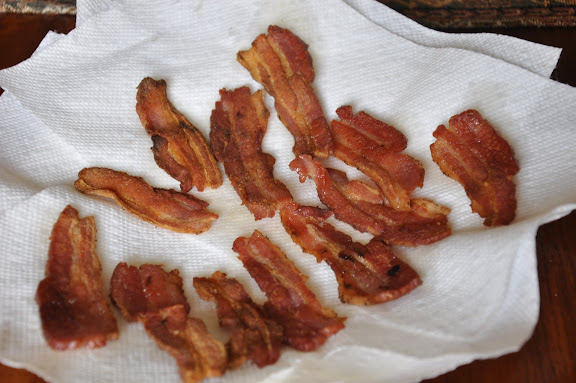 Our first use of our bacon was to fry some up for “Coaches Breakfast,” which we discovered at one of our favorite hotels in Houston.  It consists of an English muffin or toast with cream cheese, bacon and tomato — essentially a breakfast version of a BLT (without the L.)  It’s a fantastic pairing of flavors and textures. 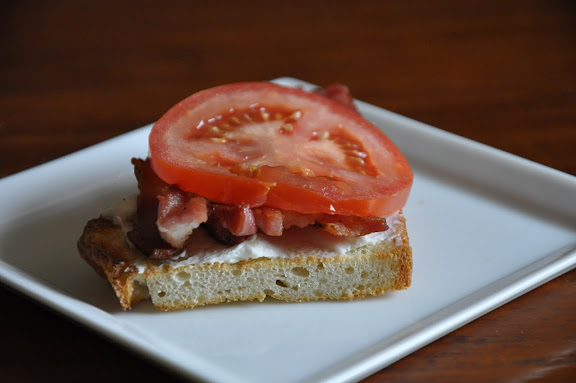 I had made a sourdough boulette the day before, so we used that to make the best toast ever.  And the bacon?  What can I say — a subtle amount of smokiness over a rich, unmistakably bacon flavor.  Absolutely delicious. 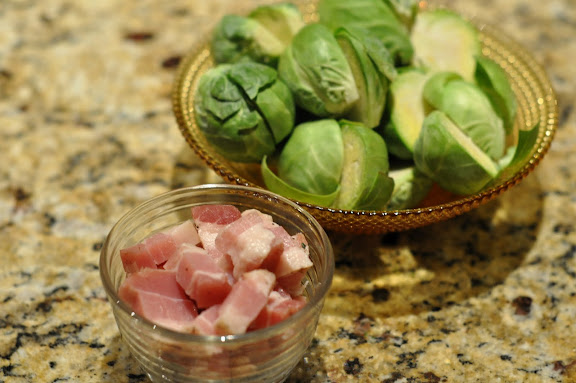 Our next use of our homemade bacon was with brussels sprouts.  We previously posted a brussels sprouts recipe using pancetta.  Good, but this bacon took the dish to a whole new level. 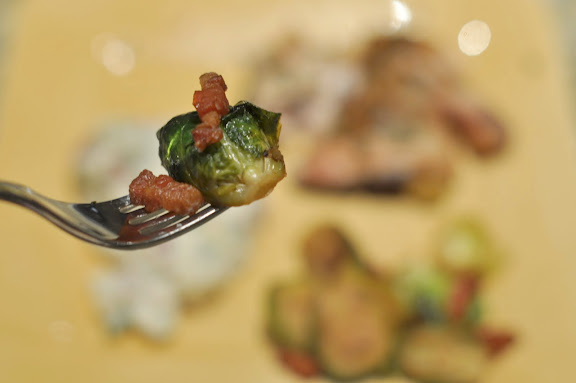 Using “lardons” of bacon (essentially thick pieces) added so much more flavor to the brussels sprouts — amazing.  We will try to always have lardons on hand to use in this recipe. 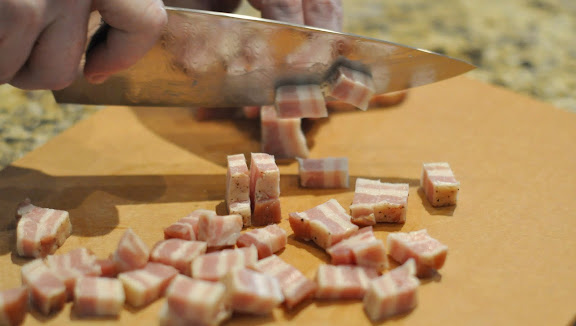 Our final (for this post anyway) use of the new bacon was in a tomato vodka sauce.  This is another recipe in which we previously used pancetta, but from now on will use homemade bacon if we have it on hand.  (After we tried this, Kelly’s only suggestion was to cut the bacon into smaller pieces.) 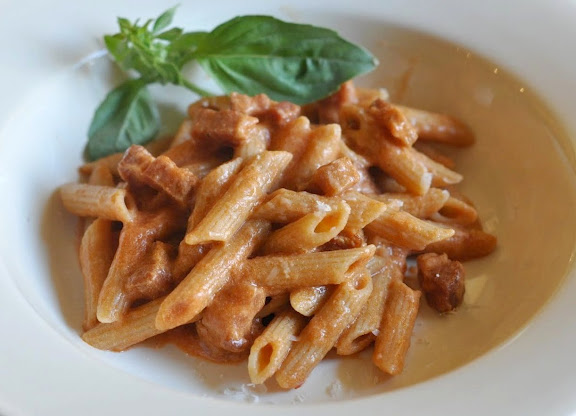 Homemade bacon in vodka sauce resulted in one of our new favorite pasta dishes.  The bacon added a greater depth of flavor than pancetta — absolutely delicious!

Overall, we are extremely happy with how the bacon turned out, and we will definitely make it again.  We plan to try to always have some in the fridge and/or freezer, ready to use in many different recipes, or just eat with some eggs for breakfast.  Once you find a good source for the pork belly (or “bellie) and the pink salt, the rest could not be easier!