Being foodies, we love finding great restaurants.  And Dan being born 4 days before Valentine’s Day means that we get a chance to try fancy/romantic/new restaurants on his birthday without any hassle about getting a reservation or fighting the Valentine’s crowds.  This year, we decided to try Bijoux, “a contemporary French” restaurant.  Bijoux offers a five course prix fixe menu, or you can just order however many courses you’d like – a la carte style.  They also have a chef’s tasting menu, but we passed on it this time, since we just had the tasting experience last month at Fuego.  Bijoux is a wonderful restaurant — perfect for celebrating a birthday, Valentine’s Day or any other special occasion.  The ambiance was romantic and luxurious, the service was excellent, and the food was outstanding.

Our server explained that most people dining at Bijoux who choose the prix fixe usually pick 2 appetizer courses, 1 entree, 1 cheese course and 1 dessert.  We found that the serving sizes worked really well for this combination, since the appetizers are small and the entrees are larger (although still not as large as a regular-sized portion at most restaurants).  In addition, there is a wide variety of appetizer choices on the menu — so many that I probably could have picked 3 and skipped the cheese course. 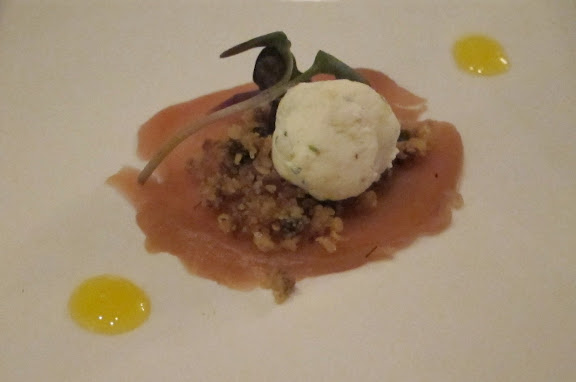 Before we even got to the first appetizers, the chef sent out his complimentary “amuse-bouche.”  It was a beef carpaccio with nuts and cheese.  An excellent start to the meal. 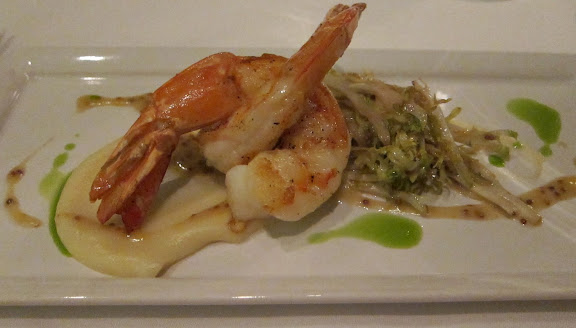 My first appetizer was pan seared prawns with golden tomatoes, bacon froth and whole grain mustard.  I loved it!  The prawns were cooked perfectly and the tomatoes had a really fresh, summery flavor that went well with the prawns.  I think there was some celery in there too.

Dan’s first appetizer was the trio of oysters, topped with “roasted tomato, bloody mary granite, and ‘cocktail sauce.'”  Each topping had its own distinct taste that also brought out the flavor of the oysters.  Dan says that the one that had lots of citrus was his favorite, but all of them were good. 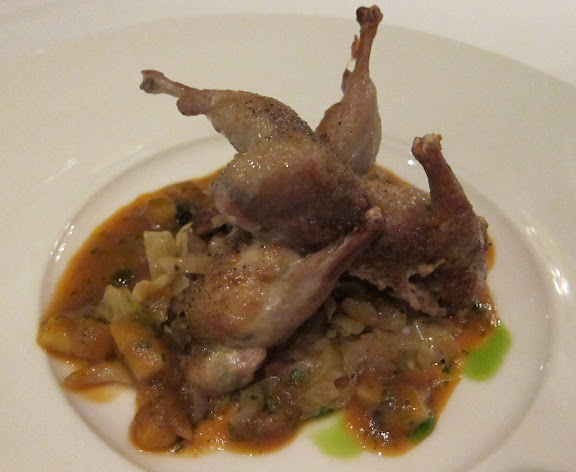 My second appetizer was quail.  I don’t have the fancy description for it because Bijoux’s menu is seasonal and much of it is locally-sourced, so it changes often.  The quail appetizer is not on the current version of the online menu, and we didn’t save a menu from the night we were there.  Oops.  I’m not really sure what the other ingredients on the plate were, but I think they made up some sort of ragu.  It was a little sweet for my taste.  The quail was good but could have used a teeny bit of salt (Dan is rolling his eyes now — he thinks I over-salt everything, which I probably do.  If a “salt tooth” is a thing, I have it.) 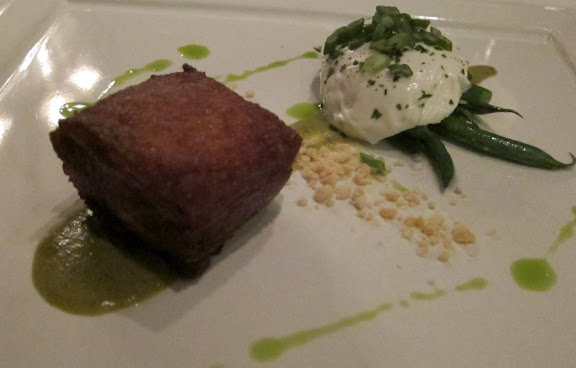 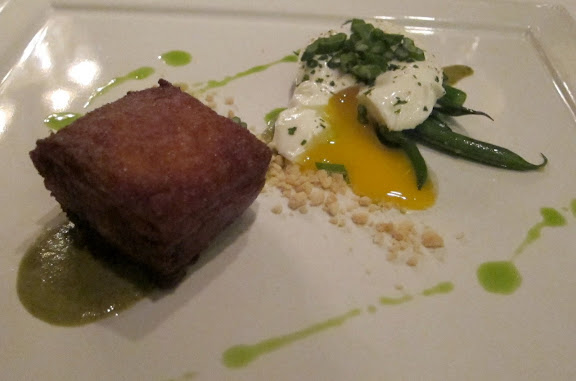 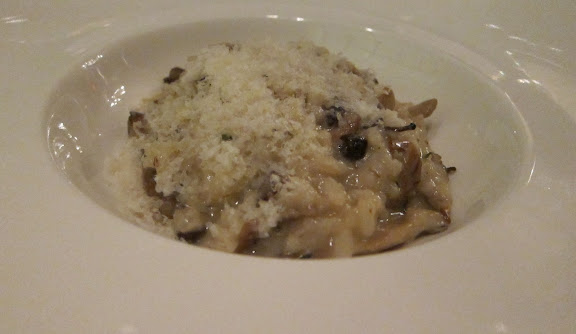 My entree was by far the best dish of the night — mushroom risotto.  It was everything that good risotto is supposed to be — rich (but not too rich), creamy but with just the right amount of “bite,” and perfectly balanced cheese and mushroom flavors.  I will crave this risotto.  (And Dan will soon begin his quest to re-create it.  Wish him luck.) 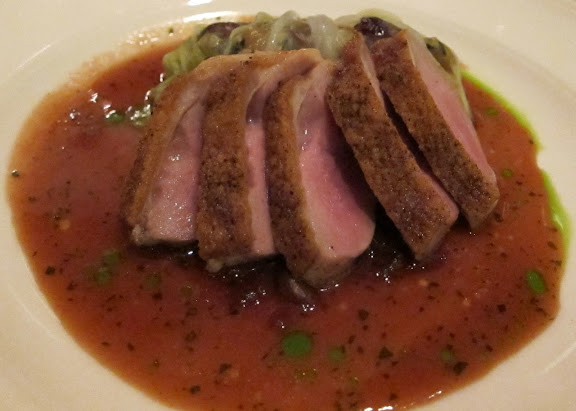 Dan chose the duck breast for his entree.  Again, the menu has changed since the night we were there, so I don’t have the fancy description.  Dan enjoyed the duck and says it was moist and flavorful.  Accompanying the duck was the chef’s take on stuffed cabbage with cranberries, nuts and more duck.  The cabbage was surprisingly (for those who don’t prefer stuffed cabbage) excellent.  It tasted like Thanksgiving.

We both chose different types of goat cheese for our cheese courses, neither of which is on the current menu.  Both were “challenging” cheeses (to borrow a phrase from Dan’s brother and cheese-lover Sean.)  Very strong flavors.  Mine was accompanied with wine-soaked pears (I think), nuts and some sort of bread.  The cheese was a little much for me, but I did like how all the flavors came together. 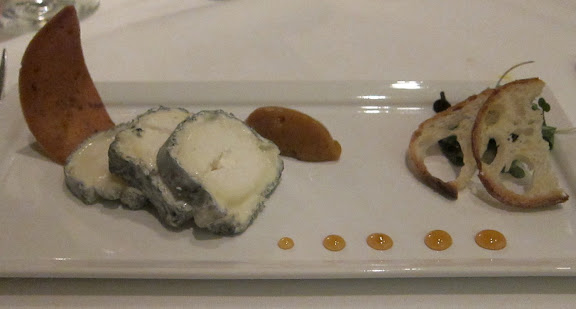 Dan’s cheese course was even more challenging — as in, the challenge was to actually eat it.  The cheese tasted a little bit like really strong brie, which may be why we didn’t enjoy it that much (it’s a taste neither of us seems to have acquired.) 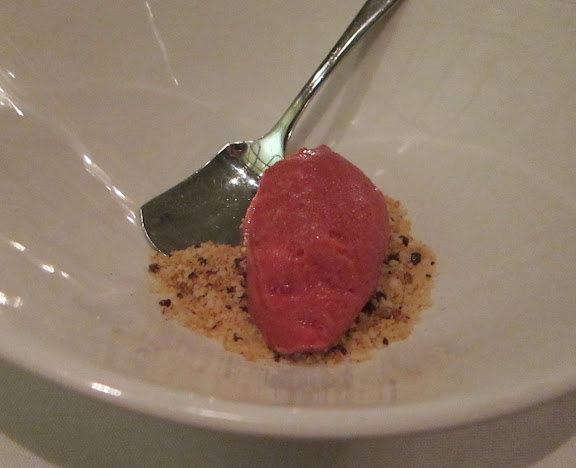 Before dessert, we were treated to a palate-cleansing bite of sorbet:  raspberry…. 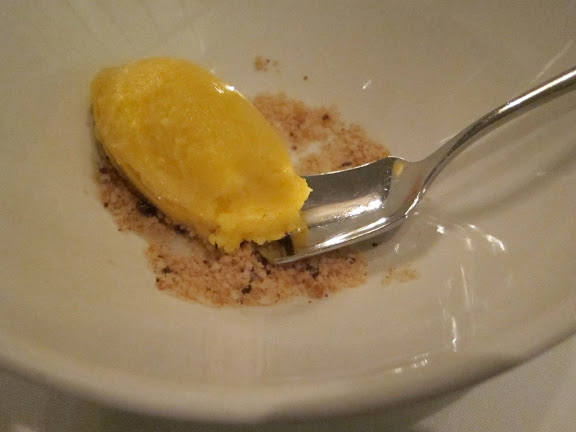 ….and mango.  Both were delicious with delicate fruit flavor.  Our server explained that the flaky bed on which the sorbet was served was “the pastry chef’s little mistakes” of dessert bits saved and crumbled into a garnish.  How cute is that?  Yummy too, with tiny pieces of chocolate, pastry and other sweet things. 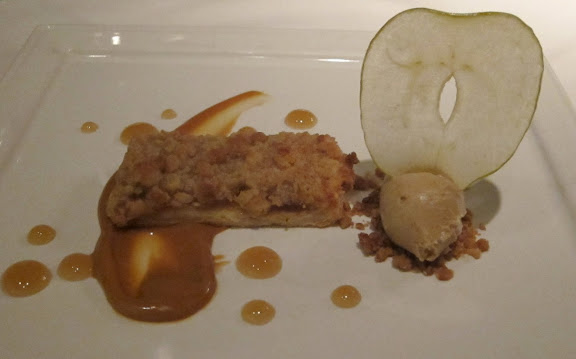 Given how much food we had eaten by this point, we decided to split dessert.  The “apple buckle” is not on the current menu, but I don’t need the fancy description to describe how amazing it was.  The cake part was flaky and crumbly with just the right amount of apple.  The caramel garnish was a nice touch — who doesn’t love caramel and apple together?   And the crispy apple chip was tucked into a small scoop of delicious cinnamon vanilla ice cream.  Imagine all the best flavors of apple pie deconstructed into one of the best desserts we’ve had in a very long time. 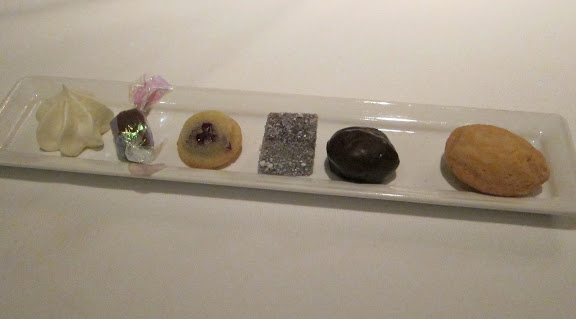 The final fancy touch to Dan’s birthday dinner was a complimentary tray of chocolates and other sweet treats.  We had a lovely evening and highly recommend Bijoux the next time you have something to celebrate or are in the mood for a multi-course, elegant dinner.  Don’t be deterred by the fact that many of the dishes we tried may not be on the current menu when you go — we’re sure there will be many other options that are just as good, if not better.  (Although we’ll be stalking the menu for the mushroom risotto and apple buckle the next time we plan to go.)