Posted by Mrs. FoodieLawyer May 15, 2011 under Charcuterie Charcutepalooza

Another month has gone by and that means a new Charcutepalooza post.  This month’s challenge is grinding — more specifically, Breakfast Sausage patties, Merguez or Mexican Chorizo.  We decided to make Chorizo because we have an excellent black bean soup recipe that calls for Chorizo.  As a bonus, we also decided to grind our own meat for a bolognese sauce.  Of the Charcutepalooza challenges so far, this one was relatively easy (the KitchenAid attachment does most of the work), but also one of the furthest from our comfort zones.  Handling raw meat is not something to be taken lightly.  As always, we thank Charcutepalooza organizers Mrs. Wheelbarrow and The Yummy Mummy for inspiring us to embark on new and interesting endeavors in the kitchen.

I’ll just go ahead say what some of you (and you know who you are) are probably thinking — a post about meat grinding obviously has great potential for jokes and innuendo of the “that’s what she said” variety.  But I’m going to keep it clean, so feel free to insert your own (See? It already started.) 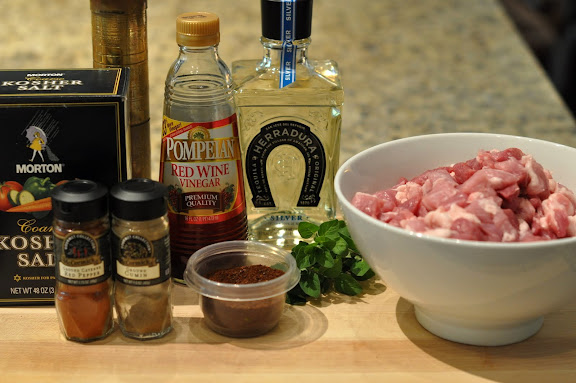 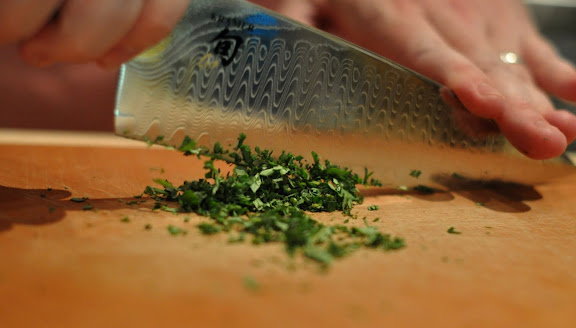 We happened to have some fresh oregano in our garden and chopped it up. 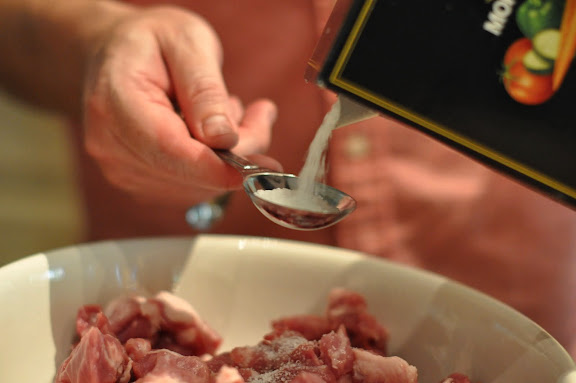 Chorizo starts by adding the spices to the cubed pork, stirring it all together well, and then allowing it to sit in the refrigerator so that the flavors blend together.  Here, Dan begins the process with Kosher salt… 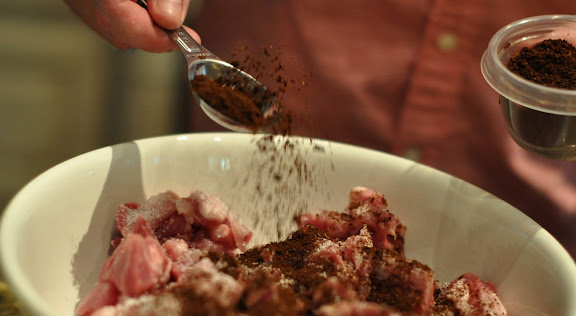 …then ancho chile powder.  We used homemade powder that was leftover from making Chili. 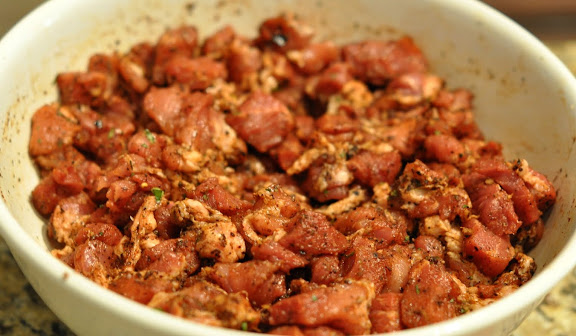 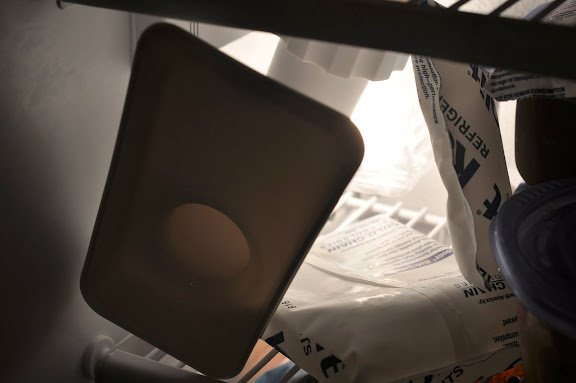 The KitchenAid grinding attachment chilled in the freezer while we prepared the ingredients.  From what we’ve read in Charcuterie, as well as several online tutorials on home grinding, one of the most important keys to success is to keep everything nice and cold. 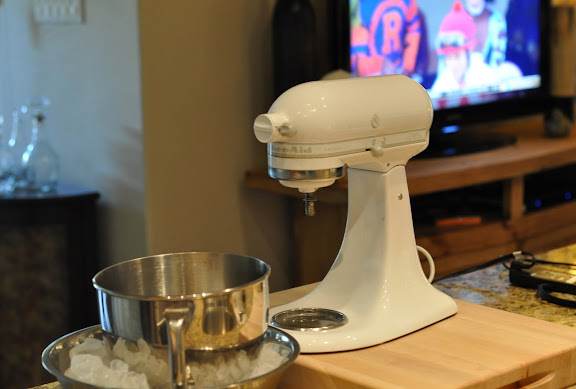 As an extra precaution, we placed the bowl into which the ground meat would fall in another bowl filled with ice — just to make sure the meat stayed cold throughout the entire process.  We weren’t grinding a lot of meat, so this step may have been overkill, but we figured it certainly couldn’t hurt.  Hey look, on the TV in the background — the Kentucky Derby is about to start! 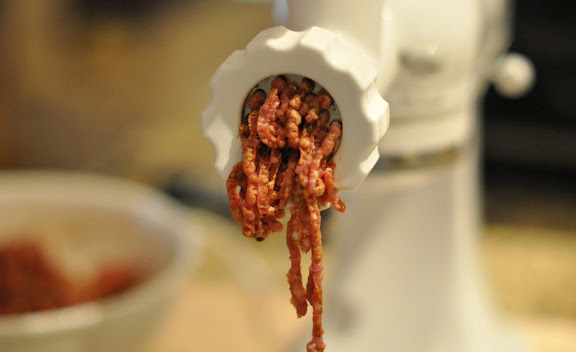 It really is easy to grind meat at home, given the proper equipment and the precaution of keeping everything cold. 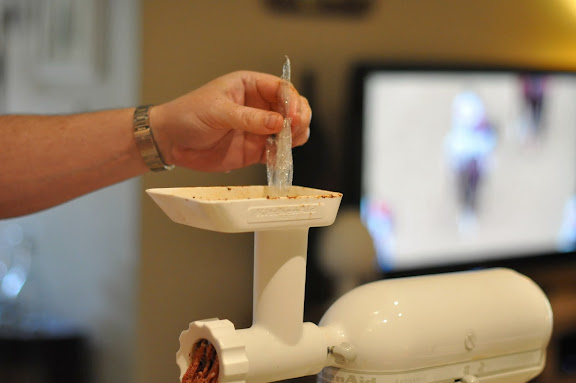 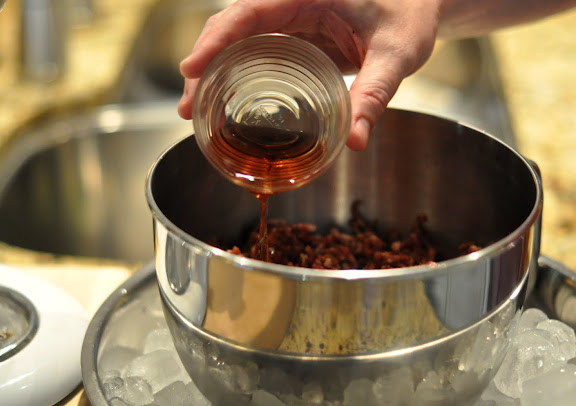 Dan added the chilled tequila and red wine vinegar to the ground meat. 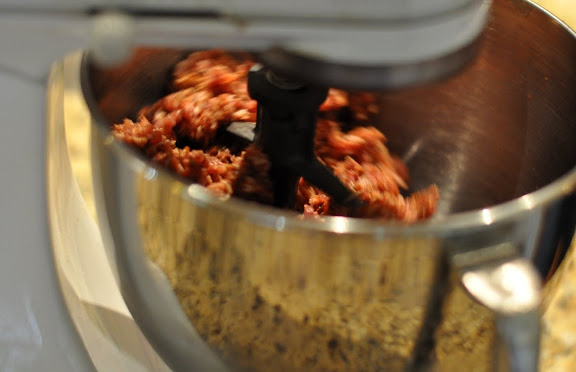 Then he used the paddle attachment on the KitchenAid to mix everything together. 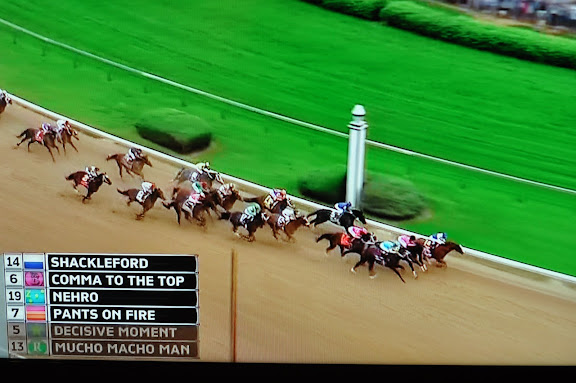 Dan timed this part of the process perfectly such that we could watch “The Greatest Two Minutes in Sports” while the KitchenAid did its job — coincidentally taking about two minutes to mix the meat and liquid until it developed a uniform and sticky appearance. 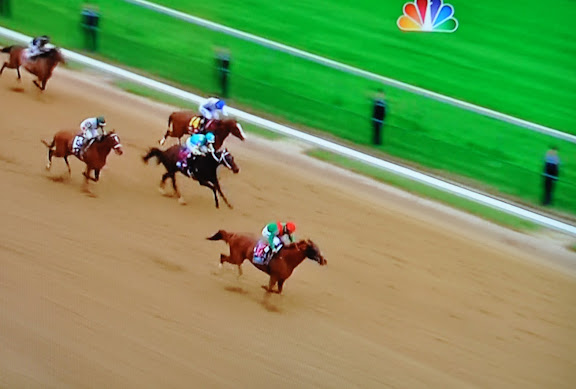 It was an exciting race this year, with 20-1 Animal Kingdom surging from way back in the pack during the final turn to take the lead… 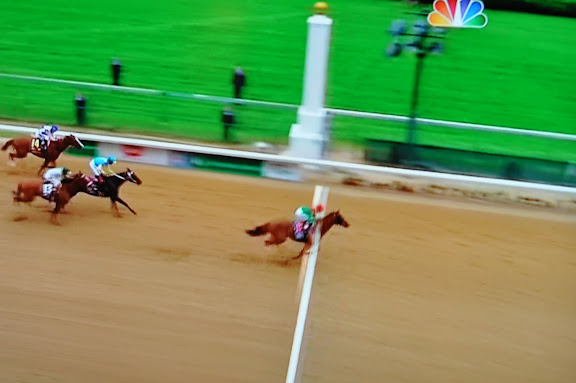 …and claim clear victory by more than a length!  Watching the Kentucky Derby made us realize that we’re long overdue for a trip to Lone Star Park to play the ponies. 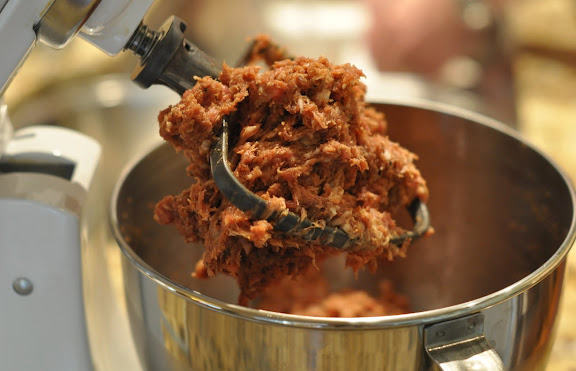 Back to the meat — looks uniform and sticky to me. 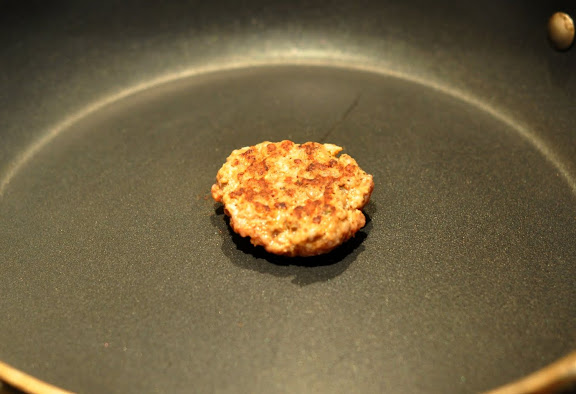 We decided to taste the chorizo in breakfast patty form.  It was pretty good, but in my opinion, chorizo is one of those foods that tastes best as a component of a dish, rather than on its own (Dan respectfully disagrees.)  We had chorizo in scrambled eggs for breakfast the next morning, and they were delicious. 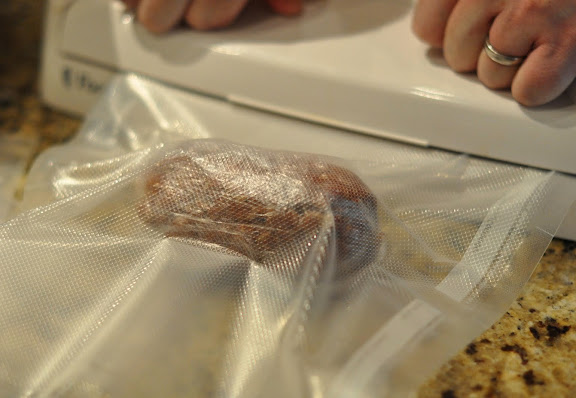 Three pounds of chorizo is a bit much to consume in one, or even several, meals — so Dan set aside some to vacuum-seal and freeze for later use. 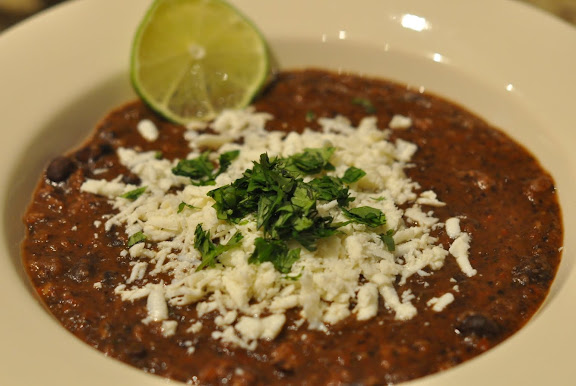 The use of our homemade chorizo that we were most excited about was black bean soup.  This is a great recipe from “The Best 30-Minute Recipe” cookbook.  Chorizo is the base of the soup and adds an extra dimension of flavor to spice up the beans and broth.  We’ll post the recipe soon. 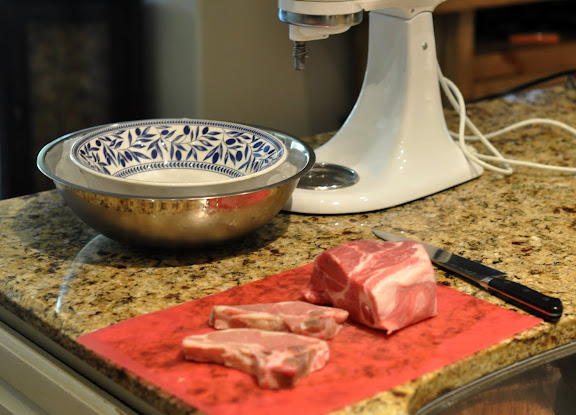 Our self-imposed Part 2 of the grinding challenge was to grind veal and pork for a white bolognese recipe created by one of our favorite fellow food bloggers. 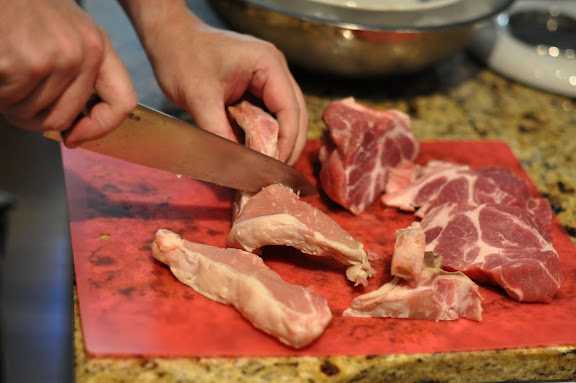 Dan cut up all the meat into long thin strips… 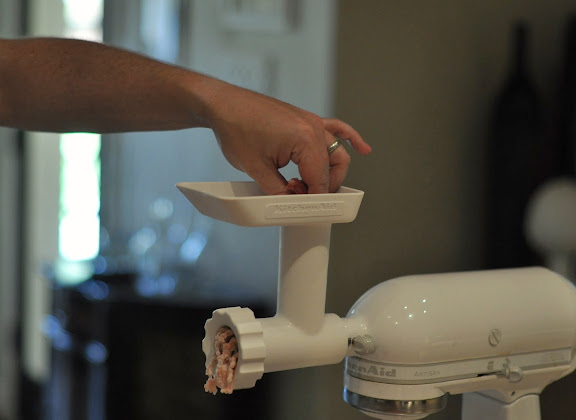 …then fed the strips into the grinder.  (Much less dangerous than it looks to feed the meat in by hand because the sharp piece that cuts the meat is at the very bottom front end of the attachment.) 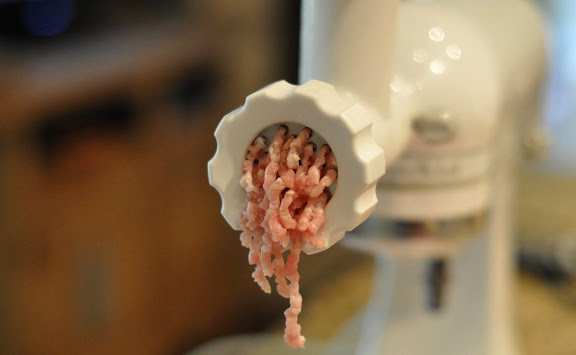 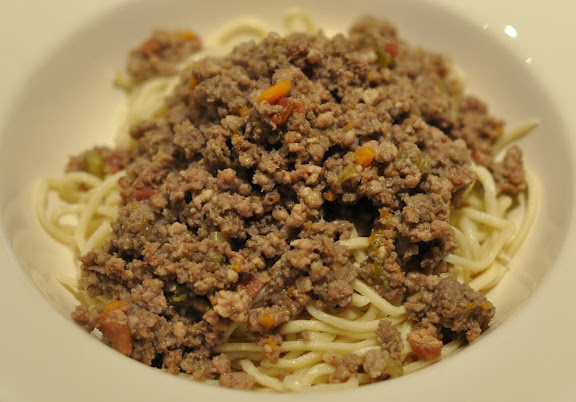 We love this white bolognese recipe — it’s addicting.  The meaty sauce is somehow both rich and light at the same time, with a comfort-food flavor component from the carrots, onion and celery.  Paired with homemade noodles and a glass of good red wine, this is a perfect Sunday dinner.

Home grinding has now been successfully demystified in our household!  Taking the time to prepare the meat properly and following some simple food safety practices (such as frequent hand washings), we now have a whole new set of home kitchen skills.  Yes, you can buy ground beef at any grocery store, but grinding your own is both cheaper and more satisfying.  In addition, you know exactly what you are eating and how it was prepared.  Our next meatballs will be made with home-ground ingredients, and Dan is making plans to grind up brisket for burgers.  We’re inspired.