Posted by Mrs. FoodieLawyer May 10, 2011 under Main Ingredient, Recipes, Side Dishes, Vegetable

I’ve mentioned before that I’m always on the hunt for good side dishes that are different than our usual rice, potatoes or pasta (not that there’s anything wrong with those.) When looking for something to go with a fish dish, I found a couple of recipes using quinoa, a whole grain that we had never previously cooked, eaten or even knew existed.  If you’ve never had it before either, it’s actually pronounced “keen-wa,” not “kin-o-ah,” something I did not discover until I saw the helpful pronunciation on the package and had repeatedly mis-pronounced it.  We combined elements from several recipes and ended up with a pretty interesting side dish (don’t you hate it when people describe food as “interesting”  — what does that mean?  Good?  Terrible?  “Interesting” could describe either one.) 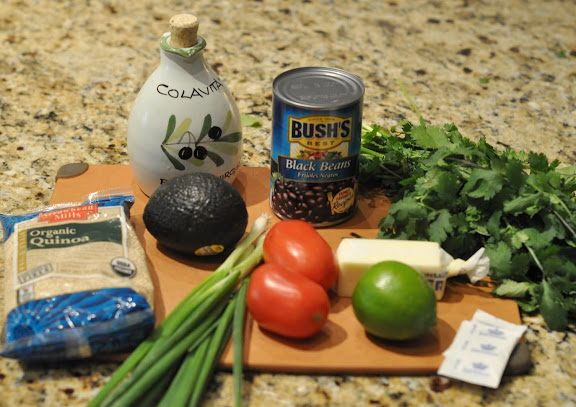 The ingredients for this interesting dish include quinoa (why can’t I pronounce it correctly, even in my head?), avocado, green onions, black beans, tomatoes, lime, cilantro, olive oil, butter and sugar. 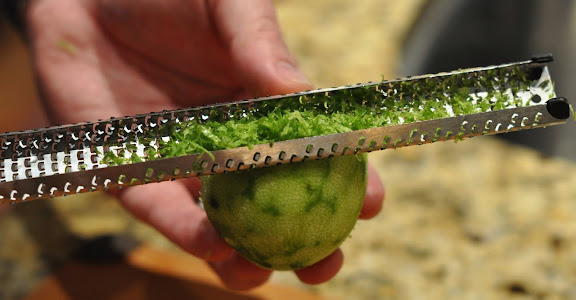 Start by combining the dressing ingredients in a large bowl, to which you will eventually add the quinoa, beans, tomatoes and other ingredients.  First up for the dressing — lime zest. 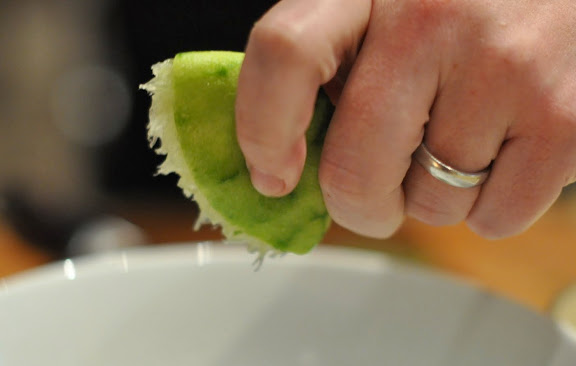 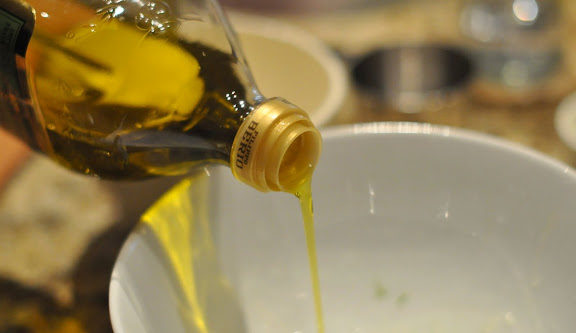 Add olive oil and a tablespoon of butter that has been melted and cooled. 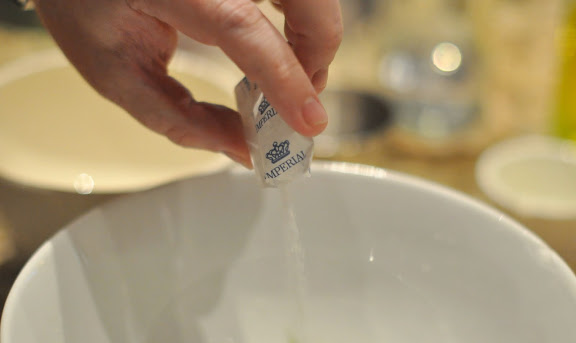 Then add the sugar, salt and pepper. 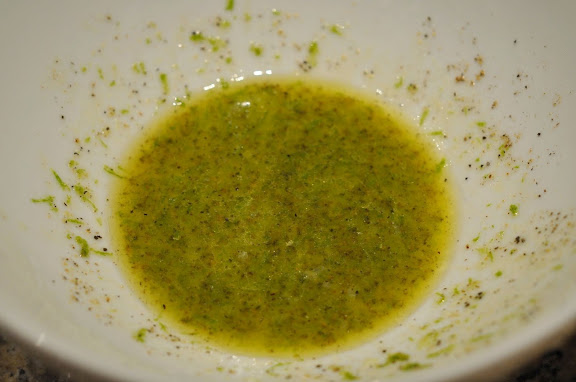 Whisk the ingredients together and set aside. 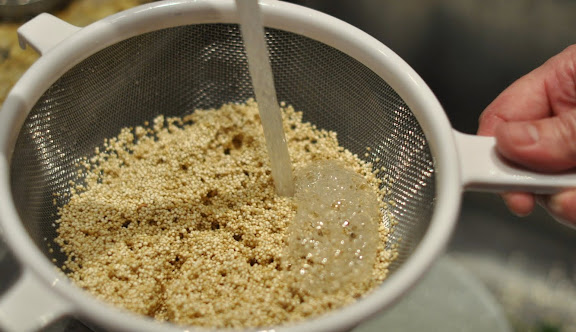 The package instructions recommend rinsing the quinoa in order to “wash away any naturally occurring bitter tasting saponins,” which are “soap-like substances that occur on the outside of the quinoa grains.  It is believed that they are put there by nature to deter insects and birds.”  This might be the most informative packaging for a side dish I have ever encountered.  Despite providing this interesting information about the grains, however, the package instructions were less useful for determining exactly how to rinse these tiny tiny particles without just washing them down the drain.  We finally decided to give it a shot with our strainer that had the smallest holes (a little bigger than the size of the quinoa themselves.)  We lost a few grains in the process, but not too many. 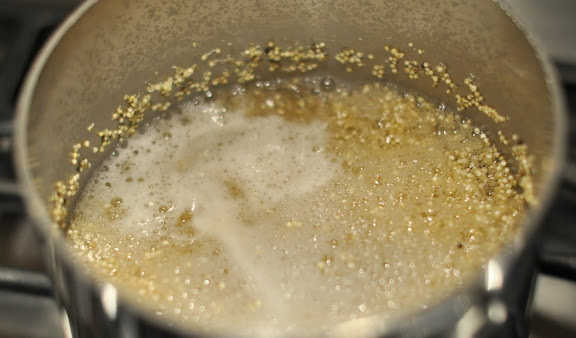 Place the quinoa and water in a saucepan and bring to a boil. 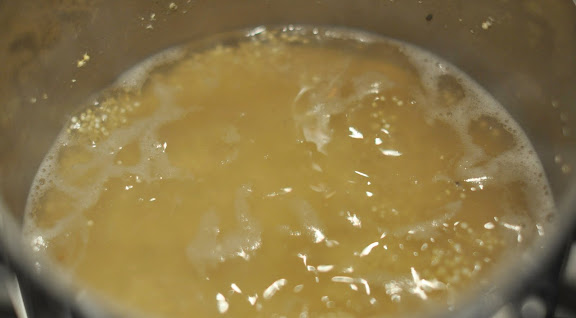 Reduce the heat and simmer until the water is absorbed — 10 to 15 minutes.  Other recipes call for a more elaborate cooking method involving a sieve and steaming the quinoa, but we decided to follow the more simple cooking instructions on the quinoa package. 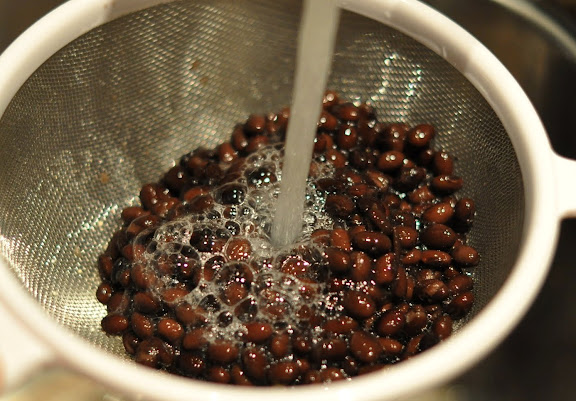 While the quinoa cooks, prepare the remaining ingredients (other than the avocado, which you don’t want to cut up until right before you add it to the dish.)  Rinse the black beans. 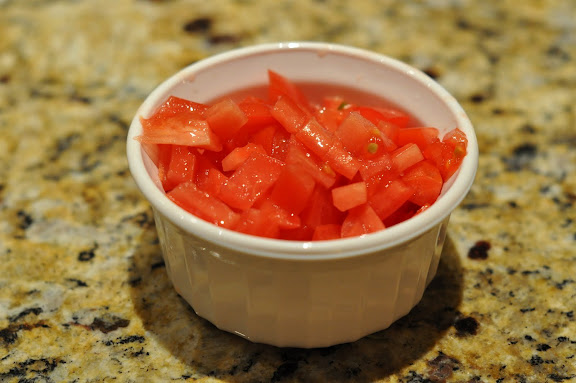 Chop up the tomato. 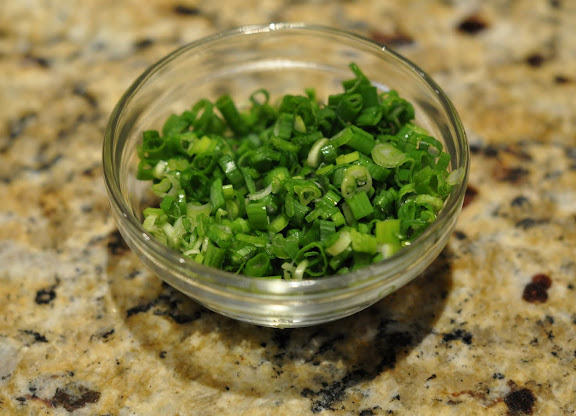 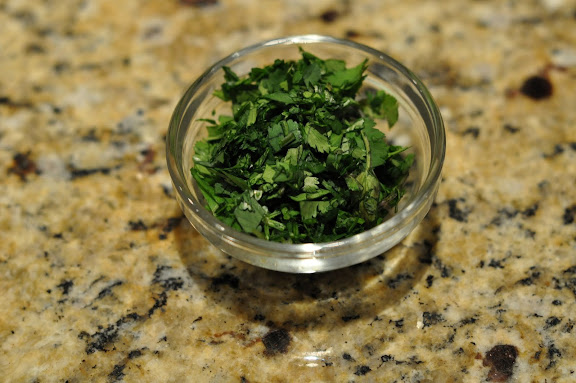 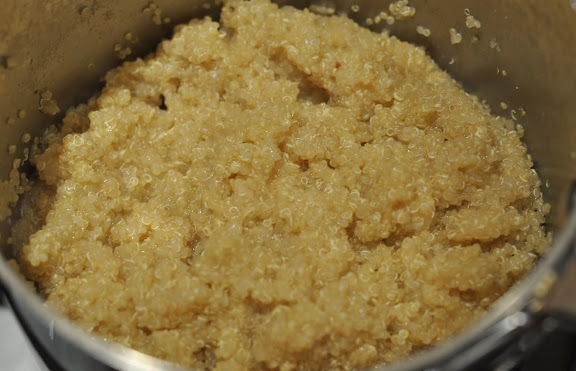 We weren’t really sure how to tell if the quinoa was (were?) done or not, so I consulted the package, which instructed that “when done, grains will be translucent and the outer germ layer will separate.”  Hmmm.  We thought the grains looked somewhat translucent-ish.  And we ultimately concluded that those little white “C” and circle shapes surrounding the grains were the separated germ layers.  Nailed it! 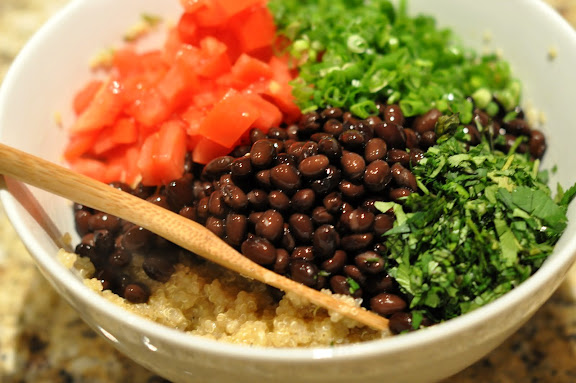 Add the quinoa, black beans, tomato, green onion and cilantro to the bowl with the dressing and toss until all the dressing is absorbed.  Then top each serving with avocado cut into small pieces. 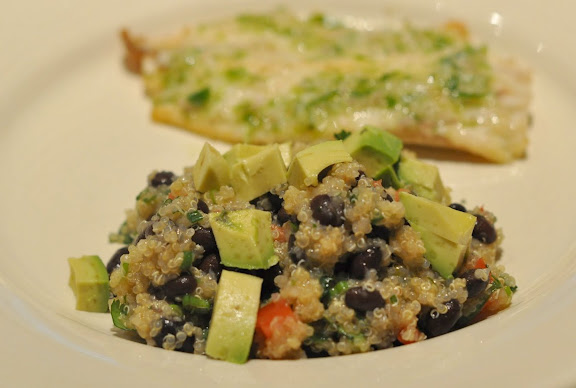 So, did we like it?  Mostly, yes.  The flavor is good, especially when mixed with other flavorful ingredients like tomatoes, black beans and avocado.  My only issue is the texture, which is…unusual.  I suppose the best way to describe it would be “toothsome.”  But, I think we’ll try it again sometime — it’s really healthy and definitely something a little different.  And interesting.

Directions:
Using a bowl large enough to accommodate the quinoa, beans, tomato and avocado — whisk together the lime zest and juice, butter, olive oil, sugar and salt and pepper.

Rinse the quinoa in a mesh strainer with the smallest holes possible.  Place the quinoa and water in a saucepan and bring to a boil.  Reduce the heat and simmer until the water is absorbed — about 10 to 15 minutes.  The quinoa is done when the grains appear translucent and you can see a tiny ”C” or round white spot surrounding each grain.

Add the quinoa, black beans, tomato, scallions and cilantro to the bowl with the dressing and toss until the dressing is absorbed.  Salt and pepper to taste, then top each serving with the diced avocado.