We’ve mentioned before that one of our favorite places we’ve ever visited is New Orleans.  When we were there last May, we wandered around looking for a good place to have our final meal of the trip, hoping to make up for a surprisingly mediocre plate of etouffee from lunch the previous day.  (The etouffee was so bad that a local guy dining next to us said it was the worst he’d ever had and he didn’t want to have to pay for his meal as a result.)  We found a great little place in the French Quarter that more than made up for the not-so-good lunch.  Dan ordered the meal featuring a trio of famous Cajun dishes — red beans and rice, etouffee and gumbo — and finally got to sample what authentic etouffee is really supposed to taste like.  The other two dishes were authentically delicious as well.  Ever since that meal, we’ve wanted to try making these dishes at home.  We’ve already tried Seafood Gumbo (with rather successful results, if we do say so ourselves – and we do), so we decided to give red beans and rice a shot.  Success Number Two! 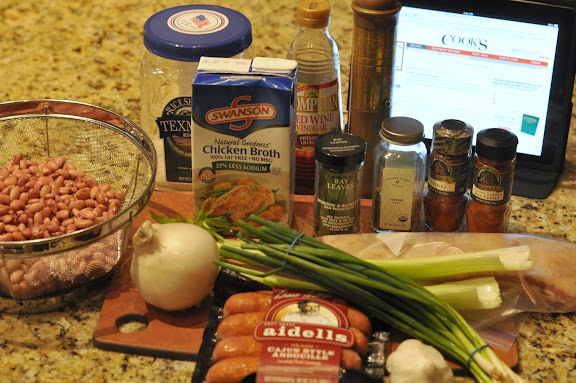 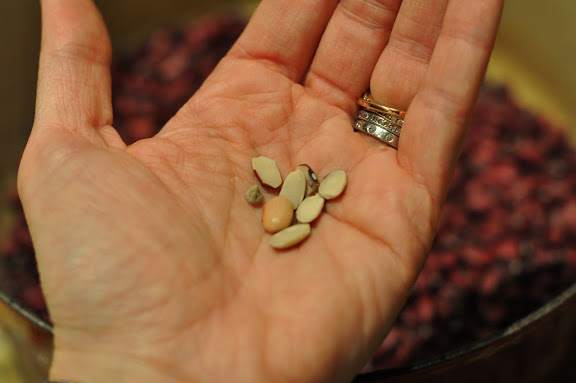 The recipe states that the beans should be “rinsed and picked over.”  I wasn’t really sure what the “picked over” part meant, but I sifted through the beans and found a couple of tiny rocks and a few beans that had seen better days.   So I threw those out and proceeded with the rinsing.

Rinse the beans in a colander. 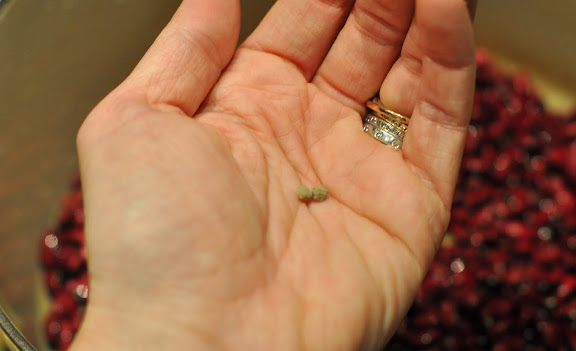 Did a little more “picking over” while rinsing and found a couple more rocks, so this definitely appears to be a necessary step. 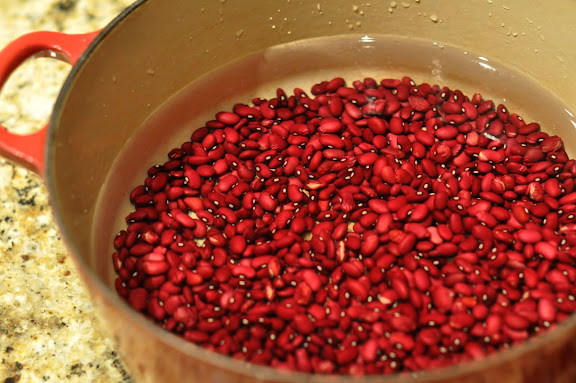 The next step is to dissolve 3 tablespoons of salt in 4 quarts of cold water and soak the beans in the water at room temperature for at least 8 hours and up to 24 hours. 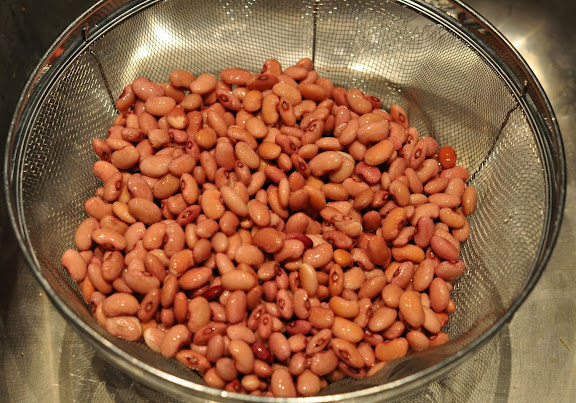 After the beans have soaked, drain and rinse them well.  Surprise – the soaked beans are no longer red.  But “pink beans and rice” doesn’t really have the same ring to it. 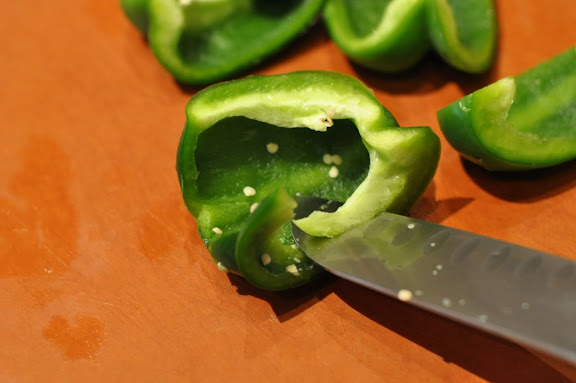 Cut up the veggies.  Be sure to remove the seeds and white rib parts of the bell pepper. 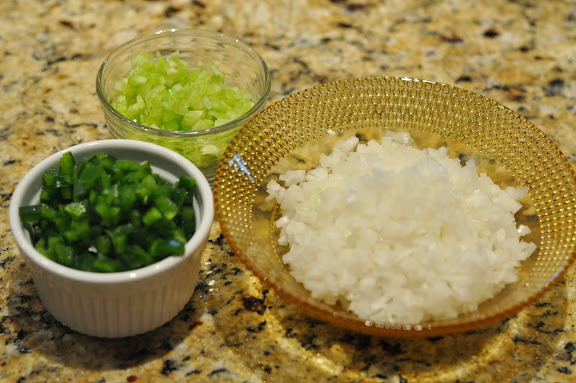 The combination of green bell pepper, onion and celery is often referred to as the “holy trinity” of Cajun cooking. 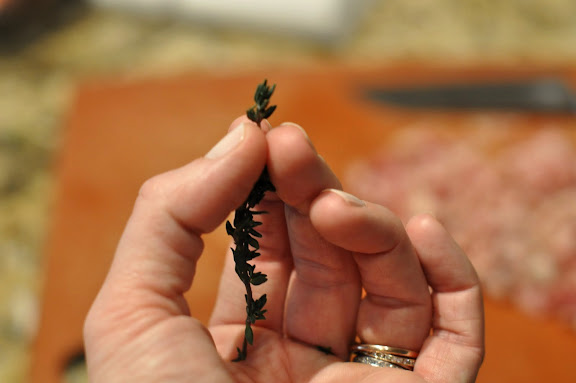 The recipe calls for fresh thyme leaves.  An easy way to remove the leaves from the stem is to hold the stem at the top with one hand, and run your thumb and finger of the other hand down the stem to pull off the leaves.  (I really could have used a third hand here to operate the camera.) 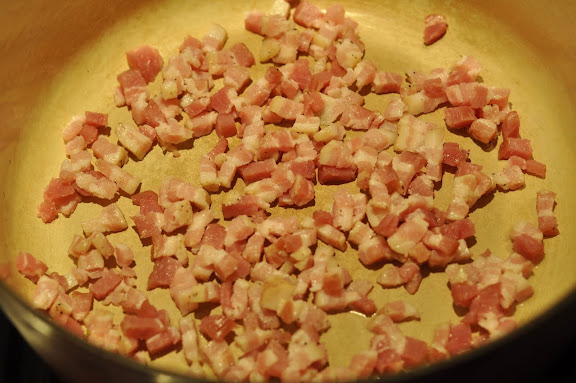 Heat the finely chopped bacon (we used our homemade bacon) in a large Dutch oven over medium heat, stirring occasionally. Cook the bacon until it is browned and almost fully rendered — about 5-10 minutes. 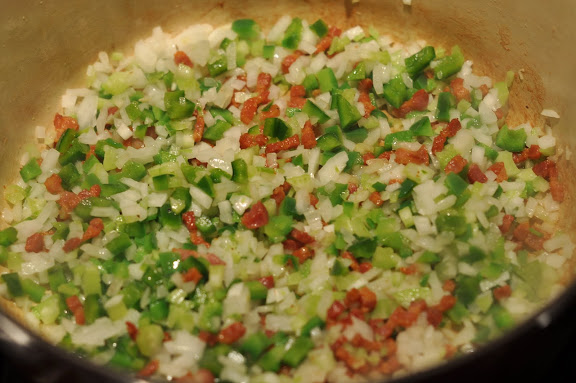 Add the “holy trinity” and cook, stirring often, until the vegetables are softened — about 6-8 minutes. 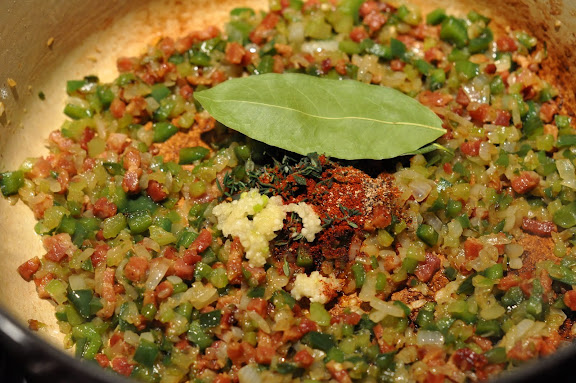 Next, stir in the garlic, thyme, paprika, bay leaves, cayenne pepper and black pepper.  Cook until fragrant — about 30 seconds. 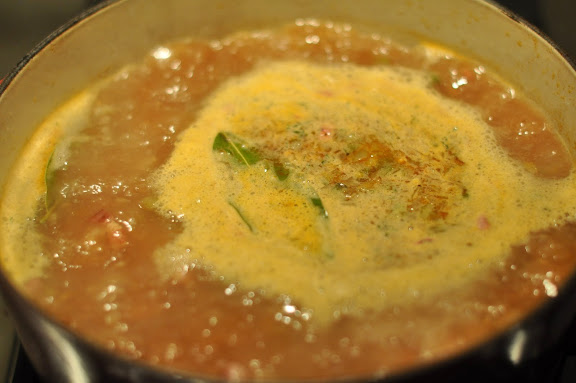 Then add the beans, chicken broth and water and bring everything to a boil.  Once it boils, reduce the heat and simmer, stirring occasionally, until the beans are soft and the liquid begins to thicken — about 45 to 60 minutes. 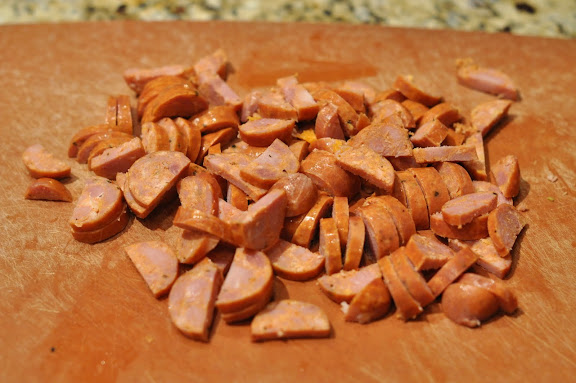 Prepare the sausage by cutting each sausage lengthwise, then into 1/4 inch slices. 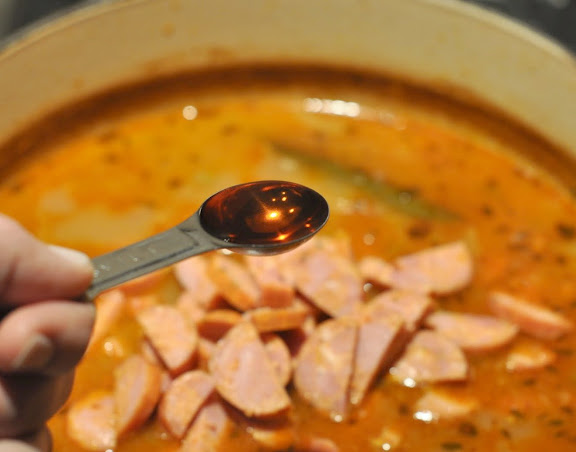 Add the sausage and a teaspoon of red wine vinegar.  The recipe says to “cook until liquid is thick and beans are fully tender and creamy, about 30 minutes.” 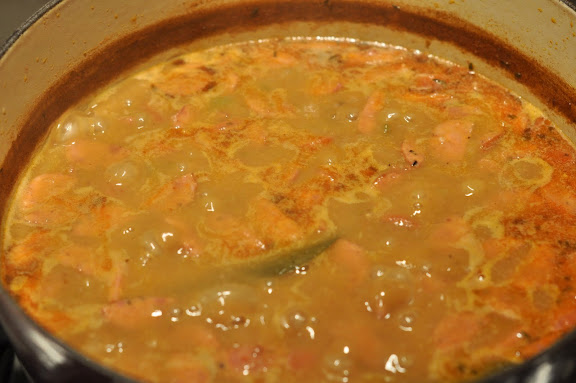 I’ll be honest that I was a little skeptical about the “and creamy” part and what that might look like, since it started out looking very broth-y and not at all creamy. 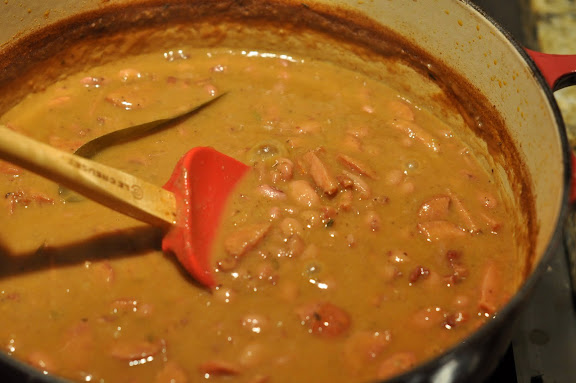 But, sure enough, after about 30 minutes — it turned creamy (for lack of a better word, since that word sounds more and more odd and gross each time I type it.  But it really was creamy.) 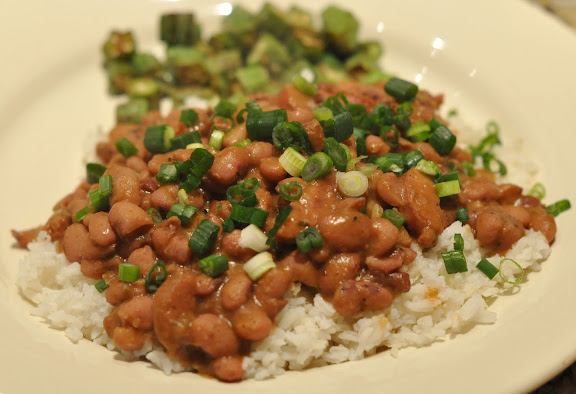 Season to taste with salt, pepper and additional red wine vinegar if necessary.  Serve the beans over white rice and garnish with sliced green onions.   We served ours with sauteed okra on the side.

When researching this recipe, we found that it is also common to season the finished red beans and rice with hot sauce (such as Tobasco, Louisiana Hot Sauce or Cholula Hot Sauce.)  We tried a couple of bites with Cholula, but actually preferred this dish without the hot sauce.  The andouille provided just the right amount of heat, without overpowering the other flavors.  We will definitely make this one again — maybe on a Monday since that is the traditional day for serving/eating it in New Orleans.  This rich (and creamy) comfort food would be the perfect cure for someone “having a case of the Mondays….”